Accessibility links
Illegal Wreath 'Tippers' Look For Some Under-The-Table Green Wreaths are made from greens collected by "tippers," who snip about 14 or 15 inches off the limbs of fir trees. But Christmas wreaths are valuable enough to attract tree poachers, who cut limbs and even whole trees on private land. That means the wreath on your front door could contain stolen goods. 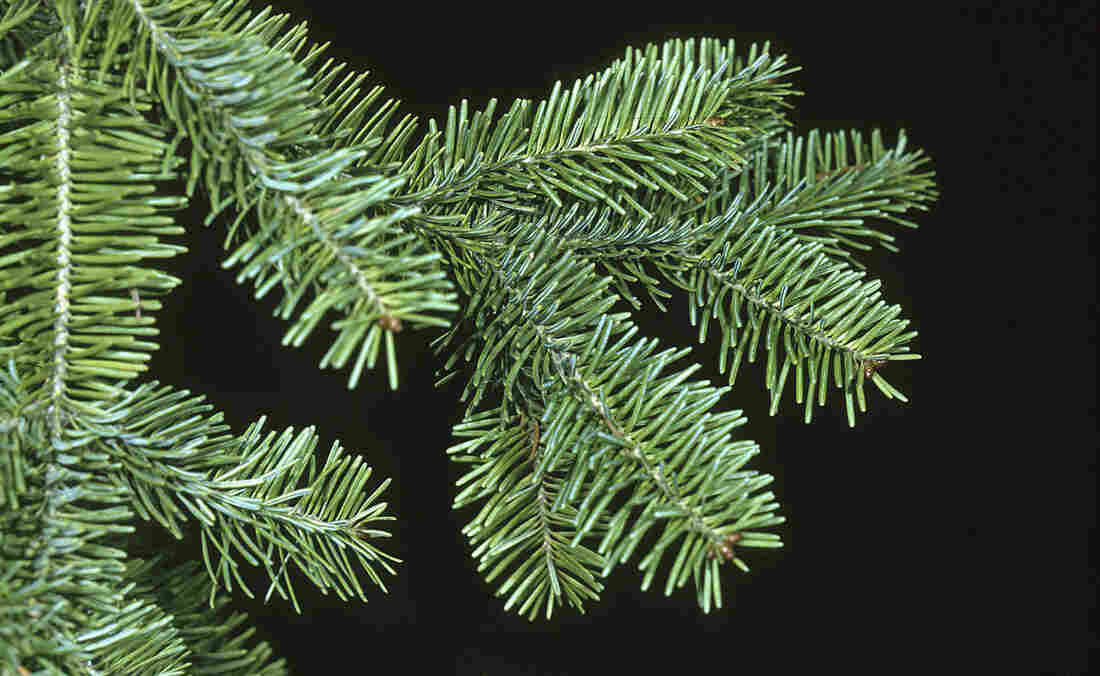 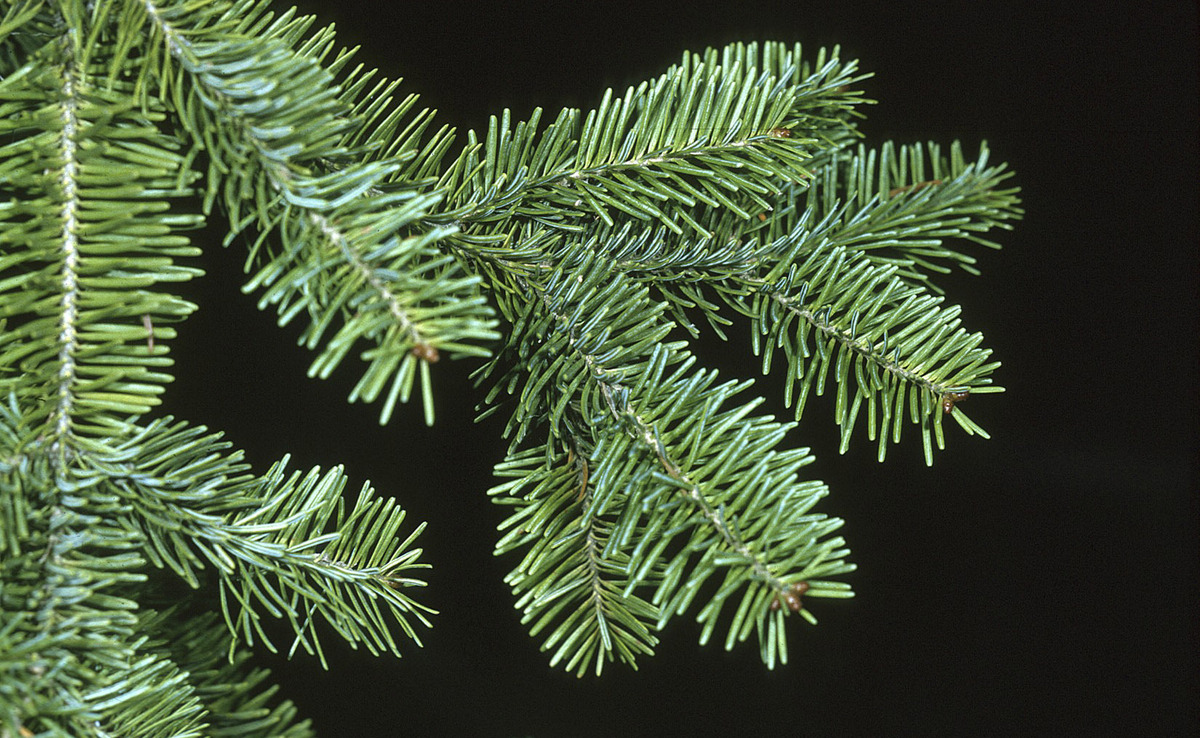 The tips of balsam fir trees are used to make Christmas wreaths.

That wreath on your front door could contain stolen goods.

The tips of fir trees used to make wreaths are collected by "tippers" and attract high prices — as well as poachers, who cut limbs and even whole trees on private land.

The Christmas greens industry is estimated to be worth tens of millions of dollars. But like other cottage industries, no one's really counting. Anyone with a desire to make some money can take part — on or under the table. And that's become a problem for some woodlot owners trying to protect their trees.

"Some folks will take the entire limb, and that's what the landowners don't really like, to strip the tree. Just take the tips, and then you'll have two grow back for every one," says Maine tipper Wanda Pinkham. Pinkham breaks about 14 or 15 inches off the limbs.

Pinkham has permission from a landowner to harvest her tips, but countless others don't bother to ask. From late October to mid-December, Maine forest rangers like Courtney Hammond are kept busy each day busting trespassers and confiscating ill-gotten greens. 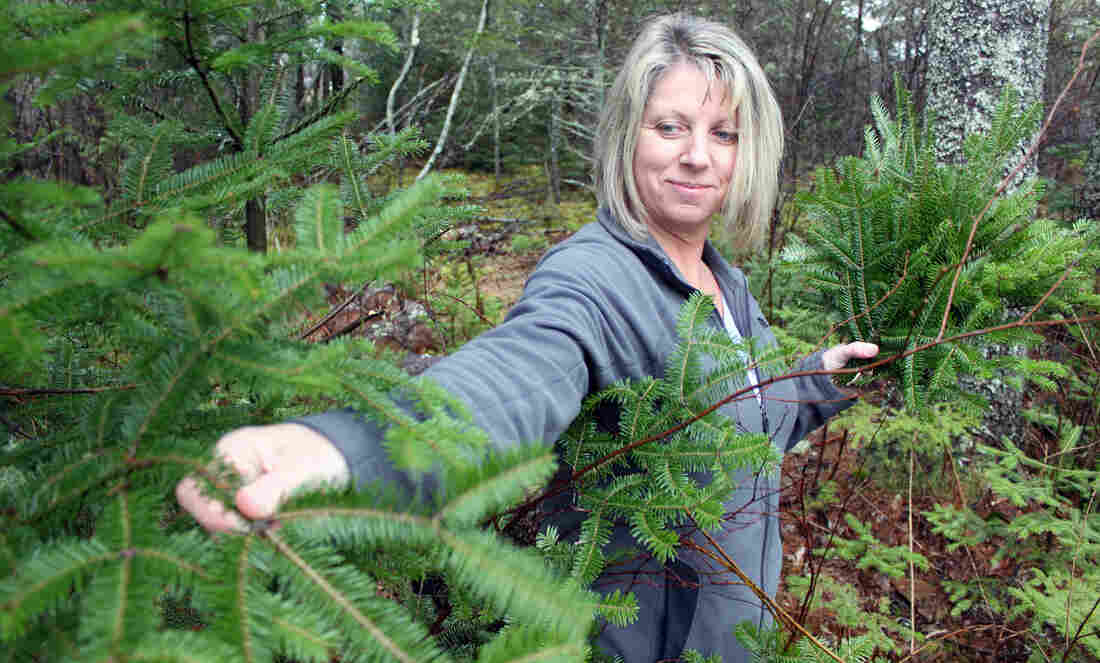 Wanda Pinkham pinches tips off a balsam fir to fashion into Christmas wreaths. Pinkham has permission from a landowner to harvest tips, but others don't bother to ask. Nick Woodward/MPBN hide caption 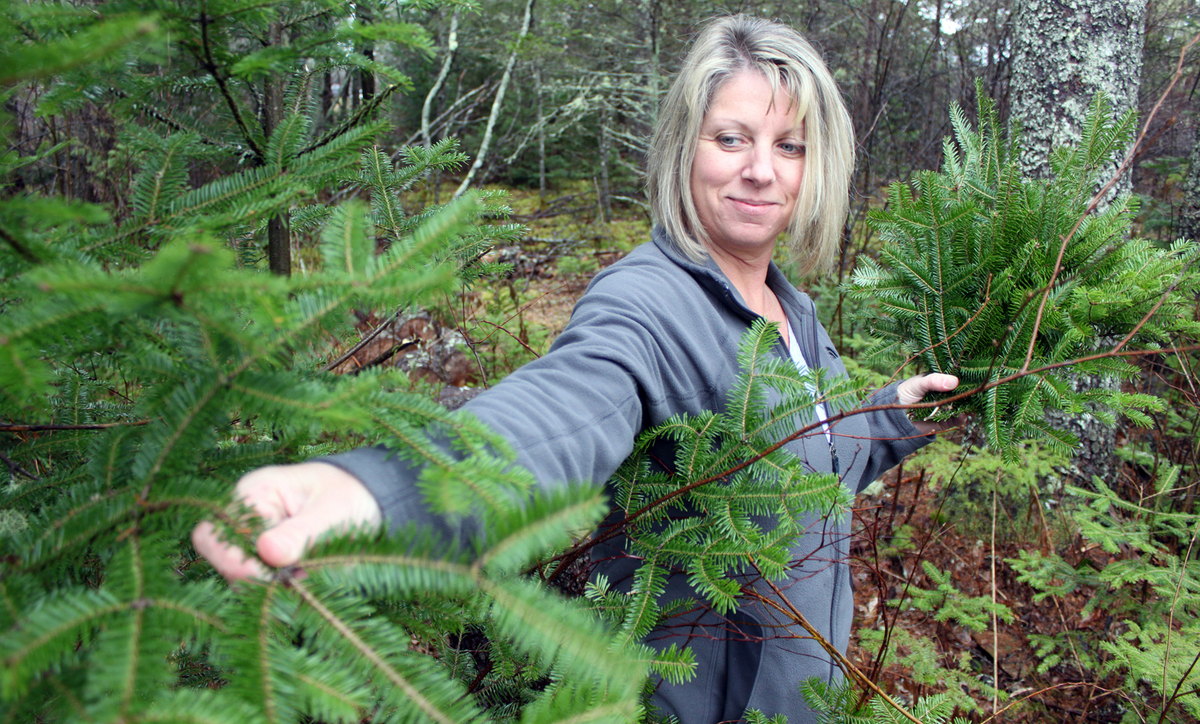 Wanda Pinkham pinches tips off a balsam fir to fashion into Christmas wreaths. Pinkham has permission from a landowner to harvest tips, but others don't bother to ask.

And they're damaging forests, he says, plucking limbs bald and even cutting down whole trees so they can sell a lot of tips at once to the area's big wreath makers. A hardworking person can make between $5,000 and $10,000 in a season of tipping. And in some rural areas, there really isn't much else in the way of winter employment.

White House Invites All To 'Gather Around' A Holiday Tradition

Whitney Wreath in eastern Maine is one of the biggest mail-order balsam fir wreath companies in the U.S., supplying retailers like L.L. Bean and QVC. It will employ about 600 workers this season. As conveyor belts turn and forklifts zoom past, the smell is surprising for a factory; it's sweet and pristine — like a boreal forest.

Owner David Whitney will ship up to 12 tractor-trailer loads of wreaths each day during the Christmas season, and he'll buy tens of thousands of pounds of fir tips from hundreds of independent harvesters.

"Our tippers have to have a permit in order to sell to us," he says.

Whitney, who started as a tipper himself, says illegal tipping is a problem that plagues the industry. But he says he's known most of his suppliers all his life, and he knows exactly where his fir comes from.

But forest officials like Hammond say not every retailer is likely to be so scrupulous. And for every thousand pounds of poached greens they confiscate, several thousand are probably slipping past and could wind up almost anywhere — possibly even on a door near you.