Accessibility links
To Get Olympic Snow, Machines Give Nature A Nudge The 2014 Winter Olympics will unfold in a resort town on the relatively warm Black Sea — a testament to how far man-made snow has come in recent years. 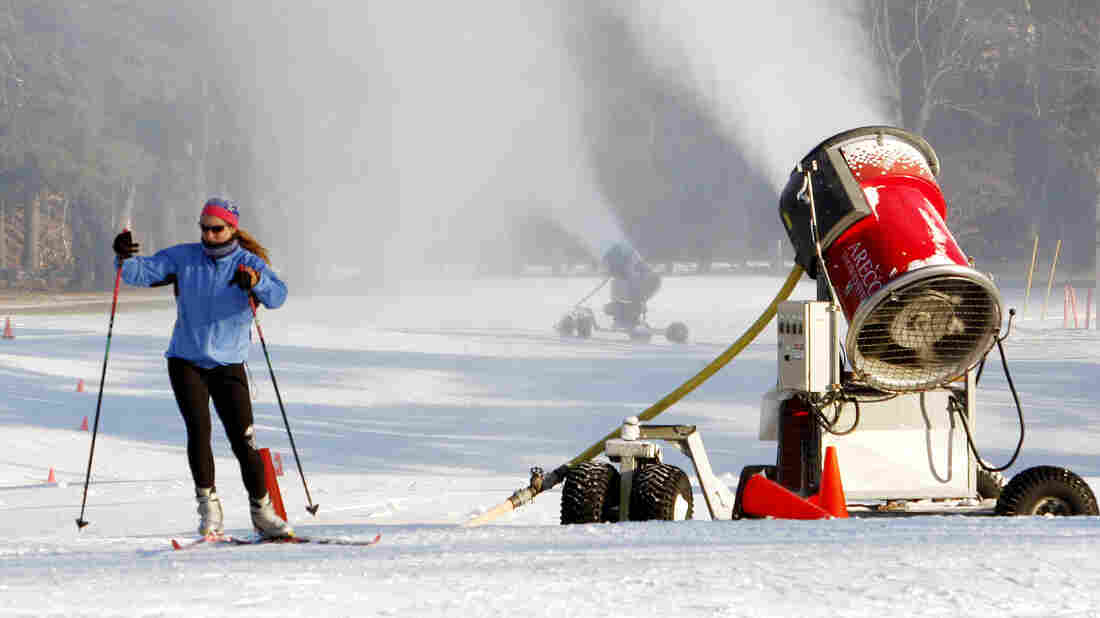 A skier glides past a snow-making machine pumping out snow in Weston, Mass., in 2010. Bill Sikes/AP hide caption 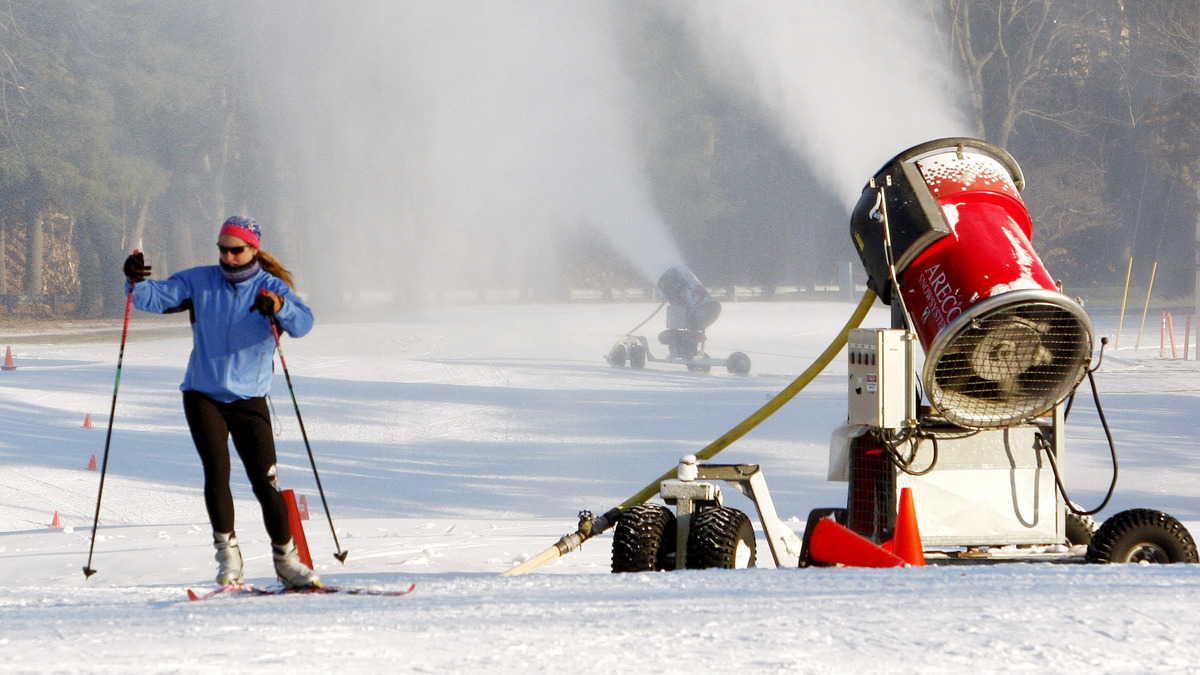 A skier glides past a snow-making machine pumping out snow in Weston, Mass., in 2010.

In Russia, organizers of the 2014 Winter Olympics have called on dozens of shamans to pray for snow. But the centerpiece of the Olympic snow strategy is man-made: a massive system that features more than 550 snow-making machines.

Sochi, Russia, which is hosting the Olympics, is a resort town on the relatively warm Black Sea. There are beaches and palm trees. The Alpine events will be held on a mountain just 30 minutes away, where last February it was raining, not snowing.

But while snow is necessary for skiing and snowboarding, it doesn't necessarily have to fall from the sky, says Rick Kahl, editor of Ski Area Management magazine, a trade publication for resorts.

"The whole technology of snow-making has reached a point where it's possible to hold an event like this at Sochi and not have to really worry too much about whether or not there's a lot of natural snow," Kahl says.

People first started trying to make snow commercially in the 1950s, by spraying cold water into cold air and hoping the water droplets would freeze on the way down. The snow-making industry didn't really get going until the early 1970s — and even then it was still pretty hit and miss. It was a discovery in an unexpected place that kicked artificial-snow making into high gear.

In 1975, Steve Lindow, a graduate student in plant pathology, was studying a bacterium that causes frost damage in plants. Lindow found that the bacteria gave the water a catalyst, something for the molecules to attach to and form ice crystals.

Now a professor at the University of California, Berkeley, Lindow demonstrates how this common bacterium helps ice form. He has a test tube with supercooled water in it, but it doesn't turn to ice — until he drops in the bacteria. When they're added to the test tube, the water seems to magically form ice.

And it works every time, like something out of a Kurt Vonnegut novel, instantly turning the water to ice. For the purposes of snow-making, adding the bacteria to water means snow can be made more efficiently and at relatively warmer — though still freezing — temperatures. And resorts all over the world started doing just that.

100 Days To The Sochi Olympics: Some Key Things To Know

Still, snow-making was an imprecise art.

Barrett Burghard, the director of snow services at Heavenly Mountain Resort in South Lake Tahoe, has been making snow for 26 years.

"When I started, we'd go up on the hill with a thermometer and we'd go around on a truck or snowmobiles and see where it was cold enough to make snow," Burghard recalls.

Burghard chuckles when he thinks back on those early days, because now he oversees a state-of-the-art automated snow-making system.

Each of his resort's latest, greatest fan guns monitors the temperature and humidity around it and can start up automatically when a snow-making sweet spot strikes. No bacteria added here. The machines break the water up into droplets that become artificial snowflakes.

Burghard demonstrates how one of the fan guns works, firing it up with his smartphone. But when it comes time for the water to turn on, the snow machine refuses to cooperate because it's warm outside. The machine is too smart. So, Burghard walks up to do a manual override. 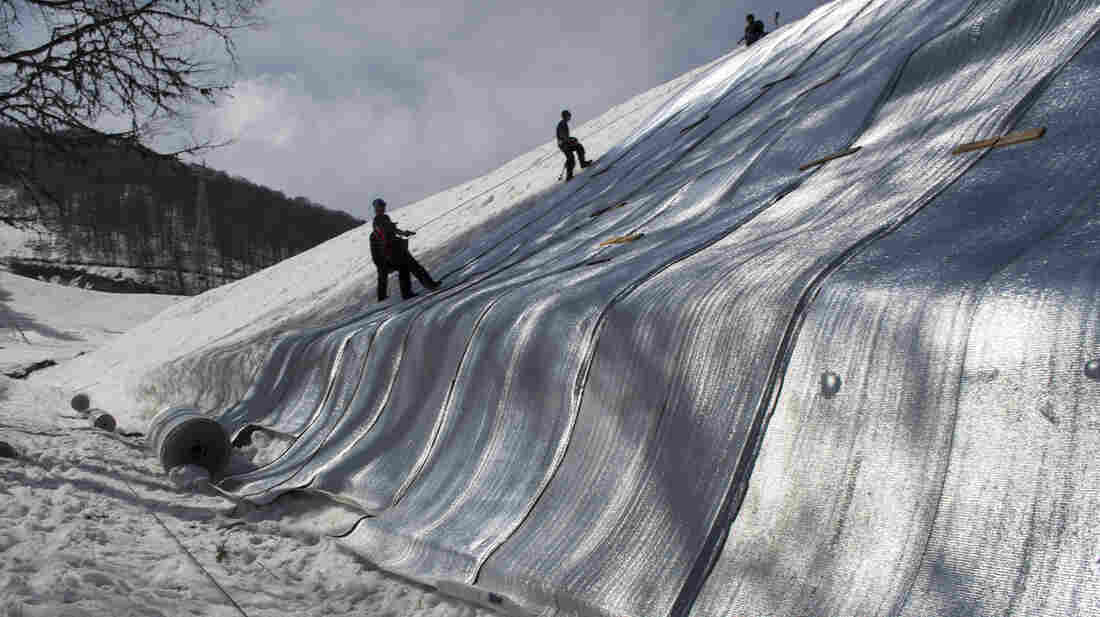 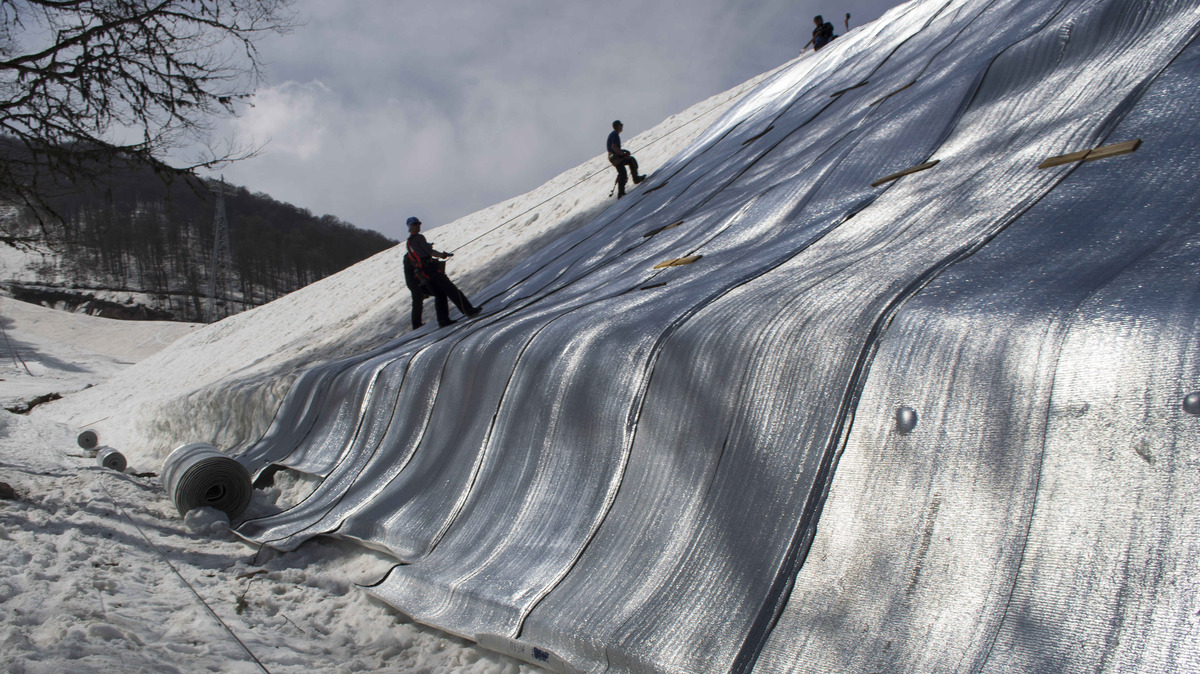 Ski resort employees in Sochi, Russia, scale down a pile of snow covered by insulated fabric.

"You can see now the snow is blowing out of the gun out onto the run," he says. Then he concedes: "It would be snow if it wasn't 60 degrees."

Water rains down on the ground below in a fine mist. Machines like these dot the mountainside at Rosa Khutor in Russia, which will host many of the snow sports at the Winter Games.

"There is a significantly powerful snow-making system there," says Joe VanderKelen, president of SMI Snowmakers in Midland, Mich.

SMI Snowmakers was one of the companies that built the Rosa Khutor snow-making system from scratch, including two man-made lakes used to pump water. VanderKelen says the system constantly adjusts to weather conditions.

"If they do see a cold snap coming in, even if it's only for a few hours, they can go ahead and start more than 100 machines and get the pumping plant going all within, say, a matter of minutes," VanderKelen says.

And if all of that fails, Olympics organizers have stockpiled massive amounts of snow from last winter, stored under insulated blankets and ready to spread on mountainsides like frosting.