Accessibility links
Pensions Become Less Certain For Government Workers Governments at all levels are trying to save money by scaling back retirement benefits. Public employees may still end up with more generous plans than their private sector counterparts, but the days of feeling totally secure about their pension income may be numbered. 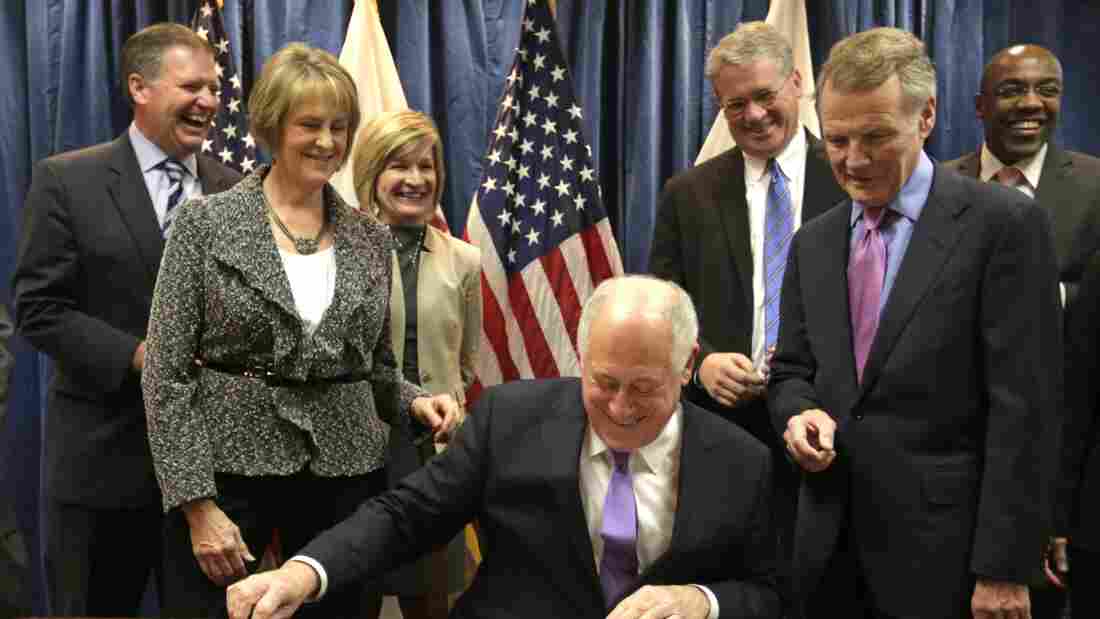 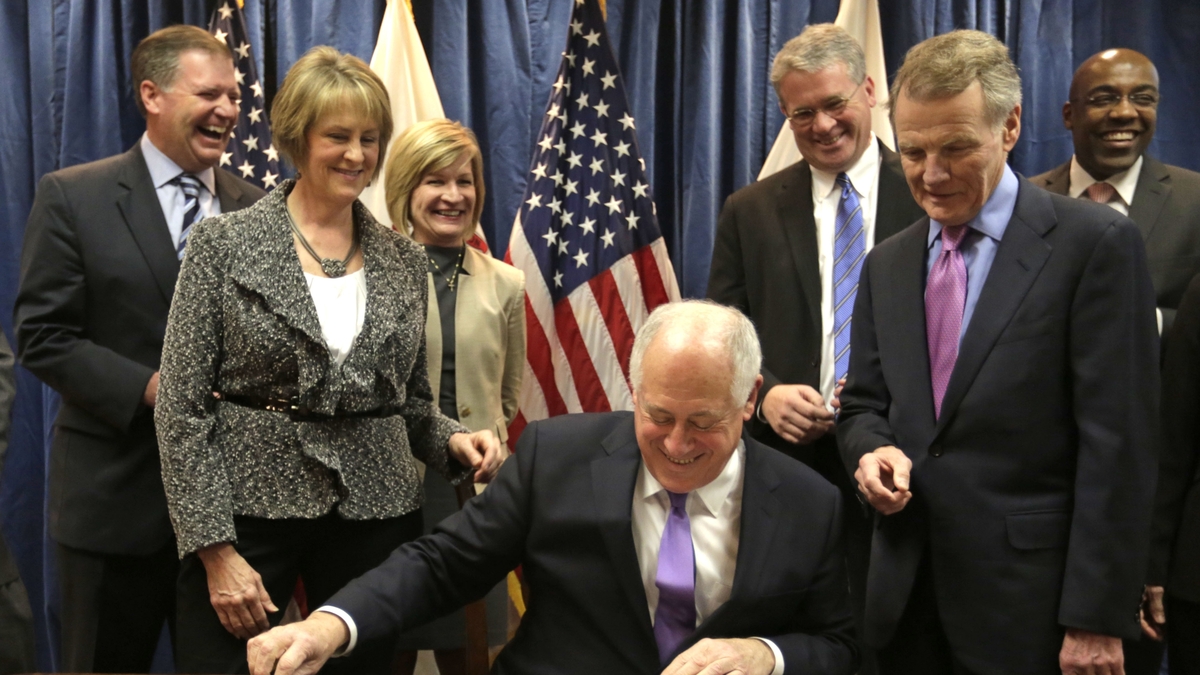 Federal workers have reason to be nervous. The budget agreement announced Tuesday — if it passes — would raise revenue by making employees contribute more toward their pensions.

It's part of a trend. Governments at all levels have been cutting back on pension benefits in recent years, in an attempt to fix funding problems caused by the recession and years of fiscal mismanagement.

In many cases, states and localities have made benefits less generous. But that has, for the most part, only affected newly hired workers.

Last week, Illinois changed its pension law, taking away cost-of-living increases for current workers and retirees. The law passed in tandem with a ruling by a federal bankruptcy judge that Detroit could cut benefits promised to already retired city employees.

That ruling will be appealed. Until now, pensions that had already been earned had been considered sacrosanct under both federal and many state laws.

"We'll see this unrolling and unspooling, in my view, all the way to the Supreme Court," says Frank Shafroth, director of the Center for State and Local Government Leadership at George Mason University.

Even as the legal playing field remains uncertain, the inability of many governments to keep their pension promises will lead to more political battles, including a California ballot measure next year that would allow cities to cut retirement benefits.

"Any kind of changes will be difficult for our employees," says San Jose Mayor Chuck Reed, who is spearheading the measure, "but it's much better to ask our employees to adjust their future expectations rather than risk seeing their accrued benefits slashed, as has happened in bankrupt cities."

Because pensions are covered both by a federal retirement law known as ERISA and by many state constitutions, government workers have viewed the size of their promised pension payments as inviolable.

At least, they felt certain until now. Some states and municipalities have had a terrible track record in terms of making needed annual payments into their pension funds, but workers have always been convinced that governments would be legally required to make good on the retirement benefits they had already earned.

"The bitter irony for public workers is that, in some places like Illinois and New Jersey, the unions actually sued the employers because they weren't putting the money away," says Steve Kreisberg, head of collective bargaining for the American Federation of State, County and Municipal Employees, the union known as AFSCME.

They didn't get much sympathy for their complaints that pension plans were often underfunded by billions of dollars.

Now that some governments have concluded that they don't have the money to pay, it may be too late.

Not Putting Enough Away

That's why numerous states and localities have changed their retirement plans. Traditionally, most government workers — who are often not eligible for Social Security — have received pensions. Upon retirement, they would get a fixed amount each month, based on formulas that took into account their salary levels and amount of time on the job.

Now, many governments are putting employees — at least newcomers — into plans that resemble 401(k) accounts. These are savings plans for retirement that do not guarantee a set income.

Most private companies have long since shifted workers into such plans. They haven't always been a raging success, though. The problem is that people often don't save enough.

Fidelity Investments recently announced that average balances had hit record highs, thanks to the rising stock market. But overall, the average amount people who are about to retire have saved is about $120,000.

That's a good chunk of change, but won't stretch far enough to cover retirements of 15 to 20 years.

"You've got potentially a whole generation coming down the road that's going to live much longer than other generations, and they're going to be desperately poor," Shafroth says.

Since they are coming to the game later than private companies, governments have been able to learn from mistakes in designing new plans, says J.P. Aubry, associate state and local finance director with the Center for Retirement Research at Boston College.

Employees in some plans can be auto-enrolled and have their contributions automatically increase as they earn more. Even if they don't put in much themselves, they can receive fixed amounts from their employers.

"If you correct those issues and you put in enough money, 401(k)'s can provide as much money as pensions," Aubry says.

They also offer more flexibility and portability to workers who aren't going to stay in their jobs for years. An earlier generation of government employees often stayed in place for decades, but today's younger workers will often slide into new positions before becoming fully vested in traditional pension plans.

Because of the decision in Detroit and other factors — including political pressures — government workers can no longer take it for granted that their promised pensions will be waiting for them, says Scott Pattison, executive director of the National Association of State Budget Officers.

It's harder, at least politically, to justify guaranteed retirement incomes for former government employees when so few workers in the private sector enjoy the same certainty, he says.

And now government workers have learned that their benefits will not necessarily be given blanket protection by the courts.

"Nothing's guaranteed and they have to be worried about the solvency of their pension programs as we go forward," Pattison says.

Governments, as employers, are going to need more flexibility, argues Kim Rueben, a state and local finance expert at the Urban Institute.

Many governments traditionally have done a bad job of taking pension costs seriously. When times were good, they could afford to increase retirement benefits. When times were bad, they sometimes increased pension benefits in lieu of giving raises, because those costs seemed so far off.

All that is changing. The bill has come due. The fighting about who has to bear the cost of underfunded pension plans is only intensifying.

Government workers and governments themselves, as adversarial as they might be about who ultimately pays, should recognize that their fortunes are inextricably tied together, says James Spiotto, a municipal bankruptcy attorney in Chicago.

If retirement benefits are cut too much, that undermines the ability of government workers to pay their rent and otherwise contribute to the economic well-being of their cities or states. But if other programs are cut too much to pay for pensions, that would harm jurisdictions as well.

"If you don't reinvest in the municipality, if you don't stimulate the economy, you're not going to have the revenue to meet those pension promises," Spiotto says.