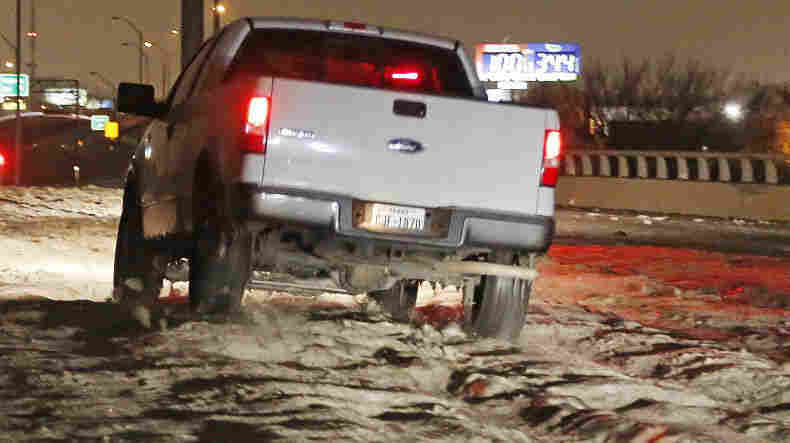 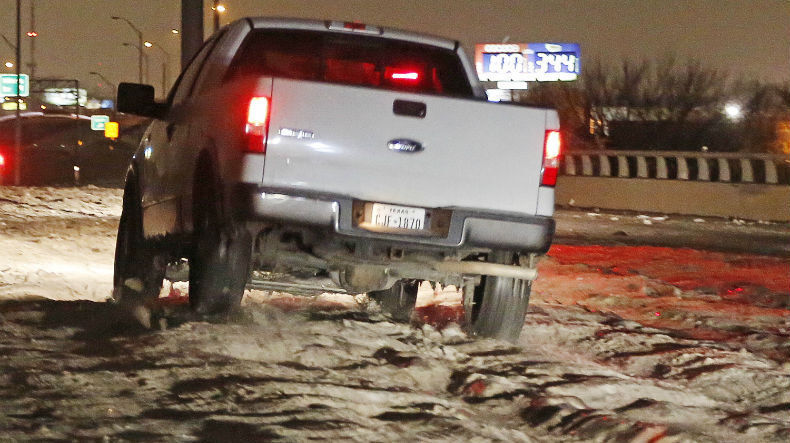 Cobblestone ice has made travel downright dangerous. Over the weekend, Ross Hailey of the Fort Worth Star-Telegram captured this truck driving over cobblestone ice in Haltom City.

Not if you've had to drive through it.

So what is it?

Ryan LaFontaine of the Texas Department of Transportation says cobblestone ice is a combination of ice accumulation and sand laid down by TxDOT and city trucks — which traffic compresses together to form a cobblestone-type surface, a thick layer of frozen ruts and potholes. In some places, it's several inches deep.

It's superbumpy ice that jolts you as you drive across it.

It doesn't help matters that the ice has been melting and refreezing.

LaFontaine says it's not easy to get rid of it.

"It has to be kind of busted up and become a slushy substance in order for us to plow it to the side," he said.

TxDOT crews from the Dallas and Tarrant regions are out breaking up and removing as much of the cobblestone ice as they can during the day before it freezes up again at night.

Many normal snowplows have had problems removing the ice. So TxDOT has had to bring in motor graders from across the state to chew through the thick, stubborn stuff.

A tough time for truck drivers

Franchester Smith, a trucker, has been stuck in the ice at the Love's truck spot in Denton. She drove in from Atlanta. She's ready to move on.

Cobblestone ice, she says, is the worst.

"You got all these dents," Smith said. "It just makes it really bad. Where you think it's a pothole, but it's not. It's all the ice and snow that froze over it. You're rolling over it and rolling over it."

Eduardo Ruvalcaba, another trucker, has been stuck at a truck stop, the Travel Center of America, on Interstate 35 north of Denton since Thursday.

"It's not pretty," he said. "There was a coach bus that lost a tire because it was getting beat up so bad. All the truckers, that's what they've been complaining — our equipment is taking a beating over this."

Jon Gandelman, who's been driving trucks for 15 years, says he's used to winter storms. Usually, you try to plow through. But with these road conditions? It's another story. He arrived in Denton after being stuck in Oklahoma a couple of days. What's he been doing?

"A lot of sitting, a lot of ice. I'm from California and we chain up all the time to go across the mountain passes. That's just snow. When it's ice, you don't go anywhere."

"Moguls for cars," is how Larry Mowry described it. Mowry's the chief meteorologist at KTVT (Channel 11).