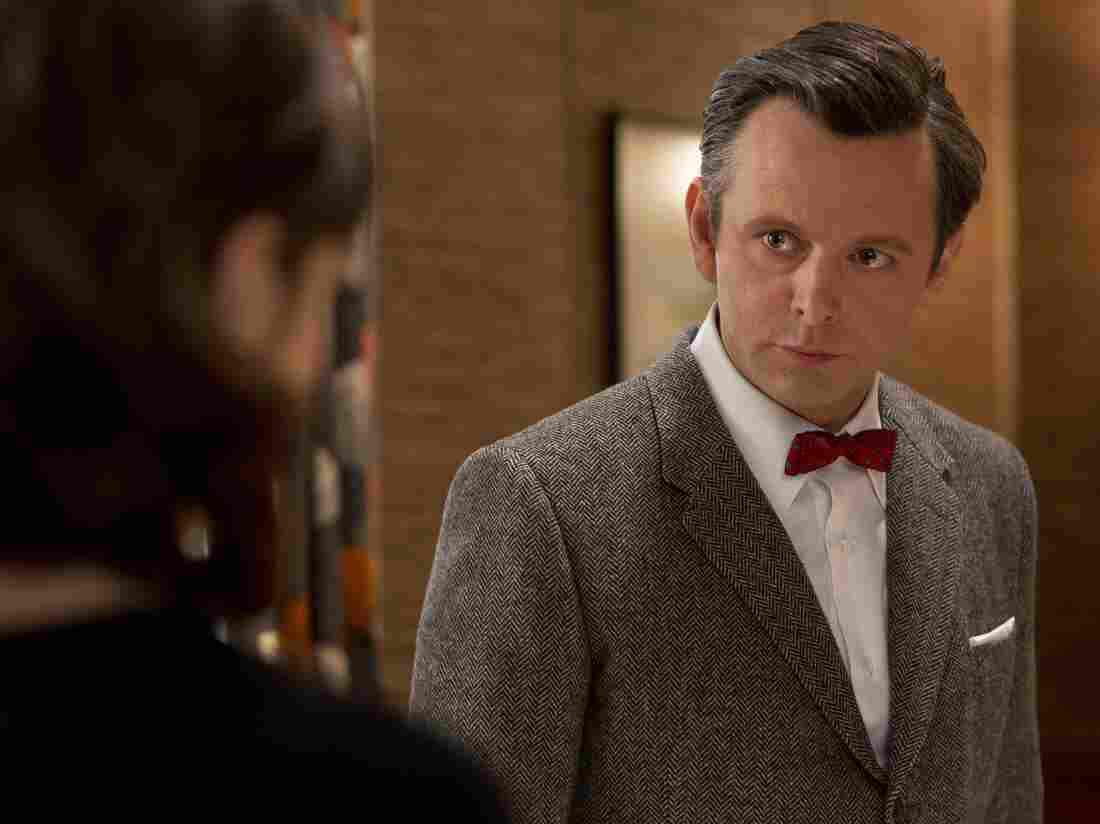 In the Showtime drama — which airs its finale this Sunday — Sheen plays groundbreaking sex researcher William Masters, who, along with his associate Virginia Johnson, in the 1950s, began researching the physiological impact of sex. They studied real men and women in stages of sexual arousal, with electrodes attached to their bodies to capture physical changes.

Some of Sheen's most memorable roles have been playing real people. He was a highly regarded theater actor in England, where he played Mozart and Caligula among others. He got into movies and earned good reviews playing Prime Minister Tony Blair in The Queen and two other films. And he played the late British journalist David Frost in the stage and screen versions of Frost/Nixon. Sheen has also had his share of fictional roles, including a guest appearance on several episodes of the NBC series 30 Rock.

On the template for Masters of Sex

Michelle Ashford, who created the series, based it on the book by Thomas Maier about Bill [Masters] and Virginia [Johnson], and so what's useful ... is that you've got this sort of template — the actual events of their life, the facts of their life — and that we constantly draw on that, that's absolutely the spine of what we're doing. But at the same time, [their] relationship [was] very secretive and private ... so even though you can look at the facts of their life ... that's so not the full story, which is great for us because then, by necessity, you have to explore, you have to invent within that framework. I think it's a perfect combination of actual factual accuracy and invention.

On filming the sex research scenes

More On Masters Of Sex

The Most Shocking Moments Are True In 'Masters Of Sex'

[There are] scenes where we are having sex [yet] the whole idea is that it's separate of emotion and attraction and all of those things, it's just scientific — of course it can't be, it's impossible for it to be like that. So you have these two people [Masters and Johnson], or certainly this one person, Bill Masters, who is leading the experiment and trying not to show any emotion and that is a very peculiar thing to play as an actor. To be doing something that is usually, in a story, the most intimate thing, where you see desire, you see lust, you see attraction, you see all of those things ... you lose yourself in it. And here's a scene where we're not even supposed to look at each other particularly as it's happening and I'm supposed to say "orgasm" as I orgasm ... and that is a very peculiar thing to act, but it's sort of brilliant.

In a lot of his work [The Queen, The Deal, Frost/Nixon] ... there are often two characters pitted against each other. ... One of them I always think of as being kind of the mythological hero going into the maze, like Perseus ... and the other character is the monster, is the thing at the heart of the labyrinth. We follow the story of the hero, as an audience that's our point of contact and that's the main thrust of the story, but we're fascinated and compelled, and drawn to the monster, who we know less about, who is more enigmatic, who's more hidden.

Often, the monster part is the supporting part and it's the hero who is the hero, literally. But our fascination with the monster is such that that's the character who looms largest in our consciousness. ... Peter Morgan [takes] figures we're so familiar with, and yet not — figures who have become almost two-dimensional in our minds and have become huge ... and then fleshing them out, making them three-dimensional.

On playing David Frost in Frost/Nixon 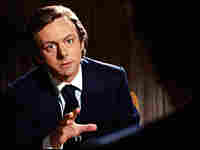 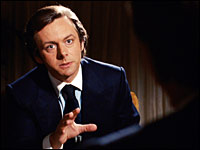 He is someone who is so, so very familiar to a British audience. The problem you have when you're playing someone who is so familiar to an audience is that the first thing their expectation brings is, "Oh, is he going to look like him? Is he going to sound like him?" That kind of thing. So you do have to meet that, you can't ignore that. ... The point is to try and take that out of the equation as soon as possible so that the audience can just focus on what's going on underneath — because otherwise people might think it's a brilliant impersonation but they're not following the story.

... The engine of [Frost's] character for me was the combination of that on the surface he seemed like his reputation was of being a sort of playboy, he had this kind of glamorous life, and that he was quite superficial ... and that he was very much a sort of a people pleaser ... but underneath he was very driven, very ambitious, very hardworking man. In some ways, you could say ruthless as well. And it's the interplay of those two sides of him that is so interesting to explore.

On his role as Wesley Snipes on 30 Rock

It has happened to me a couple of times where I've been a huge fan of something and then get the opportunity to be in it. ... [It was] also quite intimidating to walk into something where — talk about ensembles! — they're a crack ensemble and so smart, and so in the groove of what they're doing. ... But what was great is that Tina [Fey] starts to kind of write for you as you start working with her — which was a little disturbing as my character got more and more bizarre, weird and outlandish the more she actually knew me.