Accessibility links
Megatons To Megawatts: Russian Warheads Fuel U.S. Power Plants Once the Cold War ended, much of Russia's surplus uranium from thousands of decommissioned weapons wound up in crumbling military facilities. In 1993, the U.S. Department of Energy made a deal to have the material converted to fuel for U.S. power plants. The last shipment arrives today. 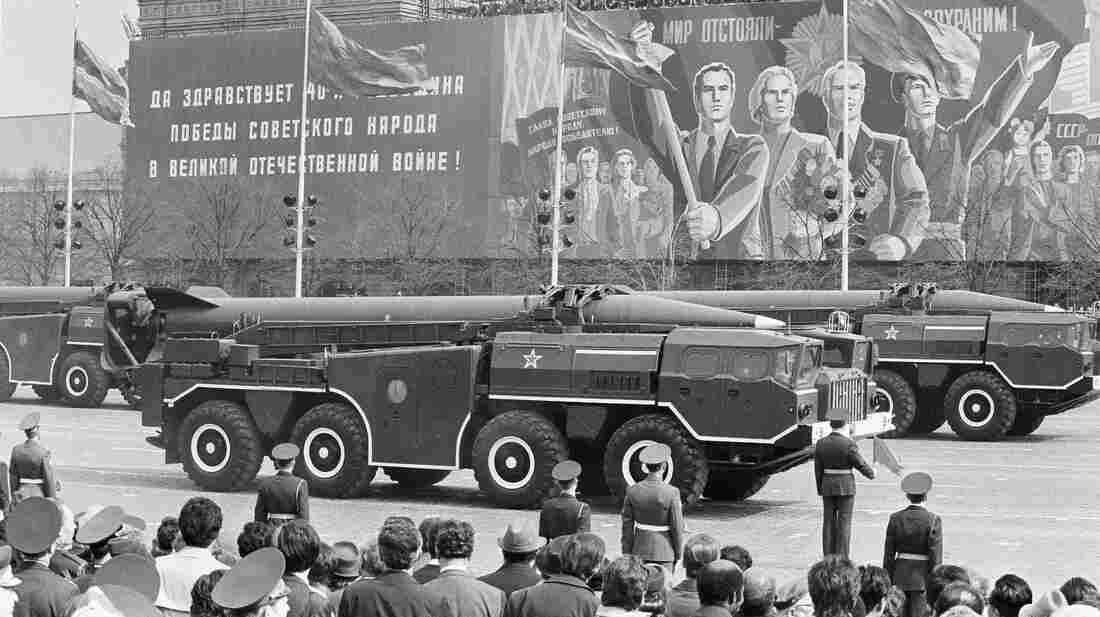 A Soviet SS-21 tactical short-range nuclear missile is shown for the first time in Red Square, at the Victory Day parade in Moscow, Russia on May 9, 1985. Associated Press hide caption 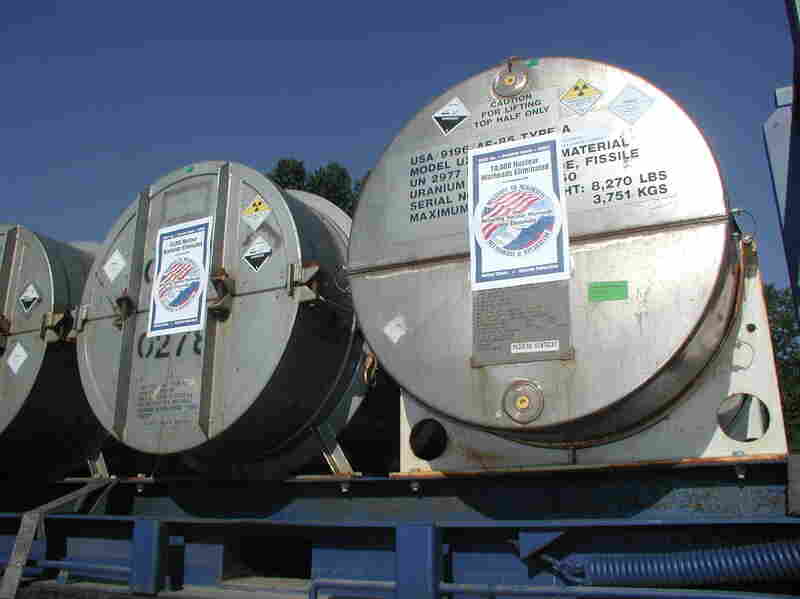 Inside these cylinders lies uranium that was once part of a Soviet nuclear weapon. Today it's being used in the US as fuel for commercial nuclear reactors. Courtesy of USEC hide caption

Here's a remarkable fact: For the past two decades, 10 percent of all the electricity consumed in the United States has come from Russian nuclear warheads.

It was all part of a deal struck at the end of the Cold War. That deal wraps up today, when the final shipment of fuel arrives at a U.S. facility.

The origins of the plan lie in the early 1990s. At the time, Philip Sewell was working for the U.S. Department of Energy. The Soviet Union had just disintegrated, and Sewell's job was to find ways to collaborate with the former adversaries.

In practice, this involved driving out into the Russian countryside, to military facilities that weren't even on the map. When Sewell got there, what he saw wasn't pretty.

"Windows were broken, gates were not locked, and there were very few people around," Sewell says.

But inside these crumbling buildings, the Russian government stored the uranium from thousands of decommissioned nuclear weapons. It seemed like practically anyone could walk off with stuff for a bomb.

Sewell and his colleagues wanted to get rid of this uranium. So they decided to try to persuade the Russians to sell their surplus to the U.S. After all, the stuff was just lying around.

Initially, the Russians refused. "It was a matter of pride, principle and patriotism," Sewell says. "Even though they didn't need that excess material, [and] they didn't have the money to protect it, they didn't want to let go of it."

But in the end they did let go. For one reason: money.

This is the only time in history when disarmament was actually profitable.

"Russia's nuclear industry badly needed the funding," says Anton Khlopkov, the director of the Center for Energy and Security Studies outside Moscow. He says Russia's nuclear complex had nearly a million workers who weren't getting paid a living wage.

So, in 1993 the deal was struck: The Russians would turn about 500 tons of bomb-grade uranium into nuclear fuel. The U.S. would buy it and sell it to commercial power plants here.

Khlopkov says it was a win-win. "This is the only time in history when disarmament was actually profitable," he says.

Very profitable. The Russians made around $17 billion. Sewell's government office was spun off into a private company — the United States Enrichment Corporation — and made money from the deal too. And the U.S. power plants got the uranium at a good price.

But all good things must come to an end, says Matthew Bunn at Harvard University.

"Russia is a totally different place today than it was twenty years ago," Bunn says. "As the Russian government is fond of saying, they're 'no longer on their knees.' "

Still Bunn says this deal will go down in history as one of the greatest diplomatic achievements ever.

"I mean, think about it – 20,000 bombs' worth of nuclear material, destroyed forever," he says. "[Bombs that] will never threaten anybody ever again."

The last shipment arrives today at a US storage facility. It will be sold off to utilities in coming years. So when you turn on the lights, feel good. Your bulb may be powered by what was once a bomb.