Accessibility links
Movie Review - 'The Hobbit: The Desolation of Smaug' - Bilbo's Back, With More Baggage Than Ever Gandalf, the dwarves, and the titular hobbit continue their quest for the mountain in the second of Peter Jackson's three Lord of the Rings prequels. Martin Freeman, Ian McKellen, Orlando Bloom and Benedict Cumberbatch star. 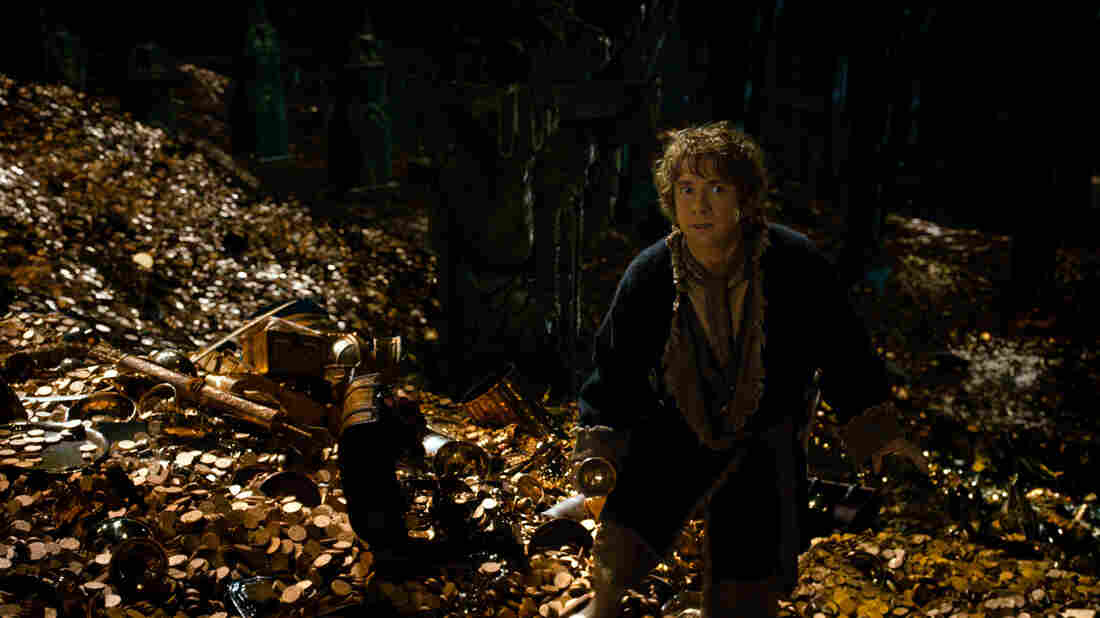 Bilbo Baggins (Martin Freeman) is back for the second installment of the Hobbit trilogy, this time actually spending some time with Smaug the dragon (voiced by Benedict Cumberbatch). Warner Bros. hide caption

Bilbo Baggins (Martin Freeman) is back for the second installment of the Hobbit trilogy, this time actually spending some time with Smaug the dragon (voiced by Benedict Cumberbatch).

The Hobbit: The Desolation of Smaug

Peter Jackson's decision to turn the single volume of The Hobbit into a three-film epic — with a total running time nearly as long as his adaptation of the Lord of the Rings trilogy — was met with considerable skepticism. Did Tolkien's relatively slight book really have enough story to justify stretching it out that much?

The second installment, The Desolation of Smaug, makes it clear that the three-chapter treatment has little to do with making adequate room to fully adapt Tolkien's story — or even, as some have argued, to include material from the original trilogy's considerable appendices. The extra time, it becomes increasingly clear, is primarily about the considerable embellishments devised by Jackson and his co-writers Fran Walsh and Philippa Boyens.

That isn't necessarily a bad thing. A little infidelity in the process of adaptation can make the material fresh for even the most fervent fans of a classic, and the skill with which this team employed strategic cuts, additions and composited characters in the original trilogy was part of what made Lord of the Rings work so well.

But as Bilbo Baggins (Martin Freeman), Gandalf (Ian McKellen) and the company of dwarves continue their quest to reach the Lonely Mountain, confront the dragon Smaug, and return Thorin Oakenshield (Richard Armitage) to his rightful role of King Under the Mountain, it becomes clear that the process of adapting the novel for the screen has mostly become one of padding the source material with extra battles, utterly unnecessary romantic subplots, and material culled from those appendices to give Gandalf more screen time after he leaves the primary quest. 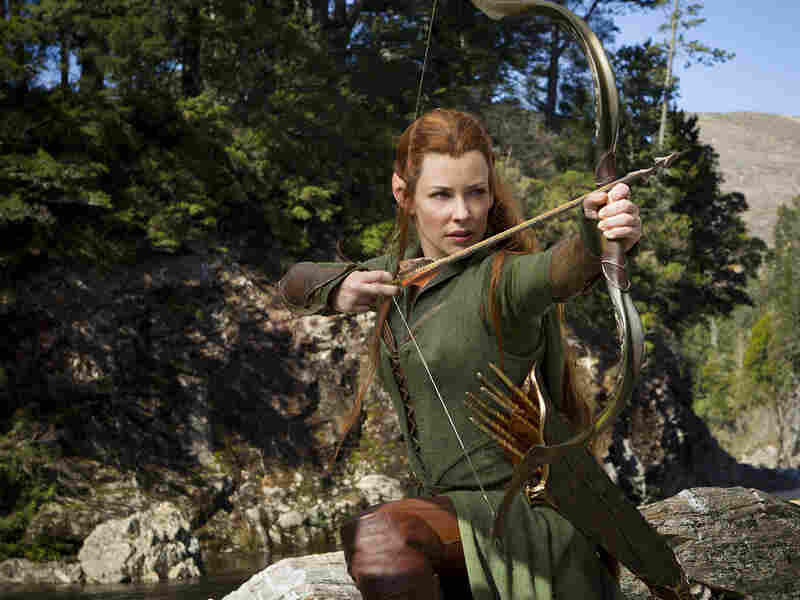 Among the additions the film makes to the original Hobbit story is Tauriel (Evangeline Lilly), a warrior and potential love interest for Legolas (Orlando Bloom). James Fisher/Warner Bros. hide caption 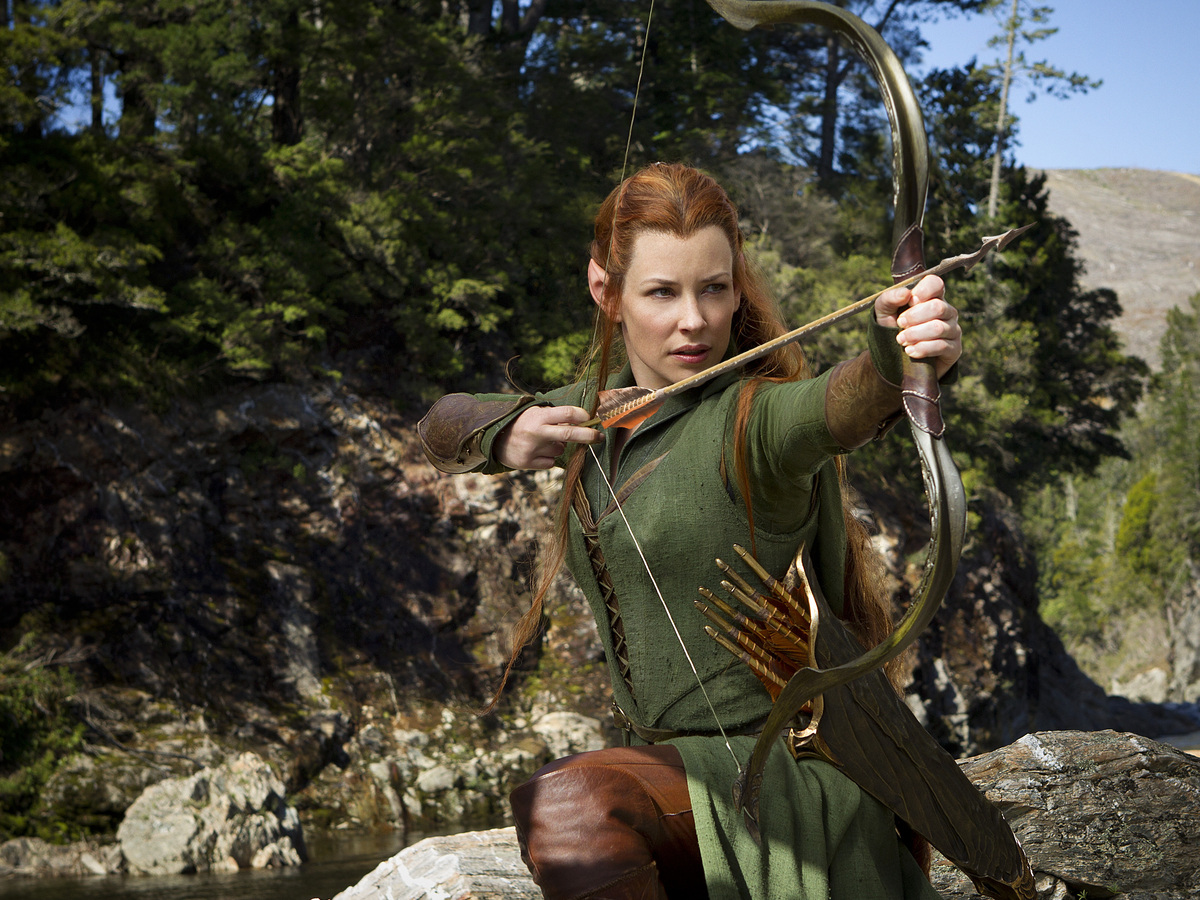 Among the additions the film makes to the original Hobbit story is Tauriel (Evangeline Lilly), a warrior and potential love interest for Legolas (Orlando Bloom).

This all essentially serves to distract from the fact that all that really happens in the film is that the company manages to eventually reach the mountain. Sure, they're waylaid in the elven realm of Mirkwood — and the human Lake Town — for a little while on the way. But there's no particular arc here, just nearly three hours of bludgeoning rising action, culminating in a battle sequence invented by the filmmakers to provide an artificial climax.

It often feels as if Jackson and company spent time focus-grouping the previous films, then inserting favorite bits where the source material lacks adequate fan service. So Legolas (Orlando Bloom) shows up here, firing arrows while skating dashingly through throngs of foes; we get a new female elven warrior and love-triangle corner in Tauriel (Evangeline Lilly); there's Morgul-weapon poisoning, kingsfoil pharmaceuticals, and orcs attacking whenever the director needs another action set piece. At some point, The Desolation of Smaug starts to feel like Peter Jackson as lounge act, serving up his greatest hits.

If we didn't know he was capable of so much better, the film might seem more passable. The action sequences are admittedly thrilling; the giant forest spiders here may be even more fearsome than Return of the King's Shelob. They're expertly choreographed, even if the barrel-ride river escape stretches the bounds of plausibility even for a fantasy film. And Jackson's penchant for dizzying camera movement and disorienting Dutch angles, along with the always stunning New-Zealand-as-Middle-Earth setting, still make for dazzling eye candy.

But the movie is at its best when Jackson dials down the bombast and goes for tension, or when he lets Martin Freeman's performance carry the day. Freeman simply gets the duality of hobbits, that nervous reticence hiding a deep well of bravery, better than anyone who's yet donned those hairy feet. Just as the first Hobbit film plateaued with Bilbo's game of riddles with Gollum, here the strongest scene is his interaction with the dragon Smaug, a cunning and beautifully rendered marriage of digital artistry and the seductively evil voice of Benedict Cumberbatch.

Unfortunately, moments like those are far too few, especially in a movie this long, and it often feels like the movie's title character is marginalized in his own story. Jackson wants to make The Hobbit exist on the same massive scale as his previous Tolkien adaptations, but the aesthetic of always more and always bigger tends to overshadow this diminutive hero.