Accessibility links
Newtown Parents Seek A Clearer Window Into Violent Behavior When Jeremy Richman and Jennifer Hensel lost their daughter in the Connecticut shooting, they couldn't understand why someone would do such a thing. In seeking an answer, they're funding research into the forces that increase a person's risk of aggression — and have also found a path to healing. 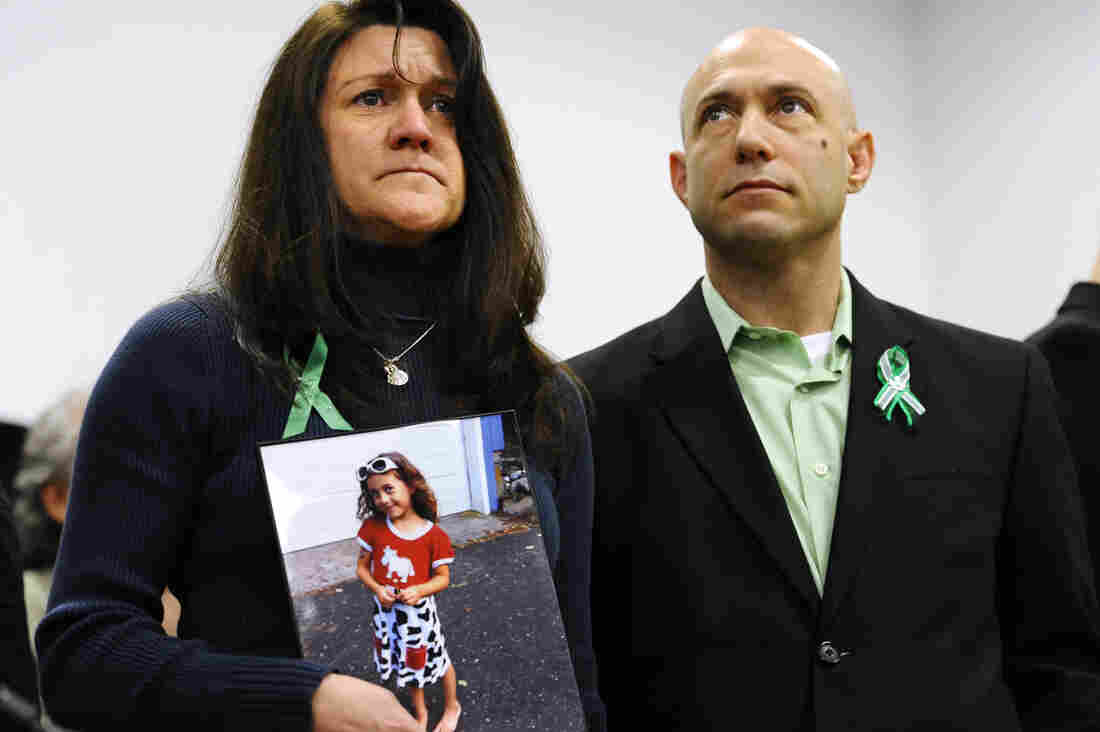 Jennifer Hensel and Jeremy Richman with a portrait of their daughter, Avielle Richman, at a news conference in Newtown, Conn., in January. The parents have created a foundation to fund research into the biochemical and environmental factors that drive violent behavior. Jessica Hill/AP hide caption 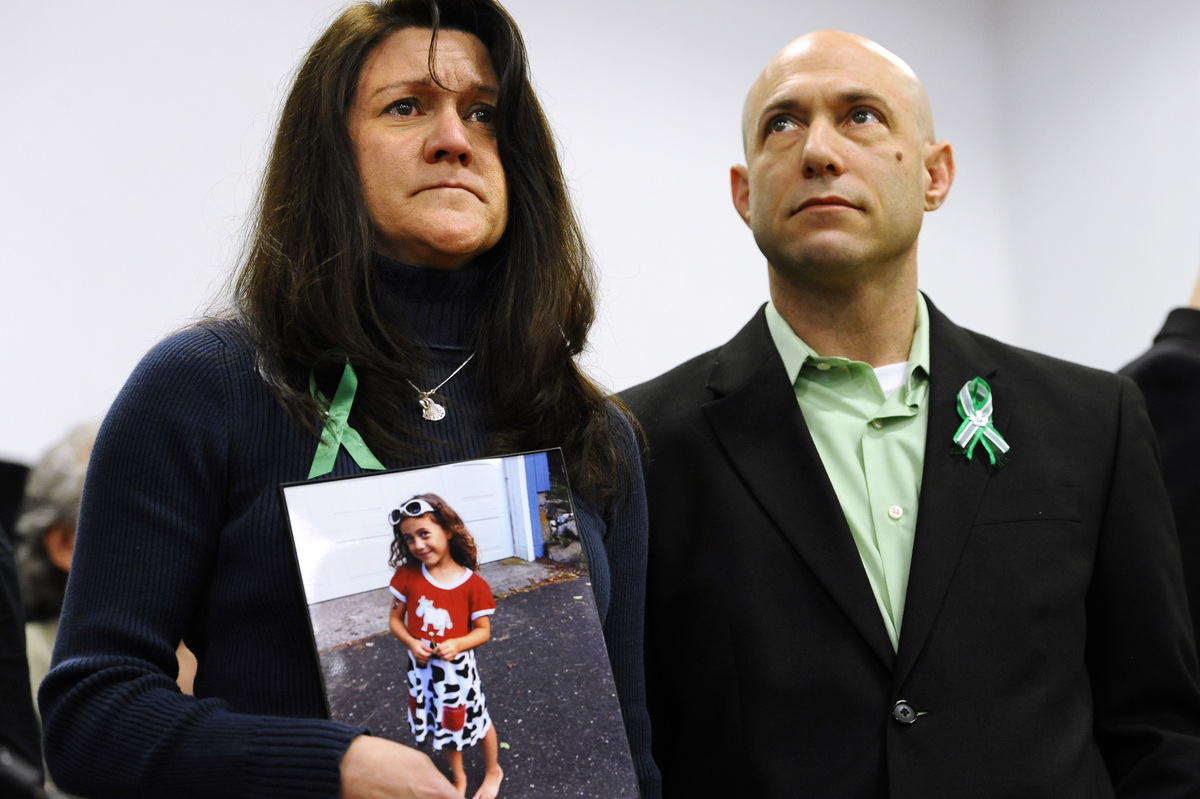 Jennifer Hensel and Jeremy Richman with a portrait of their daughter, Avielle Richman, at a news conference in Newtown, Conn., in January. The parents have created a foundation to fund research into the biochemical and environmental factors that drive violent behavior.

The shooting in Newtown, Conn., last December has left families of the 26 victims, most of them children, struggling to heal in different ways.

Jeremy Richman and Jennifer Hensel are one such family. They lost their only child, 6-year-old Avielle, in the shooting. In the year since, they've responded as any parents would: Asking why such a tragedy could have happened.

But they also responded as the two scientists they are: They immediately threw themselves into trying to answer the question. The foundation they've started is dedicated to supporting research into the forces that increase a person's risk of violence and aggression.

As much as they hope their work will help society avoid another tragedy, it's also helping them to heal and move on from their own loss.

'The Question Was Why'

Even before she was old enough to say it herself, Avielle Richman was totally into her name. She loved that no one else had it — and decided that everyone and everything else deserved a unique name, too.

"She named everything," Richman says. "She named our trees Maeve and Efford. And our gargoyles on the house, she named Grolig and Galen."

At home in Sandy Hook, Avielle's parents are surrounded by their late daughter's creativity, from the three identical baby blankets she named "Pink," "Blink" and "Basil" to her pet fish, "Khaihawana Punk."

The couple laugh just remembering the day Avielle gave the fish its name. Perhaps that's a sign of healing — that one year ou,t a memory can bring a laugh. But just as often, it doesn't.

"In my office there's a great triptych of her smiling and then busting out laughing because her brand new kitten was biting her feet," Richman says. "One minute it just busts me out laughing, and then the next minute, it just breaks my heart because I miss her so much." 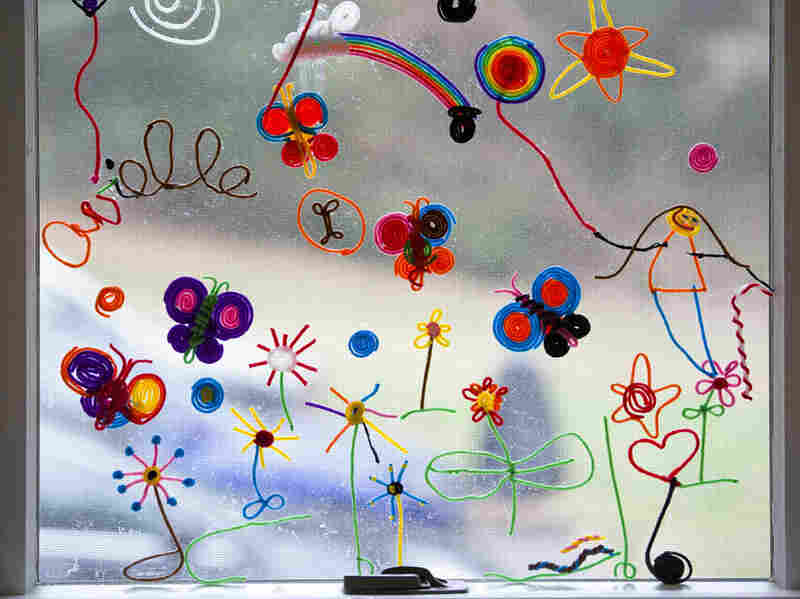 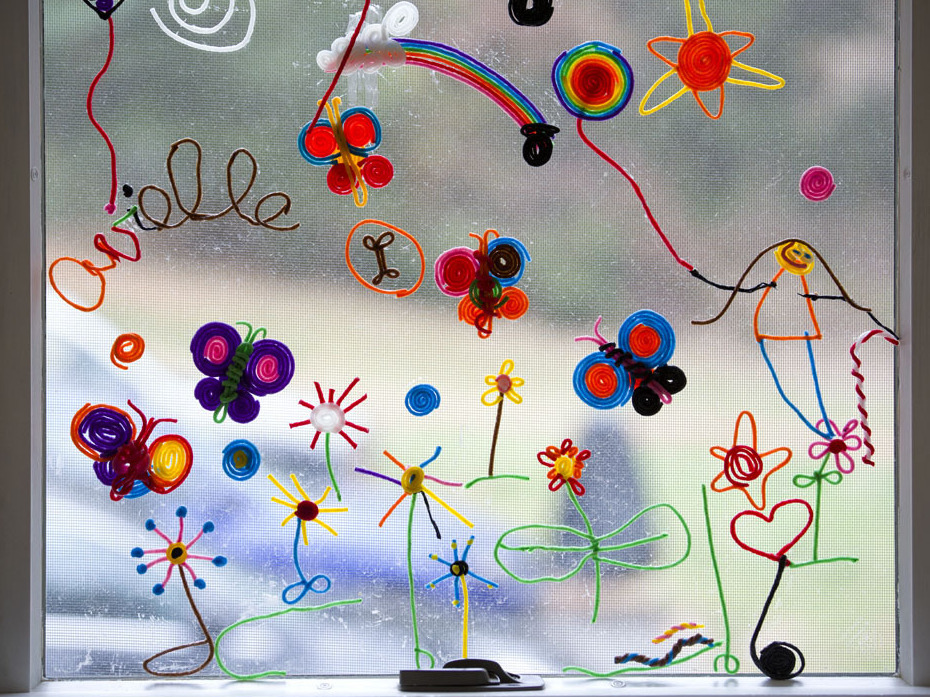 Avielle's artwork hangs on the walls and windows of Jeremy Richman and Jennifer Hensel's home.

The anniversary of the shooting, and the holidays, are relentless reminders to the couple of all they had and so suddenly lost. "A year ago we were going to go see the Christmas Spectacular at the Radio City Music Hall," Hensel says. "We were talking about going sledding, being with family for the holidays."

Then, like 25 other families, they found themselves tormented by the same question.

With his training in neuropsychopharmacology and her background in infectious disease, the couple is pushing for more integrated research — examining both nature and nurture — to understand the biochemical and external factors that drive violent behavior.

To that end, Richman and Hensel launched the Avielle Foundation, shortly after the shooting. "It is our responsibility to be outraged, to take action, to ensure this doesn't happen again," Richman said at a press conference in Connecticut in January. "With this foundation, it is our hope to honor our beautiful Avielle and others who have fallen to such senseless violence."

Understanding the underpinnings of violence, Richman and Hensel hope, will eventually lead to treatment for people with violent tendencies. The foundation's tagline, "You can imagine," is a nod, the couple say, to what's possible — and to the need for people to not turn away.

"Everywhere that we went in the beginning, people were all like, 'I can't imagine what you're going through. I can't imagine,' " Richman says. "But they are imagining it. That's the terror they're feeling when they say those words. And we need to imagine it. Because otherwise we can't drive change, innovation, ideas."

'A Reason To Get Out Of Bed Every Day'

Richman and Hensel dream of advances in brain imaging that might one day enable routine brain "checkups," much like the way doctors measure blood pressure. They've been meeting with lawmakers in Connecticut and Washington, D.C., as well as Vice President Joe Biden, to lobby for more awareness and training that they say could help identify those prone to violence, like the gunman at Sandy Hook and elsewhere.

Newtown Calls For 'Acts Of Kindness' On Shooting Anniversary

"The shooters were not in their right minds," Richman told one legislative committee earlier this year. "Upon reflection, those who crossed paths with these individuals consistently express the sentiment, 'There was always something not right about that guy.' "

Richman and Hensel's work is a means to an end, but also, they say, an end in itself.

"No question. We need a reason to get out of bed every day. And it's not so easy and so obvious to pull out of that despair," Richman says. 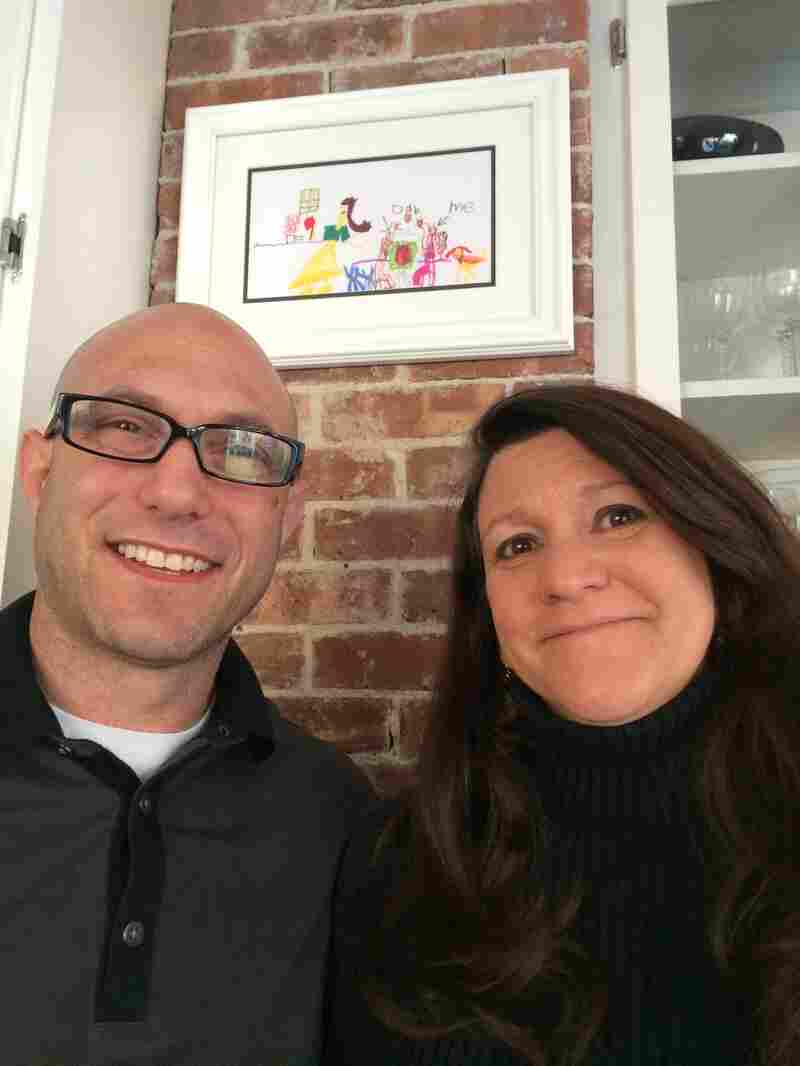 Jeremy Richman and Jennifer Hensel pose at their home with artwork from their daughter, Avielle. Richman says his daughter "was very happy and wanted everyone else to be, too." Tovia Smith/NPR hide caption

And while they feel lucky to have the language and lens of science to help them find answers, they're also quick to concede that there are questions science can never resolve, like, "Why Avielle?" or, "What if?"

"It's a circular path into nowhere. Spiraling, even, to a place that doesn't help," adds Hensel "It's not a place of beauty, I can tell you that, and it's not a place of hope, and that's where we have to move forward."

From California to Colorado and Connecticut, local fundraising events have brought in donations from $10 to tens of thousands for the foundation. The pair says the outpouring helps their healing — one example of what they call the "bits of beauty" they're constantly looking for as an antidote to their pain. "Anything that would blanket my brain with something good," says Hensel, "and this foundation does that for me."

Back home, a dog and two cats fill the house, as do many pieces of Avielle's artwork, framed and named, like, "The Life With Stripes" and, "The Life with Polka Dots, It Lives In Water."

Also framed are a few favorite photos of Avielle, with her brown curly hair and a spitfire spirit as big as her grin.

"She was very happy and wanted everyone else to be, too," Richman says.

Time is supposed to heal, but one year later, Richman says, they miss Avielle even more.

"At some point in every day, your breath catches in your throat," he says. "I cry every day. Jen does every day."

No one can bring Avielle back or lessen their grief. Their hope now, Richman and Hensel say, is just to spare another parent the same.