Accessibility links
Interview: Chad Jenkins, Brian Stann And Steve Eubanks Of 'All American' The players that year faced a sobering new reality: The nation was at war, and they'd soon leave the football field behind for the battlefield. In All American, author Steve Eubanks recalls that game through the eyes of two players — Army quarterback Chad Jenkins and Navy linebacker Brian Stann. 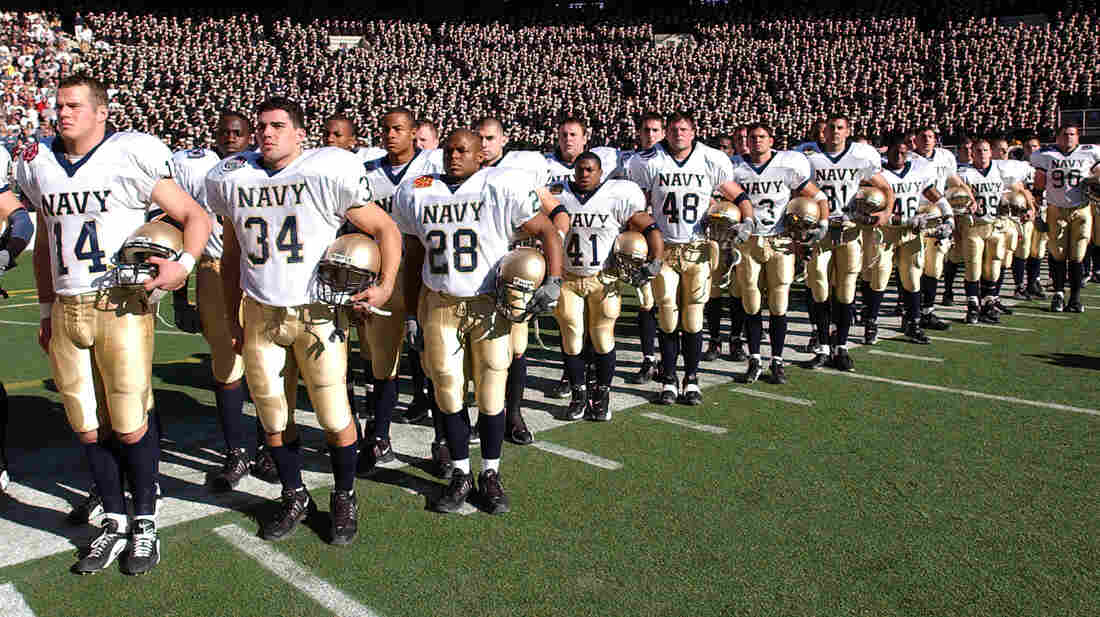 Navy players await the start of their annual game against Army, on Dec. 1, 2001. AP hide caption 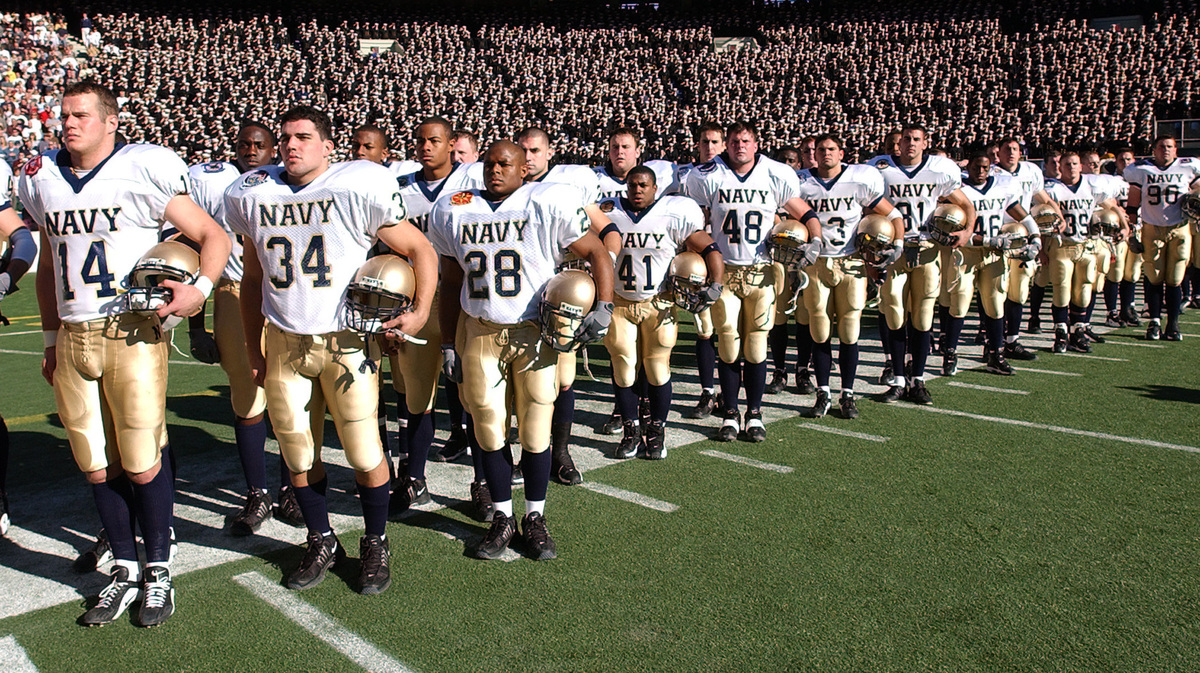 Navy players await the start of their annual game against Army, on Dec. 1, 2001.

On Saturday, Army and Navy will take the field to renew their legendary football rivalry for the 114th time. The teams are playing in Philadelphia, which is also where they faced off in 2001, just weeks after the Sept. 11 attacks. The players that year faced a sobering new reality: The nation was at war, and they'd soon leave the football field behind for the battlefield.

In All American, author Steve Eubanks recalls that game through the eyes of two players — Army quarterback Chad Jenkins and Navy linebacker Brian Stann. Jenkins and Stann didn't go to military academies purely to serve; these were places that offered a free, quality education and gave them the chance to do what they love — play football. 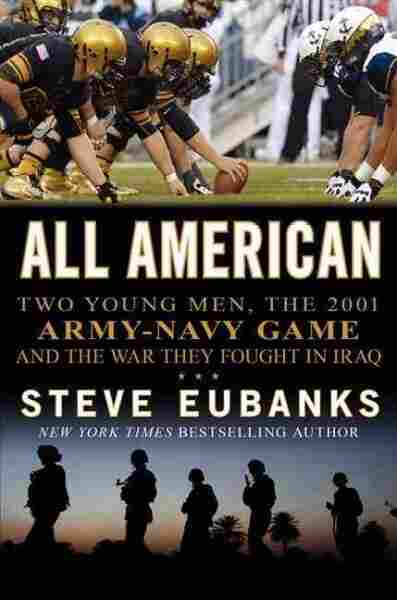 Two Young Men, the 2001 Army-Navy Game and the War They Fought in Iraq

Title
All American
Subtitle
Two Young Men, the 2001 Army-Navy Game and the War They Fought in Iraq
Author
Steve Eubanks

Jenkins, a stand-out high school quarterback from Ohio, tells NPR's David Greene how he told his parents about his decision to go to the U.S. Military Academy:

"I come home, I'm like, 'Mom, Dad, I've finally figured it out. I'm going to West Point.' And, you know, my mom was quickly breaking down into tears, like, 'What are you talking about? You're not going into the Army.' "

The game had more television viewers than any other college football game that decade, Eubanks says, but it wasn't because of the football.

He tells Greene, "The Navy wasn't very good, and the Army was having a losing season, so these were two losing football teams. But [the audience] wanted to see the men who were playing it, and that Army-Navy game more so than any other — because the people understood who they were watching, if they didn't understand what they were watching."

On their eagerness to join the war effort after Sept. 11

Jenkins: We were ready to go right then and there. I mean, it just lit a fire underneath you. It was such an anger of what had happened. So I think the realization and, you know, the mindset of what it was to ... be at West Point ... well, that's what it was for, you know. The culminating event is to go and ultimately defend our freedoms and defend our way of life, and that was becoming a real possibility by the minute.

Stann: This is going to sound a little odd, and I certainly don't mean to come off egotistical, but honestly, I was afraid it would end before I served. I did not want to be someone who went to the Naval Academy, there was a conflict and I wasn't involved in it because I graduated late. And that's a horrible thing to say, but it's kind of how you have to think if you're going to be a warrior.

Stann: That year we played at Notre Dame Stadium, which, you know, for anybody who's a football fan and plays, there's so much history there that it was a really cool experience for all of us. And for me, I kind of took it all in.

But when we came out onto the field, the entire stadium gave us a standing ovation. And it was incredible. I mean it was moving, I mean everything stopped. We kind of all started looking around; we didn't expect it. And we played really, really hard, and I think that they noticed that and obviously recognized the fact that most of the men they were watching play were going to go on to do something much larger than themselves, and certainly larger than a football game.

Jenkins: We were first visited by Gen. [Norman] Schwarzkopf. ... What a pivotal moment. I mean it's, you know, forever burned in my memory, just him walking through. And he said, "Gentlemen, today the Army's at war. You guys are at war with Navy. ... The Army does not lose wars."

Sen. [John] McCain came in. He's a fantastic human being; motivational speaker he is not.

And he gave that look to you like, You better not disappoint me, you better not let me down. And it was just so neat, because it was simple but it summed it up perfectly what our mission was, what we needed to do that day. And, you know, we were going to fight to the end to try to make it happen.

Stann: Let me address this real quick: I think this game should have an asterisk on the W for Army now, since they had the general come in and give them a motivational speech. I mean, you know, Sen. [John] McCain came in. He's a fantastic human being; motivational speaker he is not. ... George Bush comes in — the president, that's really cool. Like I said, no motivational speech, though. We didn't get the rev-up from a general. That's wrong.

Read an excerpt of All American