Accessibility links
Fresh Air Remembers Jazz Guitarist Jim Hall The guitarist, composer and arranger died in his sleep Tuesday at 83. Hall was known for a subtle, lyrical playing style, a gift for innovation and collaborations with a host of talented musicians in a career that stretched more than seven decades. Hear an interview from 1989. 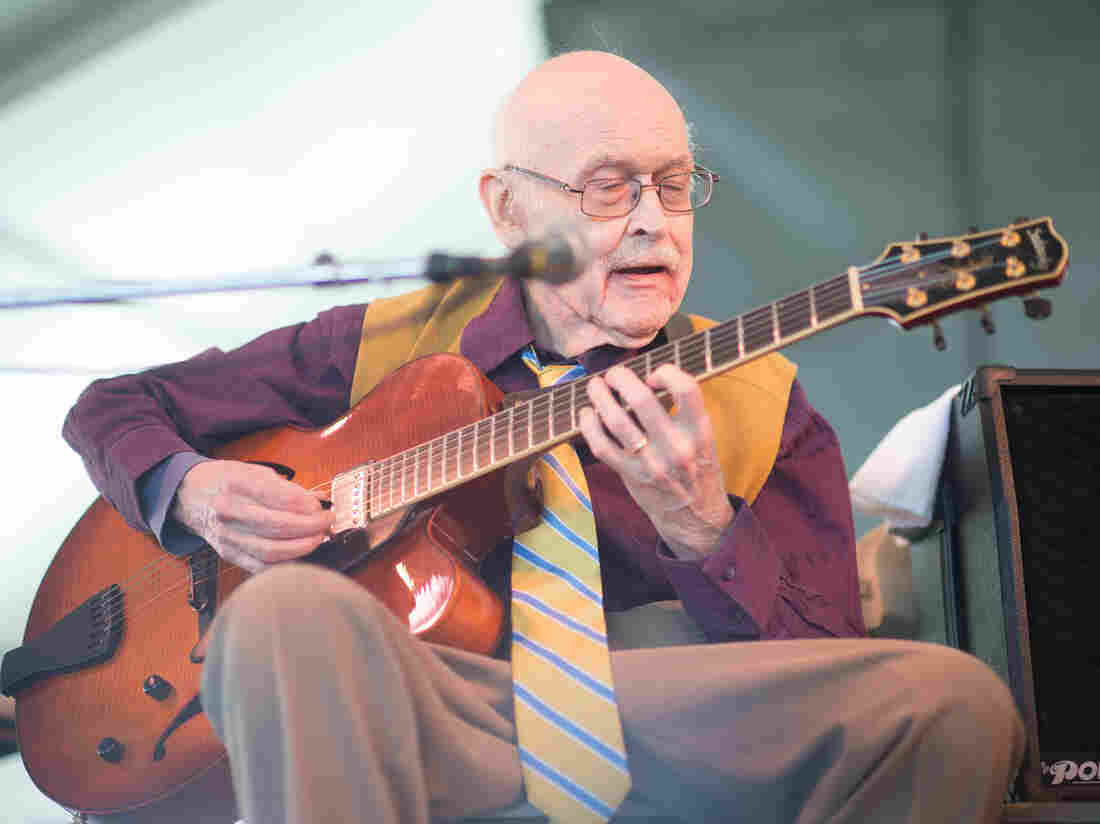 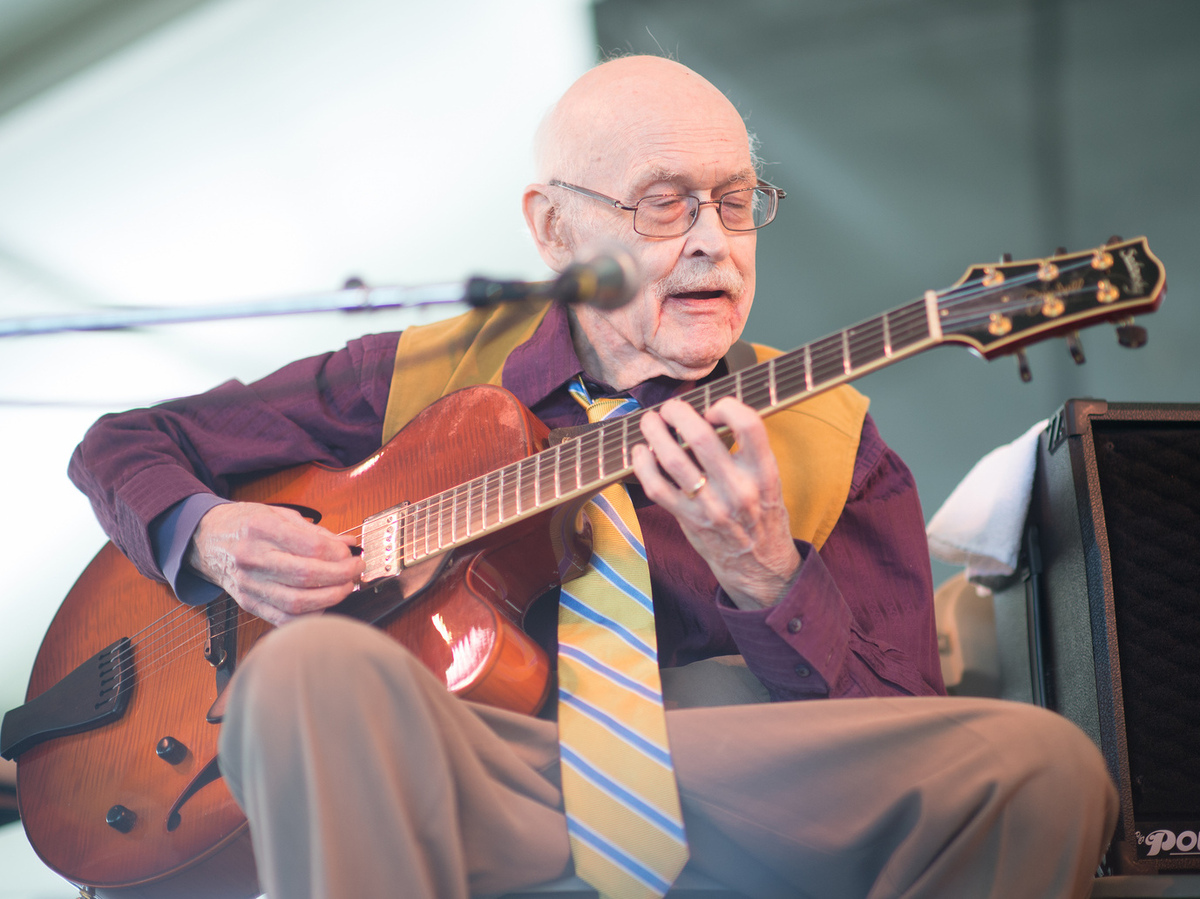 Jazz guitarist, composer and arranger Jim Hall died in his sleep Tuesday; he was 83. Hall was known for a subtle, lyrical playing style, a gift for innovation and collaborations with a host of talented musicians in a career that stretched more than seven decades. Critic Andrew Gilbert called Hall "one of jazz's most respected improvisers, an artist who wields his guitar like a paintbrush, shaping and shading each note to achieve just the right hue and texture."

Hall played guitar as a teenager and received a degree in music theory in 1955. He was an original member of the Chico Hamilton Quintet, and his 1962 album with saxophonist Sonny Rollins, The Bridge, created a stir in the jazz world. Hall went on to play with many other artists, including Bill Evans, Paul Desmond and Ella Fitzgerald, and influenced a generation of jazz guitarists. In 2004, he earned a Jazz Masters Award from the National Endowment for the Arts. He was still performing as recently as this summer. Here, we'll listen to a conversation Hall had with Fresh Air's Terry Gross near Christmastime in 1989.

This is FRESH AIR. I'm Dave Davies, in for Terry Gross. Jazz guitarist, composer and arranger Jim Hall died in his sleep earlier this week. He was 83. Hall was known for a subtle, lyrical playing style; a gift for innovation; and collaborations with a host of talented musicians; in a career that stretched over seven decades. Critic Andrew Gilbert called Hall one of jazz's most respected improvisors; an artist who wields his guitar like a paintbrush, shaping and shading each note to achieve just the right hue and texture.

Hall played guitar as a teenager, and got a degree in music theory in 1955. He was an original member of the Chico Hamilton Quintet, and his 1962 album with saxophonoist Sonny Rollins, "The Bridge," created a stir in the jazz world. Hall went on to play with many other artists including Bill Evans, Paul Desmond and Ella Fitzgerald, and influenced a generation of jazz guitarists. In 2004, he earned a Jazz Master's Award from the National Endowment for the Arts.

He was still performing as recently as this summer. Terry spoke to Jim Hall near Christmastime in 1989. They began by listening to Hall's duet with bassist Ron Carter, "Alone Together," from their CD, "Telephone."

(SOUNDBITE OF SONG, "ALONE TOGETHER")

Guitarist Jim Hall from his first album called "Jazz Guitar." How old were you when you made that record?

GROSS: What were you working on, on your playing at that time?

GROSS: No, you're playing, you know, what were you really concerned with at that time?

HALL: I was just thinking about that as the record was playing. I think I probably loved Zoot Sims and Lester Young about then. And I can kind of hear that in my playing. I sounded like, I was around Zoot Sims a lot for a period of years and I loved his rhythmic sense, his sense of time. And I loved Lester's melodic sense. So it sounds like kind of a combination of the two of them and a little bit of Charlie Christian. And those were a little shorter than the way I play now. Sounded pretty good, actually. I enjoyed hearing that.

GROSS: This is FRESH AIR. And we're listening to Terry's interview with jazz guitarist, composer and arranger, Jim Hall, who died Tuesday at the age of 83. They spoke in 1989.

Over the years, you've played with many different musicians, including Jimmy Giuffre - who you mentioned.

GROSS: Ben Webster, Sonny Rollins, Lee Konitz, Bill Evans. Some of the musicians you've played with have been black, some of them have been white. You've played in groups of I think all different racial configurations.

GROSS: What are some of the absurdities you've run into in various configurations with how, like the black player or the white player was treated?

HALL: Well, often, when I was working with Sonny Rollins, I was - I hate to even get into racial things. But, nevertheless, it's a fact that I was the white guy in the group and often we'd be checking into a hotel and the people at the hotel would assume I was the manager, whereas, in reality, I was the most unmanageable one in the group.

HALL: And then I remember driving cross-country with Chico Hamilton - and this was in the '50s - and Chico wouldn't even get out the car going through the South and the West, and I'd have to go in for, you know, for food and bring it out to him and he was the leader of the group. That was I would say absurd in every sense of the word. Mostly the experiences were terrific. I wouldn't trade any of that. Just, you know, the peripheral business was reflected the what was happening in the country and still is, I think.

GROSS: After playing for years and, you know, after being on the road for years, in the mid-1960s, you decided to come off the road for a while and you got a job in New York working in the band of "The Merv Griffin Show."

GROSS: Why did you want to go off the road?

HALL: I felt I'd enough of it for a while. I was interested in getting married. And I'm not quite sure. I think I was tired. I had been on the road almost constantly for about 10 years and the Griffin show job was available so I took it.

GROSS: What kinds of music recalled on to play?

HALL: The same people. I felt like I was - what did Yogi Berra say? Deja vu all over again. I had played with these nuts when I was a kid. You know, you'd play a wedding and some, and the bride would have a cousin or something, and you'd come up and sing and it was always bad and they'd get lost. So now these guys are stars and you're, I'd say I did this when I was 14. That's the way it felt to me. And then occasion - well, on the other hand, I got to play with Count Basie on that show. We had a big band for a while when we went to CBS and I had never played with Basie. And I also got to play with Duke Ellington, you know, by default. We were there. We were the band. But generally we just, we would play "While the World Was Watching." TV commercial we'd be playing some of our staff. And it was a good band. Musically, it was terrific. Bob Brookmeyer was in the band, Richie Kamuka, marvelous tenor player. Jake Hanna was the drummer, for a while we had Kai Winding, Benny Powell, was another trombone player. Great musicians. But I don't even particularly want to dwell on it. It was just a bad, not something that I would - that's not what I started out to do and I managed to get out of it.

GROSS: Hmm. Well, I want to play something that you recorded in the mid-1970s. This is from an album called "Concerto." And I want to play the alternate take of your recording of "The Answer Is Yes," which is a song that was written by your wife, Jane Hall.

GROSS: And I'm playing the alternate take here because it features a lot more of you.

GROSS: And it's issued on the CD version of the album. You want to say anything about this before we hear?

HALL: It's a tough tune. My wife did write it and I say that because it has a - the bridge on it is difficult. And I remember that Chet Baker had a tough time getting through the bridge because he didn't, he didn't read chord changes. He played entirely by ear, he's a marvelous player. I'm curious to hear it.

GROSS: Well, let's give it a listen.

(SOUNDBITE OF SONG, "THE ANSWER IS YES")

GROSS: An excerpt of "The Answer Is Yes," featuring my guest guitarist, Jim Hall, from his reissued album "Concerto." Well, I liked it. What did you think?

HALL: It was kind of interesting. Roland Hanna wasn't even on that take, it sounds like, and neither was Chet. So maybe that's why we did another one. I guess that was just a trio version. I'll have to, I think I have a CD of that, but I haven't heard it yet. I sort of like the way I was thrashing through the chord changes there. Worked out all right.

GROSS: You've never been one of these like flashy speed guitarist.

HALL: No. I never could. Actually, I wish, often wish that I could do that and just not because I chose not to. But the guitar has been difficult for me to play physically. It gets better occasionally. For instance, I had to play solos in Brazil a couple of years ago and that really frightened me. So I'd practiced, every morning I'd wake up in a sweat about six o'clock in the morning, and I practice until about nine, then go back to sleep. And I actually did get better. My technique got better. I got faster. I also got through the solo concerts. But I've never really had the, that particular kind of speed facility. I think I have other kinds of techniques that I use on the guitar but speed has never been one of them. So that's why I play slower tempos and ballads.

GROSS: Certain people have this almost stereotyped view of the jazz musician as hipster.

GROSS: You know, and it's an image that physically you don't fit into. Do you know what I mean?

GROSS: The hipster image. Did people ever say to you, you don't look like a jazz musician?

HALL: Mm-hmm. Yes. Or a number of other things too. Yeah.

HALL: Sure. That's why I said people thought I was a band manager on the road.

GROSS: Right. Right. So how do you react to that?

HALL: I enjoy that. I get a kick out of it. If you can play then it makes it even more fun. You don't look like an athlete, but actually you're Babe Ruth or something. That's pretty good.

DAVIES: Jim Hall, speaking with Terry Gross, recorded in 1989. Hall died Tuesday at his home in Greenwich Village. He was 83.

I'm Dave Davies and this is FRESH AIR.

DAVIES: Coming up, we had a late lyricists Sammy Cahn's definition of chutzpah, singing "Be My Love" in front of one of the great singers of the day, Mario Lanza. It was just one of many of the songs he would demonstrate for singers like Lanza and Frank Sinatra. This is the year of the centenary of Sammy Cahn's birth. We'll listen to a 1985 interview with him. And David Edelstein will review the new film "American Hustle."