Accessibility links
A Grieving Newtown Mother's Motto: 'Love Wins' As a therapist, Nelba Márquez-Greene has spent a career counseling mentally ill and troubled young people. But she'll never understand what drove a young man to take the life of her 6-year-old daughter and 25 others. A year later, she is trying to prevent violence and promote healing. 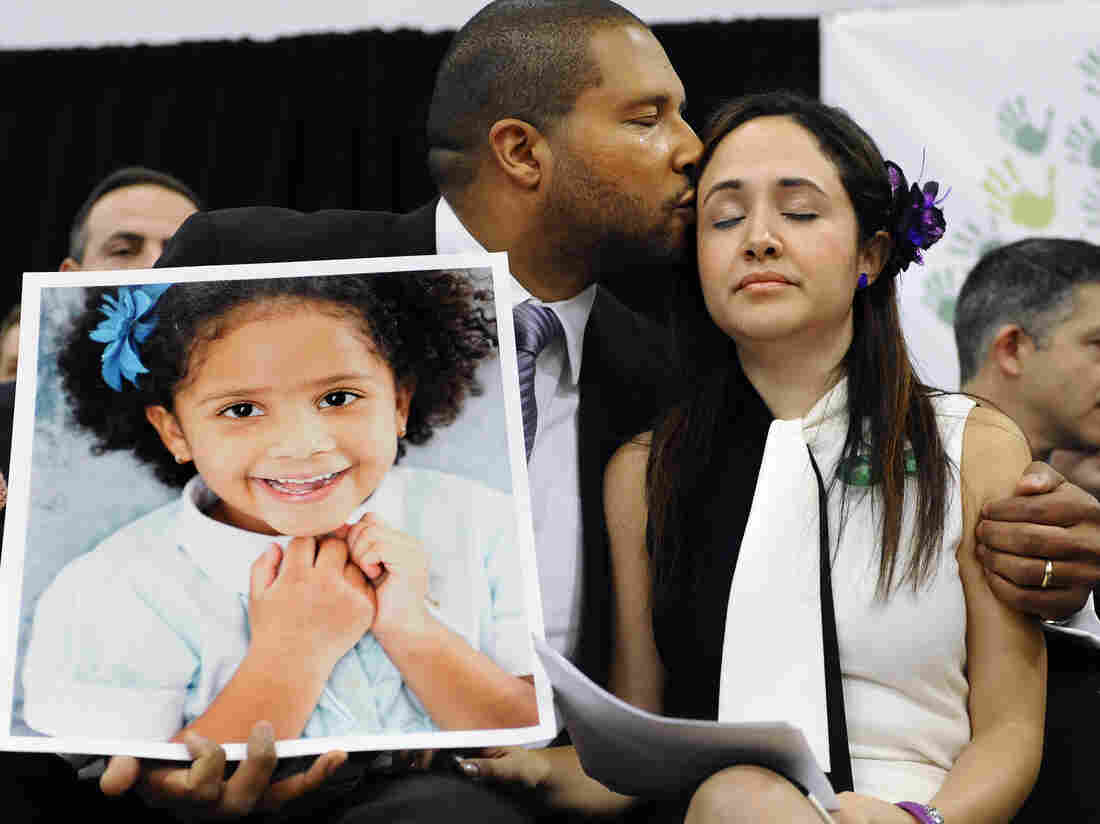 Jimmy Greene holds a picture of his daughter, Ana, as he kisses his wife Nelba Márquez-Greene, at a January news conference in Newtown, Conn. They try to remember the good days with their daughter. "It is what brings me great comfort and great joy," Márquez-Greene says. Jessica Hill/AP hide caption 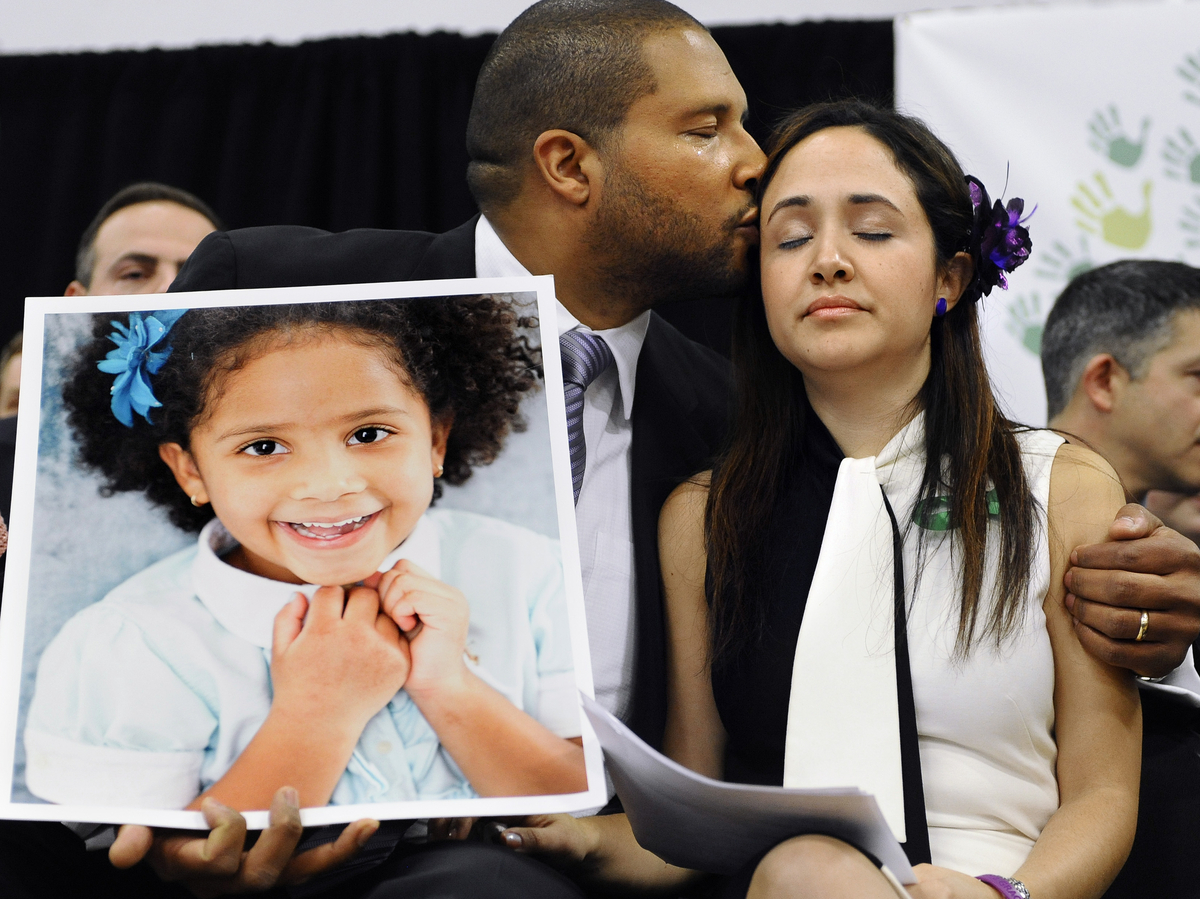 Jimmy Greene holds a picture of his daughter, Ana, as he kisses his wife Nelba Márquez-Greene, at a January news conference in Newtown, Conn. They try to remember the good days with their daughter. "It is what brings me great comfort and great joy," Márquez-Greene says.

As much as Dec. 14 will forever be a day of unfathomable grief for Nelba Márquez-Greene, Dec. 13 will be one of unending gratitude.

"I will never forget that day," she says.

On that day, Márquez-Greene stopped the usual frantic drill: rushing to activities and errands, worrying about the dishes and laundry, even cleaning up the mess on the floor.

That morning, her 6-year-old daughter, Ana Grace, had knocked down the entire nativity set off the piano. Baby Jesus was still in little pieces on the floor when she came home from Sandy Hook Elementary School in Newtown, Conn.

Márquez-Greene can't explain it, but something compelled her that evening to just ignore it all and instead corral Ana, her son Isaiah and her husband Jimmy into the car.

"And off we went to the Cheesecake Factory," she says, "where we had our final time as a family of four."

It was, she says, the greatest gift.

"We were sitting there taking goofy pictures, Ana was making faces," she says. "We had second dessert. We had, like, three pasta dishes. I'm so grateful we had that."

After the shooting the next morning, where Ana and 25 others were killed, her parents wondered how they'd ever feel whole again.

Most days still bring unbearable pain. But as Márquez-Greene puts it, she's "made it her business" to stay focused on the good days with Ana.

"It is what brings me great comfort and great joy," she says. "And that is what gives us strength."

Márquez-Greene is a therapist who's spent a career counseling mentally ill and troubled young people. But she says she'll never understand what drove a young man to take the life of her little girl and 25 others.

After the shooting, Márquez-Greene put her therapy practice on hold to work instead on a more macro scale — to prevent violence and promote healing.

On Dec. 2, 500 people packed a conference for the Ana Grace Project, aimed at building community, connections and compassion. As Márquez-Greene sees it, these qualities are the antidote is to the kind of isolation that always seems to be the story of deranged mass shooters.

"People say to me, 'I can't believe what that monster did to your baby!' Well, you know, it's true something terrible happened to Ana, and that was a terrible day," Márquez-Greene says. "But if we even use that language, 'monster,' if we talk like that, we already make a separation between us and them. And it doesn't work that way."

Márquez-Greene says her own compassion continues to be tested — like at her conference, when she was setting up a candle for each of the lives lost on Dec. 14. She thought of the shooter, who killed himself, and his mother, who he also killed.

Ana's brother Isaiah opened the conference with a solo performance.

After the trauma of Dec. 14, Márquez-Greene knows all too well that her son now counts among those at-risk youth in need of the stronger connections she's trying to build.

"That is my job on the planet. If I do nothing else but raise a son who is able to survive this tragedy and still come out able to love and receive love from others, that will be our greatest victory," she says.

But it's hard. Most days, she says, she feels like she's hanging off the edge of a cliff.

Her husband Jimmy, a jazz musician, just recently managed to get back on stage again. He's written a song for Ana named "Last Summer."

Music, Márquez-Greene says, brings back the highs and buoys them through the lows — like that awful day they laid their daughter to rest.

"That day was — I still have hard time talking about," she says. "But when they were lowering her casket into ground, and the weeping was just so loud, my husband began to sing.

Last summer, Jimmy Greene and his old friend, Harry Connick Jr., recorded a song for Ana, based on what became the family's motto after the shooting: Love wins.

"I don't even remember how it all got started; I just remember it just became a chant in our house shortly after the shooting. We just needed to keep Ana alive. We needed to keep her spirit with us," Márquez-Greene says. "Love wins. This is what we taught her: to honor, to praise, to be loving. And I am raising two loving, connected, compassionate children.

"And I just realized I just said, 'I am raising.' It's hard, I still vacillate between present and past tense."

Perhaps, she says, because it's only been a year. But it must also be because of the way she keeps the good memories of those days like Dec. 13.

As she likes to say, they want to remember Ana's life twice as loudly as her death.