Accessibility links
Not My Job: Actor Oscar Isaac On Folk Music Vs. Filk Music Isaac plays a folk singer in the new film Inside Llewyn Davis, so we're going to ask him three questions about filk music — a sub-genre written by and for science fiction fans, sometimes in homage to their favorite characters and stories. 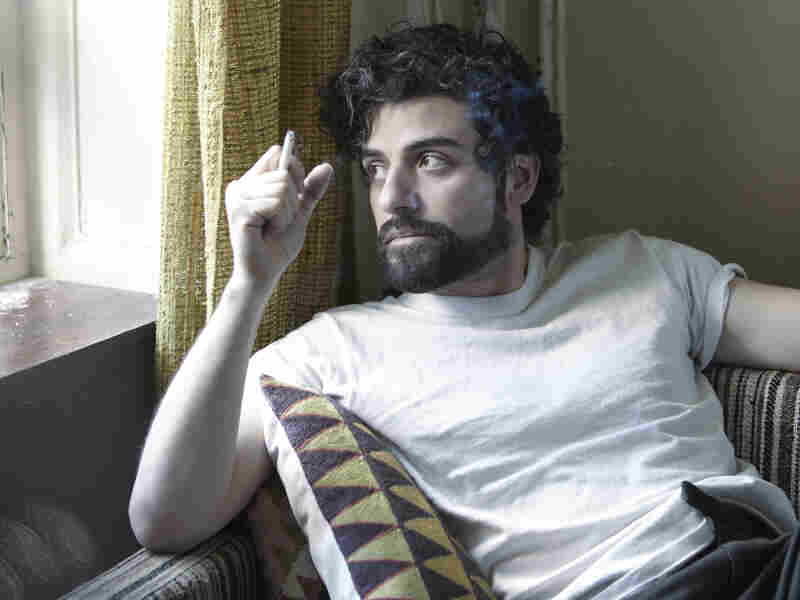 Oscar Isaac as the titular character in Joel and Ethan Coen's Inside Llewyn Davis. Alison Rosa/Courtesy of the artist hide caption 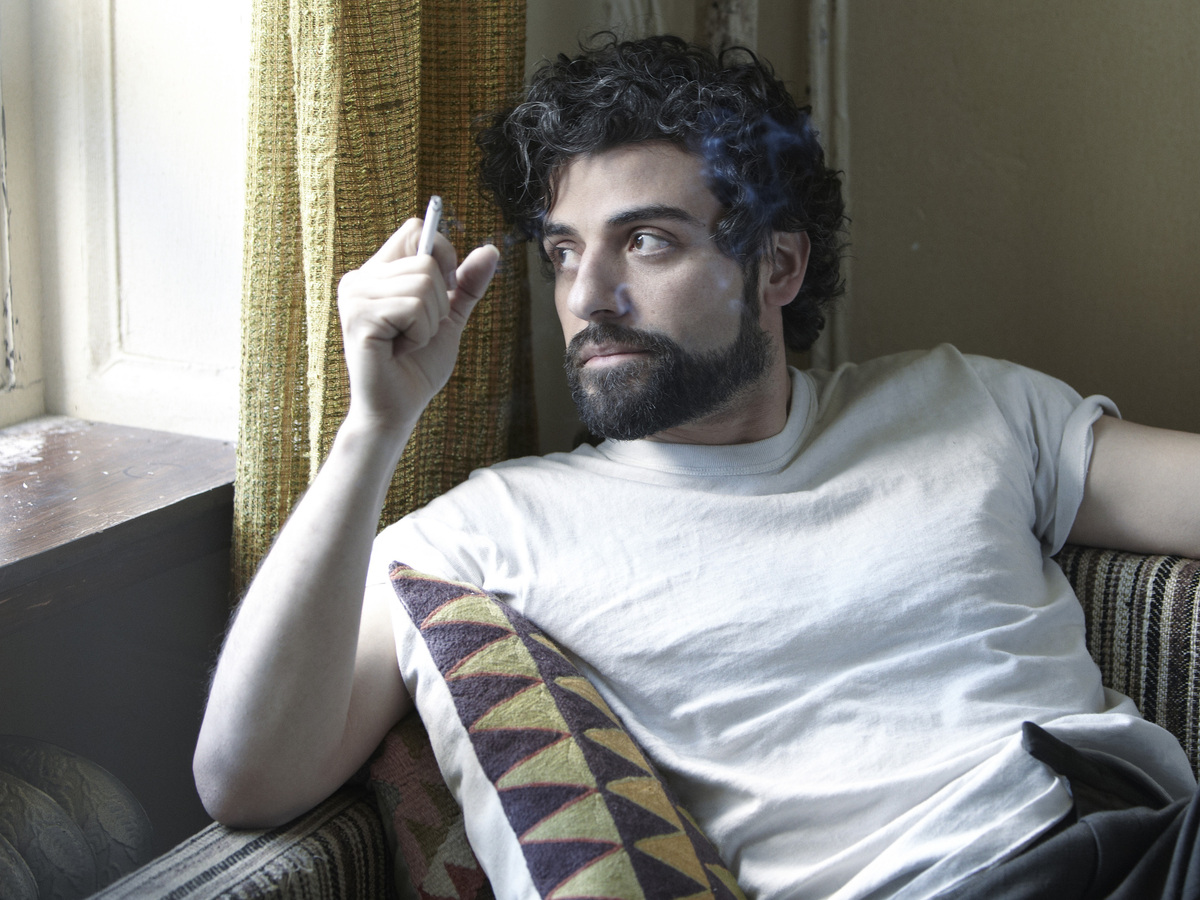 Oscar Isaac as the titular character in Joel and Ethan Coen's Inside Llewyn Davis.

Alison Rosa/Courtesy of the artist

The latest movie by Joel and Ethan Coen, Inside Llewyn Davis, is a lot like their other movies in which a guy endures a lot of terrible things happening to him. This one's different though, in that this time, the guy seems to deserve it. Oscar Isaac plays — and sings — the role of Llewyn Davis, a homeless, former merchant marine trying to make it in the 1960s Greenwich Village music scene.

Since Isaac plays a folk singer in the new movie, we've invited him to answer three questions about filk music. That's the sub-genre of music written by and for science fiction fans, sometimes in homage to their favorite characters and stories.

And now the game where people on the way up are reminded what it's like down at the bottom, in a game called Not My Job. The latest movie by Joel and Ethan Coen, "Inside Llewyn Davis," is a lot like their other movies in that a guy endures a lot of terrible things that happen to him.

This one's different, though, in that this time the guy seems to deserve it. Oscar Isaac plays and sings the role of Llewyn Davis, and he joins us now. Oscar Isaac, welcome to WAIT WAIT...DON'T TELL ME!

OSCAR ISAAC: Thanks, Pete, happy to be on.

SAGAL: Oh happy to have you. We got to see the movie in a screening. It's terrific, as everybody will soon find out. You are terrific in it. I'm very interested in knowing what the role was described as, you know, because when these things go out, they say we're looking for somebody who's this. But what do they describe the role as?

ISAAC: Not Dylan was what it said at the bottom of the page.

ISAAC: This guy is not Dylan. He's not the genius poet. This is the blue-collar workman.

SAGAL: Right, and part of his character, I don't think I'm giving anything away here, he's - at least he's not very well liked by the people around him.

SAGAL: Yes. And is that something that they asked you to show right off? Can you be a bit of a jerk?

ISAAC: Well no, no, I mean, no. I think this is a guy who's pretty disconnected, and, you know, he's - life is squeezing him, and these are the noises that he's making.

ISAAC: He's too busy surviving to worry about things like empathy.

SAGAL: Right, kindness. Your co-star in this movie in an orange cat that you carry around a lot.

FAITH SALIE: Did you have any challenging moments with that cat, Oscar?

ISAAC: Every moment was a challenging moment.

ISAAC: Yeah because there were like four or five of them because you can't train a cat.

SAGAL: Wait a minute, you can't?

ISAAC: Well, we couldn't train ours. So we just got like four or five different cats that did one thing. You know, like if we needed the one cat that can walk...

ISAAC: From Point A to Point B, we had that cat. If we needed a cat that would just kind of be numb and semi-sedated, comatose, that's the one that I would carry around. And so - and then you had the really squirrely one that you needed to jump around, when you needed, you know, an action cat scene.

ISAAC: And that would be the one they would tie to me by a wire.

SALIE: What was your favorite...?

SAGAL: Wait a minute, I'm sorry, hold on. They tied the cat to you with a wire?

SAGAL: So you're on - so they say we're about to do the scene, and we need the cat to jump around. Why did they tie it to you?

ISAAC: Because they don't want it to go run off into the subway and get run over, you know, or yeah, whatever. And so what do you think a cat does when it doesn't want to be tied to you?

SAGAL: What does it do, Oscar?

ISAAC: It scratches your face, your neck...

ISAAC: And then you know what happens? It gets away from the wire anyway, it breaks the wire.

SAGAL: So there you are on the set of the Coen Brothers' film, chained to an orange cat that hates you. This is like...

ISAAC: And really just hates the movie business in general.

SAGAL: This is like a sick remake of "The Defiant Ones." This is awesome. Did you have a favorite of the multi-cats that you used to play this cat?

ISAAC: The comatose one.

SAGAL: I was amazed watching the movie, again, by how mean just about everybody in the movie is to you.

SAGAL: Did you ever go to the directors and say guys, can I help a child across the street, just do something to show that I'm a human being?

ISAAC: No, no, not really because, you know, when he shows that he's a human being, that's what the music's there for.

ISAAC: Actually he has so much to say, but he just, he can only say it when he has a guitar in his hands.

SAGAL: Right. Did you, like, go to a Starbucks just so somebody would be nice to you, even if you were paying them?

ISAAC: I would do the opposite, actually. Before I started shooting, I would go to parties and try to interact the way Llewyn does. And one of two things would happen. Either they would think you were a jerk and just walk the other way, or it would get really intimate really quick.

MAZ JOBRANI: And at what point do you reveal to them that you're doing, like - you know, you end up sleeping with somebody, and then the next day saying oh, it's just an act.

JOBRANI: I'm doing research. I'm really not into you.

ISAAC: That is almost exactly what happened.

SAGAL: Now if you're serious, I want to hear the story.

ISAAC: I am serious.

ISAAC: I went to a party, and I was forced to be at this party, and I went dressed as Llewyn. It was a month before shooting. And then I was sitting in the corner just eating. I was the only person eating at the party. And this girl who ended up, she's a documentary filmmaker, so obviously she spotted the weirdo and went directly to that one.

ISAAC: And sat with me and talked to me for a long time. And I guess she liked the whole thing.

SAGAL: Well, when she found out that you were an actor and that you were in character preparing for this big role, and that - and here I presume a bit - that you're actually a very nice, open, giving, empathetic person...

SAGAL: Was she disappointed?

ISAAC: You know, kind of.

SAGAL: Well Oscar, we're delighted to have you with us, and we've asked you here to play a game we're calling....

SAGAL: So you play a folk singer in the new movie, but what do you know about filk music, f-i-l-k? That is the odd sub genre of music written by and for science fiction and fantasy fans, sometimes in homage to their favorite characters and stories.

So we're going to ask you three questions about the world of filk music, get two right, you'll win our prize for one of our listeners, Carl's voice on their home answering machine, singing his love song to Dr. Who.

SAGAL: Carl, who is Oscar Isaac playing for?

SAGAL: Are you ready to play, Oscar?

SAGAL: All right. First question: much like the folk scene, the filk scene has its own customs and language. Which of these is a real term from the filk scene: A, a whiny cyber-songwriter; B, Princess Ukeleia; or C, a token Bardic circle.

ISAAC: I have to go with that.

SAGAL: Princess Ukeleia. I like it, too, but it is in fact a token Bardic circle. It is - it's a way of organizing a group of filk singers in a room.

SAGAL: All right, but you still have two more chances here. Filk songs are often bawdy. Which of these is a real R-rated filk song? A, "A Reconsideration of Anatomical Docking Manuevers in Zero Gravity"; B, "I Will Kiss You On the Mouth As Soon As I Figure Out which Hole That Is"; or C, "My Son Looks Suspiciously Like Captain Kirk"?

ISAAC: I'm going to go with A on that one.

SAGAL: And you are correct.

PAULA POUNDSTONE: I think we've all felt that.

ISAAC: You're right, you're right. They wouldn't do that.

SAGAL: They wouldn't, probably not.

SAGAL: It is in fact lime Jell-O.

SAGAL: It's an inside joke, apparently. According to a list of inside jokes among filkers we found, it refers to something that happened with lime Jell-O in a bathtub many years ago at a filk gathering.

SAGAL: Of course it does. Carl, how did Oscar Isaac do on our quiz?

KASELL: Oscar had two correct answers, so he wins for David Loce.

SAGAL: Oscar Isaac stars as Llewyn Davis in the new movie "Inside Llewyn Davis" from the Coen Brothers. It's in theaters now. Go see it. He is terrific, as is the movie. Oscar Isaac, thank you so much for being with us.

ISAAC: Thanks (unintelligible). Thanks, guys.

SAGAL: In just a minute, boxers or briefs? It's our listener limerick challenge. Call 1-888-WAIT-WAIT, to join us on air.

Support for NPR comes from NPR stations, and: Lumber Liquidators, offering a variety of sustainably harvested flooring, including pre-finished and stained at 1-800-HARDWOOD; Progressive Insurance, helping people shop for car insurance at 1-800-PROGRESSIVE and Progressive.com; and the International Rescue Committee at work in the Philippines and worldwide to help those uprooted by war and disaster, it's not charity, it's humanity at Rescue.org.