Accessibility links
A Common Story: Bullet's Trajectory Interrupts Child's Path Ka'nard Allen, 11, has been caught in New Orleans crossfire — twice. He survived, but his extraordinary story made him a symbol of the toll violence takes on children in American cities. What happens after the bullets stop flying? How does a child get up after being gunned down? 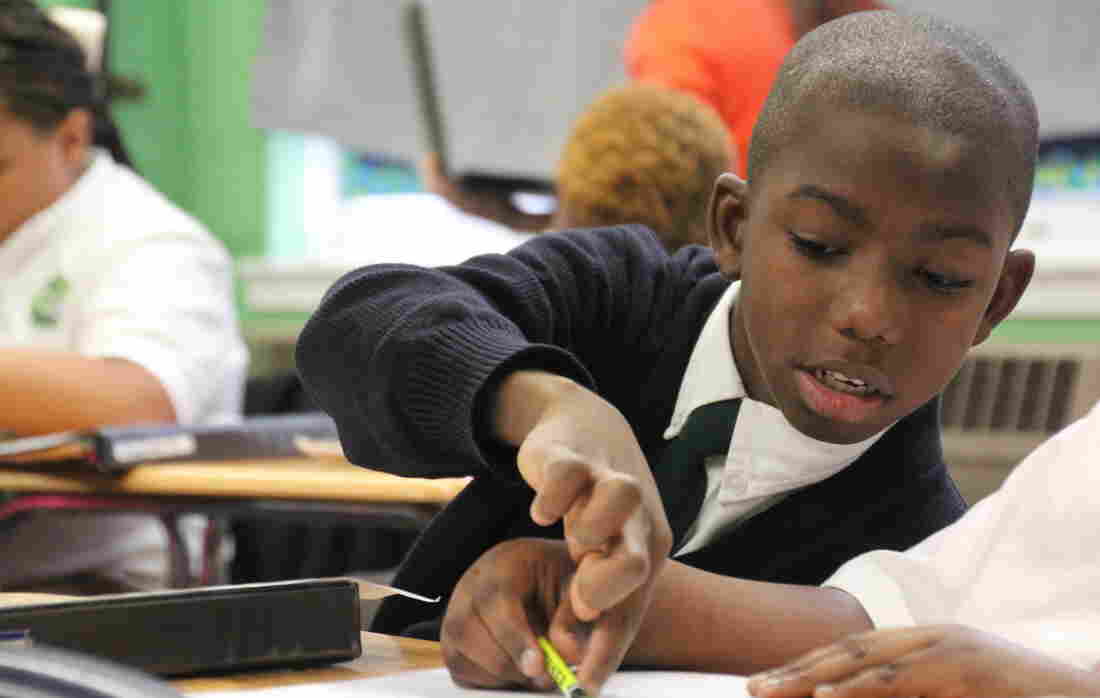 Ka'nard Allen, twice a victim of gun violence, started at a new this fall in New Orleans. Administrators say he's just like any other fifth-grader, despite all the adversity he's faced in his life. Keith O'Brien for NPR hide caption

Murders are down in New Orleans this year, bucking a national trend. Still, gun violence remains a problem — and children can't escape it. They're left with scars both physical and emotional.

What happens after the bullets stop flying? How does a child get up after being gunned down?

One boy's story shows the tragedy of gun violence and a community's efforts to heal its victims.

Caught In The Crossfire

Ka'nard Allen begins his days like most 11-year-old boys, with a mad scramble for the school bus. Today's problem: missing drumsticks for band practice.

It's a scene that plays out in homes with children everywhere. The bus is coming. The homework is missing. The library books are due. And though he'd like to find those drumsticks, Ka'nard's just happy to be part of something normal. The last 19 months have been anything but.

Ka'nard was shot — the first time — in May 2012, on his 10th birthday, at his grandmother's house. There were balloons, presents — and then gunfire, from an alleged gang member targeting someone else at the party. Ka'nard knew right away what was happening.

It was like a pop. And then you heard another — pop, pop, pop. Everybody started running. I'm like, 'Ka'nard, just run. Run, Ka'nard. Just run.'

"Cause that's all you heard was shooting," he says.

One bullet sliced through his calf. The other grazed his neck, barely missing his skull. To get help, Ka'nard's mother, Tynia Allen, had to step over his dying 5-year-old cousin, Briana.

"When I did get to the hospital, the only thing I remember ... they asked me, what was his name, when his birthday was," Allen says. "Only thing I was able to respond was: 'Today. Today.' That's all. 'Today.' "

Ka'nard recovered. But a few months later, his father was killed — stabbed. Then, last May at a popular Mother's Day parade, Ka'nard and his mom heard that sound — again.

Once more, he'd be shot, grazed across the cheek. Another close call. Nineteen people were wounded. Ka'nard was no longer just a victim; he was now a symbol of the toll violence takes on children in American cities.

"I wonder what must go through that young boy's mind. He must really be questioning what kind of existence this is for him," says Ronal Serpas, superintendent of the New Orleans Police Department.

Serpas says he's pleased with the progress his detectives have made this year, busting up street gangs with sweeping indictments.

"It is making a difference. It's way too early to claim victory ... But these young men are watching this. There's no question in my mind about it," he says. "And I think that's partially responsible for why we're seeing a reduction in murder this year — greater than we've seen in a very long time. And we're already into December now. And murders are down just under 20 percent."

Still, violence remains prevalent in New Orleans' poorest neighborhoods, and it's not just here. According to the most recent FBI statistics, homicides were up nearly 10 percent last year in American cities with populations between a half-million and a million people.

The bullets, inevitably, seem to find a child. And lately in New Orleans, there's been a spate of tragedies: an 11-year-old girl killed by stray bullets in her home; a 1-year-old girl shot to death in her nanny's arms; and a 7-month-old boy shot in the head while riding in a car with the intended target, his father.

For Many Urban Schools, Gun Violence Remains A Daily Reality

"It's heart-wrenching. It's a tear-jerker, and it happens every day," says Wanda Ballier, supervisor of Louisiana's multi-systemic-therapy program in New Orleans.

Ballier and her therapists help all sorts of kids, but their clients often have one thing in common: violence in or near the home.

Children living in violent neighborhoods are prone to both depression and aggression. And they often struggle in school. But then, what child in these circumstances wouldn't be distracted? In recent months, Ballier has worked with a 16-year-old boy who's been shot multiple times.

"He's healing. And we're supporting him and his family, and he is motivated to go back to school. He's motivated to beat the system, to be a success," she says. "To me, he said, 'Ms. Ballier, I'm gonna make my mom proud' ... And I say, 'You've already made her proud.' "

As much as Ka'nard wants to be just a boy, just a fifth-grader playing ball with his friends, he has had his problems, too.

He struggled in school last year. He misses his father. And then there were the fears, all too real, that someone was trying to kill him — and might come finish the job.

"I was scared that people were going to try to come get me or something," Ka'nard says. "I thought people was coming to my house and trying to come get me, because they watched it and seen [my] address on the news." 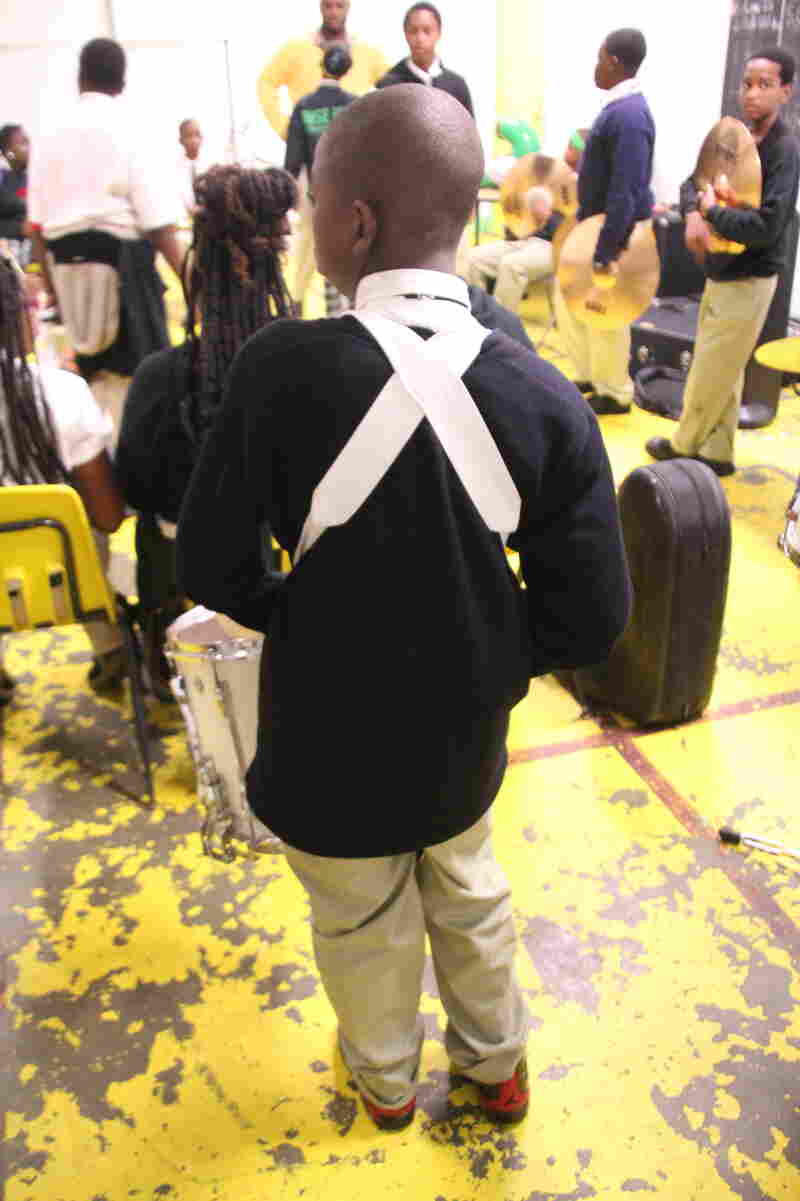 Ka'nard plays snare drum in his school marching band, and band director Joshua Webster says Ka'nard is eager to learn the music: "He comes to practice every day after school — every day." Keith O'Brien for NPR hide caption

Therapy has helped Ka'nard. And a new school, this fall, has helped, too. Administrators at Samuel J. Green Charter School say Ka'nard's thriving.

But he's also been luckier than most kids scarred by violence, thanks to the high-profile nature of the shootings that injured him. Son of a Saint, a New Orleans nonprofit that mentors boys with no fathers, reached out to Ka'nard with the encouragement of two state representatives.

It took Ka'nard in last spring, giving him positive male role models, structure in the form of weekly French lessons, and other activities.

On a recent Saturday, Ka'nard and a few other boys gathered at Cascade Stables in New Orleans for an afternoon of horseback riding. Barbe Smith is the owner of the stables and has watched Ka'nard for months.

"He's so much happier now," she says. "When he first came out here, he wouldn't talk to anybody and he was real quiet. Now he's just a regular kid, which is really cool to see for us."

Today, Smith decides, it's time for something new: learning to canter. An instructor pulls Ka'nard and his horse, Clipper, aside. But the boy isn't so sure about cantering, a speed between a trot and a gallop.

Ka'nard hesitates at first in the saddle. Twice, he almost has Clipper going, but he pulls back on the reins. Then, on the third try, he gets it.

For the rest of the afternoon, Ka'nard can't stop smiling. And there are other reasons to be happy. After the new year, Son of a Saint is flying him and seven other boys to Montreal so they can practice the French they've been learning.

Ka'nard is scared about his first airplane trip, but also excited to leave New Orleans, to see a new place, see the world from above. He wonders what it will feel like to fly.