Accessibility links
The Case For — And Against — Loving 'Love Actually' These past few weeks, a battle over why you should love or hate the film has bubbled up on the Internet. We wade in.

The Case For — And Against — Loving 'Love Actually'

The Case For — And Against — Loving 'Love Actually'

The 10-year anniversary of the movie Love Actually seems to have pulled back a scab for some folks. These past few weeks, a battle over why you should love or hate the film has bubbled up on the Internet, starting with The Atlantic's Chris Orr, in which he declared it the least romantic movie ever.

When we saw all the folks drawing their hard lines in the sand about Love Actually -- it's not good, it's not bad, does it even matter, it is not a Christmas movie!!! — pop culture writer Jen Chaney and I started feeling it in our fingers and feeling it in our toes, and knew we had to throw some words at this, too. So, here goes.

Jen: There's no such thing, really, as a burden of proof in a conversation about the quality of a film, especially a "film" such as Love Actually. But let's just pretend that there is such a thing, and let's further pretend that you, Tanya Ballard Brown, must bear that burden and convince me that this movie is not just two-plus hours of soggy, ridiculous, British-accented claptrap. Tell me I'm wrong. And then tell me how Hugh Grant can possibly be the prime minister of England, because: WHAT?

(Notice I'm ignoring Hugh Grant as the prime minister, 'cause I got nothing for that other than he can shake his bootie.) 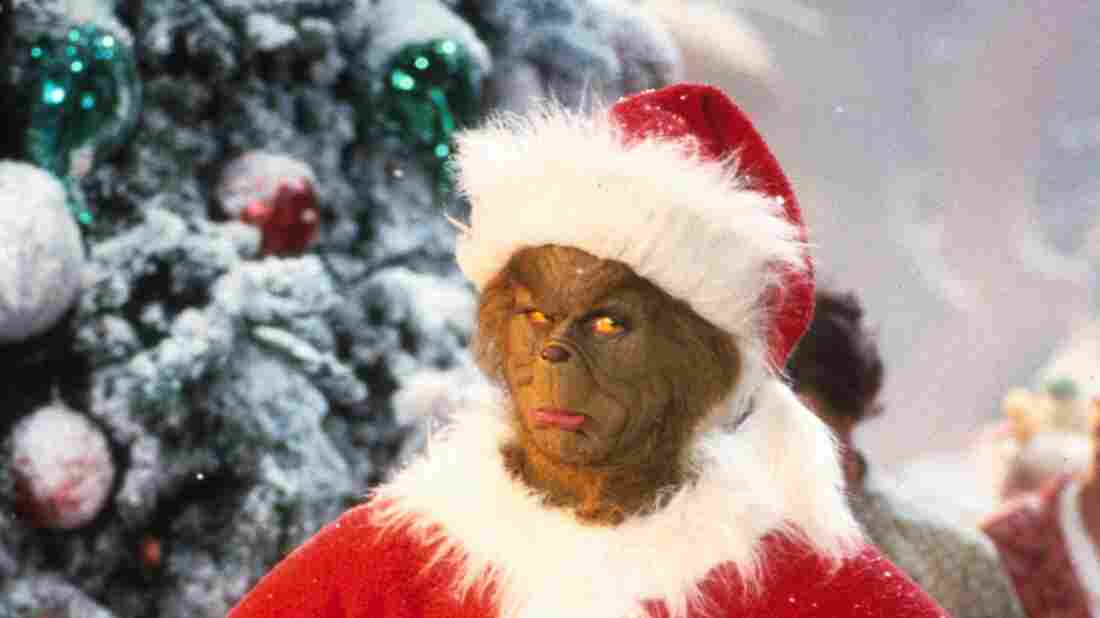 The Grinch learned to love; can Jen Chaney's heart be filled to overflowing by love of Love Actually? Getty Images hide caption 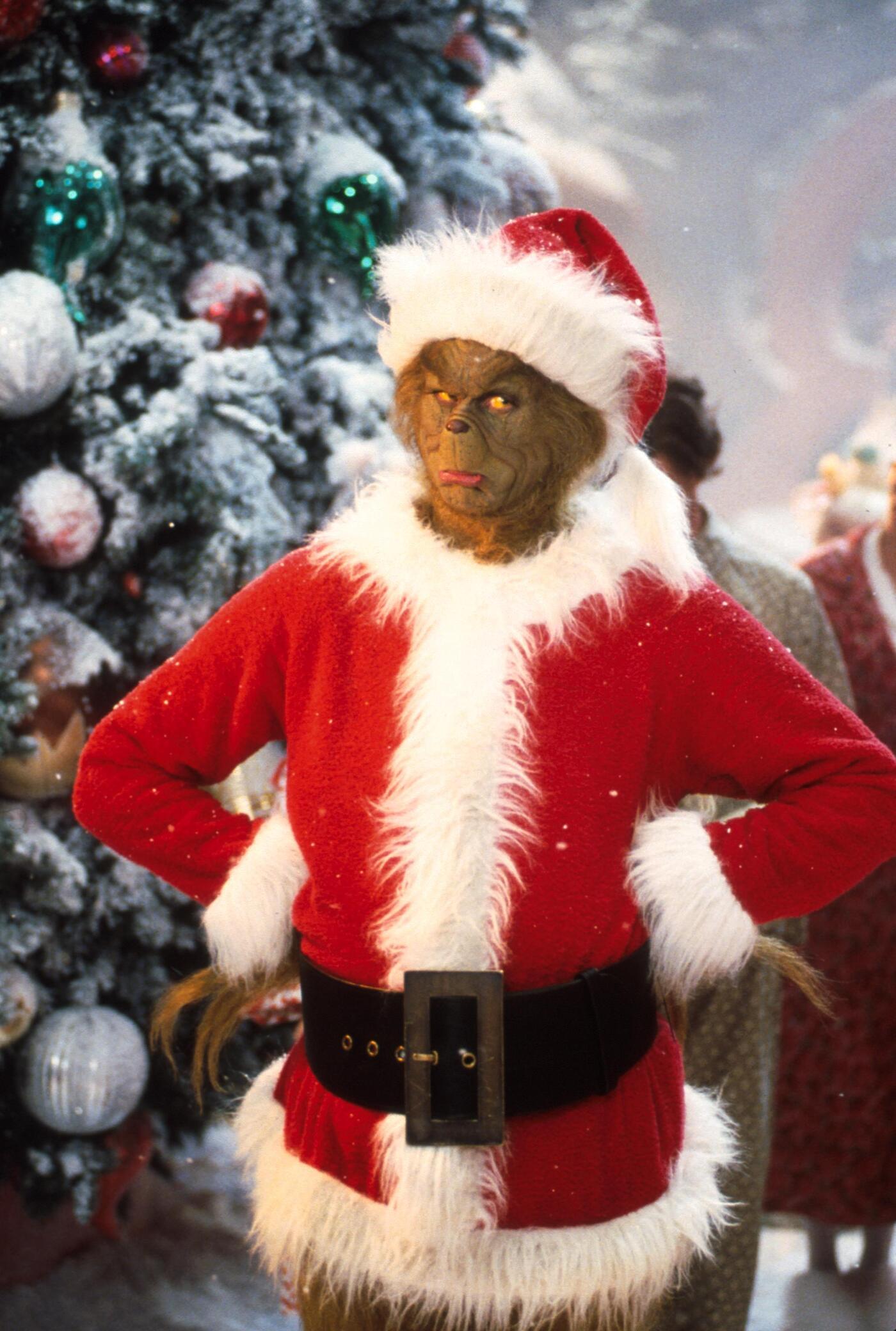 The Grinch learned to love; can Jen Chaney's heart be filled to overflowing by love of Love Actually?

Jen: I have just re-watched Love Actually. And my heart has grown no sizes this day.

I will grant you this: Upon re-watching, I will admit that the passage of time has, purely by coincidence, made certain elements of this film more pleasurable/poignant.

It's hilarious, in retrospect, that half of the AMC lineup is represented in this movie. (January Jones of Mad Men? Present. Rick Grimes from The Walking Dead? Totally here and totally trying to steal the wife of his best friend, Solomon Northup, even though that is fundamentally not right. Someone from Breaking Bad? Sure, let's throw in Elliott, co-founder of Gray Matter, and have him be in charge of the climactic Christmas concert.)

It's also sad to think that Lynden David Hall, the gentleman who leads the vocals in the wedding performance of "All You Need is Love," and which I will concede is quite lovely, died of cancer 2 1/2 years after Love Actually was released.

And there's an added poignancy to watching Liam Neeson talk, within the context of this film, about losing his wife, knowing that a short time later, the actor lost his real wife, Natasha Richardson.

But man, this movie has serious, serious problems.

Tanya: I think how you feel about the movie may depend on your frame of mind when you first saw it. I know I watched it at home, alone, on New Year's Eve cuddled up with two cats (that's how I remember it anyway) and well, I had no love, actually, at the time and this movie made me feel hopeful. It's treacly. And not serious cinema. And the "Glasgow Love Theme" running through it does not help. 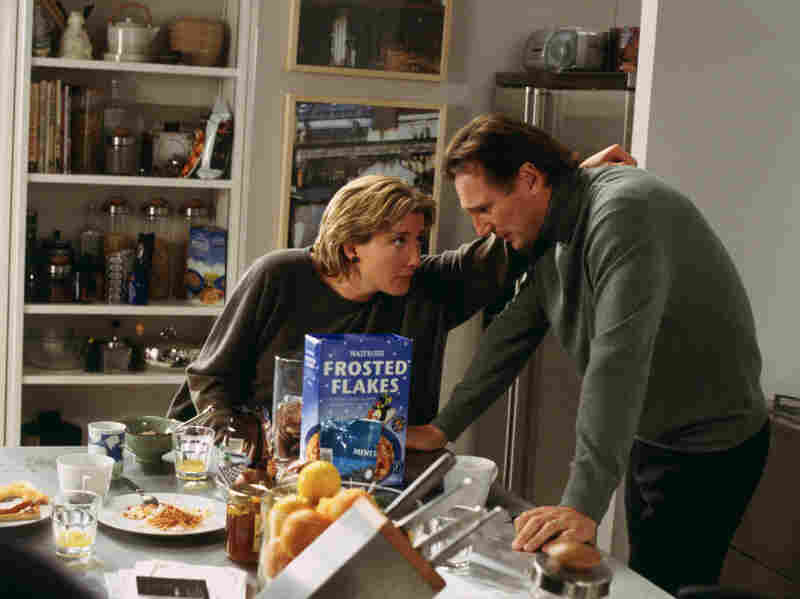 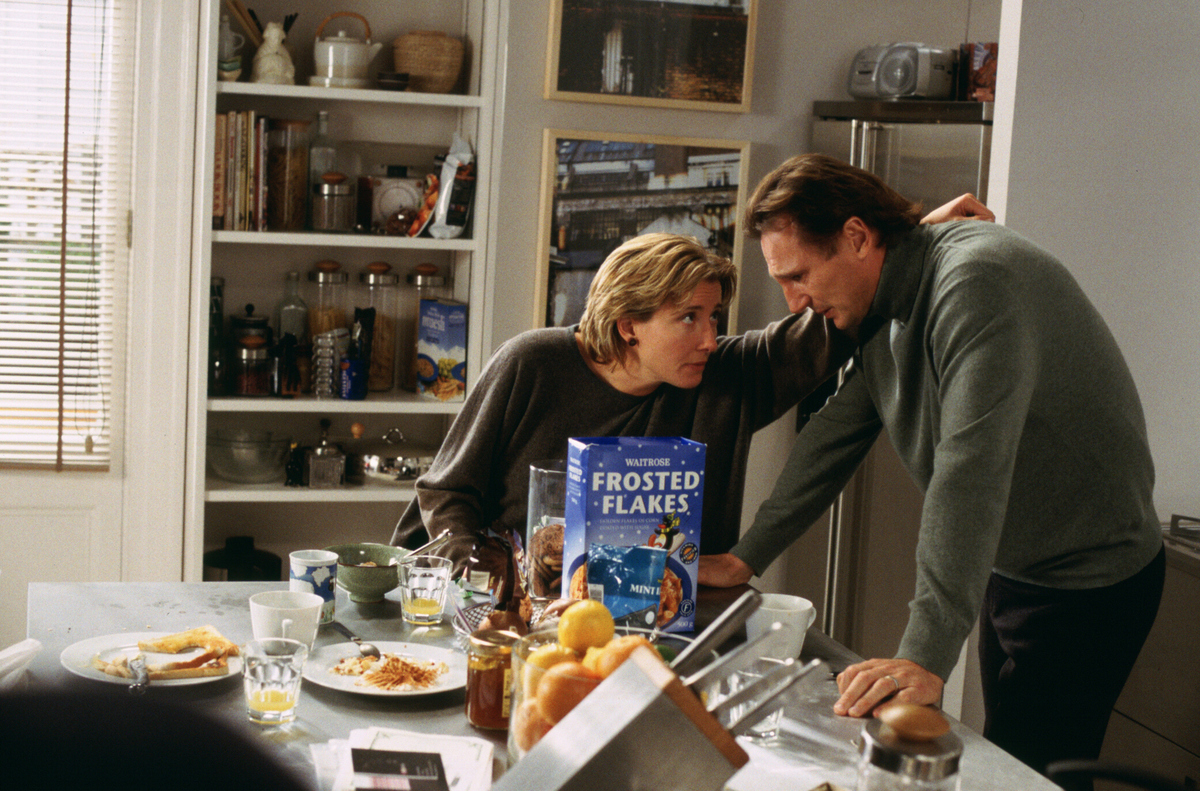 But, there are moments when it's wonderful. The friendship between Karen (Emma Thompson's character) and Daniel. Karen's admiration and affection for her big brother, the prime minister. Sara's (played by Laura Linney) devotion to her brother, even when it squashes the chance of, at the very least, a hot night with hot Karl (played by Rodrigo Santoro). The longtime married people friendship and comfortableness between Karen and Harry (played by Alan Rickman).

Jen: Karen is by far my favorite character. And despite all the hot young ladies parading around in their lingerie — this movie is obsessed with the scantily clad — I think she's the most beautiful woman in the whole movie.

Since you mentioned it, let me tell you about my first experience with this movie. Pull up a chair ... no, no wait: Dash madly through an airport and then pull up a chair.

Tanya: OK, but be quite quick, please.

Jen: I first watched this on DVD with my husband, at home. He walked out of the room at the moment that I think is this movie's official tipping point: the part where Hugh Grant starts shaking his rear all over 10 Downing Street, to the sound of The Pointer Sisters' "Jump."

"I'm out of here," announced my husband, and then immediately exited. I pressed on, however, because I believe in finishing any movie I start, no matter how preposterous. Unfortunately, Love Actually gets even more preposterous following Hugh Grant's attempt to jump — jump! — for our love.

A few years later, in 2006, I began writing what would become an annual list of "unconventional holiday movies" for The Washington Post. Every year, someone would demand that I put Love Actually on it. And every year, I would say, "No, that movie is bollocks!" And then it became a thing. You know how certain pop cultural fixations or dislikes can become a thing? Not liking Love Actually is one of mine.

Tanya: ::sighs:: But, Hugh shaking his bum and calling Margaret Thatcher a "saucy minx" are part of what I love about this movie. It's so ... not right. ::hugs Jen tightly:: Did I tell you that I kinda love Hugh Grant?

Jen: So its cornball, faux provocative attempts at humor are part of the appeal? Not judging, just clarifying.

And I never said it wasn't a Christmas movie. I just said it's a bad one, and therefore one I could not recommend on one of my lists.

Hey, look, I like Hugh Grant. I like him much more in a very vaguely Christmas-y, far superior rom-com called About a Boy, which everyone should run-go-watch right now.

But the prime minister is the second-worst plot in a movie with 855 plots (number approximate). Can someone tell me what the meeting when PM Grant and President Billy Bob Thornton was *actually* about? Anyone? Anyone at all?

Tanya: It was about creating more tension between Hugh and Natalie. She was "his" in his mind because he had a crush on her and her chocolate biscuits and tea.

Jen: Very little in this movie is about love, at least the real kind. And that includes Colin Firth's decision to propose to a woman whom he has had no real conversations with, mere weeks after realizing his girlfriend has been sleeping with his brother. 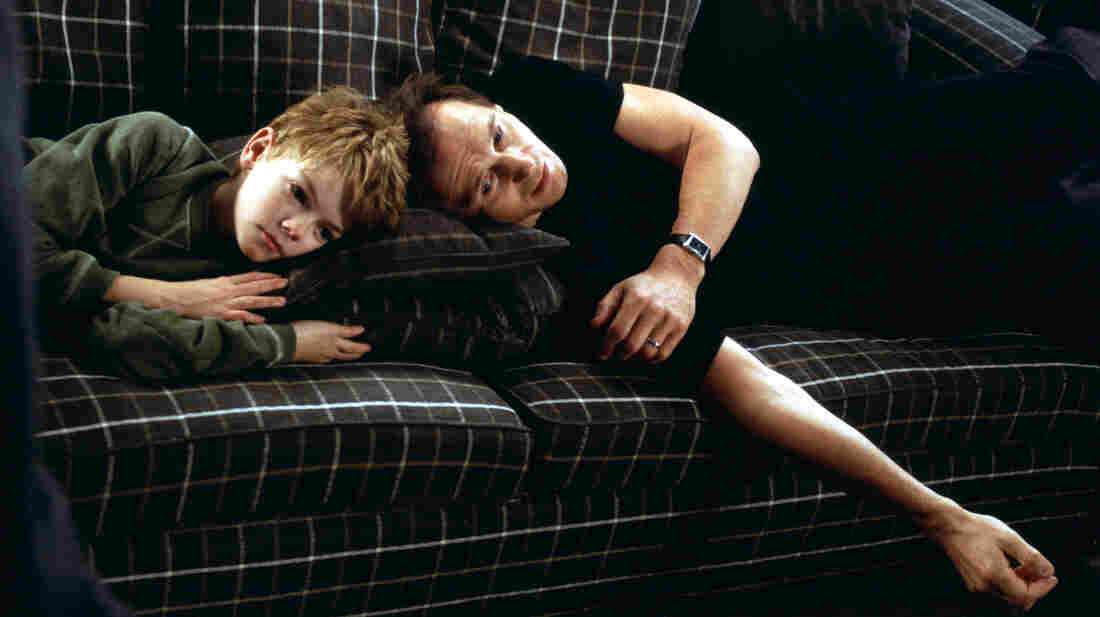 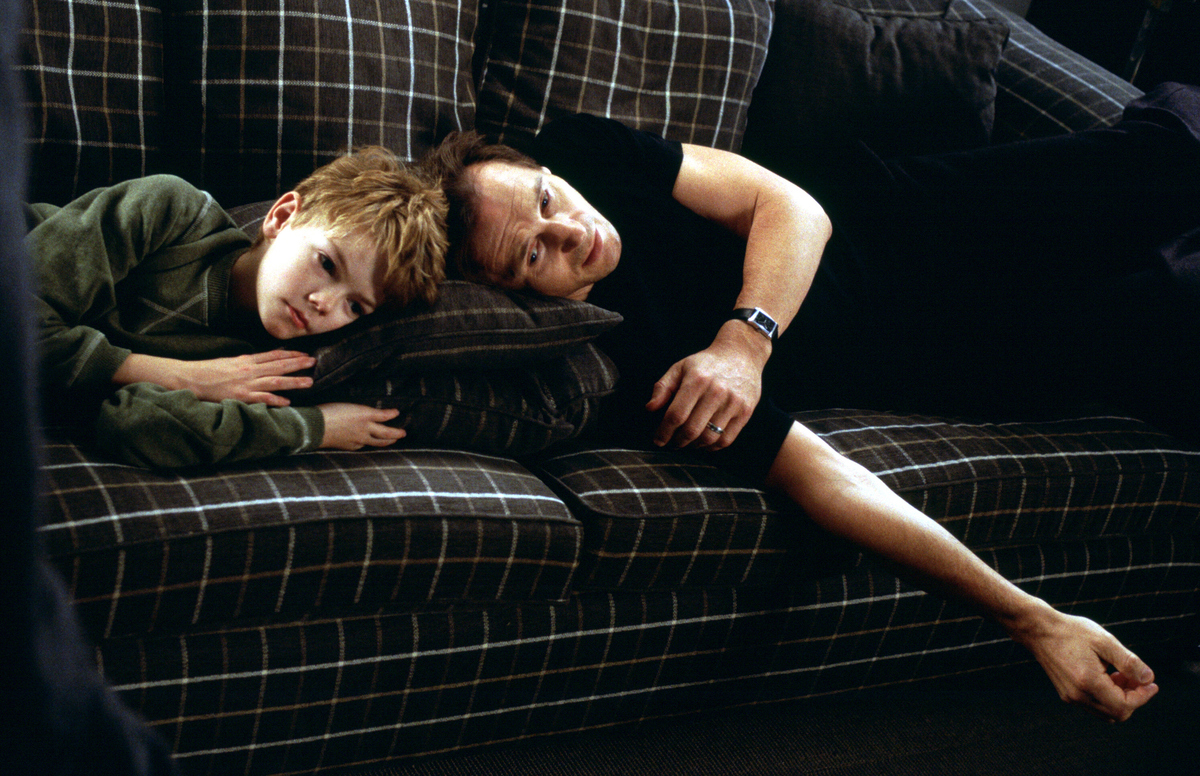 Sam (Thomas Brodie-Sangster) and his stepfather Daniel watch the movie Titanic to try to cure their love woes.

Tanya: I disagree about little in this movie being about love. Daniel loves that little boy. Billy Mack (played by Bill Nighy) loves his ugly manager. Karen loved her husband, otherwise she would not have been so hurt when she found out about the necklace. THERE IS LOVE IN THIS MOVIE! :::shakes fist at sky:::

I will give you this: The Colin Frissell storyline was bollocks. I always skip over that because I don't care, it makes no sense and it is not about "love."

Jen: OK. I agree that the movie attempts to portray other kinds of love, too. And I like the *idea* of that. I even like the opening and closing scenes of real people greeting each other in airports. In those few moments, there is more authenticity than there is the entirety of the rest of the film. Those scenes are the equivalent of an Upworthy post or a Buzzfeed list of the top 50 things that will make you feel good about humanity.

I actually think this movie is less about real love than it is about love in the movies, as has been said in one of the 8 jillion posts already published during the Love Actually Wars of 2013. I don't think Richard Curtis was operating on that meta of a level, at all. But if you watch this from that standpoint, it makes it a little more interesting.

Tanya: I give you this opening monologue as I may have run out of defenses other than, I like it and I like you so LIKE IT ALREADY CHANEY! RUN THROUGH THAT AIRPORT AND GIVE IT A KISS.

Whenever I get gloomy with the state of the world, I think about the arrivals gate at Heathrow Airport. General opinion's starting to make out that we live in a world of hatred and greed, but I don't see that. It seems to me that love is everywhere. Often it's not particularly dignified or newsworthy, but it's always there — fathers and sons, mothers and daughters, husbands and wives, boyfriends, girlfriends, old friends. When the planes hit the twin towers, as far as I know, none of the phone calls from the people onboard were messages of hate or revenge — they were all messages of love. If you look for it, I've got a sneaky feeling you'll find that love actually is all around.

Jen: Like I said: totally Upworthy. And then Hugh Grant dances, and Colin Firth falls in love with, essentially, a pair of underwear that speaks Portuguese, and that guy who is basically the British version of Matthew Lillard goes to a "typical American bar" in Wisconsin and meets three hot women, who introduce him to two more hot women. AND NONE OF THAT IS A DREAM SEQUENCE.

Basically, what you're telling me is that if I stop the movie after the opening monologue, I will think this movie is great. Agreed, Tanya.

Tanya: No noooooo, just focus on Liam Neeson and the boy, then focus again on Karen and Harry. And maybe the sex scene people. And the school play with the lobsters at the birth of baby Jesus. And Sara with her brother. There are moments, I tell you!

The little girls asking the prime minister to sing carols while he trolls the dodgy end of the street looking for Natalie.

Jen: Moments do not a great, re-watchable movie make.

Jen: We are obviously not going to agree, so let's get down to the crux of the issue:

What frustrates me about terrible rom-coms like this one is that when a romantic comedy is really great, it's magical. It's wonderful. It doesn't happen often. As this Movie Mezzanine piece notes, romantic comedies have basically gone out of vogue. That piece also refers to the '90s as a golden era for the rom-com, which is wrong. It was a prolific era, a time when studios would greenlight any half-baked, lovey-dove idea because: Julia Roberts.

Anyway, when people say that Love Actually is wonderful, it saddens me. This genre can do better. This genre deserves better. For the love of God: Expect more out of movies so we can save this genre.

Tanya: I see Love Actually as Christmas fluff, something to watch and laugh to (at?) during the holidays. It's also a reminder to reach out to my loved ones, be they platonic, romantic or familial.

But I agree that more and better is a good goal. Let's hug and drink some eggnog.

Jen: Wait, wait. We agree on something?

Tanya: It seems we do, actually.