Accessibility links
Nine Months In Nigeria, One Brilliant, Difficult Funk Musician Nigerian funk musician William Onyeabor has been a mystery for years. Since recording in the 1970s and '80s, he has completely dropped off the music map. When Luaka Bop Records wanted to assemble some of his work, the road to securing a signed contract took on its own twists. 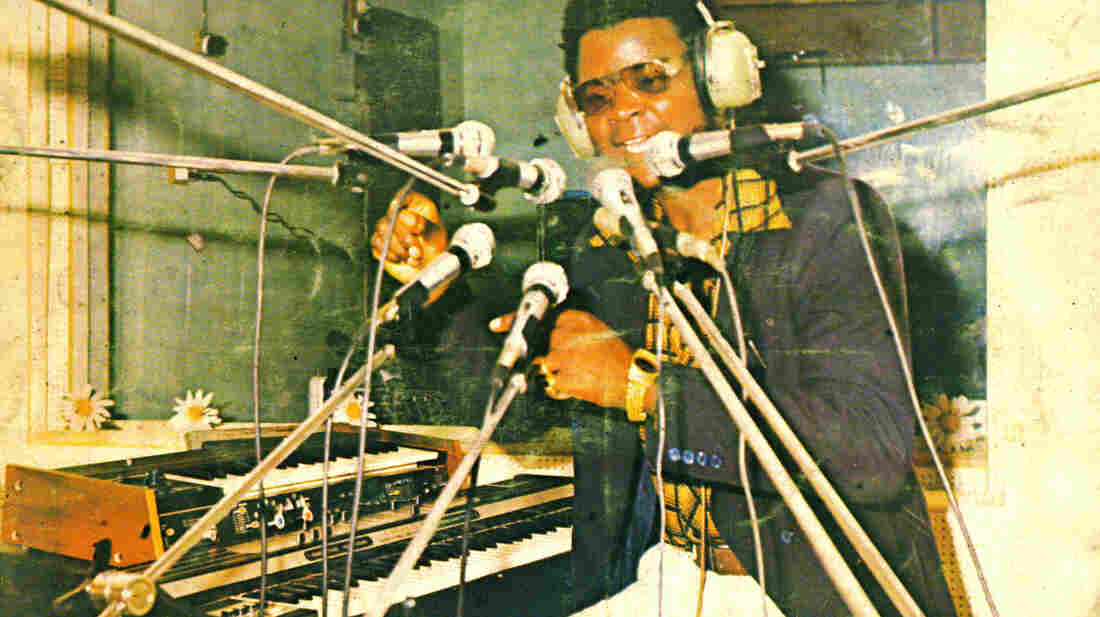 Since recording in the 1970s and '80s, Nigerian William Onyeabor has dropped off the music map. Courtesy of the artist hide caption

Yale Evelev, head of world music label Luaka Bop, digs up information about great-but-forgotten musicians for a living. His quest to compile and release the work of Nigerian funk legend William Onyeabor, though, was a unique challenge.

In the 1970s and '80s, Onyeabor put out eight albums of layered, wildly imaginative synth-funk. But he halted recording in the mid-1980s and converted to Christianity. Since then, if you mention his life in music around him, he stops the conversation dead.

Naturally, rumors rushed in to fill the vacuum: Onyeabor had gone on to run a flour mill; he went to film school in Soviet Russia; he went to study law in London. His legend grew and grew. Evelev called the man and tried to get him to confirm if any of the rumors were true.

Most artists are thrilled when Luaka Bop comes calling. For Evelev, this went beyond eccentricity; Onyeabor became a nightmare.

The Plan Was Simple

The idea for the compilation was brought to Luaka Bop by Uchenna Ikonne, a Nigerian writer, DJ and record producer and an expert on his home country's music.

"I originally had planned to put the project out myself, but then I decided that it was bigger than I could handle at the time," Ikonne says of his decision to pitch the idea to Evelev. "The issue was to get the rights to the work, and I said I would be able to do that, as I had already made contact with Mr. Onyeabor."

Evelev agreed that his label would take on the project, and Ikonne headed to Enugu, Nigeria, where both he and Onyeabor are from. With a contract and some advance money from Evelev in hand, Ikonne planned get approval from Onyeabor to do the compilation. He'd be back in the U.S. in a month.

"And somehow, I ended up staying there for over nine months," Ikonne says. "And I came back without the deal."

Evelev remembers the moment well. "Uchenna comes back to where he lives in Boston," he recalls, "and says, 'You know, I'm kinda embarrassed, but I gave him the advance money because he was going to go to the bank that day. I was supposed to go back the next day to sign the contract, but the next day never happened. So he has the money, but I don't have the contract.' "

Three years would pass before Onyeabor would sign off on the project. What happened during Ikonne's nine months in Nigeria is a story all its own.

Ikonne knew he was in for a bumpy ride. He'd heard the rumors of Onyeabor's legendary temper, that he was "wicked," "unpredictable" and "evil." And the musician's Enugu home is far outside of town, off dirt roads.

Learn more about this release in NPR's coverage of the year in music.

The artist seemed nice when Ikonne first met him. "He's funny; he can be very warm. But he can turn. When he turns, he's hard," Ikonne says. "After I finished dealing with him, I didn't listen to his music for maybe two years, because just hearing his voice would almost give me an anxiety attack. "

Negotiations was were slow-going. At one point, Ikonne says, Onyeabor accused him of being an agent of Satan. But it was important to him not to quit.

"It's worth it in that I was able to deliver the executed contract to Luaka Bop," Ikonne says. "I'm a man who keeps his word. And I knew they were probably thinking at some point, 'So some Nigerian guy calls us up and says, 'Send me some money so I can get you this contract" and we just sent it to him!' ... It was important to me to deliver, to prove that I was not some guy who writes emails claiming to be the son of a king — you know, that whole deal."

And this year, it finally happened: Luaka Bop has released the first legitimate compilation of Onyeabor's music in October. It's called Who Is William Onyeabor? — a question Evelev never got him to answer.

William Onyeabor declined to be interviewed for this story.