Accessibility links
New Princesses Rescue Girls From A Distressed Damselhood The heroes of The Guardian Princess Alliance wait for no Prince Charmings: They battle to save the world from modern environmental threats, like genetically altered crops. 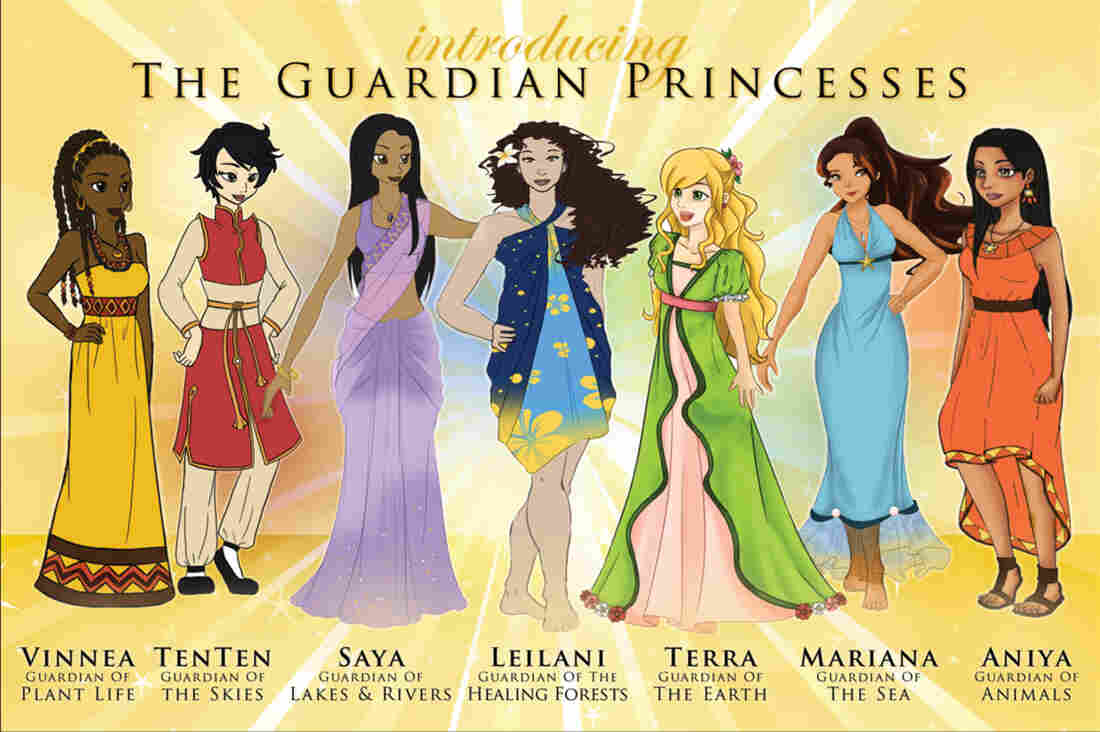 The Guardian Princesses, created by University of California, Riverside, professor Setsu Shigematsu, are a multi-ethnic group of heroines who each protect a different aspect of nature. Courtesy Setsu Shigematsu hide caption 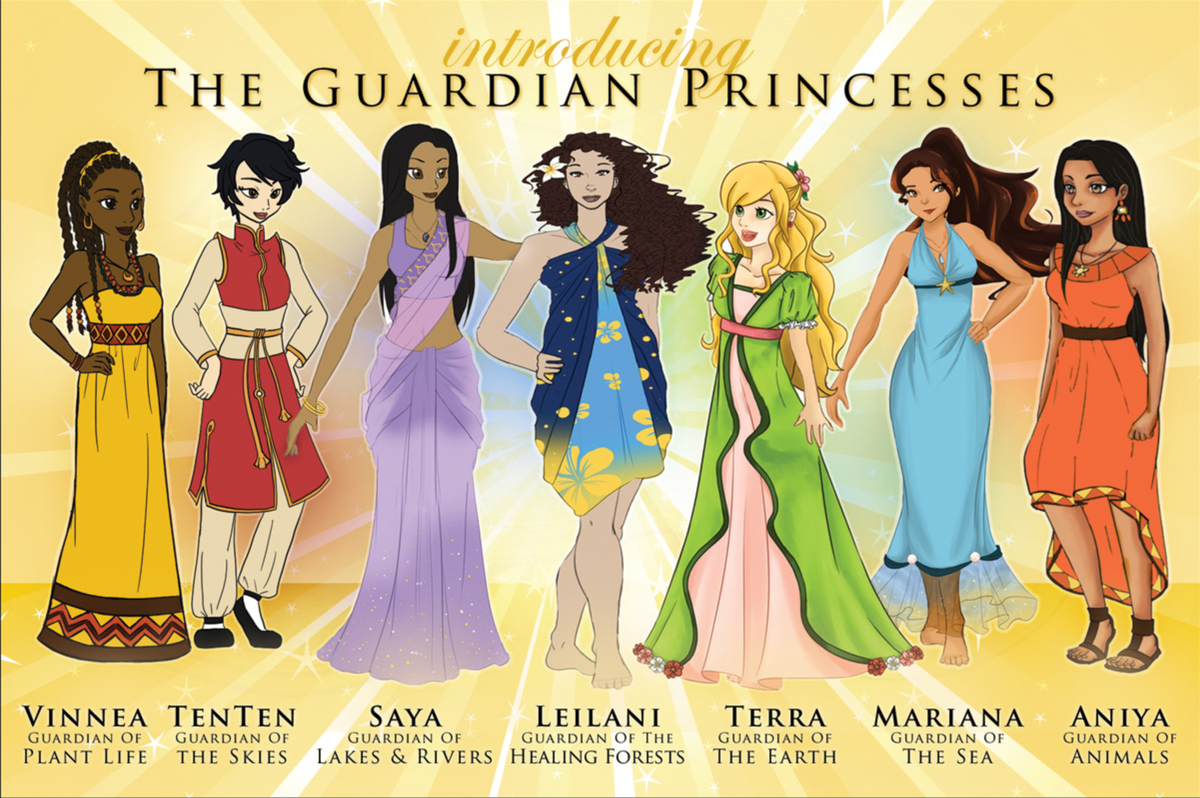 The Guardian Princesses, created by University of California, Riverside, professor Setsu Shigematsu, are a multi-ethnic group of heroines who each protect a different aspect of nature.

The princess industry is lucrative: DVDs, dresses, crowns, theme parties. But the story of going to the ball and waiting for Prince Charming is outdated.

So one Southern California mom has created a new princess series with modern sensibilities. Creator Setsu Shigematsu recasts princesses as environmentally conscious and not waiting around to be rescued.

At the heart of her series, The Guardian Princess Alliance, is what animates any fairy tale: simple storytelling.

"Once upon a time, there was a princess named Vinnea," begins the first book, Princess Vinnea and the Gulavores. Vinnea, a member of a collective of diverse heroines more active than their traditional counterparts, is of African descent and is the guardian of plant life.

She protects the kingdom from unwholesome food grown by magic instead of nature. 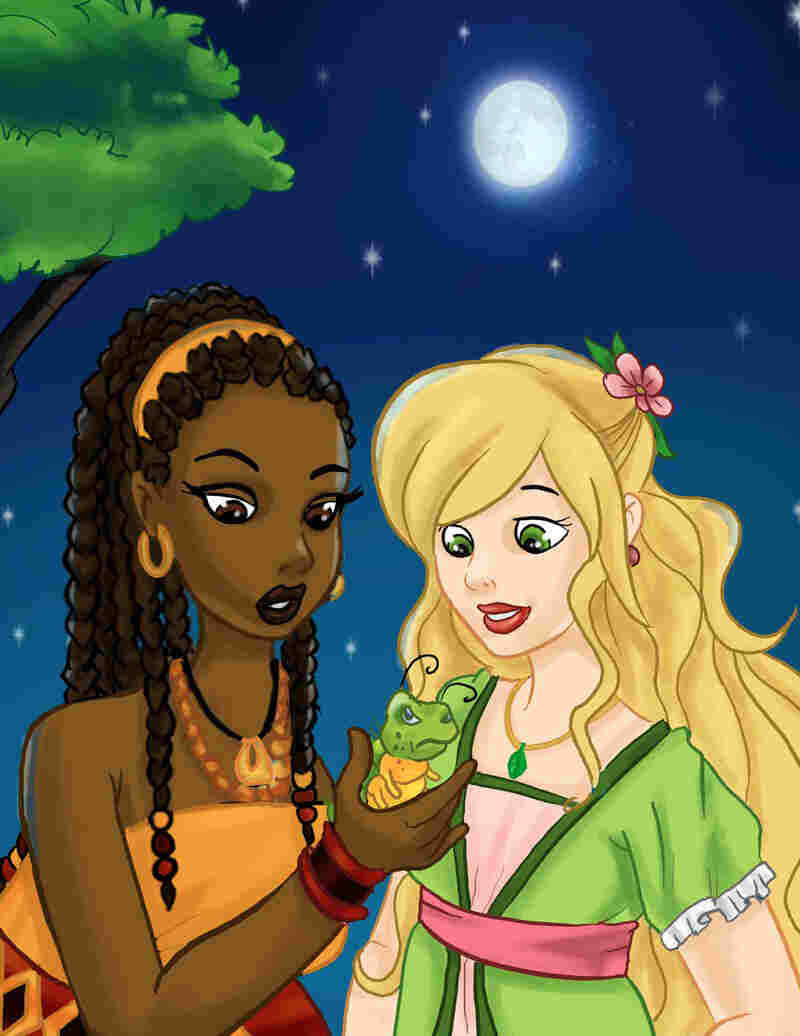 Princess Vinnea, guardian of plant life (left), and Princess Terra, protector of the land, examine one of many "gulavores" plaguing the land of Hortensis in the children's book Princess Vinnea and the Gulavores. Courtesy Setsu Shigematsu hide caption 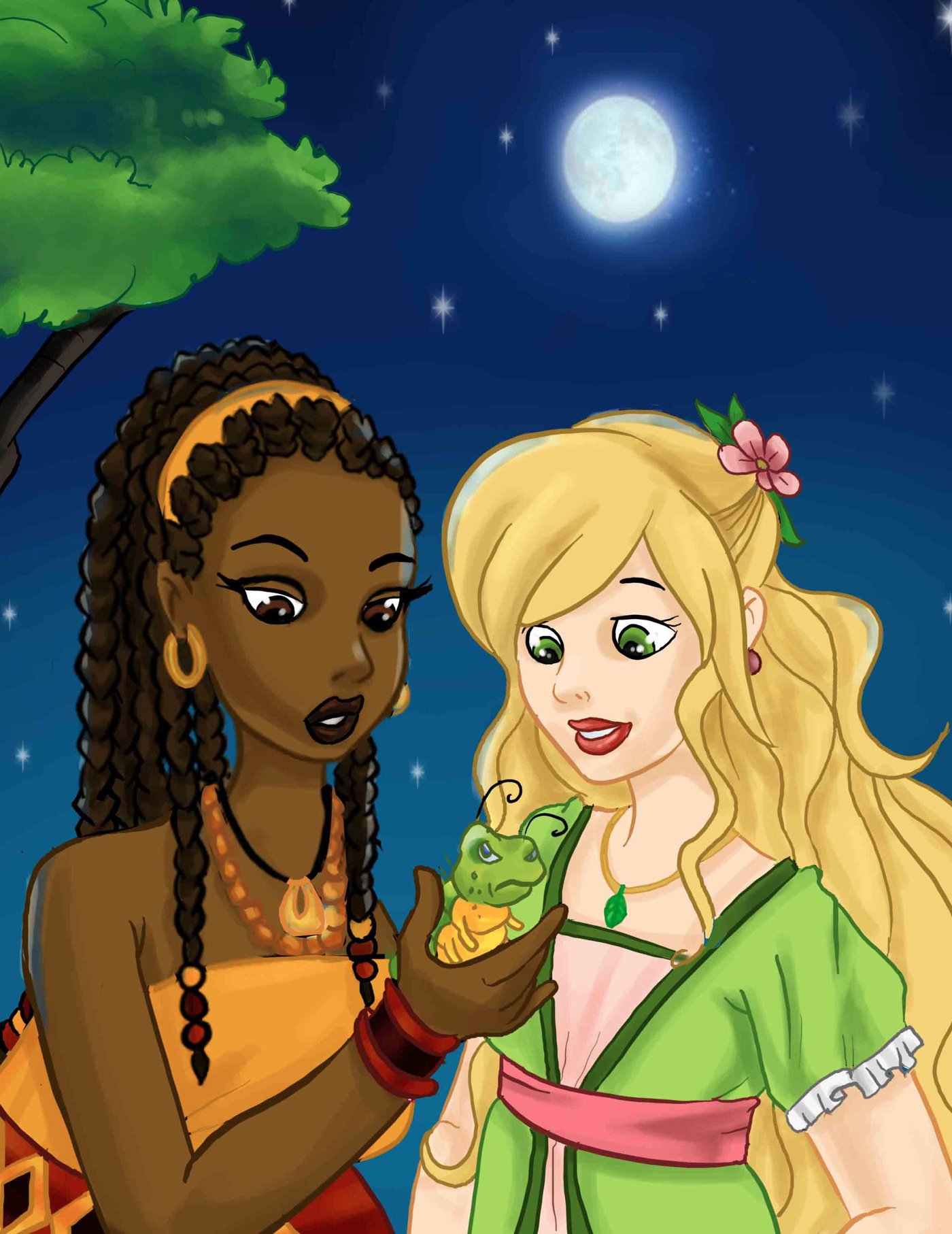 Princess Vinnea, guardian of plant life (left), and Princess Terra, protector of the land, examine one of many "gulavores" plaguing the land of Hortensis in the children's book Princess Vinnea and the Gulavores.

Shigematsu, a professor of media and cultural studies at the University of California, Riverside, thought the typical fairy tale needed an overhaul.

"For my daughter's fifth birthday, I decided to write an alternative princess story," Shigematsu says. "The kids really enjoyed it. But what was really surprising was the way the parents responded."

Parents told her she should publish, she said. Avoiding the years-long process of going through a major firm, Shigematsu is self-publishing the initial run of books, available in January.

A pair of 6-year-old fairy tale experts, Saya and Ivana, join Shigematsu at her home for an informal reading. When asked to describe princesses, the girls name the typical accessories.

"I think of princesses that have long hair," Ivana says. "They have pretty shoes."

"I think of princesses who have colorful dresses," Saya says.

But Risti Marco, Ivana's mom, says the Guardian Princesses provide better role models for her daughter than the traditional version.

"The Guardian Princesses, they are more like, go there and do it for yourself," Marco says. "You can do anything you put your mind into it. You don't have to wait for anybody. You can work together with Prince Charming and do stuff for the world, but you don't have to sit there and wait for him to rescue you."

While the books are already taking on a serious challenge — overhauling the princess archetype — Shigematsu says they're also written to align with Common Core, the educational standards adopted by 45 states.

More Princesses To Reckon With

Princess Marty Is A Smarty If She's At A Child's Party

Gay Kolodzik, owner of Frugal Frigate children's bookstore in Redlands, Calif., says for those in the world of children's literature, a Common Core designation is a pretty big deal.

"When I read all the publisher's magazines that I read every day, if they say 'Meets Common Core,' instantly I go right to it and look through it and see if it's something that suits the store and suits the people that shop here," Kolodzik says. "It gets my attention quickly."

The Guardian Princesses face no evil stepmothers or dangerous spinning wheels. Instead, Vinnea leads a life of social activism against unnaturally modified foods.

"These fruits and vegetables are not natural," Vinnea accuses a villainous gulavore in the book. "They contain a dangerous chemical, admit it. ... Dolo, you've ruined our garden in order to feed the people this unhealthy food."

Glass slippers might be impractical for getting the job done, but just because she's working hard doesn't mean Princess Vinnea can't wear shoes that are practical and pretty.