Accessibility links
The Shipping Forecast: From Britain's Seas Into Its Soul Britain is a maritime nation that a century or two ago boasted the world's largest navy. Today, the names of shipping areas in the surrounding seas are embedded in the British national psyche — thanks to the BBC's Shipping Forecast bulletin, a cultural phenomenon beloved by seafarers and landlubbers alike.

It is a bizarre nightly ritual that is deeply embedded in the British way of life.

You switch off the TV, lock up the house, slip into bed, turn on your radio, and begin to listen to a mantra, delivered by a soothing, soporific voice.

You are aware — vaguely — that these delicious words are names, and that those names refer to big blocks of sea around your island nation, stretching all the way up to Iceland and down to North Africa. 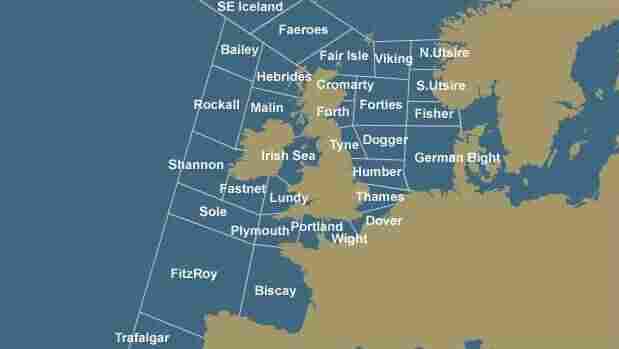 The BBC's beloved Shipping Forecast bulletin covers 31 sea areas, the names of which have inspired poets, artists and singers and become embedded into the national psyche. BBC hide caption 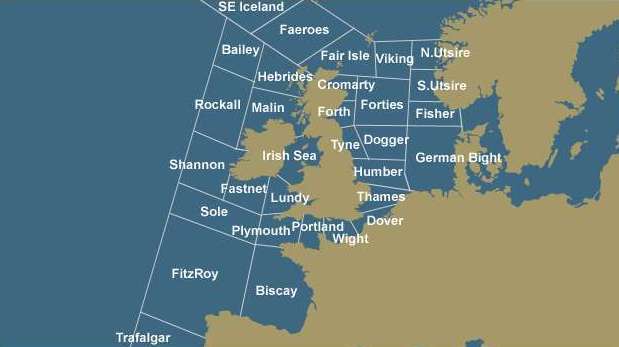 The BBC's beloved Shipping Forecast bulletin covers 31 sea areas, the names of which have inspired poets, artists and singers and become embedded into the national psyche.

Your mind begins to swoop across the landscape, sleepily checking the shorelines, from the gray waters of the English Channel to the steely turbulence of the Atlantic.

Somewhere, deep in your memory, stir echoes of British history — of invasions from across the sea by Vikings, Romans and Normans; of battles with Napoleon's galleons and Hitler's U-boats.

Finally, as the BBC's Shipping Forecast bulletin draws to a close, you nod off, complacent in the knowledge that whatever storms are blasting away on the oceans out there, you're in your pajamas, sensibly tucked up at home.

The fact that you know nothing much about the sea, and cannot tell a freighter from a futtock (part of a wooden hull), is beside the point.

For you, listening to the BBC's Shipping Forecast every night is about something else entirely.

You're paying homage to an institution that is as much part of the jigsaw that makes up Britain's national culture as drizzle and warm beer.

Why does the Shipping Forecast mean so much to so many in the U.K.?

For one, the weather still actually matters for many coastal communities, such as the tiny island of Lundy off southwest England, home to 28 people. There's the Tyne in the northeast — one of the 31 sea areas that feature in the forecast — once a maritime hub for Britain's mighty coal and shipbuilding industries where the "Geordies" are now striving to find a new role for their community. And in the ancient southern seaside town of Hastings, the same families have been fishing for centuries.

But for many Britons, the Shipping Forecast is much more significant than a weather bulletin for the fishermen and sailors who make their living from the oceans.

A very large number of regular listeners are landlubbers. They are, however, fiercely loyal.

BBC Radio 4 broadcasts the Shipping Forecast four times a day, but the late-night bulletin — shortly before 1 a.m. — possesses a particular mystique. It's not uncommon for listeners to ask for the music that introduces it — "Sailing By" — to be played at their funerals.

A few years back, when someone suggested changing the bulletin's timing by just 12 minutes, there were angry speeches in Parliament and indignant newspaper editorials.

A Mysterious, And Inspiring, Appeal

Exactly why the Shipping Forecast is held in such affectionate esteem by the British public is a topic of considerable discussion in the U.K.

Many people compare the forecast with listening to poetry. The BBC's Arlene Fleming is one of the presenters of the forecast: "It is poetry! ... There is a natural rhythm to it," she says, "just like the sea."

This may help explain why the Shipping Forecast has enthused so many artists over the years.

It has inspired poetry by neighboring Ireland's late, great Seamus Heaney and also Britain's Poet Laureate Carol Anne Duffy. It arises in art; it's referenced in TV shows, movies and songs — such as Blur's "This is a Low," and Thomas Dolby's "Windpower," which actually ends with a sample from a broadcast.

A snippet from the bulletin cropped up in Danny Boyle's widely acclaimed opening ceremony of the 2012 London Olympics. Comedians aplenty have tried their hands at parodies of the forecast.

Peter Jefferson presented the Shipping Forecast on the BBC's airwaves for 40 years.

In his book And Now The Shipping Forecast, Jefferson offers this explanation: "There is something in many of us that likes the certainties of life and is averse to change.

"The Shipping Forecast is a comfort, a given, a sign that maybe, just maybe, everything is alright with the world after all — until the next day dawns, anyway — but that's a few hours of delicious sleep away! Time for the febrile mind to repair itself, rest, chill out, relax and take gentle stock of things."