Accessibility links
Even An 85 MPH Highway Can't Fix Austin's Traffic Tangle The Texas capital is growing rapidly, and its roads and freeways are packed. A toll road was built east of the city to help alleviate the problem, but few drivers use it. Experts agree that the city has to do something — and soon — to address its congestion woes if Austin is to retain its quirky character. 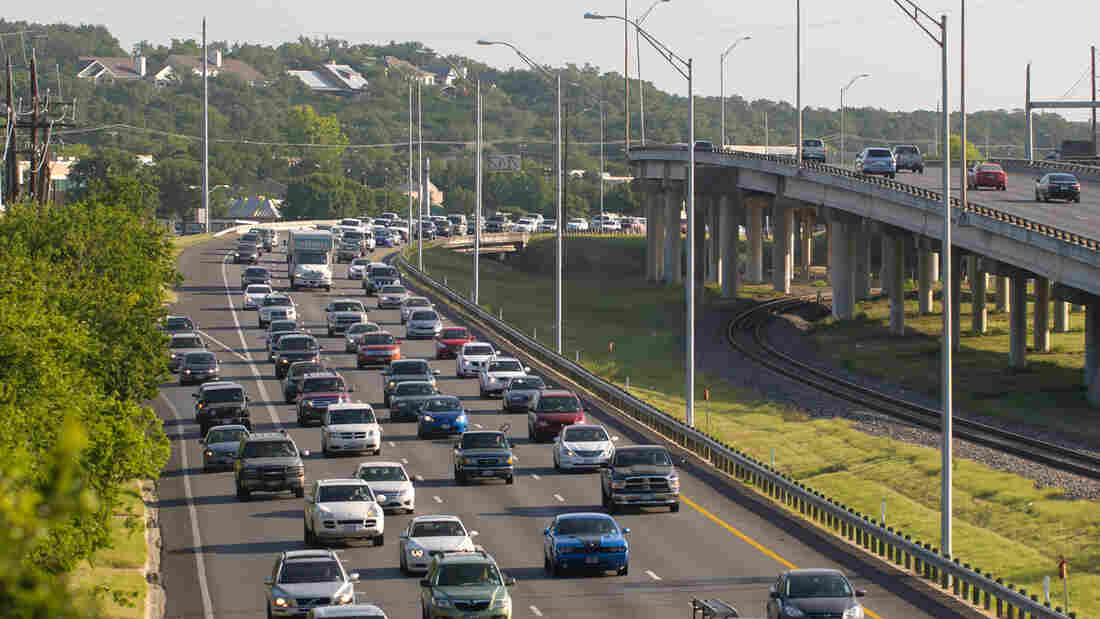 With a rapidly growing population and very limited mass transit options, Austin now ranks among the nation's most congested cities — but has done little to address the traffic problem. Courtesy of the Central Texas Regional Mobility Authority hide caption 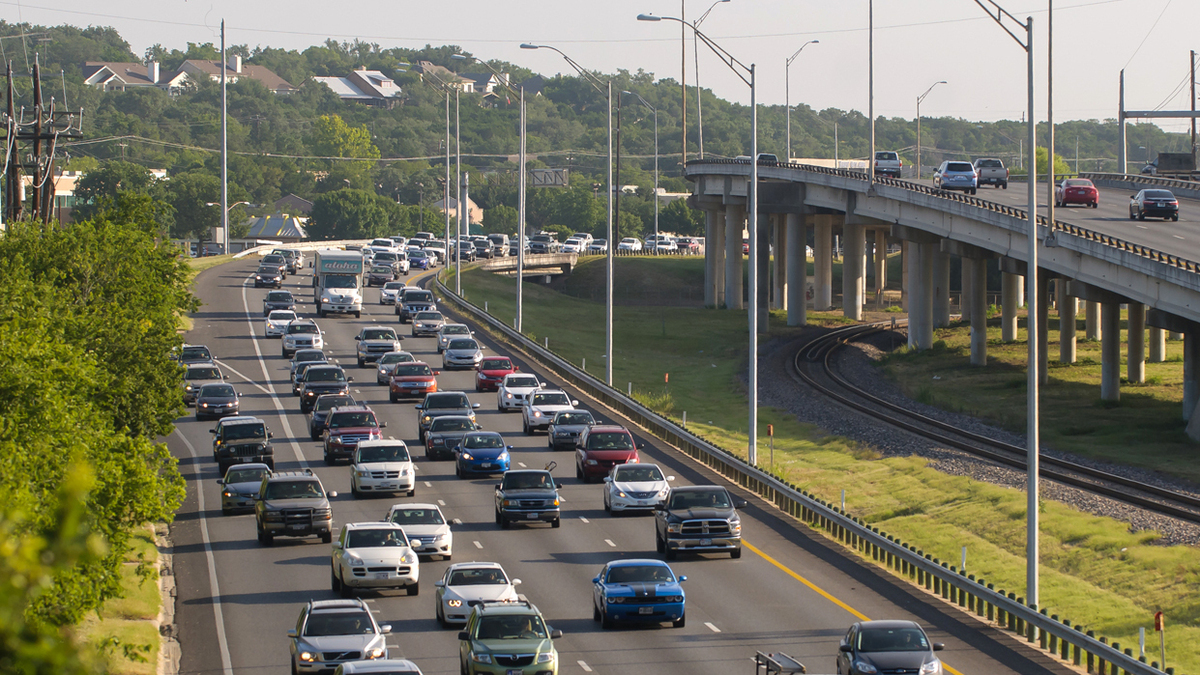 With a rapidly growing population and very limited mass transit options, Austin now ranks among the nation's most congested cities — but has done little to address the traffic problem.

Four decades ago, Austin, Texas, had a population of 250,000 and a reputation as a laid-back oasis of liberal politics and live music. Today, the Austin metro area is home to 1.8 million people and has some of the nation's worst traffic congestion.

For years, the city has done little to address the growing problem. But most in the Texas capital now agree something has to change if Austin is to save what's left of its quirky character.

The best way to experience Austin traffic may be from inside the police department's new helicopter. Breathtaking in the late afternoon sunlight, the state Capitol and the University of Texas Tower glow like torches.

But tear your eyes away from the skyline to look down and — poof! There goes your pretty picture. Nearly everywhere you look, the roads are backed up with cars, pickup trucks and 18-wheelers crawling along.

The technical word we use is 'awful.' If you do all of the scenarios that we normally think of as transportation improvements, it's still going to be awful.

Police officer Ryan Miller is up in the sky nearly every day, and he says he has seen Austin's traffic grow exponentially worse during the past five years. Now, a large portion of the city's inhabitants must plan their daily activities with the traffic in mind.

"There was kind of an epiphany — a moment in time when we realized that we are going to have to quit ignoring the problem, which we'd done for so many years in the past," Leffingwell says.

An 'If We Don't Build It, They Won't Come' Mentality

While Austin fiddled decade after decade, Dallas was busy building the largest light rail system in the country. Thirty years later, the Texas city with the conservative reputation has the regional mass transit network, not Austin. Austin has done practically nothing in that regard.

"I think that is a fair statement," Leffingwell says. "There's a very strong no-growth movement in our city. And that applies not only to transportation but other infrastructure." 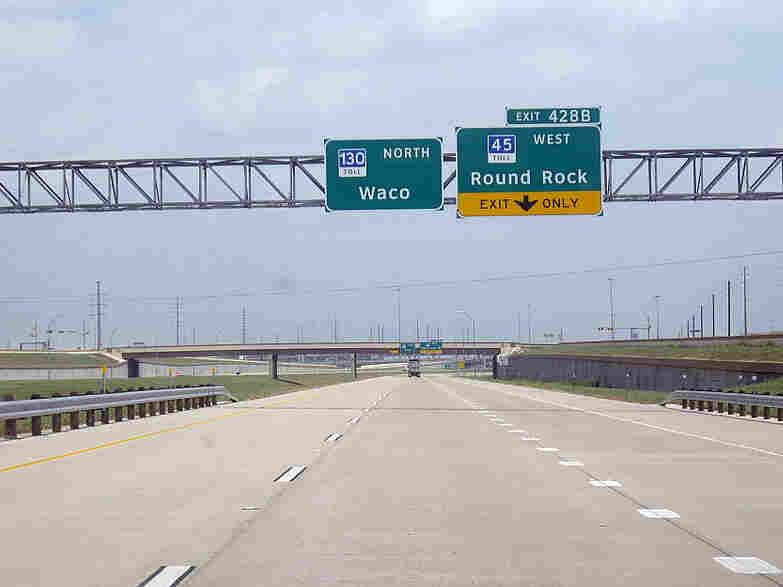 Texas Highway 130, a new Austin bypass toll road, is so far east of the city that it sees little traffic. The state recently raised the speed limit there to 85 mph in hopes of boosting its use. Wikipedia hide caption 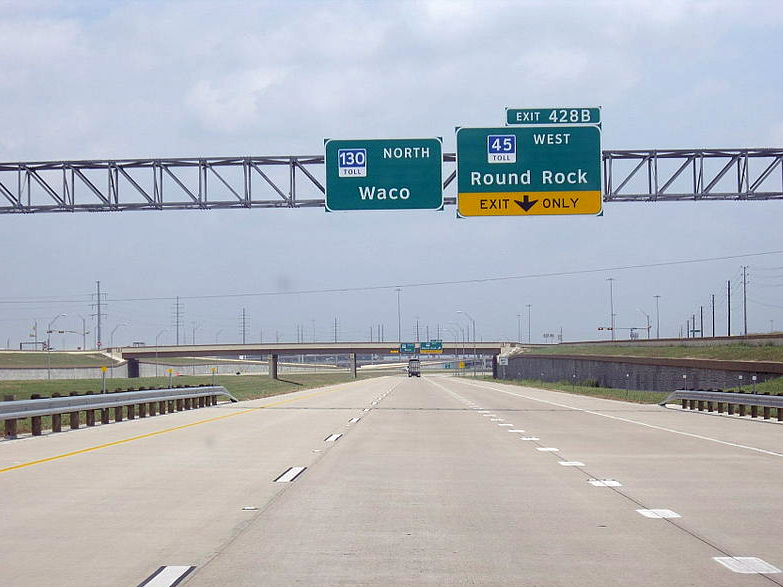 Texas Highway 130, a new Austin bypass toll road, is so far east of the city that it sees little traffic. The state recently raised the speed limit there to 85 mph in hopes of boosting its use.

"And that is absolutely wrong in my view," he continues. "The growth trend has been steady and constant since 1870, and there's no indication that anything is going to change."

In fact, the Austin metro area is predicted to double in population over the next 25 years to 4 million people.

The Texas A&M Transportation Institute has built sophisticated computer modeling of Austin's future traffic — and the findings are not good. The commute from downtown Austin to the northern suburb of Round Rock currently takes about 45 minutes during rush hour. But by 2035, the institute estimates, it will take two hours and 30 minutes to go those 19 miles.

"The technical word we use is 'awful,' " Lomax says. "If you do all of the scenarios that we normally think of as transportation improvements, it's still going to be awful."

Trying To Lure Drivers With Speed

Austin is the largest city in America with only one interstate running through it. Just six lanes wide through downtown, Interstate 35 backs up for miles regularly.

A tolled bypass to the east of Austin was supposed to help relieve the bottleneck. But Texas state Highway 130 was built so far to the east that practically nobody uses it.

In desperation, the state raised the toll road speed limit to 85 mph, the fastest in the nation. The idea was that drivers could drop the top, drop the hammer, crank the music and fly right past Austin.

It's a beautiful, wide-open highway — but it's empty, and the builders are nearly bankrupt. So now, the state is considering tolling Interstate 35 and making the toll road free — as well as building a light-rail system and putting in more bike lanes.

But Lomax says his computer models show the only real solution is going to involve changes in behavior and lifestyle.

"We did some modeling to suggest the kind of magnitude of change," he says. "We used a giant hammer on the travel model. We took away 40 percent of the work trips. We said those are going to happen somehow, but they're not going to happen in a car."

To keep traffic flowing in his sophisticated models, Lomax plays God of Austin.

If Austin can do all that, Lomax says, the roads and highways in his computer models stay the color green — traffic still flowing. But without those drastic changes in behavior? The entire region turns into red capillaries of doom, with everybody crawling along everywhere almost all the time.

Like many in Austin, businessman Kevin Tuerff moved here to attend the University of Texas and never left. Ten years ago, he bought his dream home in the Austin Hill Country. Traffic has become a mess as the population has exploded.

By last year, Tuerff was fed up with two hours on the road every day. Now he rents a high-rise apartment in a gleaming new building downtown.

"My office is about five minutes by car or 12 minutes by bicycle," he says. "And that's what I love about this place."

Tuerff is part of that 40 percent that Lomax needs to make his transportation models work. And there's a growing population of successful professionals paying $3,000 to $5,000 in rent every month for the privilege of walking and biking to work and play.

But what about Austin's many musicians and artists — and, in fact, everybody else?

"I used to feel like I could go anywhere in 12 minutes," says Amy Scofield, a successful artist who has lived and worked in Austin for more than 22 years. "And I still have that mentality, and now I'm late all the time. And I'm stressed out all the time because a 12-minute trip takes 25 at least."

As the city Scofield loves has grown from a lovely university town into something bigger, she has considered leaving.

"I thought that about five or six years ago. I was really looking for someplace else to go. I felt like everybody's driving a [Porsche] Boxster and wearing a Rolex, and I don't relate to this population," Scofield says. "But I couldn't think of any place. Because I want this kind of — the attitude, the political mindset, the social mindset, but I also want warm weather."

Scofield calls this "the velvet rut" of Austin. It is shared by many here, and that's the problem in a nutshell: not enough leaving, plenty more coming, and nobody, old or new, wanting a fleet of bulldozers plowing up their pretty city.

Austinites sometimes wear T-shirts that protest the relentless growth with the slogan "Keep Austin Weird." They have their work cut out for them.