Accessibility links
Economists, Unemployed Fret Over Long-Term Jobless Aid Lapse Democrats in Congress are promising to try to retroactively extend emergency unemployment benefits after the new year. The expiration of the benefits may satisfy some fiscal conservatives, but it has some economists and many desperate job-seekers concerned. 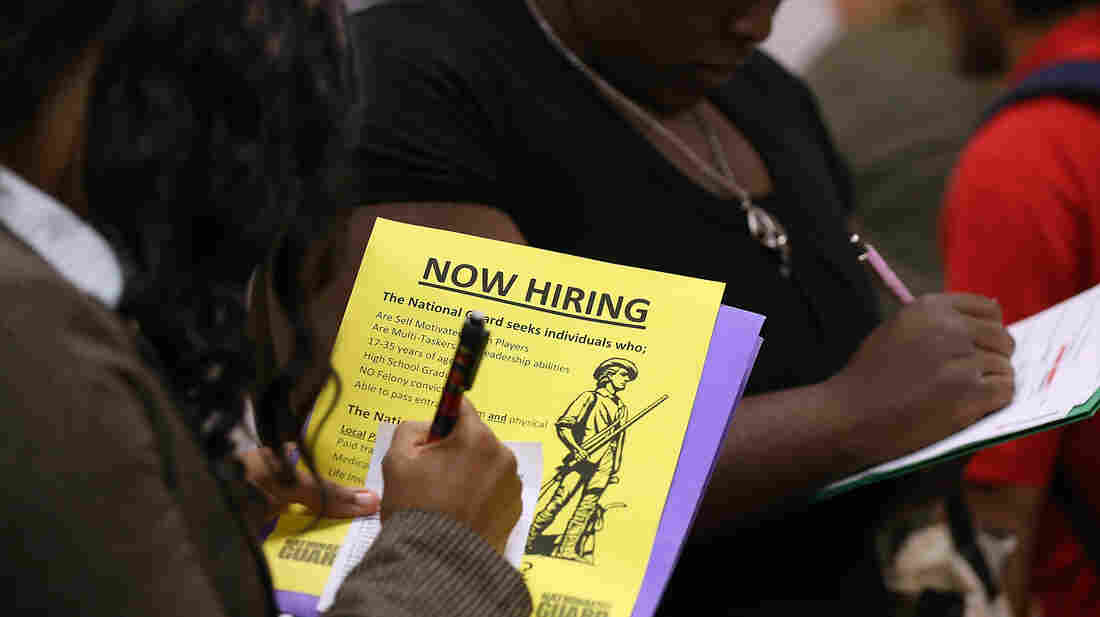 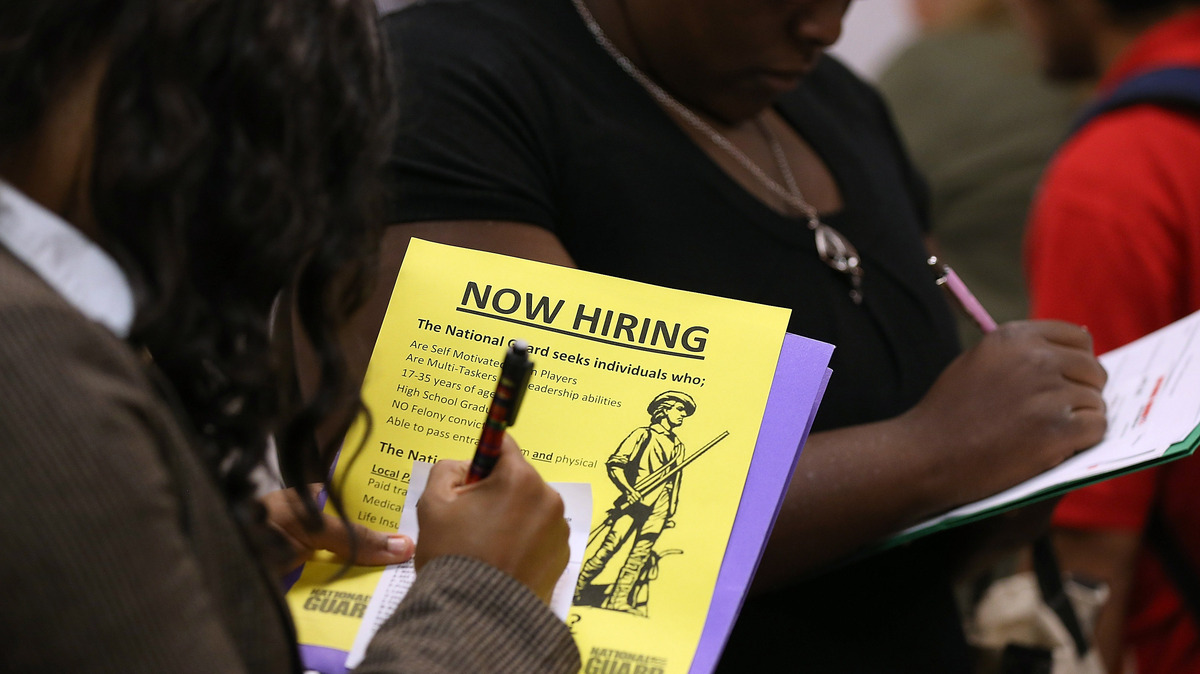 Attendees of a job fair in California in October fill out paperwork.

Democrats in Congress are promising to try to retroactively extend emergency unemployment benefits after the new year. With the House already in recess, the benefits are expected to expire at the end of the month.

The Senate is still in Washington working on a bipartisan budget agreement passed by the House before it left town last week, but the bill does not include a benefits extension.

Extending the jobless aid is something the White House pushed. Without a congressional action, those who have been receiving benefits for more than six months will stop receiving checks as of Dec. 28. That may satisfy some fiscal conservatives, but it has some economists — and many unemployed workers — concerned.

Sheri Minkoff of Pittsburgh, Pa., is one of those about to lose the only source of income she's been able to find in nearly a year.

"I'm not worried about a career at this point. I just want a job," she says.

This is Minkoff's second time on unemployment in five years. The first time, she lost her job as a director of a nonprofit that had invested money with convicted Ponzi schemer Bernie Madoff.

"I had gone through all my retirement, all my savings, my son was working to help support us — my high school student," she says. "I mean, we tried everything under the sun. It's not a fun living on unemployment."

Two years later, the job she found as a volunteer coordinator at a domestic violence shelter paid far less. But that, too, lost funding at the beginning of this year. And despite working six days a week trying to find a job, Minkoff, 50, says she can't even get a call back.

There are over a million people like Minkoff who have received unemployment benefits for longer than the usual 26 weeks.

Long-term unemployment is a lasting legacy of the Great Recession. Five years ago, the Bush administration and Congress extended jobless benefits to up to 99 weeks. Gradual improvement in the labor market has brought the number of long-term jobless down from the peak two years ago. But still, 1.5 million Americans have been unemployed for over two years.

Christine Owens is executive director of the National Employment Law Project, an advocacy group for workers.

"Those who have been unemployed the longest face so many obstacles, not the least of which is a perception on the part of many employers that there must be a reason they've been out of work for so long and they must not be really up to snuff," Owens says.

Michael Strain, a resident scholar at the American Enterprise Institute, notes that the percent of the workforce that's long-term unemployed stands at 2.6 percent.

"That's just much higher than what we've seen in the past when we've terminated emergency federal [unemployment insurance]. It's twice as high as in the past three recessions. So my first argument would be that long-term unemployment is just much too high right now to terminate these benefits," Strain says.

He says it may even make more fiscal sense, in the long run, to extend unemployment insurance, or UI, benefits.

"Some of them are going to end up on government welfare rolls. It's obviously impossible to know for sure one way or the other, but it's very possible that extending emergency federal UI could save the government money over the next 20 or 30 years by preventing some people who otherwise might end up on Social Security disability insurance or something like that from going on it," Strain says.

Disability insurance is, of course, for those with disabilities. But the number of people receiving it increases in a tight job market. And this year that trend has continued.

Strain says he also believes there are solutions beyond just cutting checks — like creating transportation programs for those living in far out suburbs to get to work, or giving people money to move to better job markets.

"Right now I think we should think of long-term unemployment as an economic problem, sure, but also kind of as a social failure," he says. "Thinking about it that way adds urgency to the need to actually try to be creative and come up with solutions to help these folks."