Accessibility links
Some Competitors Say Free-Diving Needs A Safety Sea Change Free-diving is a risky sport, involving swimming deep into the ocean without the aid of air tanks. But after a diver's death in November, some free-divers worry that the sport's governing body is still not doing enough to prevent common injuries and reel in overambitious competitors. 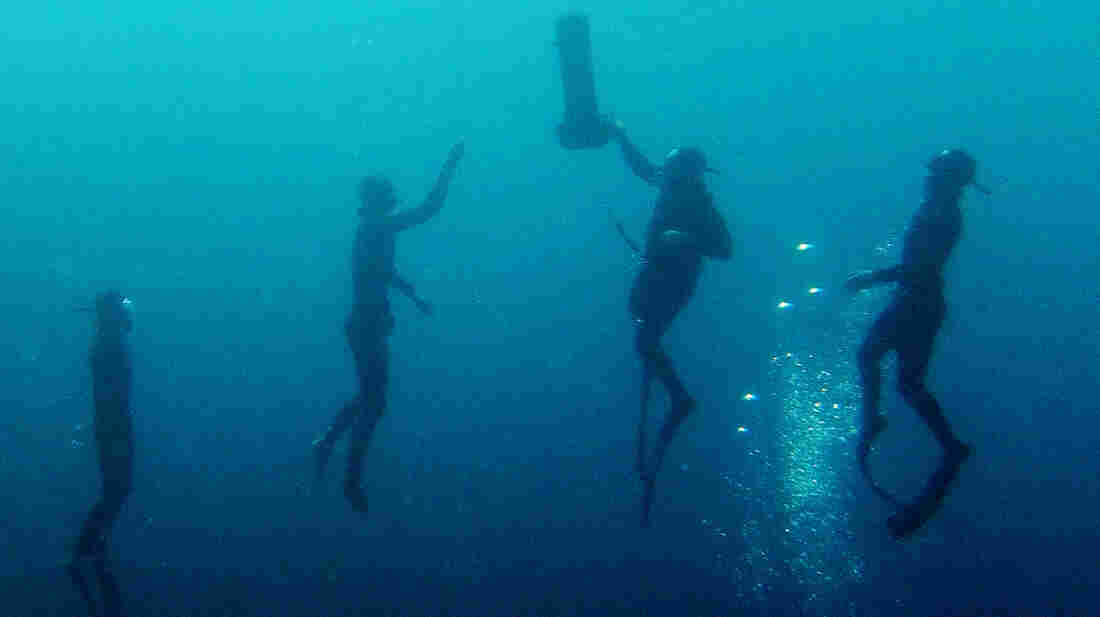 Polish free-diver Mateusz Malina (second from right), accompanied by judges and safety divers, at the Little Blue Hole free-diving competition in Dahab, Egypt, last month. Malina blacked out on this dive, but on the previous day he broke the Polish national record for free-diving without fins by diving 272 feet. Charles Lane/WSHU hide caption 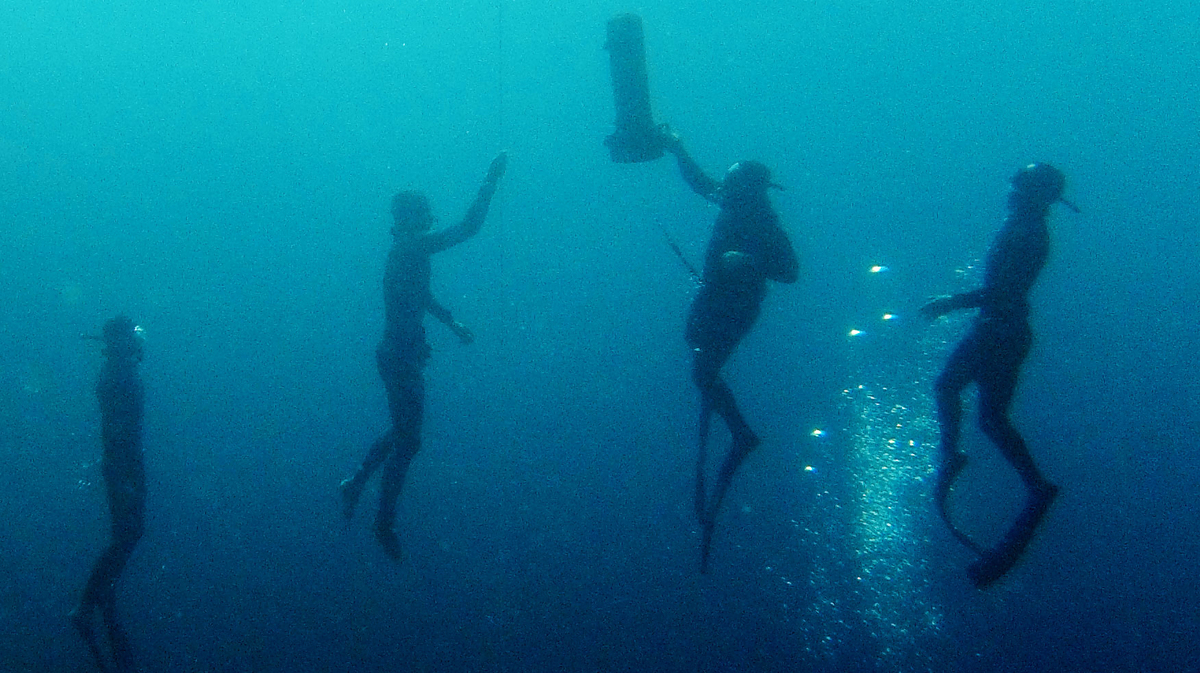 Polish free-diver Mateusz Malina (second from right), accompanied by judges and safety divers, at the Little Blue Hole free-diving competition in Dahab, Egypt, last month. Malina blacked out on this dive, but on the previous day he broke the Polish national record for free-diving without fins by diving 272 feet.

Dahab, Egypt, just north of Sharm el-Sheikh on the Sinai Peninsula, is perfect for free-diving. A diver can have tea in a simple beach cafe and then take just a handful of steps into the Gulf of Aqaba, where the seafloor plunges more than 100 yards into a wine-glass-shaped blue hole.

Free-divers, who take a breath, swim as deep into the ocean as possible and then come back up, come to Dahab from across the world to compete. But a diver's death in November has raised questions about the safety of the sport, with some divers saying too little has been done to cut down on overly ambitious competitors and common injuries.

At a recent competition in Dahab — the first since diver Nick Mevoli died in the Bahamas — a dozen competitors had strung their yellow buoys out in a row across the blue hole. Each buoy had a weighted rope attached, which the divers followed down into the blue abyss.

One ... two ... then three minutes would go by. And then, a diver would come back up with a tag that proved he had reached the bottom.

But not all the scheduled divers competed that day. Maxim Iskander, a Canadian-Egyptian free-diver, withdrew from competition because of an injury known as a lung squeeze. 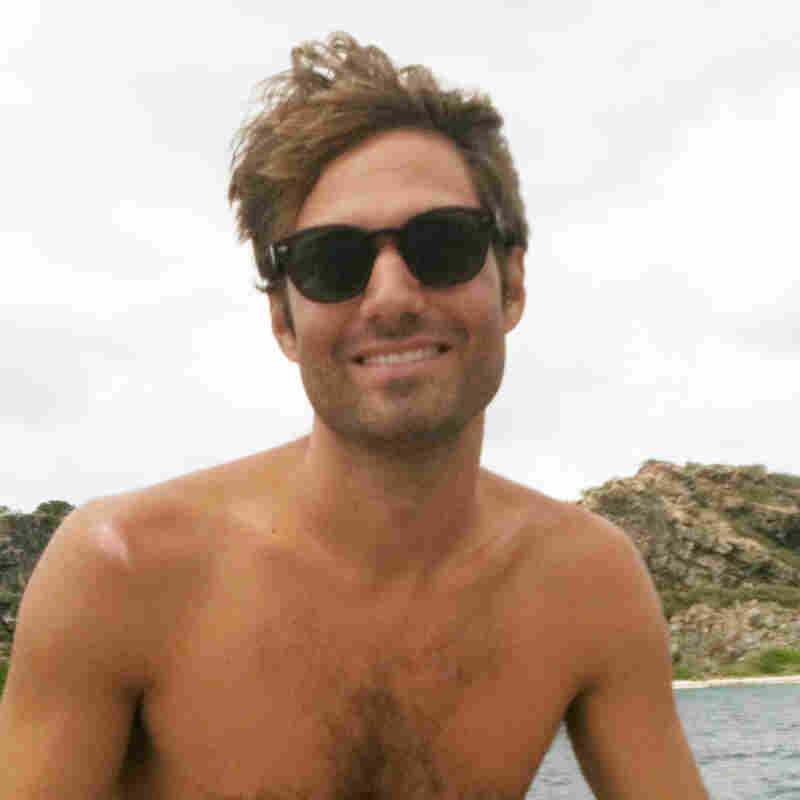 Nicholas Mevoli smiles while diving in Curacao in October. He died a month later following an attempted dive in a free-diving competition in the Bahamas. Daan Verhoeven/Barcroft Media/Landov hide caption 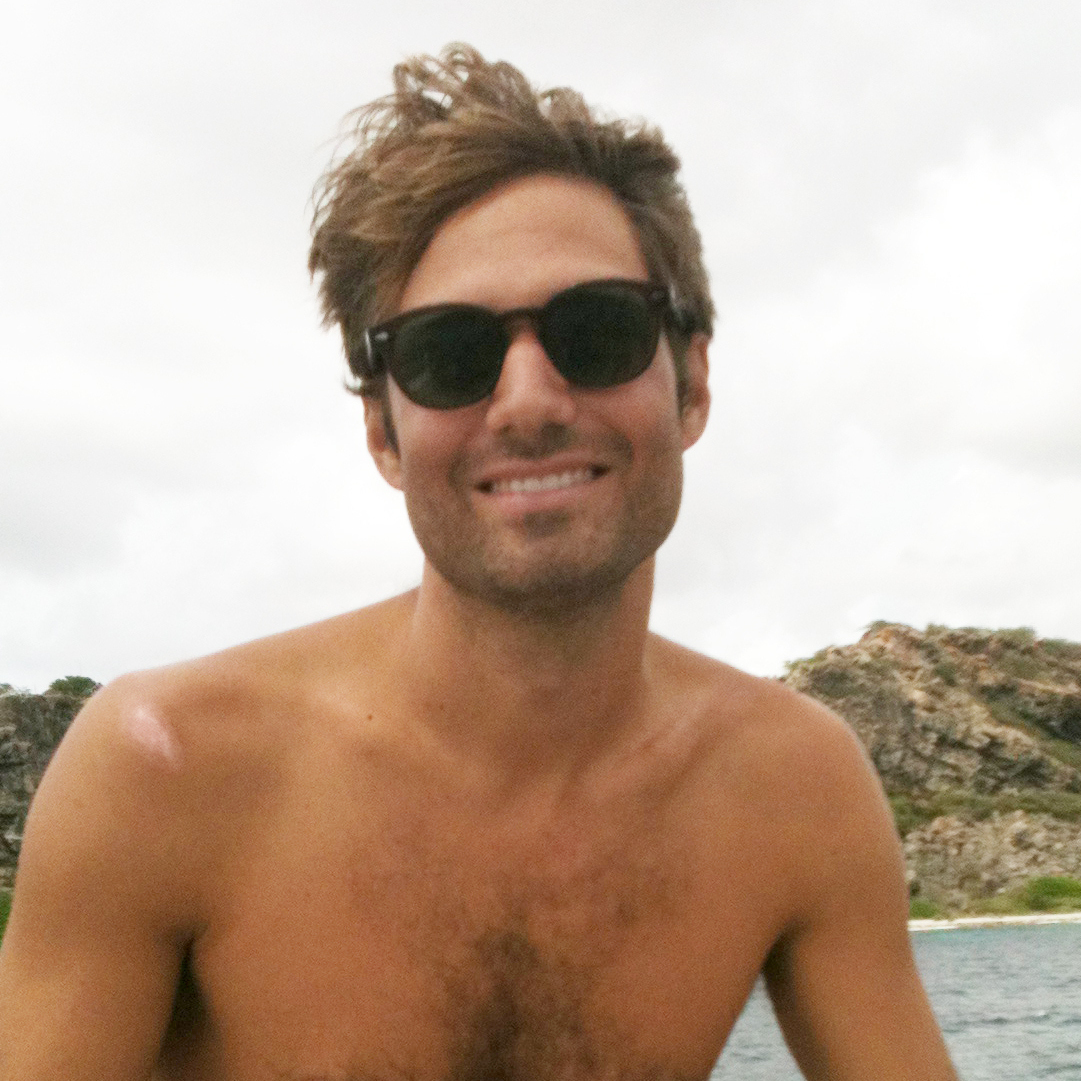 Nicholas Mevoli smiles while diving in Curacao in October. He died a month later following an attempted dive in a free-diving competition in the Bahamas.

"How did I know? I spit a little bit of blood," Iskander says. "Not that much, but enough to tell you, OK, something happened."

Competition officials haven't yet determined the official cause of Mevoli's death, but everyone in the community knows the telltale signs of a lung squeeze: blood and shortness of breath.

When the body dives deep, the weight of the water presses the lungs and the air sacs inside. Picture a paper bag full of blueberries; when your hand's relaxed, you can compress the bag carefully enough to avoid squashing the berries. But any twists or jerks can cause ruptures.

Mevoli contorted his body several times on his last dive, aborting twice, only to turn back down to finish. Iskander calls that extreme.

"Personally, I would have never even thought about doing anything similar to that because there is a very high risk of squeezing then," Iskander says.

In the first competition since Mevoli's death, organizers asked divers not to compete if they had experienced a squeeze in the past month. They also limited the depth by which divers could attempt to exceed their personal record.

"We all sat here thinking the sport is very safe. And obviously we've got to react to this until we get some feedback ... to see what the results of Nick was and what actually happened," says free-dive instructor Brian Crossland, who was running the competition. "We've got to err on the side of caution."

Squeezes are common in free-diving. Judges and safety divers describe athletes surfacing, posing for YouTube and then ducking behind a buoy to spit up slicks of blood flecked with white body tissue.

'Doing What He Loved,' Deep-Sea Diver Dies After Record Bid

Sara Campbell, a four-time world record free-diver, says the sport has grown complacent with these injuries, like one she witnessed at the free-diving world championships in 2011.

"A fountain of blood. Everyone trying to help him was covered in it. It was gruesome," she recalls. "Once they got him breathing again, he was taken to hospital, he was treated for the lung injury and he's fine."

On the one hand, Campbell and others blame overly ambitious competitors who have seen other divers return from death unscathed, wrapped in a cocoon of safety divers and medics. Mevoli, she says, inherited this complacency.

Kimmo Lahtinen, AIDA's president, says the organization isn't covering anything up. Rather, he says, it's victim to the paralysis of an all-volunteer organization that's run democratically.

"When you try to lead this kind of multicultural and challenging organization, which is actually nonprofit as well, it's not easy to make fast decisions quite often," Lahtinen says. "So I can agree that we are not the fastest organization, maybe, in the world. But we try to do our best."

Lahtinen also says there are downsides to ramping up regulation. Competitors could start lying to judges and medical staff, he says, or worse, the sport could go underground, where there are no safety or education infrastructures.

Currently there is a special AIDA work group investigating the factors that contributed to Mevoli's death. Lahtinen says the report will likely recommend rule changes similar to those implemented at the Dahab competition.