Accessibility links
In One NYC School, A Snapshot Of Bloomberg's Education Legacy Since he took office, Mayor Michael Bloomberg has closed and consolidated schools, created hundreds of new ones and championed the use of data to measure performance. Washington Irving High School, scheduled to close in 2015, offers a window on the changes he's brought to the city's vast school system. 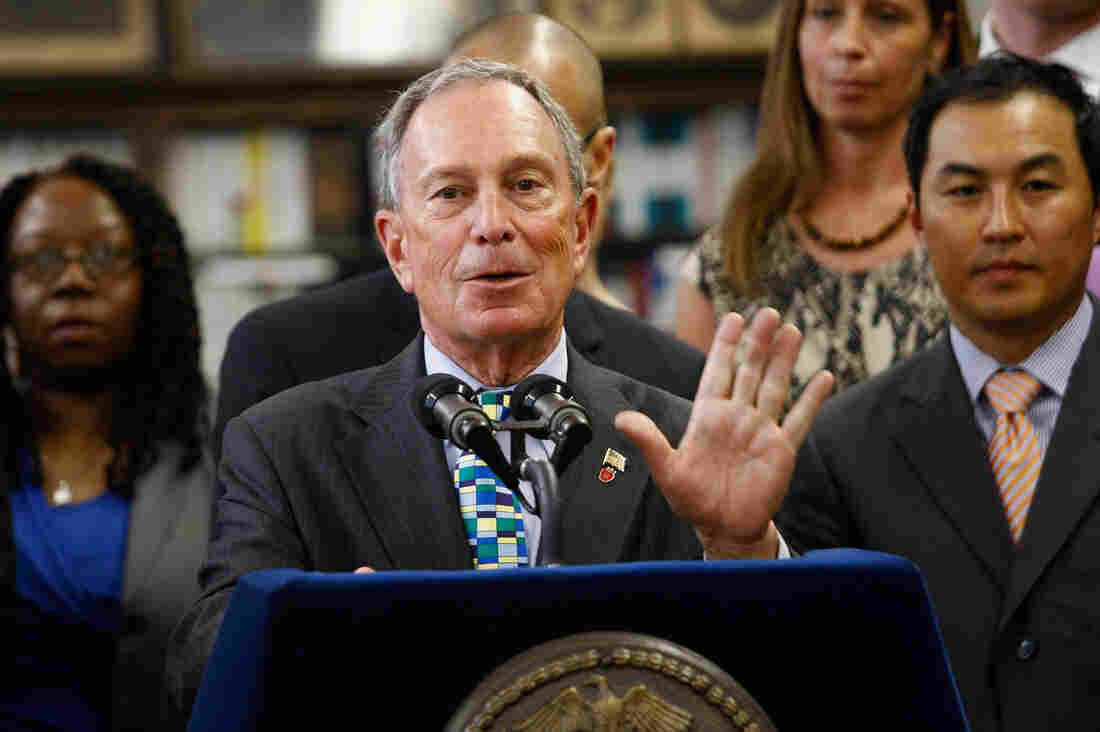 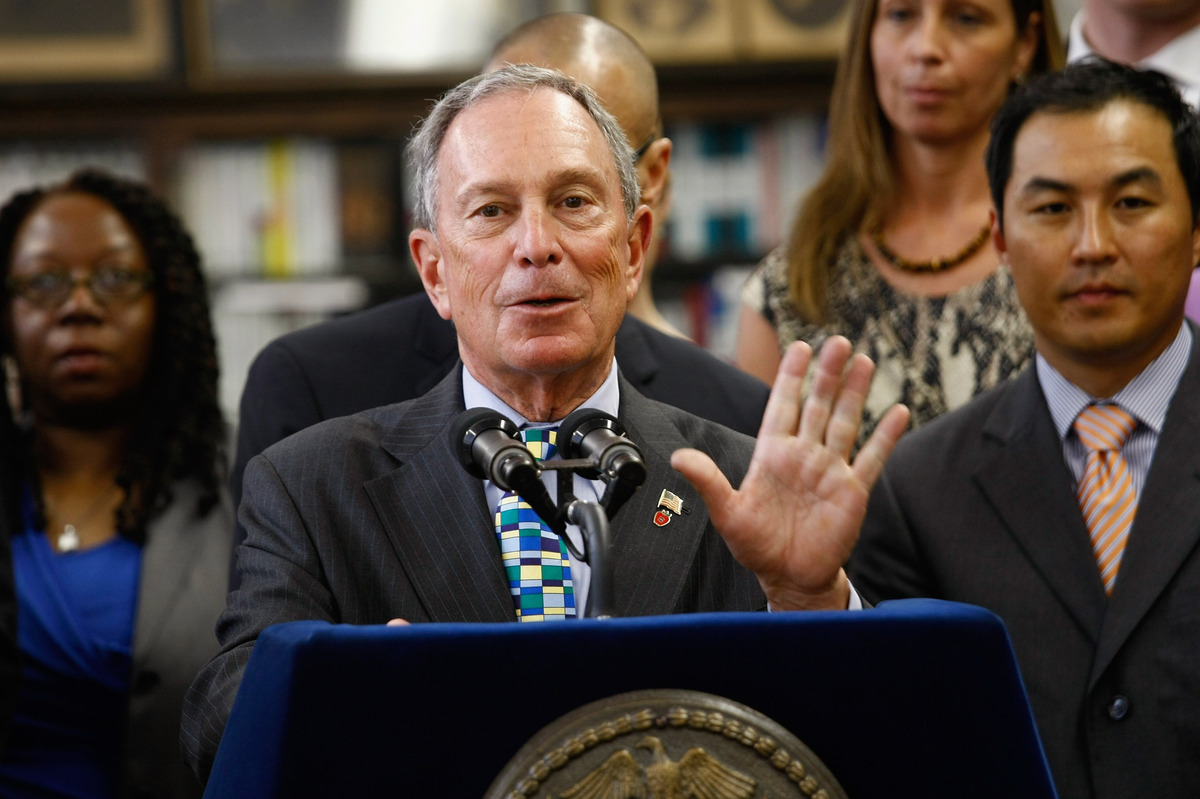 New York City Mayor Michael Bloomberg at Washington Irving High School in 2012, announcing the closures of several underperforming schools and the opening of 54 new ones. Washington Irving is set to close in 2015.

Washington Irving High used to be a large school of 4,000 students. But today, the elegant, century-old building, its walls painted with murals depicting scenes from New York history, is home to seven separate schools.

The changes at this school, near the hustle and bustle of Manhattan's Union Square, offer a window into the imprint outgoing New York City Mayor Michael Bloomberg has made on the city's public school system.

For the past decade, school reformers nationwide have put a heavy focus on student test scores and accountability. After taking office more than a decade ago, Bloomberg became a leader of that trend. Since 2002, he's closed almost 200 low-performing schools and allowed privately managed charter schools to flourish in this district of more than 1 million students.

Julian and his classmate, James Breton, were both excited when the school opened in 2012. The 242 students all have mentors at companies, including Google and Morgan Stanley.

"Not a lot of students are going to have this [kind of experience]. So to have this and have, like, a skill is going to be really good," Julian says.

"I want to learn something new, and I knew that computer science is something that would help me in the future, because it's a growing business," James adds.

Meanwhile, there's a totally different mood on the second floor, where first-graders at a Success Academy charter school are wrapping up their chess class. The charter moved into the building this year.

These two new schools, along with four others, are replacing Washington Irving High, which struggled with low graduation rates and will close in 2015. 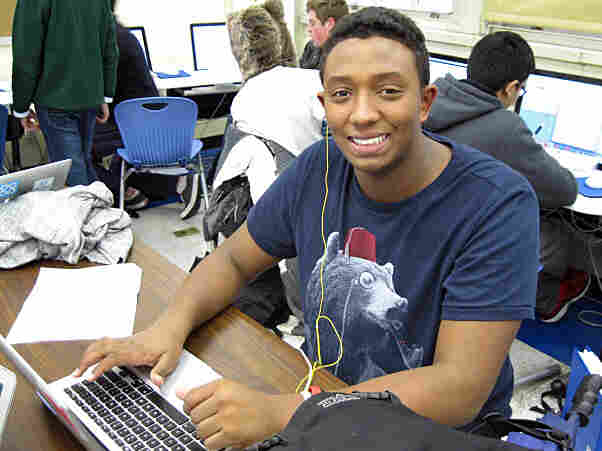 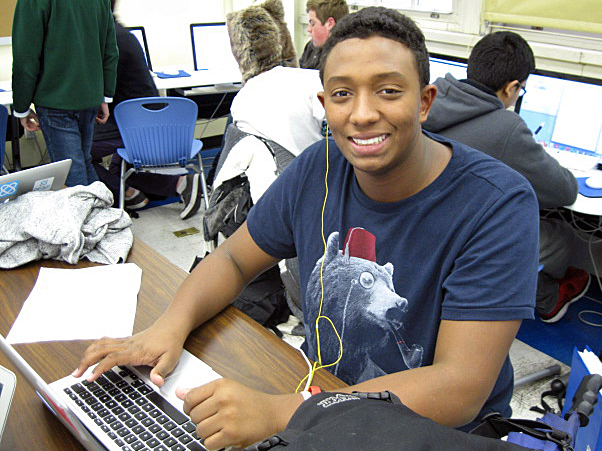 James Breton is a sophomore at the Academy for Software Engineering, one of several small schools now housed in New York's Washington Irving High School building.

Closing Some Schools, Opening Many More

The city uses test scores and other metrics to determine which schools to close, but teachers at Washington Irving say those data points don't tell the whole story.

"This mayor has trusted data, but he's never really understood that education isn't about that," says Gregg Lundahl, who has been teaching history at Washington Irving for 22 years.

Lundahl acknowledges that his school became a tough place. During his time here, the graduation rate fell to less than 50 percent. But Lundahl says that Washington Irving was doomed to fail under Bloomberg.

The city claims that it does try to help struggling schools. But replacing them with small, new schools is a signature policy of the Bloomberg era. While nearly 200 schools have been closed since 2002, there's also been a 50 percent increase in the total number of city schools in that time, to more than 1,800.

The mayor credits this shakeup with raising the city's four-year graduation rate from lower than 50 percent when he took office to 66 percent today.

"What is clear is that, for the 12 years we've been doing this, the results are, by any national standards, outstanding," Bloomberg says. "We really have become the poster child. It's really quite amazing."

But while more students are graduating, nearly 80 percent of those who attend local community colleges need remedial classes in either math or reading.

With New Leadership, Changes Ahead?

Bloomberg also put a huge focus on privately managed charter schools. The city has 183 of them, and their test scores are higher than average.

Randi Bayroff has a son in kindergarten at the Success Academy charter school inside Washington Irving. Ten years ago, she says, the high school kids used to throw furniture out the windows. One time, she recalls, "a chair came flying out of the top floor and hit someone."

To Bayroff, the new schools are an improvement. "I am thrilled and ecstatic that hopefully it will even clean up this neighborhood, this block ... we would tell our nannies not to walk down," she says.

Charters started off in low-income communities, but they have been expanding to wealthier parts of the city. Monica Thornton, who lives in downtown Manhattan, says her son tried two different regular public schools before landing at the Success Academy.

"The real question is, well, how can we expand this? The waiting list for charters is huge," she says. "The demand is there — I think that that's clear. ... It would be very difficult to argue with that."

And yet, the arguments are bound to continue. Critics note that charter schools serve fewer students who are still learning English and who have the most severe disabilities.

Now, New Yorkers have elected a new mayor, Democrat Bill de Blasio. He wants charter schools to pay rent for use of space in public school buildings. And during a candidates' forum last spring, he also said the Bloomberg administration made test scores a "false idol."

Which means a lot of changes are coming to a school system that's been dominated by one mayor for the past 12 years. But while Bloomberg put a lot of stock in accountability and more choices, the question now is how de Blasio will measure the schools.