Accessibility links
Movie Review - 'The Selfish Giant' - In Britain's Poorer Corners, A Grim Modern Fairy Tale Loosely based on a story by Oscar Wilde, the film follows two boys living in poverty in the U.K.; trying to help make ends meet, they get mixed up with a seedy scrap dealer. (Recommended) 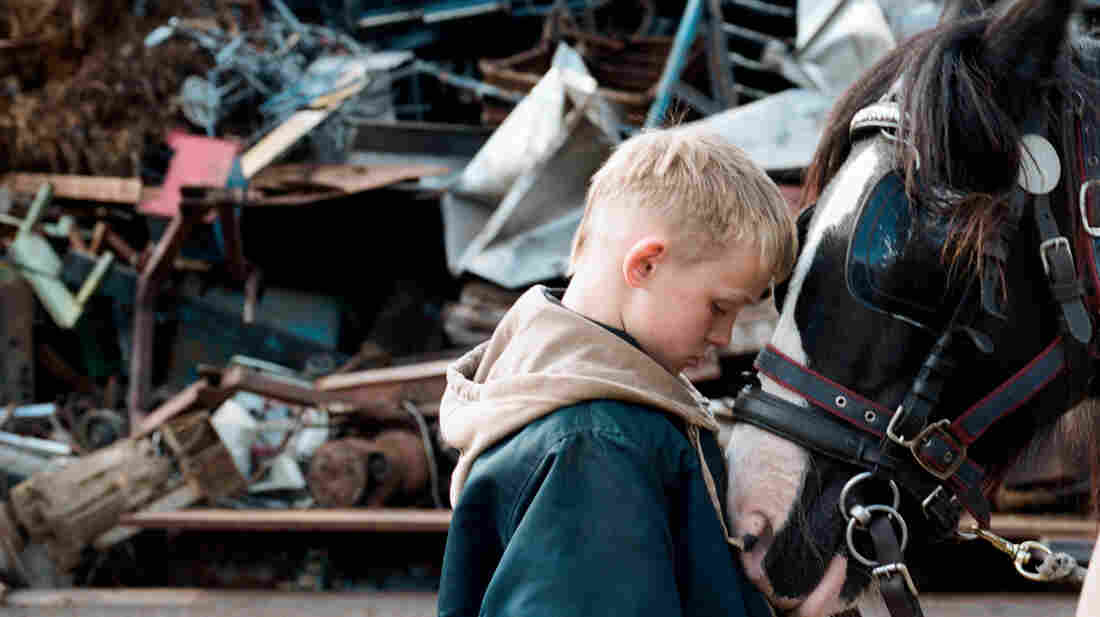 Living in poverty and expelled from school, Arbor (Conner Chapman) turns to collecting scrap metal with a cart and horse in The Selfish Giant. Agatha A. Nitecka/Sundance Selects hide caption 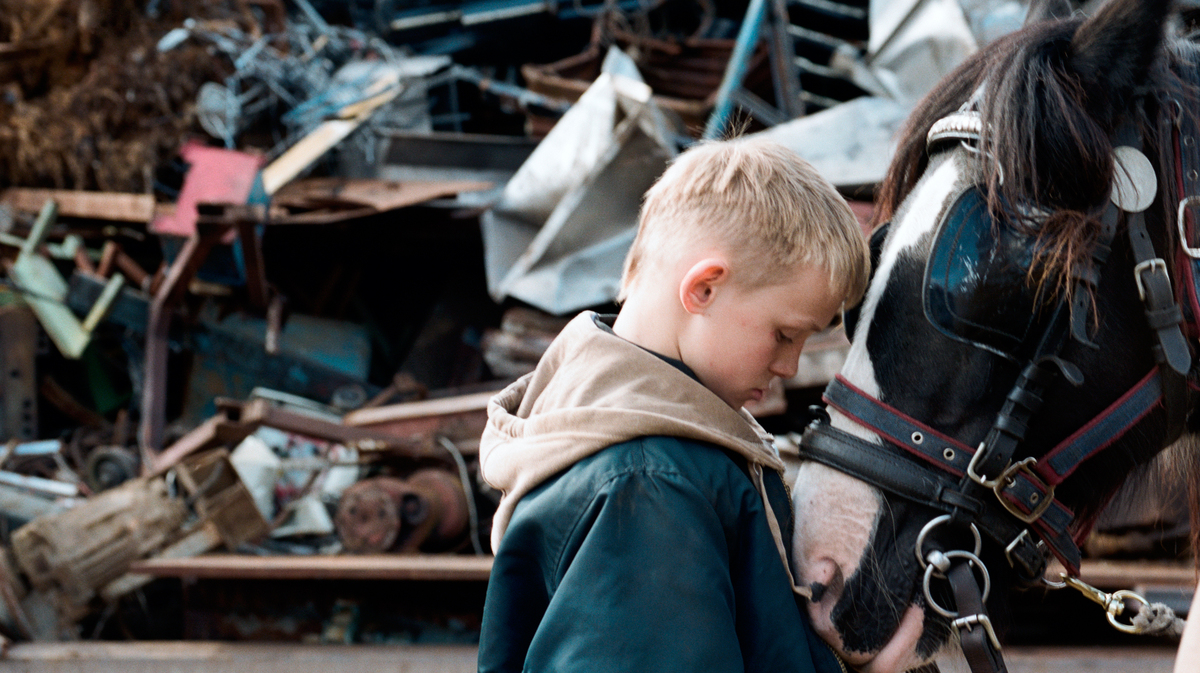 Living in poverty and expelled from school, Arbor (Conner Chapman) turns to collecting scrap metal with a cart and horse in The Selfish Giant.

In Oscar Wilde's fairy tale The Selfish Giant, the title character brings eternal winter to his garden by banishing children from it. Writer-director Clio Barnard's film of the same name was inspired by Wilde's fable, yet is much different.

The original story was for kids; the movie is about kids, but its grim depictions of violence against innocents may be too harrowing even for some adults. Yet the movie is engrossing, and sure to linger long after its poignant culmination.

Barnard, a Yorkshire native, sets the tale in Bradford, one of that British county's scruffiest cities. That's where Arbor (Conner Chapman) and Swifty (Shaun Thomas) are struggling with junior high school. The two friends, both from impoverished families, are targeted by bullies, and while Arbor is much smaller, he's more dangerous, able to channel his hyperactivity disorder into berserker rage. He often comes to the bigger boy's defense.

The youths want money, but not just for themselves. They live in homes where electricity is shut off for lack of payment, where dinner might be cold beans, where men come to repossess furniture that's already been sold to pay other bills.

Arbor, who frequently pulls Swifty into danger, starts collecting metal, which generally means stealing it. The boys sell it to a local dealer, the mis-nicknamed Kitten (Sean Gilder). He doesn't bar children from his junk-strewn garden, so long as they bring valuable scrap. They work cheaper and are easier to cheat.

The biggest prize is copper, which the scrappers call "bright wire." The poetic term is typical of British working-class lingo, which jumbles metaphor, vulgarity and slang incomprehensible to Americans. (For non-Brits, the movie has been subtitled.)

Expelled from school for fighting, Arbor turns to scrap collecting full time. He rents a cart and horse from Kitten, and persuades Swifty to join him. That's in large part because of the steed; Swifty loves Kitten's horses, both the plodders who pull carts and the runners the scrapyard owner races.

Kitten also cares for horses, although not so much that he doesn't risk them in races the RSPCA would not approve. When he sees Swifty's way with the animals, Kitten starts cultivating the boy as a potential jockey. That leads to a breach with Arbor, whose empathy is limited to humans, and just a few of them.

Yet Swifty doesn't entirely abandon his friend and protector. He continues to let Arbor lead him into perilous situations, until the event that brings the story to its not-unanticipated yet still wrenching close.

The Selfish Giant is the first fiction feature by Barnard, who previously made a lyrical documentary about playwright Andrea Dunbar, The Arbor. The drama is in the tradition of such British social-realist directors as Ken Loach and, more recently, Lynne Ramsay and Shane Meadows. They often focus on children to show the effects of deprivation on its least guarded victims.

The documentary-style visuals rely on hand-held camera, natural light and extreme closeups. The results can be unexpectedly lovely, especially when housing estates and junkyards give way to misty fields. Sheep graze not far from the dismal city, and some of the tightest shots are of horses' muzzles and eyes.

As Arbor, nonprofessional actor Chapman gives one of the fiercest performances of this kind since Martin Compston's turn as a different sort of teenage entrepreneur in Loach's 2002 film Sweet Sixteen. He's riveting, even in his final moment of calm.