Accessibility links
Movie Review - 'Her' - A Man And His Machine, Finding Out What Love Is The film Her, written and directed by Spike Jonze (Being John Malkovich), follows a lonely man who falls in love with a computer operating system. Critic David Edelstein says it's the best film of the year by far. (Recommended) 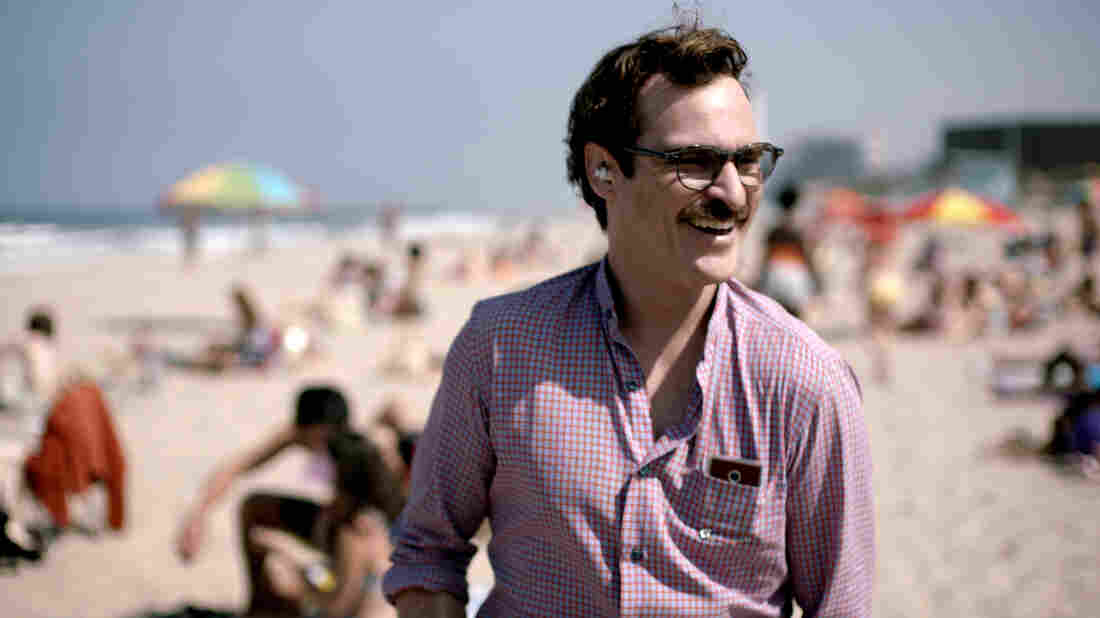 In the sci-fi romance Her, a lonely man (Joaquin Phoenix) finds love in a rather unexpected place — with a computer operating system named Samantha. Warner Bros. hide caption

Her is the best film of the year by a so-wide margin. It's gorgeous, funny, deep — and I can hear some smart aleck say, "If you love it so much, why don't you marry it?" Let me tell you, I'd like to!

I certainly identify with the protagonist, Theodore Twombly, who falls in love with his computer operating system, his OS, which calls itself — sorry, I gotta say "who calls herself" — Samantha, and who sounds like a breathy young woman.

When Her begins, it doesn't seem as if it's going to be a romance but a sci-fi social satire, set in an unspecified future Los Angeles in which the architecture has no connection to people — they stroll through faceless plazas gazing into electronic devices, talking to unseen listeners. People eagerly embrace a new kind of OS — what an ad calls "an intuitive entity that listens to you and understands you and knows you."

Phoenix wears glasses and a thick mustache, but behind his Groucho mask he's wide open. He's the kind of actor who works to get himself into a state where he loses his emotional bearings, which sometimes means he doesn't connect with other actors. But in Her, he's meant to be all by himself, responding to Samantha's voice, and the performance is like a free-form solipsistic dance. It's not pure solipsism, because Samantha exists. But you might be watching a 4-year-old talking to an imaginary friend; it's that inward.

Spike Jonze Opens His Heart For 'Her'

Scarlett Johansson does the voice of Samantha. It's not mechanical. It's seductive, throaty. At first she does what operating systems do, only charmingly: clean up his hard drive, remind him of appointments. Then she begins to wrestle with ideas, feelings. Suddenly, she and Theodore are taking soulful walks — he has an earpiece, she can see through a camera.

And Samantha continues to evolve, which you can hear — yes, hear. Samantha has spiritual needs, a drive to find new realms of communication. So Theodore feels her moving beyond his grasp — like many real lovers move on, in life.

Theodore and Samantha aren't the only show in Her. Amy Adams plays a friend of Theodore's who designs computer games and has her own relationship problems. But mostly we're in Theodore's head, and Jonze creates a lyrical, impressionistic palette. Every image is colored by emotion — and by the longing to break free of one's limited self and merge with another being.

The first time I saw Her, I was disappointed that director Spike Jonze didn't explore the Big Brother aspect, or the way whatever company created Samantha would track its users' buying habits and so forth. But that didn't interest him. He's not a satirist; he's a romantic transcendentalist.

Although sci-fi teems with cautionary tales of machines growing smarter than humans and taking over the world, on the basis of Her, I think Jonze yearns on some level for what futurist Ray Kurzweil calls "the Singularity," when machines will take on human characteristics and our minds will be expanded by machines. Jonze began with what could have been a one-joke idea, and in the course of getting it on screen, discovered the wellspring of love. (Recommended)