Accessibility links
11,420 Children Dead In Syria's Civil War, So Far The conflict in Syria presents many staggering figures. But the number of kids estimated dead, 11,420, seems to encapsulate the tragedy like no other. Most were killed by explosive weapons or Syrian army assaults. But a disturbing number were targeted or tortured. 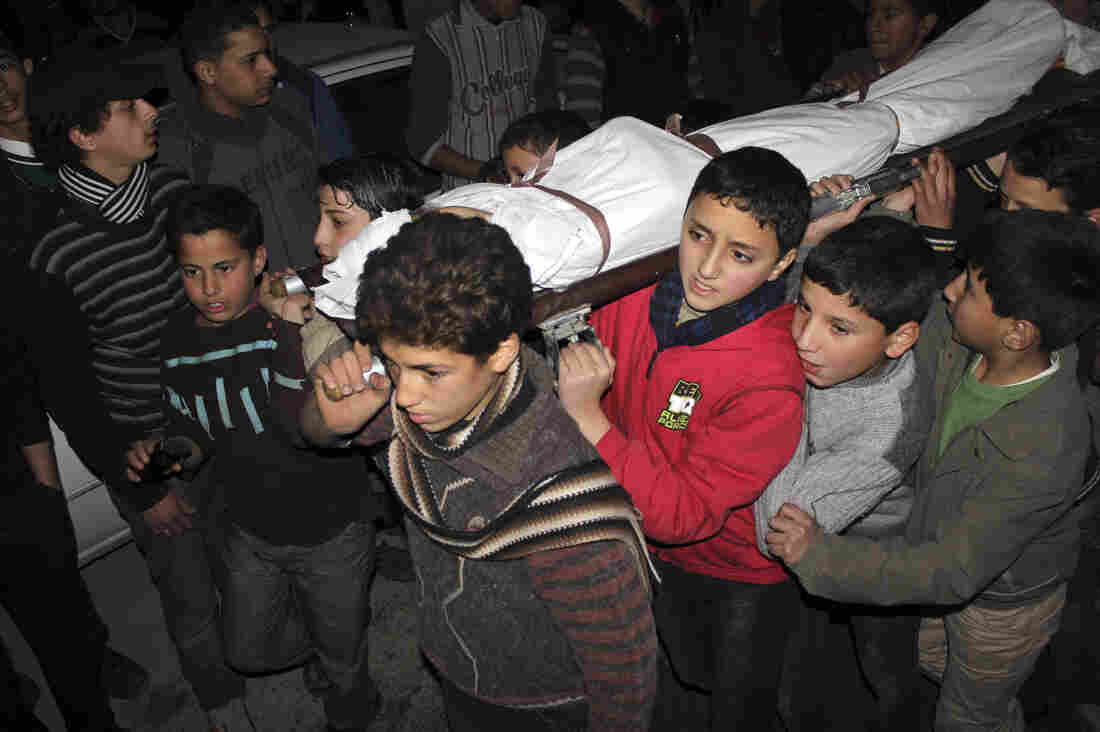 Children carry the body of a friend who was killed by shelling during heavy fighting between the Free Syrian Army and the forces of Syrian President Bashar Assad in Damascus earlier this year. Momahed Dimashkia/Reuters/Landov hide caption 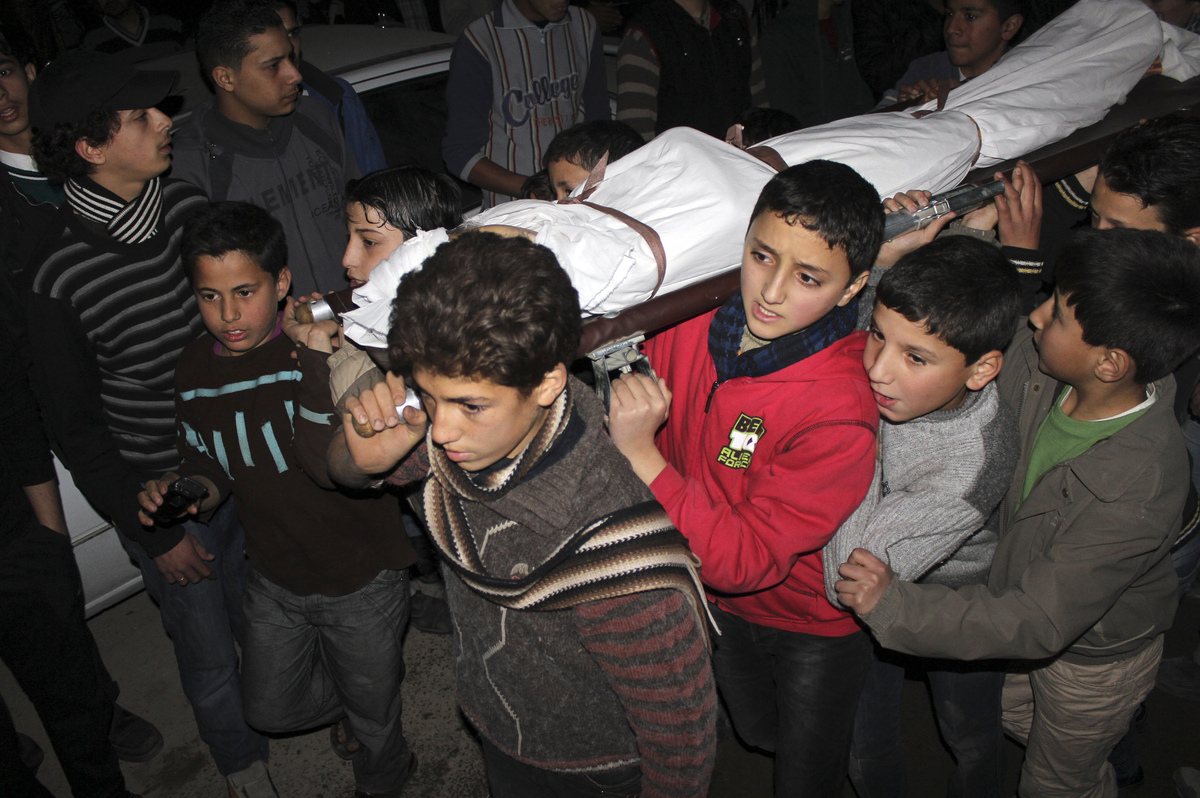 Children carry the body of a friend who was killed by shelling during heavy fighting between the Free Syrian Army and the forces of Syrian President Bashar Assad in Damascus earlier this year.

The civil war in Syria presents so many staggering figures — millions of refugees, billions of dollars in destruction — looking back to its beginning in the spring of 2011.

But there is one number that seems to encapsulate the tragedy like no other: 11,420.

That's the number of children killed in the conflict, according to the independent Oxford Research Group in London.

To understand what's happening to kids in Syria, you just have to look at the thousands of videos that have been posted online. In this one, posted at the end of November, children are being interviewed on the streets of Homs, one of the cities at the heart of Syria's rebellion.

"Six rockets fell just in front of me, me and my friend," the first boy says. He speaks directly to the camera, rocking on his bike.

A little girl says she has seen many dead bodies.

"When there is an attack, bodies are brought to my school," she explains. "My dad helps with the burials."

Like so many Syrian kids, they have seen terrible things.

"One guy lost his head, another lost his hand," says another boy, on the aftermath of a shelling he witnessed.

In the background, children are riding bikes on the street as they continue to talk.

Then, a blast interrupts; the exploding shell kicks up clouds of smoke and rocks. The children hit the ground, crawling to escape the immediate danger.

Sometime later, we see them again, assembled inside a room. They have all survived. 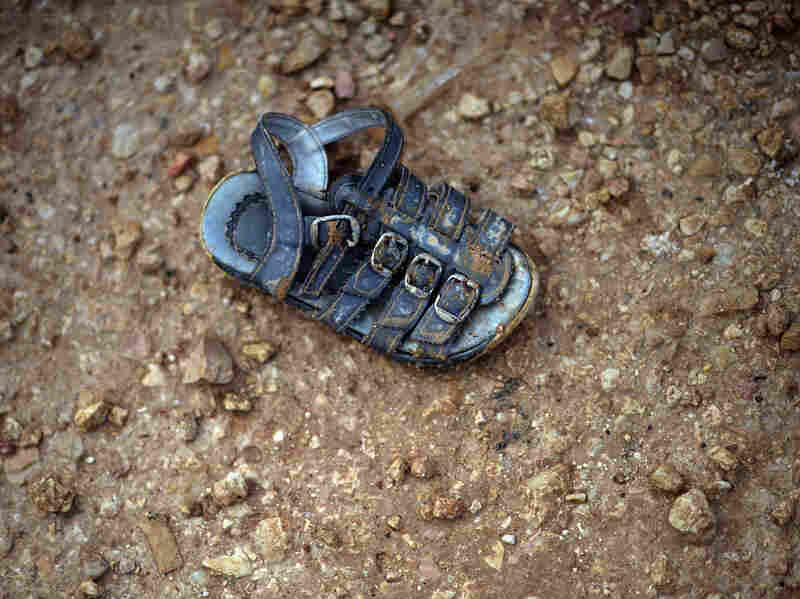 A child's shoe is left in the mud in the Zaatari refugee camp in Jordan. Even for the survivors, childhood vanishes. Jeff J. Mitchell/Getty Images hide caption 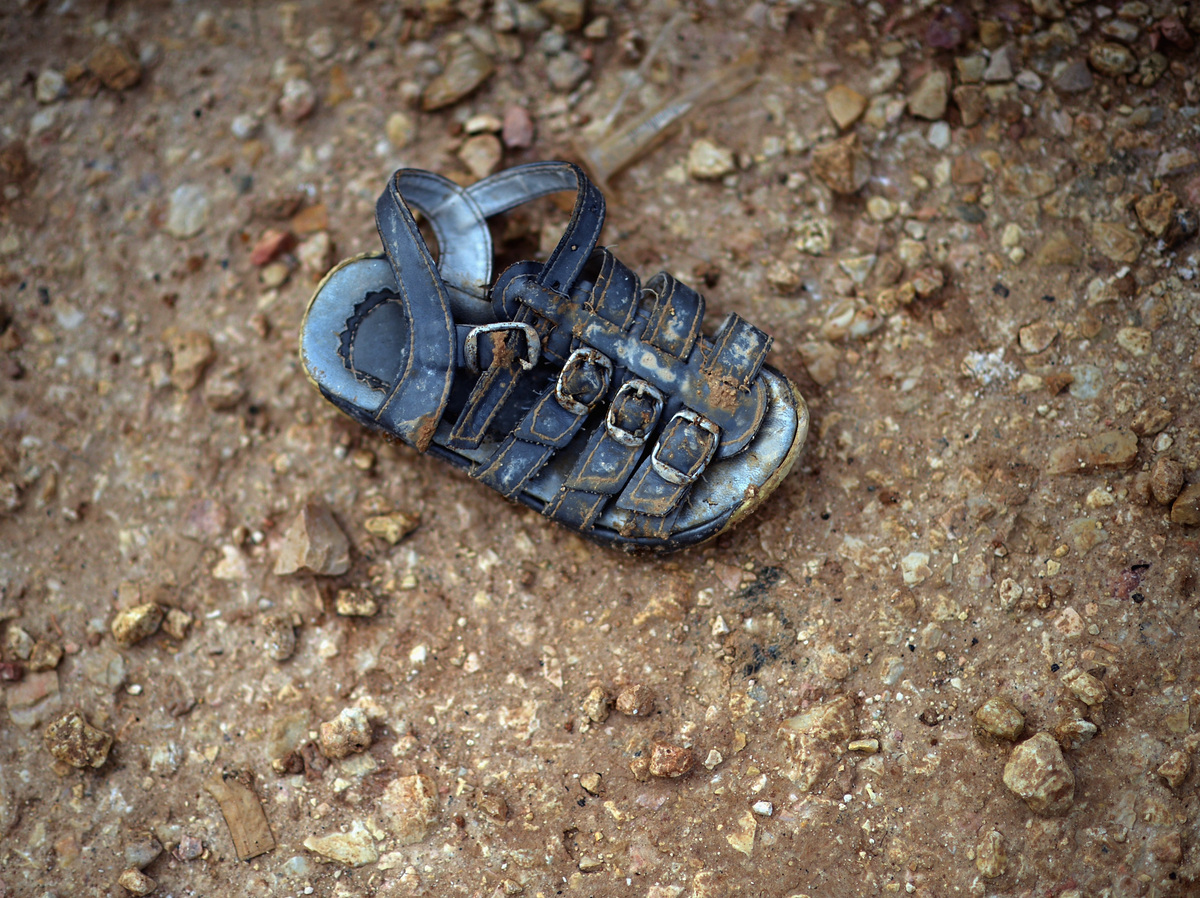 A child's shoe is left in the mud in the Zaatari refugee camp in Jordan. Even for the survivors, childhood vanishes.

The boy on the bike says with some bravado that he made it by "diving to the ground," just like he used to do at the swimming pool. But another boy looks away and says his mother cried when she saw he was alive.

The Oxford Research Group study found that this is how most children die in Syria — from explosive weapons, Syrian army assaults on their neighborhood. But others are singled out, according to the data, killed by snipers and by executions. There are 112 recorded cases of death by torture.

In every war, children are casualties, caught in the crossfire of adult conflicts, but the numbers suggest this one is different: 11,420, or about 10 percent of a total 113,735 civilian and combatant casualties. This latest report — compiled from four databases that record the death count in Syria by name, age and cause of death — makes the case that children are specifically targeted.

The only refuge is the border lands of neighboring countries. Here's another number that describes the Syrian conflict: 2 million refugees, more than half of them children. For the survivors, childhood vanishes with the hardships.

"I am from Syria; there is always shelling. I was afraid I was going to die," says a 10-year-old girl in Beirut, who is on the street alone at night selling packages of gum. She misses school, she says, but her family will be out on the street if she doesn't earn money.

Her home in Syria is in her dreams, she says.

"A beautiful house, with two floors, and music, whatever we wanted — we could eat," she says. "Now, I sell gum to feed my brothers."

For these Syrian children, there is a war on childhood; human rights researchers say it is a way to destroy a family and a community.