Accessibility links
Pastor Leads A New Brand Of Church For 'Sinners And Saints' Pastor Nadia Bolz-Weber, with her short, moussed hair and armloads of religious tattoos, is a bit of a Lutheran rock star at the moment (although the term makes her cringe). Her new book — a memoir on faith and her religious experience — recently made the New York Times best-seller list. 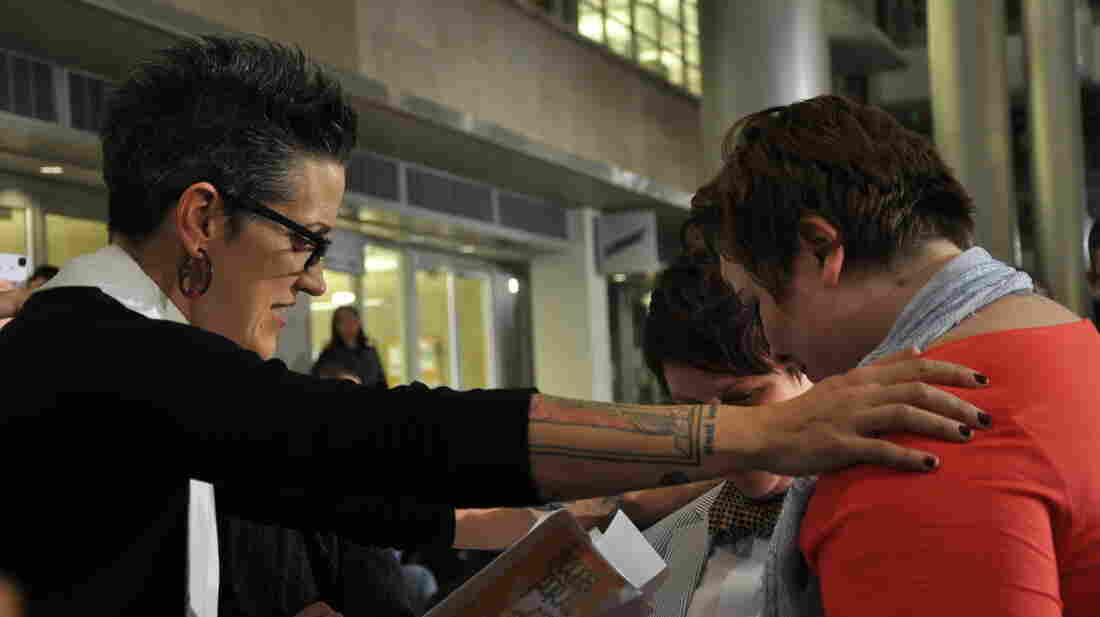 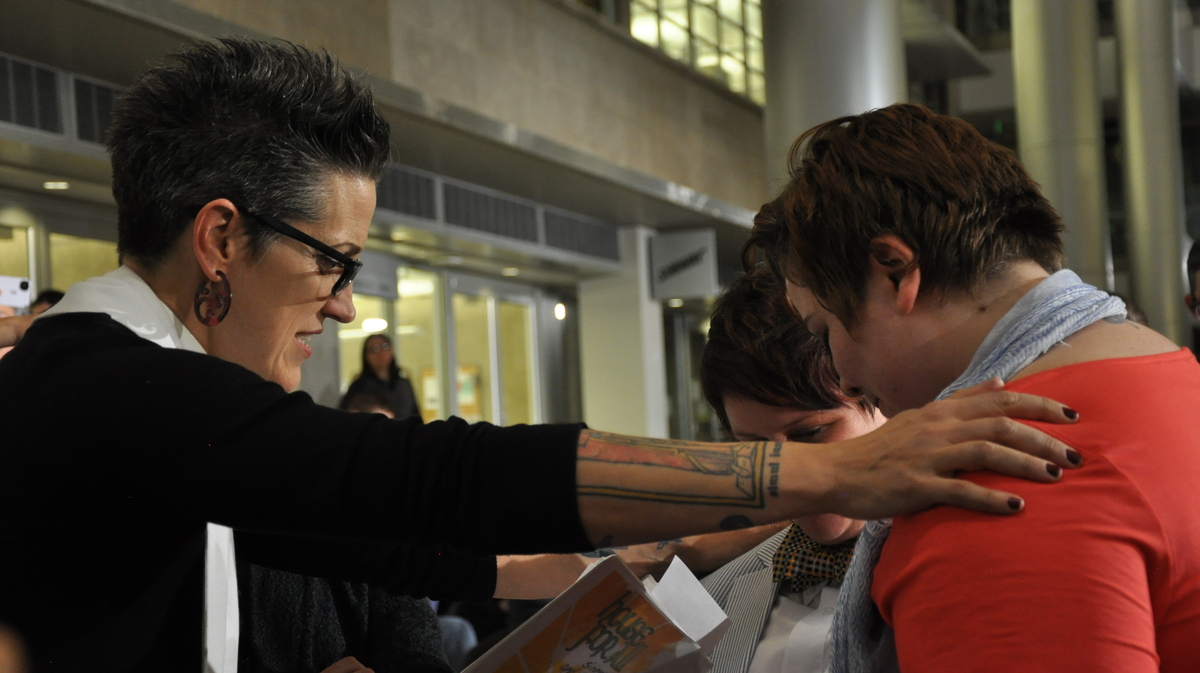 It's Sunday evening, and services are just getting underway at the House for All Sinners and Saints in Denver. Nearly 200 worshipers sit in circles of plastic chairs around a simple altar table. Together they follow traditional Christian rites. They sit. They stand. They sing.

The congregation here resembles the crowd at a downtown bookshop — hipsters and college professors, gay couples and Democratic grandmas. But even in this crowd, the congregation's pastor, with her short, moussed hair and armloads of religious tattoos, stands out as she launches into a sermon about Jesus on the cross.

"In our win-lose way of understanding things, it would have made a lot more sense for Jesus to have come and been a superhero — kicking ass and taking names, showing everyone how strong God is by winning at our game," she tells the congregation.

Pastor Nadia Bolz-Weber is a bit of a Lutheran rock star at the moment, although the term makes her cringe. Her new book, Pastrix: The Cranky, Beautiful Faith of a Sinner & Saint, recently hit the New York Times best-seller list.

What she and her church are trying to do, she says, is simple and radical: create an authentic Christian experience without the pretension that can come with church.

"I think people's tolerance for bullshit is at an all-time low," she says. 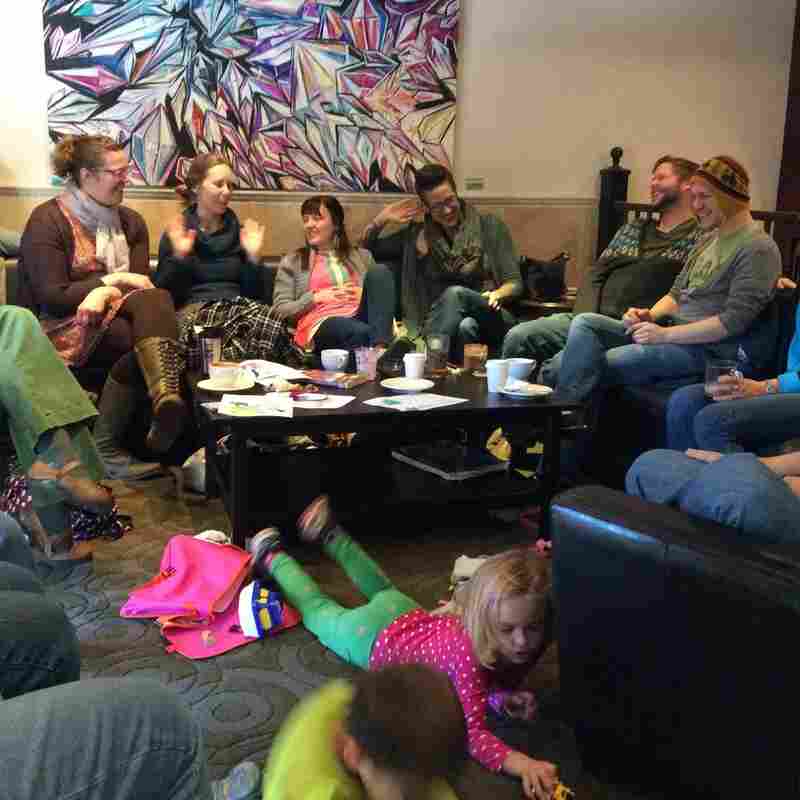 Members of the church meet at Denver coffeehouses during the week for what they call "office hours" -- informal and often highly irreverent chats. Jim Smelser/House for All Sinners and Saints hide caption

toggle caption
Jim Smelser/House for All Sinners and Saints 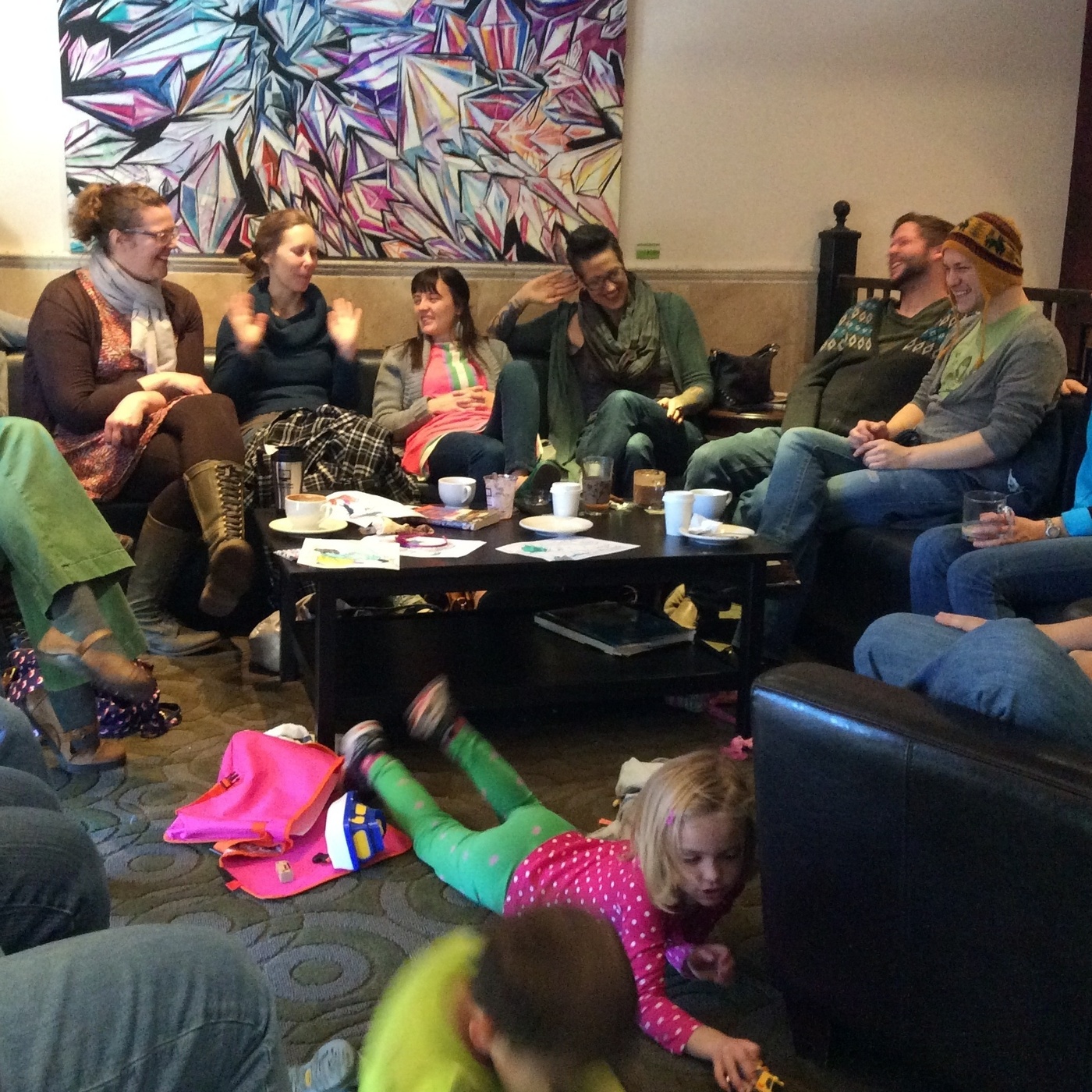 Members of the church meet at Denver coffeehouses during the week for what they call "office hours" -- informal and often highly irreverent chats.

Jim Smelser/House for All Sinners and Saints

What people want, she says, is a spiritual community that's beautiful and transformative and maybe even transgressive — and that's not what you find in most churches, conservative or liberal.

"We've been given social conventions, we've been given basically the Elks Club with Eucharist, or we've been given a place to gather on Sundays where basically what we hear is the same as the platform of the Democratic Party," she says. "I don't think the early Christians martyred themselves for either of these things."

Bolz-Weber's path to becoming an increasingly public theologian was rocky, to say the least. Early in adulthood she drifted away from her parents' conservative Church of Christ and into a lost period of drugs and alcohol, only to find God again as she was struggling to get sober. That checkered history is something she talks about openly, trying to help others feel comfortable with their own failings.

"There was a young woman, I took her confession — and it was for real, it was something really heavy — and she was super tense at the beginning, and then she relaxed," Bolz-Weber says. "Then we were kind of laughing, and she goes, 'Oh, my gosh, I'm so glad you're my pastor, because I know you've done much worse than that.' So that's also a service I offer."

The faith that the congregation practices is, for lack of a better word, orthodox Lutheran. Even the congregation's name — House for All Sinners and Saints — comes from Martin Luther's belief that everyone is simultaneously all sinner and all saint.

But "House," as it's often called, does practice its faith differently from most congregations. It offers communion to everyone, regardless of whether they've been baptized, and it opens the liturgy to all who want to participate. That really struck parishioner Stephen Ludwig when he first attended a service after a decade away from the church.

"Everyone that shows up has the opportunity to read scripture, serve communion, participate in the service," he says. "Liturgy is supposed to be 'of the people,' and this really brings it back to that."

Welcoming all is the animating idea behind House, but it can be a challenging one. As Bolz-Weber's popularity has grown, so many people have started visiting that there often aren't enough chairs for the regulars.

Longtime worshiper Stuart Sanks admits that having so many new people stopping in can be difficult.

"Sometimes it feels like House is losing that idea of what made it different. But that's just something we're trying to figure out and work through and make the best of stewarding the responsibility, I guess, that we've been given."

For Bolz-Weber, that responsibility is exciting — rethinking the way the church exists in the world today. She says she's more interested in her congregation having a dynamic, faithful relationship with God than getting hung up on the specifics of what they believe.

And while no single common belief holds the congregation together, Bolz-Weber says certain values are universal: to welcome everyone and take that message out into the world.