Accessibility links
U.N. Ambassador Laments Misery In Central African Republic Samantha Power, the U.S. ambassador to the United Nations, was sent to try to stem the growing violence that has gripped the country since Muslim rebels toppled the government in March. Christians and Muslims, who once peacefully co-existed there, are now living in a nation on the brink of genocide. 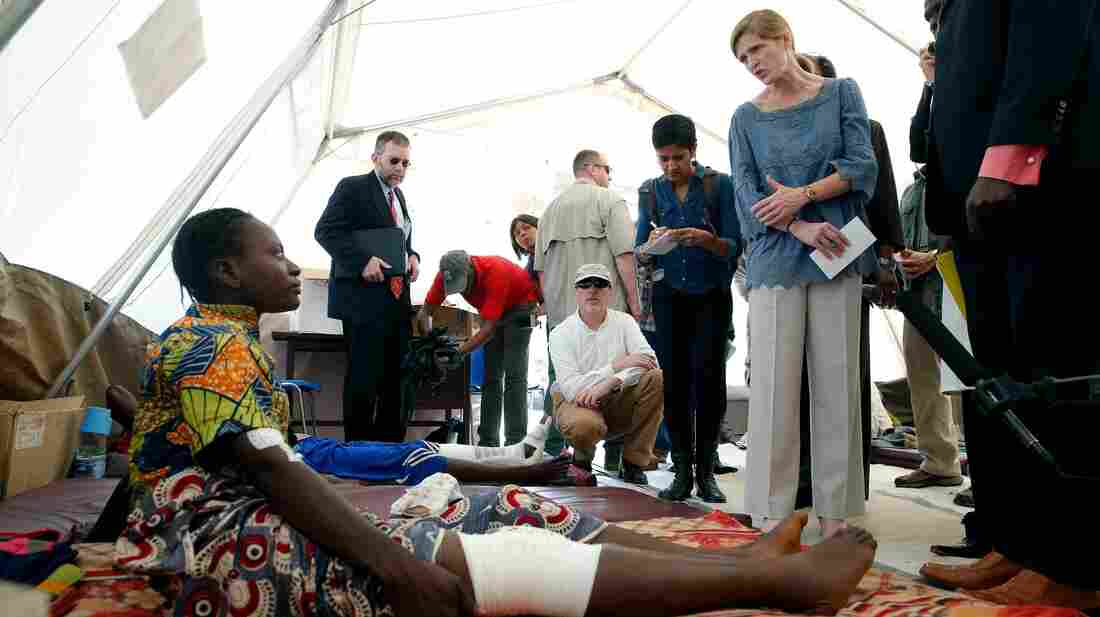 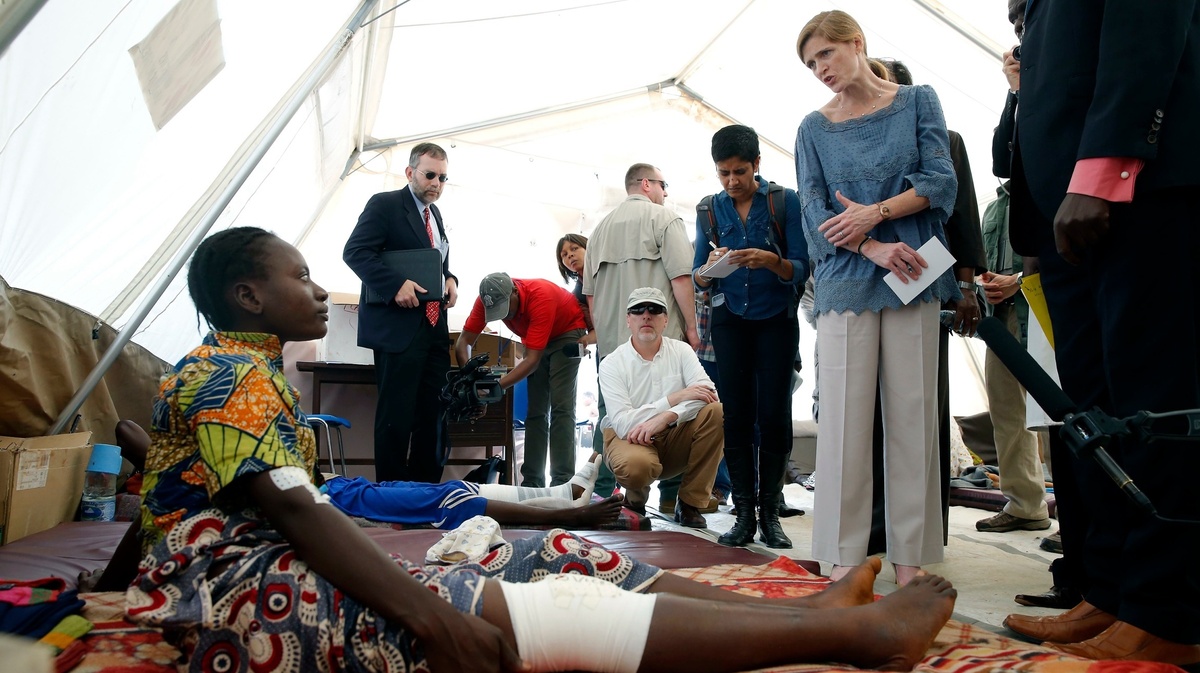 U.S. Ambassador to the Unitied Nations Samantha Power (right) listens to Lucy Mandazuto at a community hospital in Bangui, Central African Republic, on Thursday. Mandazuto was wounded in sectarian violence.

You don't have to venture far to see the misery caused by the latest crisis in the Central African Republic.

On the edge of the airport in the capital Bangui, tens of thousands of people are sleeping out in the open with no basic services. It's here that Samantha Power, the U.S. ambassador to the United Nations, meets Martine Kutungai with her husband, a pastor, and their eight children.

Kutungai says she's terrified to go home because of the Seleka — Muslim rebels who toppled the government in March.

"We saw them moving door after door, killing people with knives and shooting at some of them," says Kutungai.

She tells Power that the only way she'll feel safe to return home is if the militias are disarmed.

While Power and the U.S. delegation leave to meet the country's leaders, journalists speak with Lindis Hurum, who runs a Doctors Without Borders clinic.

Dozens of people are lining up to have their machete and gunshot wounds dressed, or to get basic health care.

"We see a lot of malaria, skin diseases, infections linked to the bad hygiene in the camp," says Hurum. "We see an increase in malnutrition. And we have a lot of pregnant women — we have on average eight births every day."

Power, the highest-ranking U.S. official ever to visit the country, announced another $15 million in humanitarian aid. But her main focus on Thursday's trip was to try to tamp down the violence in a country where Muslims and Christians once co-existed, but which has been in chaos since a coup in March.

Now, Muslim fighters and Christian militias both are carrying out atrocities.

"We met with one woman whose husband had been stabbed to death in front of her, his body doused in gasoline and then set fire in front of her very eyes," Power says.

She is urging religious leaders to help promote reconciliation, and says the government must hold all militias to account.

"There is a tyranny of the mob that has taken hold here, and that is both horrific in its own right but also something that can be hard to stop once it's unleashed," Power says.

A former journalist and activist, Power wrote a Pulitzer Prize-winning book about genocide prevention, and she has clearly played a lead role in getting the Obama administration to focus on this remote country in Africa, where the U.S. is offering $100 million to support French-led African Union peacekeepers.