Accessibility links
Interview: Ben Stiller, Spinning Daydreams In 'Walter Mitty' Known for his broad comedies, the actor takes a more serious turn in The Secret Life of Walter Mitty, playing a man who copes with his boring life by creating a wild fantasy existence. He spoke with NPR's Melissa Block about the film, which he also directed. 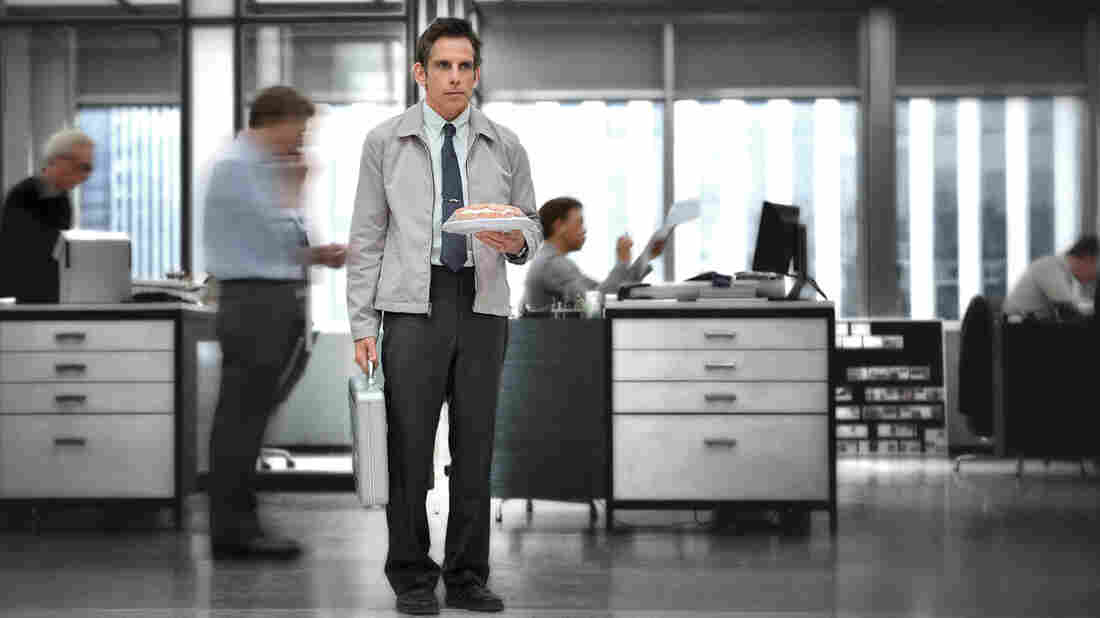 Ben Stiller stars as a man who escapes his humdrum life by daydreaming in The Secret Life of Walter Mitty, which he also directed. Wilson Webb/Twentieth Century Fox hide caption 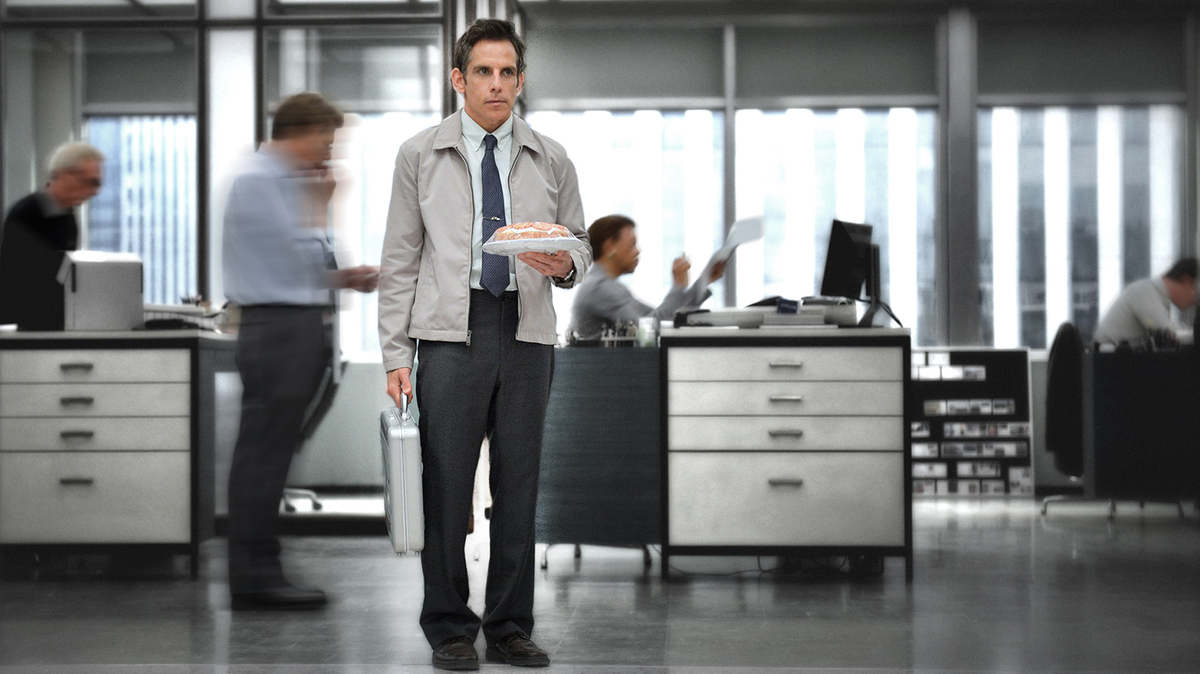 Ben Stiller stars as a man who escapes his humdrum life by daydreaming in The Secret Life of Walter Mitty, which he also directed.

The Secret Life of Walter Mitty — originally a two-page James Thurber story published in The New Yorker in 1939 — is about the reveries of a henpecked husband who became transformed, in his imagination, into an intrepid fighter pilot or a world-famous surgeon.

Made into a Danny Kaye musical in the '40s, it's taken on a modern spin now, in a new film from actor-director Ben Stiller, who plays Walter as a guy whose life is so flat he can't even come up with a profile for a dating site. But in his daydreams, he takes flight: He becomes a grizzled Arctic explorer, a fearless superhero.

Stiller tells NPR's Melissa Block his vision for Walter Mitty began with Thurber's short story. Then, the screenplay expanded his understanding of why Walter does what he does.

"[He's] a guy who's sort of suppressed a lot of his ambition and ... who he wanted to be when he was younger," he explains. "And [he] sort of got diverted by life, and now he's sort of settled in to being kind of a normal guy, a regular guy, and is not even as aware ... what he's pushing down in the daydreams."

On relating to Walter

I definitely related to the moments in life where you try to be your best possible self, but you can't quite pull it off. Or you just aren't, in the moment, who you want to be. Or you think of that thing to say to somebody, the comeback for somebody, when you think of it 10 minutes later and they're gone.

On Walter's magazine job and the transition to a digital world

[There's] craftsman-like work that the people do, that is going away as we do transition to a fully digital world. [We're] losing the art of putting together a magazine or working with film.

Me personally, I love film. I grew up making Super 8 movies when I was 10 years old, cutting them together, sending the film out, getting it developed and waiting three days. And when that goes away because it's not necessary anymore, it does seem to me that there's the danger of people not being appreciated, and the work they have done not being appreciated, just because it isn't profitable anymore.

On the difference between editing actual film and doing it digitally

It's just changed, I think, the style of editing in movies. Because there's just much quicker cutting. That wasn't necessarily impossible to do before digital editing, it just was a lot harder to do.

But in the process of editing a movie on film, you mark up the film with a grease pencil [on] the actual frame where you're deciding to cut. So basically I think a lot more thought went into the actual cuts before the cuts were made. Because it would take five or six minutes to cut from a close-up to a wide shot to another close-up. You know, maybe the result is that a movie is finished earlier than it would have in the old days, when you would've taken a little more time with it before you actually put it out there. Because you couldn't do it so quickly.

In the last 20 or 30 years, I just know my own attention span has changed. And when you show your kids a movie from the '70s or even the '80s, I mean, a lot of movies are just a lot slower.

On tacking away from his comedy work

Well, I don't look at it as a different direction. I just think it's sort of, for me, at that point when I was doing a lot of those broader comedies or whatever, that was what I was interested in and excited by. And I'm not less interested in it. I don't have any issue with doing those. It's just you have to go with what you feel connected to and passionate about. It's just where you're at in the moment. And if there was a great comedy that really made me laugh, or a great director to work with, [if] it felt like the right thing, I would do it. But I'm also interested in doing lots of different kinds of things.

On comedy as a family business

I do think it's a part of our personalities. When I was a kid I wanted to be more serious ... just when I was probably like a teenager. But that was because I hadn't figured out my own sort of sensibility, I think, comedically. Or it hadn't hit me really yet.

Because growing up with your parents, they're you're parents. And no matter what — and my parents [Jerry Stiller and Anne Meara] were amazing and very supportive, and they're very, very, really talented funny people. So it was, I think, in a lot of ways, daunting at first. And I think I wanted to — I knew that directing was what I really loved the most, and so I wasn't trying to follow in their footsteps as much.

And then as I got a little older and started to connect to my own comedic touchstones and things that made me laugh and that were my own thing — I think because I just had to find myself in that way — and then I sort of opened up to it more. And then, eventually, [I] was able to let go of any of that feeling of needing to differentiate myself from my parents, and just be able to appreciate what we have in common. Which we definitely do, and I see it in my kids too. But when you're a kid it's just different, you know? 'Cause it's your parents.

On his parents' different styles

They're very different in terms of their senses of humor. My dad always wanted to be a stand-up comedian. He grew up during the Depression, and he saw people like Eddie Cantor, and he wanted to do a stand-up act.

My mom's sense of humor is a lot more cynical and Irish Catholic — dark. She grew up with a lot of death and drama in her family, and they figured out a way to cope with that, with humor. You know? And her sense of humor to me is just incredible.

My dad is just naturally funny as a person. I feel like he just can't help but be funny, because he's so committed to who he is. And I think in some way for me, my mom's sense of humor feels more — I feel more connected to that probably. We laugh at the same things more. But my dad makes me laugh as much as he makes everybody else in the world laugh.