Accessibility links
The Crossword Turns 100 (Across): Celebrate By Playing Our Puzzle What's the best way to celebrate the 100th anniversary of the crossword? By solving one, of course. Download a special puzzle that Ask Me Another created for the occasion. Only one question remains: will you use pencil, or pen?

Hear Will Shortz Prove His Anagram Prowess On Ask Me Another

Listen
The Crossword Turns 100 (Across): Celebrate By Playing Our Puzzle

The Crossword Turns 100 (Across): Celebrate By Playing Our Puzzle 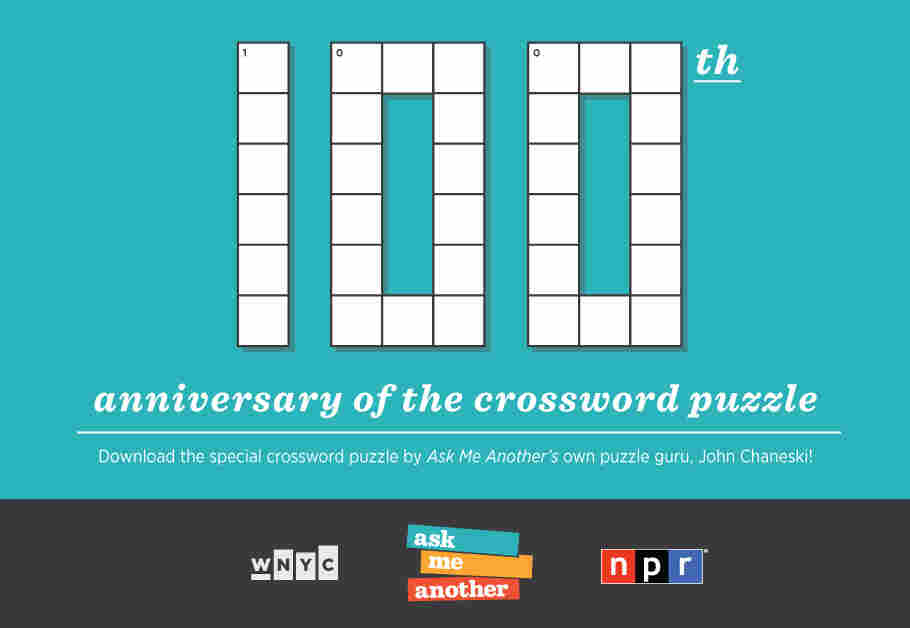 The first published crossword puzzle was printed on December 21, 1913, in the The New York World. It was written by Arthur Wynne, a British journalist who moved to the United States at age 19 and wound up in New York City. His puzzle, diamond-shaped and identified as a "Word-Cross," first appeared in the "Fun" section of the Sunday paper.

The weekend tradition has endured. Crossword enthusiasts are well familiar with The New York Times' super-sized Sunday puzzle, and its editor (and frequent Ask Me Another guest) Will Shortz, has become a wordplay superstar.

To mark the puzzle's 100th anniversary, Ask Me Another puzzle guru John Chaneski crafted this special AMA-themed puzzle. While you don't have to be a superfan of the show to solve it, astute listeners of the show's credits will sense a theme.

Only one question remains: will you be using pencil, or pen?

We'll post the answer key in a few days, but we want the competitive solvers among you to show off your smarts. If you're so inclined, leave your solving time in the comments, or send Ask Me Another a photo of your finished grid at askmeanother@npr.org or by tagging #askmeanother on Instagram. Plus, we'll be tweeting out hints all day on Saturday, December 21st. Puzzle on!

Stumped on the puzzle? Click here for the answer key.

Wordplay On The Brain

Hear Will Shortz Prove His Anagram Prowess On Ask Me Another