Accessibility links
For BP Cleanup, 2013 Meant 4.6 Million Pounds Of Oily Gunk Crews collected 4.6 million pounds of oily material from the Gulf Coast shoreline this year. Coastal residents are asking how long they'll be living with the effects of BP's 2010 oil spill in the Gulf of Mexico. 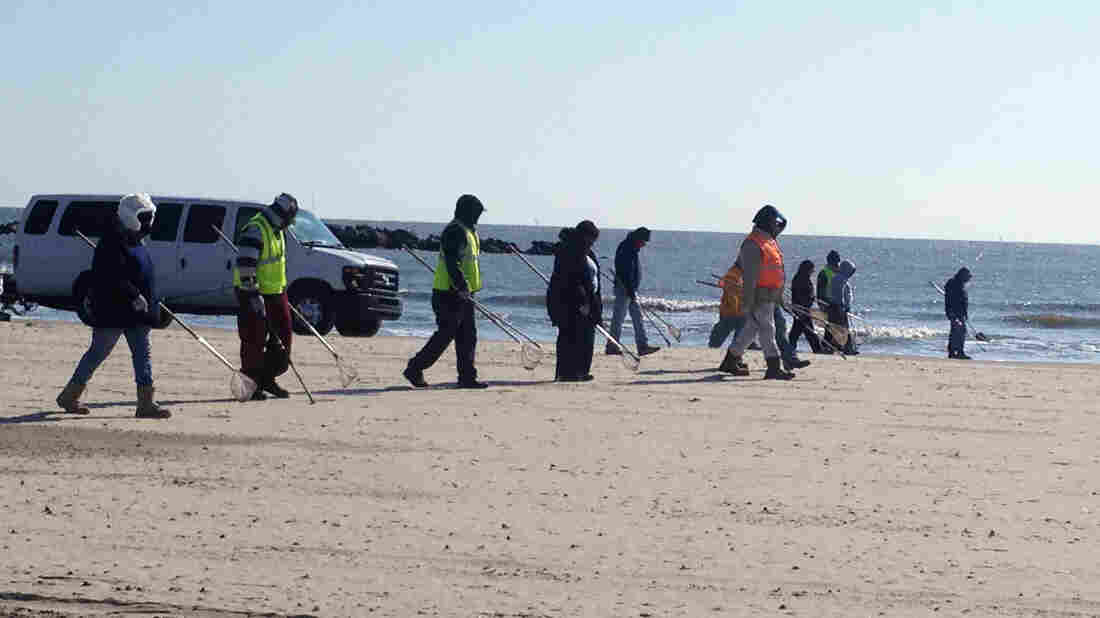 A cleanup crew combs the sand for tar balls on Grand Isle, La. The 2010 Gulf Coast oil spill may seem like a distant memory, but the recovery is still underway. Debbie Elliott/NPR hide caption 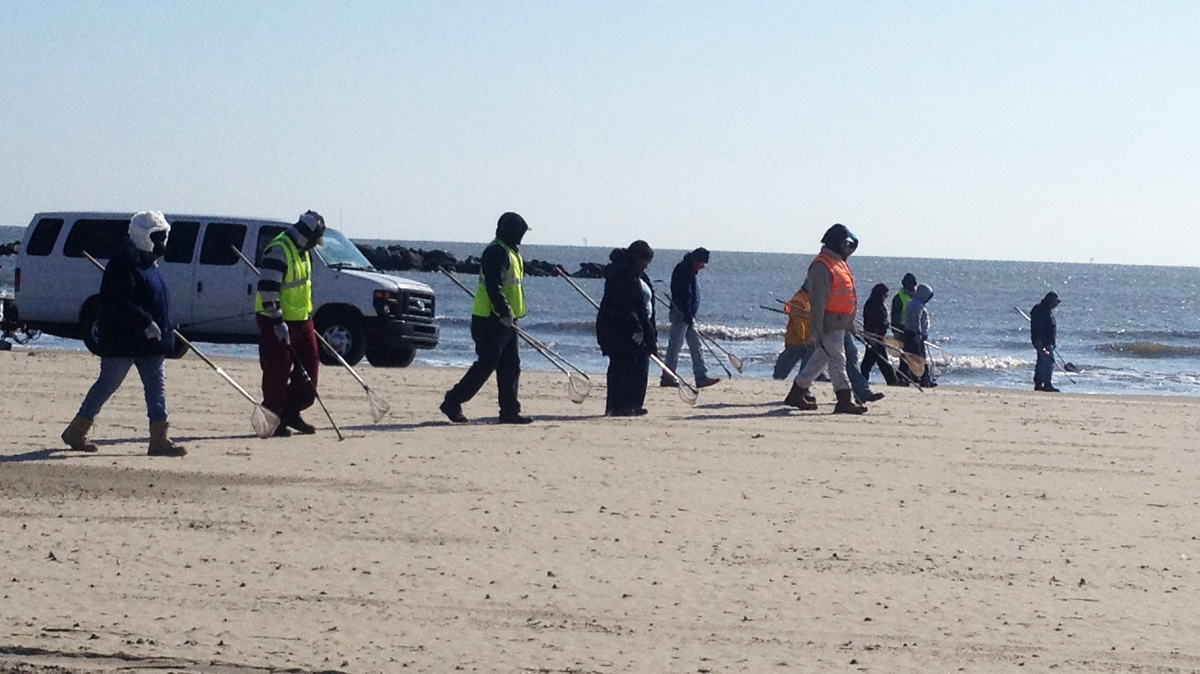 A cleanup crew combs the sand for tar balls on Grand Isle, La. The 2010 Gulf Coast oil spill may seem like a distant memory, but the recovery is still underway.

As we near the end of 2013, NPR is taking a look at the numbers that tell the story of this year. They're numbers that, if you really understand them, give insight into the world we live in.

On a breezy December morning, a work crew is scouring the surf line on Grand Isle, La., scooping up tiny tar balls and collecting them in a basket.

Foreman LeRoy Irving keeps track of what the 14-person team has collected in a half-day. "If I had to guess, maybe 10 pounds," he says.

These patrol and maintenance teams are out four days a week, combing Grand Isle and nearby beaches on this stretch of south Louisiana. It continues to be a trouble spot for oiling, nearly four years after the BP oil spill.

47,000 — total personnel working on cleanup at the peak of the response

This year, crews have collected 4.6 million pounds of oily material from the Gulf Coast shoreline. Coastal residents are asking how long they'll be living with the effects of BP's 2010 oil spill in the Gulf of Mexico.

"A lot of people don't realize that the Deepwater Horizon response is still going on," says Coast Guard Petty Officer 1st Class Michael Anderson with the Gulf Coast Incident Management Team. "It's been a marathon, not a sprint."

Oil In The Breaches

The active cleanup is now down to 55 miles here in south Louisiana — out of more than 4,300 in the immediate aftermath of the spill. Tar balls still wash ashore on beaches in Alabama and Mississippi, but now only get cleaned up when a report is called in to the National Response Center.

Anderson says the active cleanup is now focused on harder-to-find oil. Tropical storms have buried it under layers of sand and sediment, both on beaches and in marshes.

"The breach is actually an area that's been worn away by the water so you have an open channel or trench between the ocean and the marshes behind," Anderson says.

More than 1.5 million pounds of oily material have been recovered in the breaches. Anderson says the material is made up of about 90 percent sand, shell and water, and 10 percent oil.

BP officials declined to be interviewed for this story, but in a statement the company says it's confident that contractors have "located substantially all the material that is feasible to recover in Louisiana." To date, BP has spent more than $14 billion on response and cleanup activities.

'They Killed The Fish And They Put Oil On The Beach'

But environmentalists say the fact that 4.6 million pounds was collected this year — more than three years after the disaster — is telling.

"You put that much oil into an ecosystem, and you're going to be living with the consequences of it for a long, long time," says David Muth with the National Wildlife Federation in New Orleans. 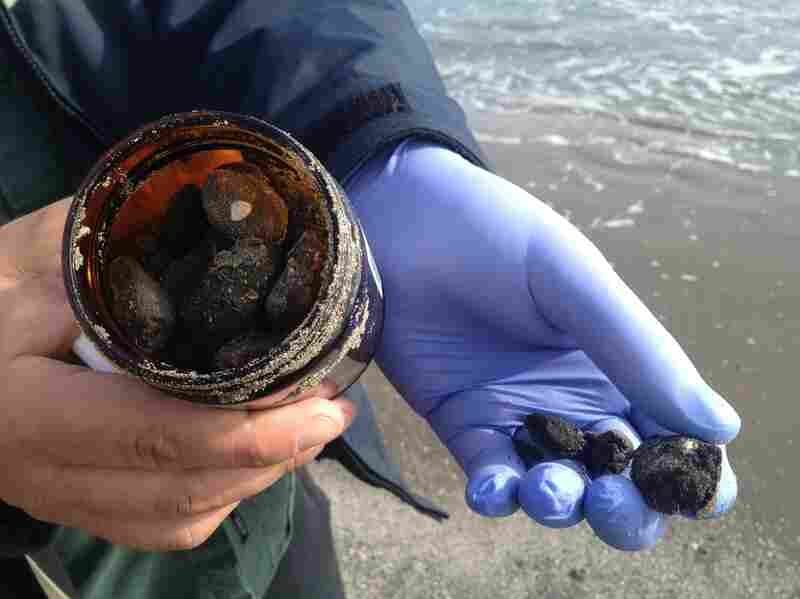 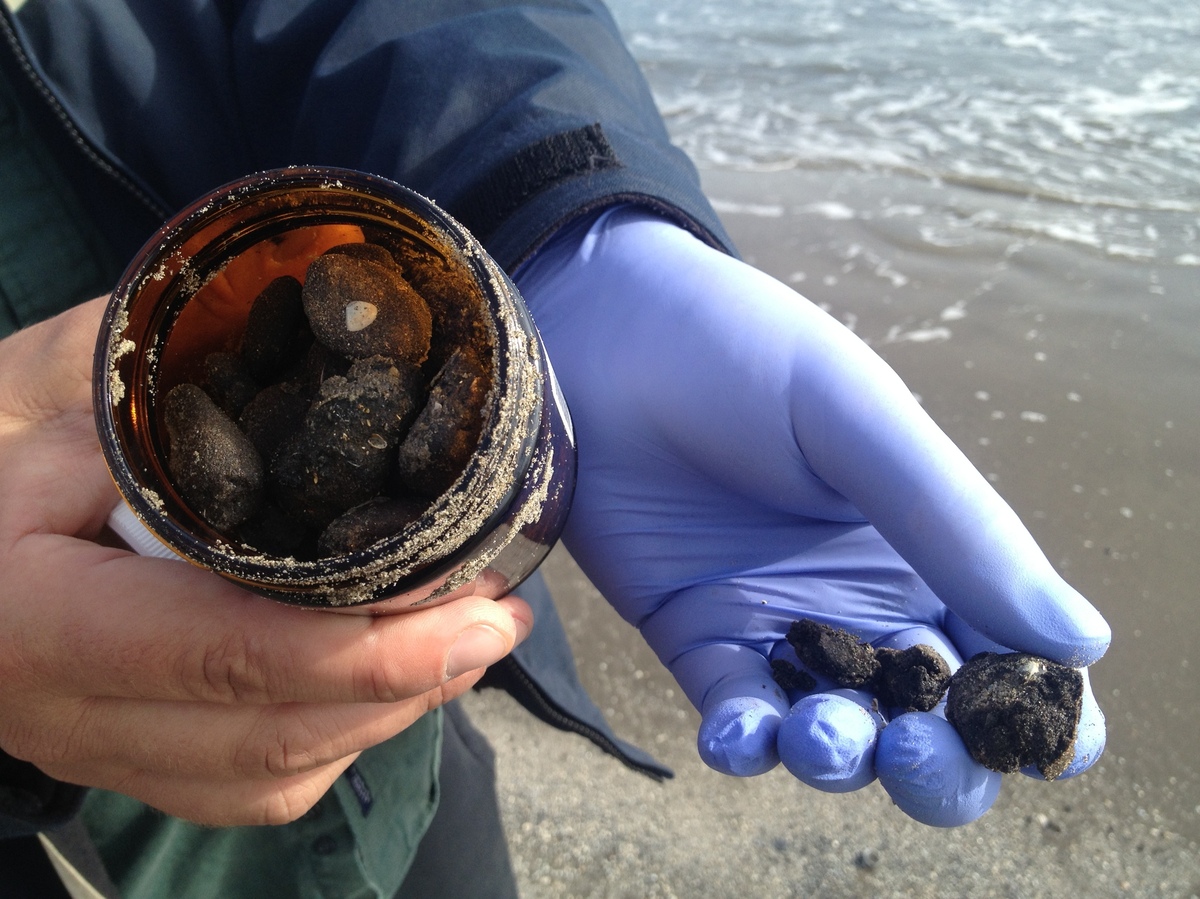 Jonathan Henderson of the Gulf Restoration Network holds a jar of tar balls.

On Elmer's Island, a state-owned spit of land on the Gulf, Muth spots a host of shorebirds: pelicans, cormorants, terns, even the endangered piping plover.

"We're watching birds all along this beach throughout the marches, throughout the bays, in the open gulf, that are actively feeding, and the question is how much of that residual oil, oil byproduct, are they picking up?" Muth asks.

Jonathan Henderson of the Gulf Restoration Network documents the ongoing impacts of the BP oil spill. On Elmer's Island, he's armed with a specimen jar and blue latex gloves — and picking through tar balls in the tide line.

"You crack them open and you can see they're kind of brownish and sandy on the outside, but open, they're black in the middle. You can smell it right away once you crack it open, the fumes start coming out of them," Henderson says.

Henderson also does regular flyovers of the Gulf's oil production platforms, looking for evidence of leaks that might not make the headlines that BP did.

"Any time could turn into something bigger. Clearly one of the dangers of deepwater drilling like this is once you have a blowout the damage is really going to be done and it's going to stick with you for a long time," he says.

That's been a hard lesson for Dean Blanchard, a shrimp processor on Grand Isle.

"Basically, they turned us into a ghost town," Blanchard says. "The thing to do down here was to fish and to lay on the beach. They killed the fish and they put oil on the beach."

There's no reason for people to come now, he says, unless they work on an oil cleanup crew.