Accessibility links
A Vet Finds PTSD Relief With Pot, Though The Law Creates Hurdles Ryan Begin, an injured veteran, says marijuana helped his pain and PTSD in ways that prescription drugs did not. Those drugs "drained his soul," he says. But pot brought on new complications for the Iraq vet because while six states allow the use of marijuana for PTSD, the federal government does not. 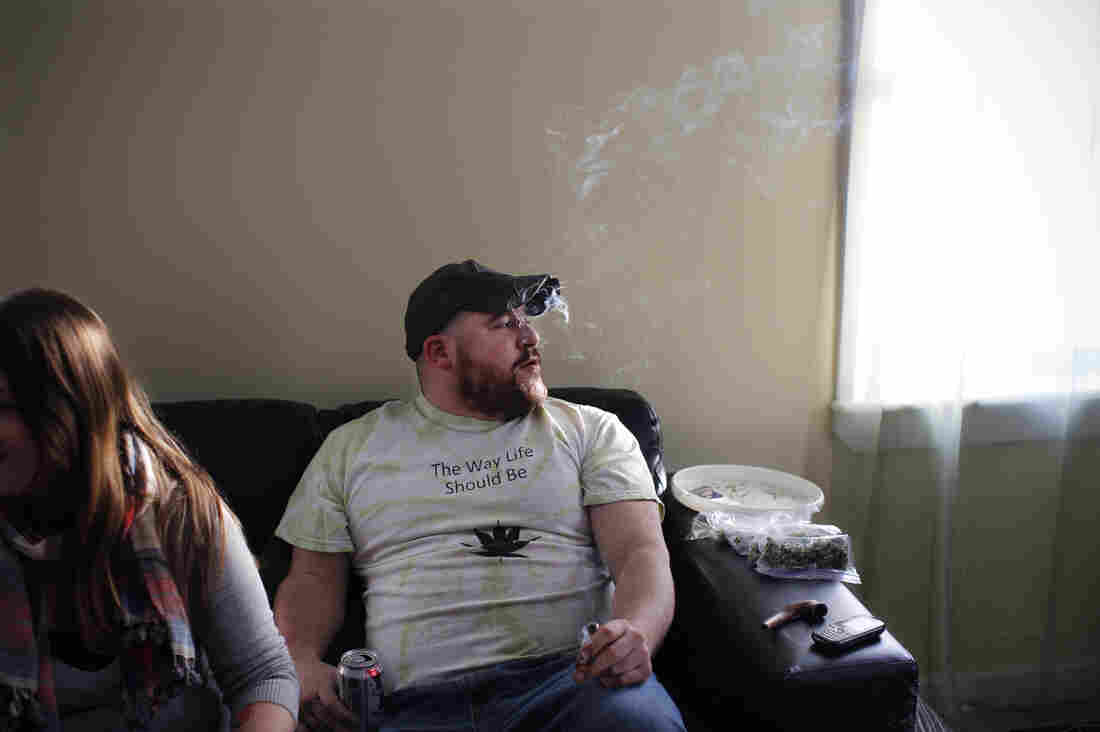 Ryan Begin treats his PTSD by smoking a joint in his home in Belfast, Maine. Scott Alexander Ruderman for NPR hide caption

Ryan Begin hasn't always been the life-loving pot smoker he is today. Back in 2005, the sergeant nearly lost half his arm to an IED while serving in Iraq and was sent home for reconstructive surgery. Upon his return to Belfast, Maine, Begin was plagued by physical pain and outbursts of aggression. He was prescribed a cocktail of drugs as his treatment.

"They took the soul out of me. All that stuff, it drained my soul, it blackened my soul," Begin says.

"He withdrew from everybody. I had seen him over the years attempt suicide, and I worried every day that I'd get the call that he succeeded," his mother says.

Begin reached a critical low on July 21, 2009. He crashed his truck while drunk and high on narcotic painkillers, and then assaulted the responding officer. He was sentenced to 43 days in jail. When Begin got out of jail, he sought group therapy and an alternative to powerful prescription drugs. He qualified for medicinal marijuana because of his physical pain and was aware of its effects. Begin started smoking every day. He soon found he no longer needed painkillers for his arm, and his emotional outbreaks from PTSD were more manageable.

Marijuana provided relief for Begin but brought on new complications. Maine is among the six states that allow marijuana to be used to treat PTSD, but the federal government does not. That leaves veterans being treated by the Department of Veterans Affairs in a tough spot: Their caregivers aren't supposed to advise them on using pot for their symptoms.

The VA Provides An Ultimatum

When Begin first started smoking, he saw a primary care provider at the VA for basic health needs. However, once his physician became aware of his marijuana prescription, Begin was given an ultimatum.

"He would continue to write me scripts for the Valium, dextroamphetamine and the Seroquel if I agreed not to smoke pot," he says. 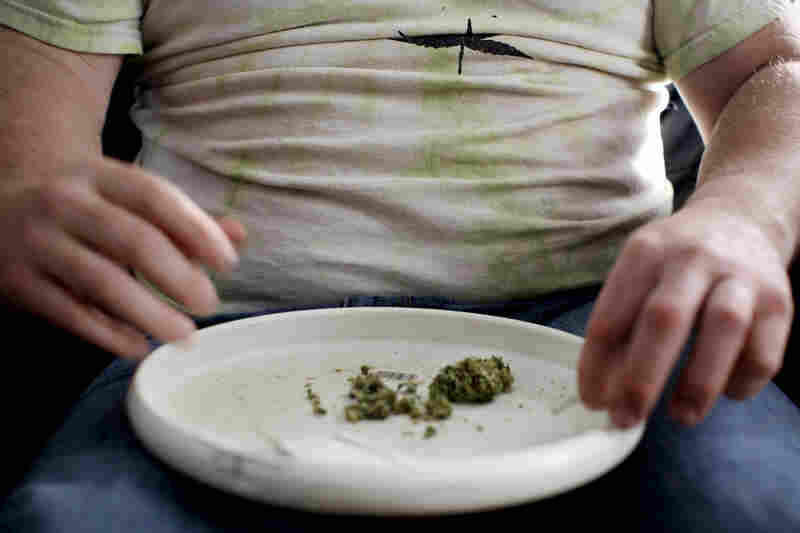 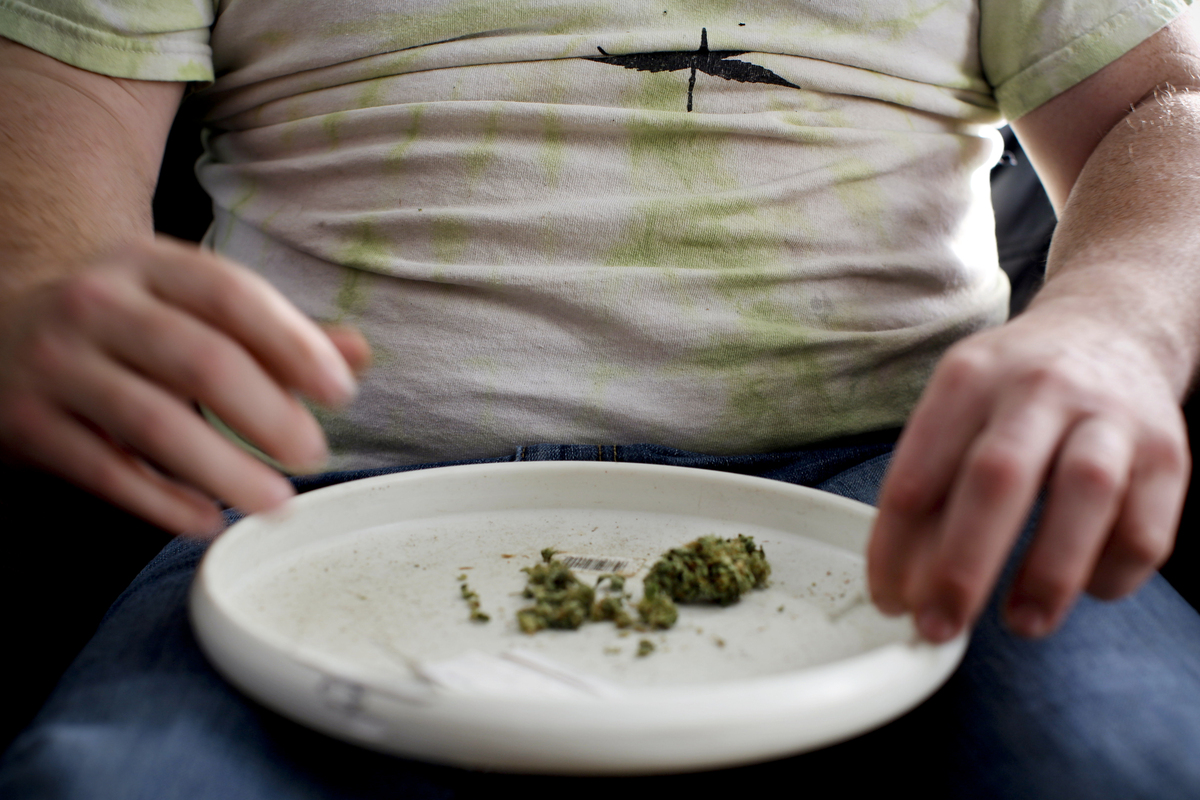 Begin's physician and top VA officials refused to be interviewed for this story. However, psychiatrist Lisa Walker, who works in the VA's telemedicine program in El Paso, Texas, says VA physicians can face severe repercussions if they assist patients in entering a state medical marijuana program.

"A VA physician's completion of a form that would permit a patient to participate in a state medical marijuana program could result in the DEA actually or threatening to revoke the physician's registration to prescribe controlled substances as well as potential criminal charges," Walker says.

Before joining the VA, Walker owned a private practice in New Mexico where she provided PTSD patients the qualification to access the state's medical marijuana program. She can no longer recommend the drug but will still answer any questions her patients have about marijuana.

"I, personally, just in the context of a private appointment with a vet, can answer questions and would feel no constraints about offering what I know about medical cannabis," she says.

Even if veterans with PTSD are informed about marijuana as a treatment option and are in one of the handful of states where it can be used, access is still an issue. VA policies prohibit covering the cost of the drug, so Begin will spend up to $800 a month on his medicine. Researchers in the field believe any change in policy by the VA will have to come from Congress.

"All of the funding and the programmatic guidance comes from the Congress, and there will have to be a consensus amongst the congressional representatives that this is something that's good for the soldiers and veterans, and that they are willing to pay for it," says Dr. Stephen Xenakis, a retired Army brigadier general who is a supporter of alternative treatments for PTSD.

Begin is helping to fight for that cause. He campaigns for medicinal marijuana alongside veterans across the country. He is hopeful other soldiers suffering from PTSD will have access to the medication that changed his life.