Accessibility links
David Sedaris Reads From His 'Santaland Diaries' It's tradition! Writer and humorist David Sedaris reflects on his short tenure as Crumpet the Elf at Macy's. Sedaris first read the "Santaland Diaries" on Morning Edition in 1992 — and instantly, a classic was born. 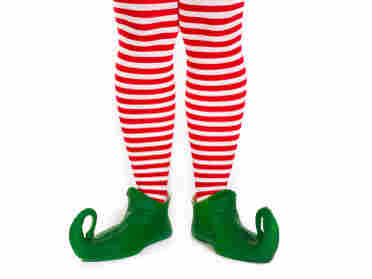 You might not expect "Santa's Helper" to be a career-altering gig, but for David Sedaris, it changed everything. The writer and humorist spent a season working at Macy's as a department store elf. He described his short tenure as Crumpet the Elf in "The Santaland Diaries," an essay that he read on Morning Edition in 1992.

Instantly, a classic was born. Sedaris' reading has become an NPR holiday tradition. Click the "Listen" link above to hear Sedaris read his tale.

OK, let's face it. It's not always easy to feel joy and the holidays; can be a stressful and difficult time for many people. But most people are likely having an easier time, at least, than Crumpet the Elf. Crumpet is the alter-ego of writer David Sedaris.

On this program in 1992, Sedaris read excerpts from his "Santaland Diaries," about his stint as a department store elf. That essay helped launch David Sedaris' career as a playwright and humorist. It was also the beginning of a MORNING EDITION holiday tradition, which continues today, as we hear once again from Crumpet the Elf.

DAVID SEDARIS: I wear green velvet knickers, a forest green velvet smock and a perky little hat decorated with spangles. This is my work uniform.

We were given a demonstration of various positions in action, acted out by returning elves, who were so onstage and goofy that it made me a little sick to my stomach. I don't know that I could look anyone in the eye and exclaim: Oh, my goodness, I think I see Santa. Or: can you close your eyes and make a very special Christmas wish?

Everything these elves say seems to have an exclamation point on the end of it. It makes one's mouth hurt to speak with such forced merriment. It embarrasses me to hear people talk this way. I think I'll be a low-key sort of elf.

SEDARIS: Twenty-two thousand people came to see Santa today and not all of them were well-behaved. Today, I witnessed fistfights and vomiting and magnificent tantrums. The back hallway was jammed with people. There was a line for Santa and a line for the women's bathroom. And one woman, after asking me a thousand questions already, asked: Which is the line for the women's bathroom? And I shouted that I thought it was the line with all the women in it. And she said: I'm going to have you fired.

SEDARIS: The overall cutest elf is a fellow from Queens named Ritchie. His elf name is Snowball and he tends to ham it up with the children, sometimes tumbling down the path to Santa's house. I generally gag when elves get that cute, but Snowball is hands-down adorable. You want to put him in your pocket.

Yesterday, Snowball and I worked as Santa elves, and I got excited when he started saying things like: I'd follow you to Santa's house any day, Crumpet. It made me dizzy, this flirtation. By mid-afternoon, I was running into walls. By late afternoon, Snowball had cooled down.

By the end of our shift, we were in the bathroom changing our clothes, and all a sudden we were surrounded by five Santas and three other elves. All of them were guys that Snowball had been flirting with. Snowball just leads elves on - elves and Santas.

SEDARIS: This morning, I worked as an exit elf, telling people in a loud voice: This way out of Santaland.

A woman was standing at one of the cash registers, paying for her pictures while her son lay beneath her, kicking and heaving, having a tantrum. The woman said: Riley, if you don't start behaving yourself, Santa is not going to bring you any of those toys you asked for.

The child said: He is too going to bring me toys, liar. He already told me.

The woman grabbed my arm and said: You there, elf. Tell Riley here that if he doesn't start behaving immediately, then Santa's going to change his mind and bring him coal for Christmas.

I said that Santa changed his policy and no longer traffics in coal. Instead, if you're bad, he comes to your house and steals things. I told Riley that if he didn't behave himself, Santa was going to take away his TV and all his electrical appliances and leave him in the dark.

The woman got a worried look on her face and said: All right. That's enough. I said he's going to take your car and your furniture, and all of your towels and blankets and leave you with nothing. The mother said, No, that's enough - really.

SEDARIS: This afternoon, I was stuck being a photo elf for Santa-Santa. Santa-Santa has an elaborate little act for the children. He'll talk to them and give a hearty chuckle and ring his bells. And then he asks them to name their favorite Christmas carol. Santa then asked if they'll sing it for him.

The children are shy and don't want to sing out loud. So Santa-Santa says: Oh, little elf, little elf, help young Brenda here sing that favorite carol of hers.

It didn't seem fair that I should have to solo, so I sang it the way Billie Holiday might have sang if she'd put out a Christmas album.

(Singing as Billie Holiday) Away in a manger, no crib for a bed, the little Lord Jesus lay down his sweet head.

Santa-Santa did not allow me to finish.

SEDARIS: This evening, I was sent to be a photo elf. Once a child starts crying, it's all over. The parents had planned to send these pictures as cards or store them away until the child has grown and can lie, claiming to remember the experience.

Tonight, I saw a woman slap and shake her crying child. She yelled: Rachel, get on that man's lap and smile or I'll give you something to cry about. Then she sat Rachel on Santa's lap and I took the picture, which supposedly means on paper that everything is exactly the way it's supposed to be, that everything is snowy and wonderful.

It's not about the child or Santa or Christmas or anything, but the parents' idea of a world they cannot make work for them.

GREENE: It's a tradition that began on this program 21 years ago. David Sedaris reading from his essay "The Santaland Diaries."

It is MORNING EDITION from NPR News. I'm David Greene.