Accessibility links
So Long, Candlestick Park, And Thanks For All The Fog Monday is the last game at Candlestick Park for the San Francisco 49ers. The NFL team is moving, and the park, famous for its windy and foggy weather, is being demolished after this football season. It leaves behind more than 50 years of memories. 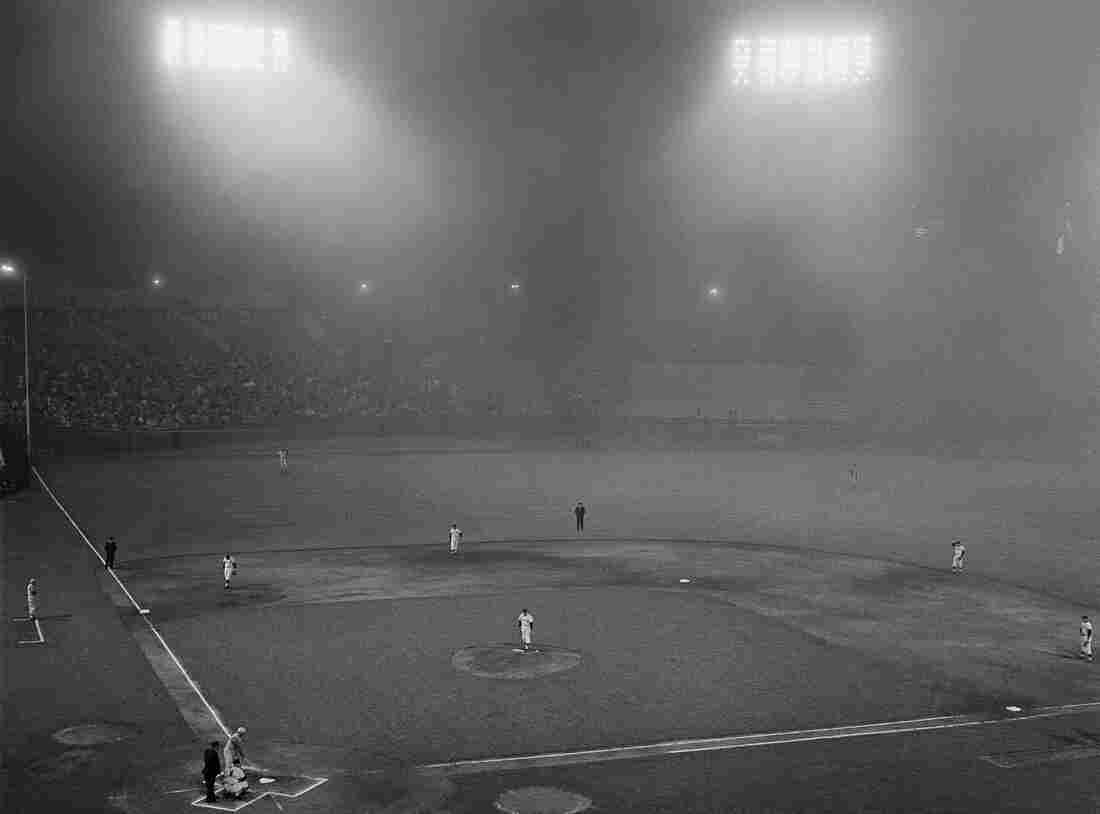 A low, wet fog swirled across the field at Candlestick Park in San Francisco as the Giants opened a three-game series against the Cincinnati Reds on Aug. 31, 1962. AP hide caption 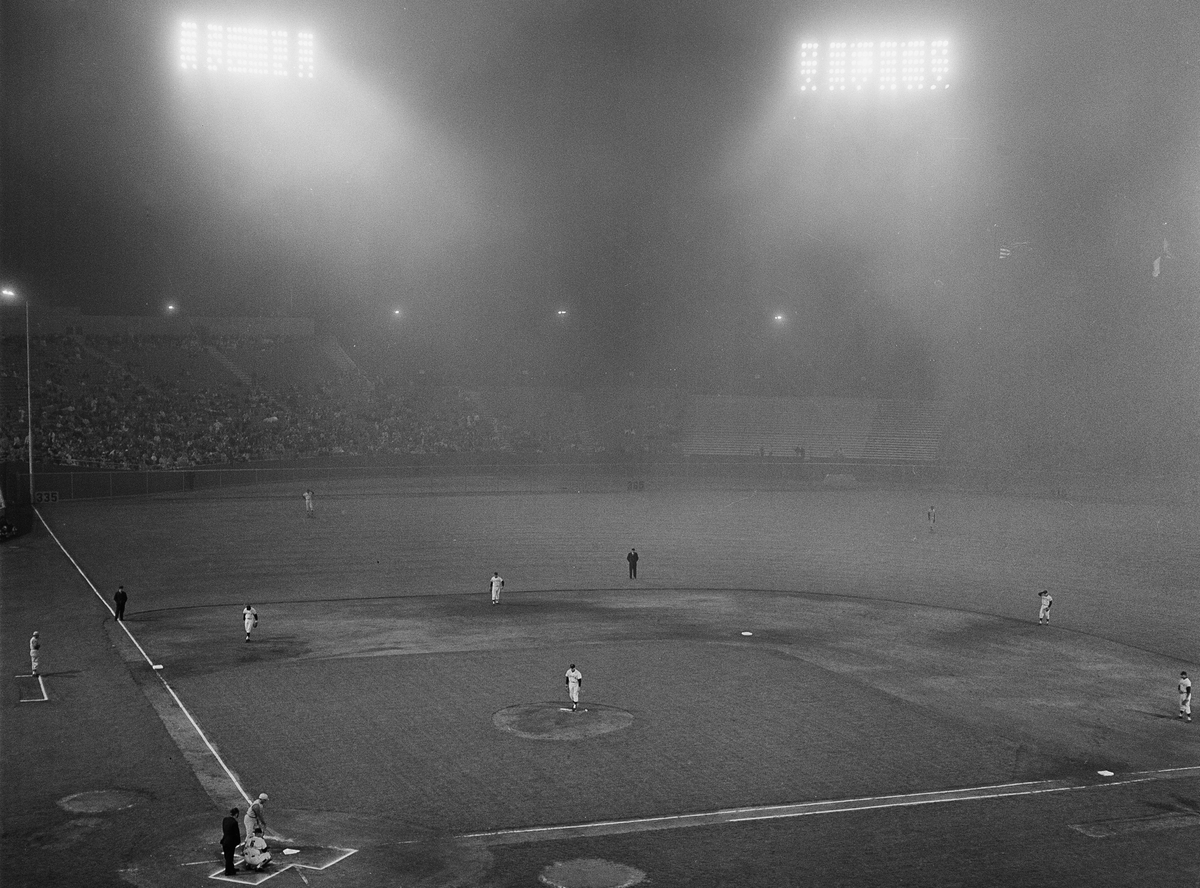 A low, wet fog swirled across the field at Candlestick Park in San Francisco as the Giants opened a three-game series against the Cincinnati Reds on Aug. 31, 1962.

In San Francisco, the last Monday Night Football game of the NFL season is a significant moment for Bay Area sports fans. The San Francisco 49ers and Atlanta Falcons are playing the final regular season game at historic Candlestick Park.

The 49ers are moving south to a plush new home in Santa Clara next season. Candlestick is set to be demolished, leaving behind more than a half-century of memories. It is prompting goodbyes — and, for some, good riddance — to the weather-beaten stadium known as the 'Stick.

As told in Candlestick Park by Ted Atlas, the story goes that in 1957, Horace Stoneham, owner of baseball's New York Giants, was in San Francisco looking for a new home for his team.

Some local boosters took him to the spot on the shore of San Francisco Bay where Candlestick Park ultimately was built. They took him in the morning, when the winds were calm, and Stoneham liked it. He signed the deal, and building began. 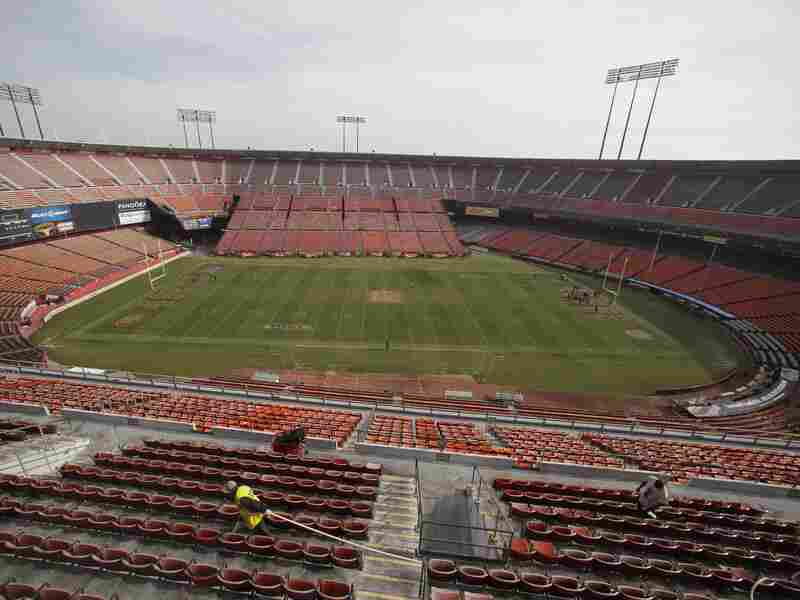 Candlestick Park in San Francisco is closing after more than 50 years of sports memories. The San Francisco 49ers are about to play their last NFL game at the stadium they have called home since 1971. Candlestick Park was also home to baseball's Giants from 1960 to 1999. Eric Risberg/AP hide caption 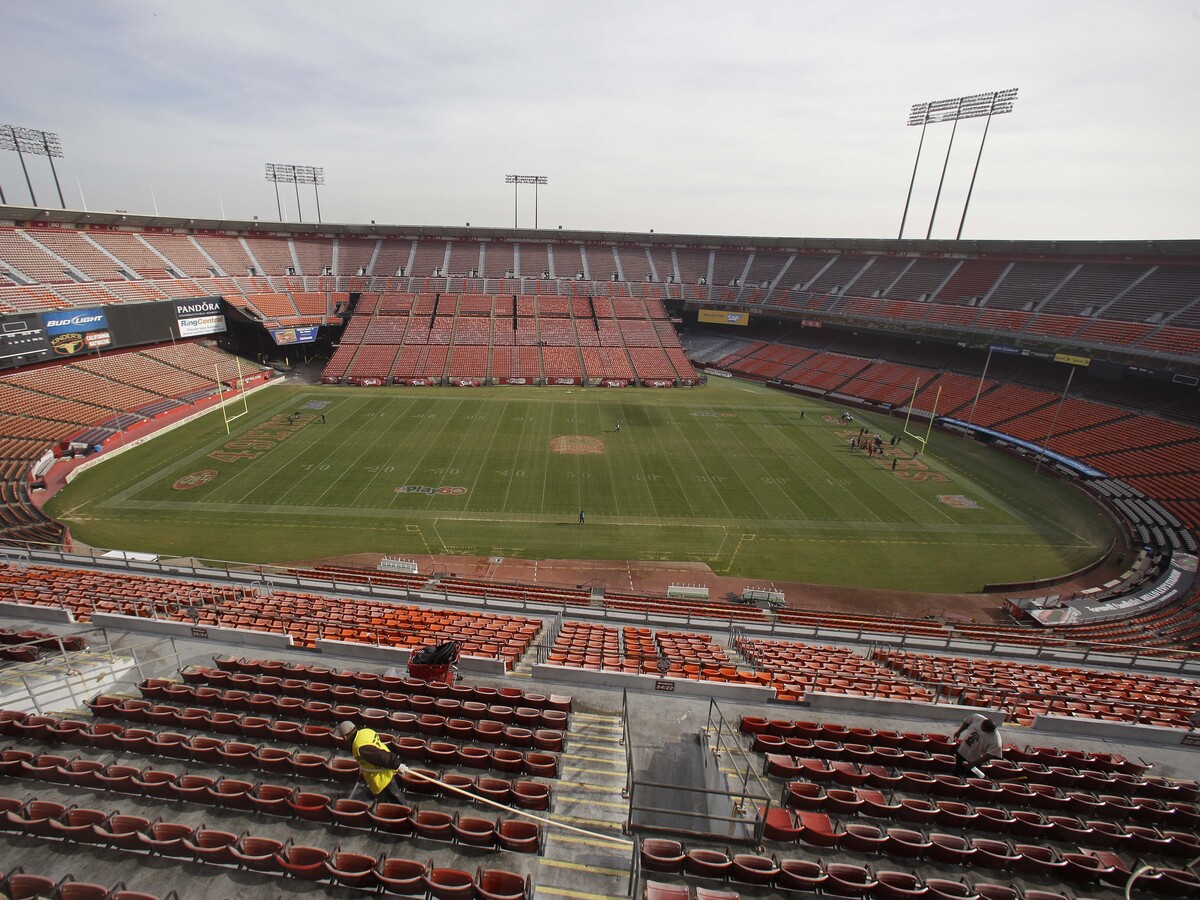 But on a return visit, Stoneham went later in the day. It's said he asked a worker: "Does the wind often blow like this?"

"Yeah, every day," the worker replied. "But only in the afternoon and early evening."

So began, in 1960, Candlestick's Jekyll and Hyde legacy and its crowning sports moments — like the day in 1970 when Willie Mays got his milestone 3,000th hit at Candlestick. But there was always the park's shivery history, too. It numbed San Francisco Giants first baseman J.T. Snow.

"There was just nowhere to hide from it," Snow says. "You just had to accept it."

Snow played home games at Candlestick for the final three seasons the Giants were there — 1997, '98 and '99 — and he heard the complaints from opponents as soon as they got on base.

During baseball season, the cold wind was only half of it. Candlestick groundskeeper Roger Revel remembers talking to a marketer for the Giants in the early 1990s about a promotion the team called "fun in the sun," featuring more day games.

"We were standing down in the right-field corner and she said: 'Do you think this is going to be a good idea?' " Revel says. It was then that the fog began "howling in," Revel says, "just in time for the game to start, and that was pretty much the way it was the entire season. It was the season from hell."

The fog and the wind, ironically, were most treacherous during what should've been the languid spring and summer months of the baseball season. The wind and fog didn't just blow; they swirled in the park and kept swirling, even after the stadium walls were built up in 1971 when the NFL's 49ers joined the Giants as tenants.

But through it all, Bay-area fans endured, earning a hallowed "Croix de Candlestick" button for baseball bravery if they stayed for an extra-inning game. And the shows, more than five decades worth, went on.

The wind even touched John, George, Ringo and Paul, who played the 'Stick in the summer of 1966. That Beatles concert, where you could get a Candlestick bleacher seat for $4.50, turned out to be the group's last big commercial show.

Saying Goodbye To The 'Stick 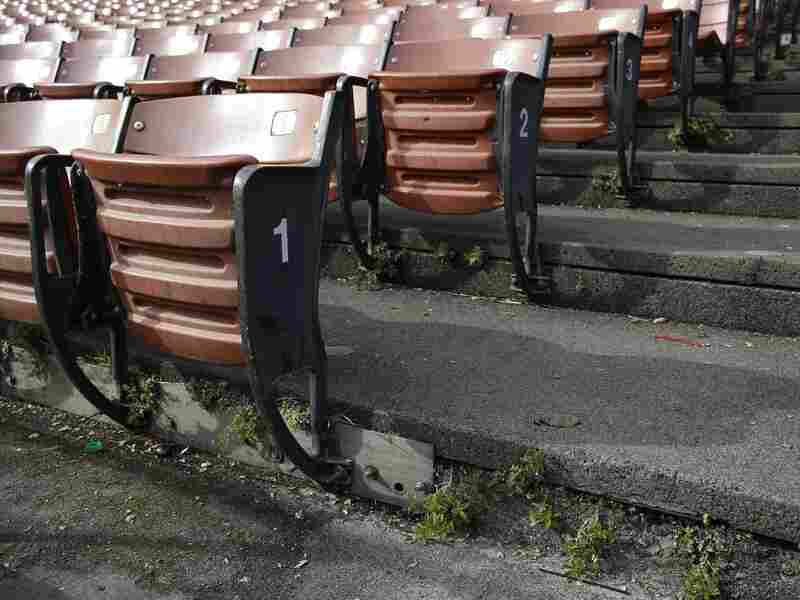 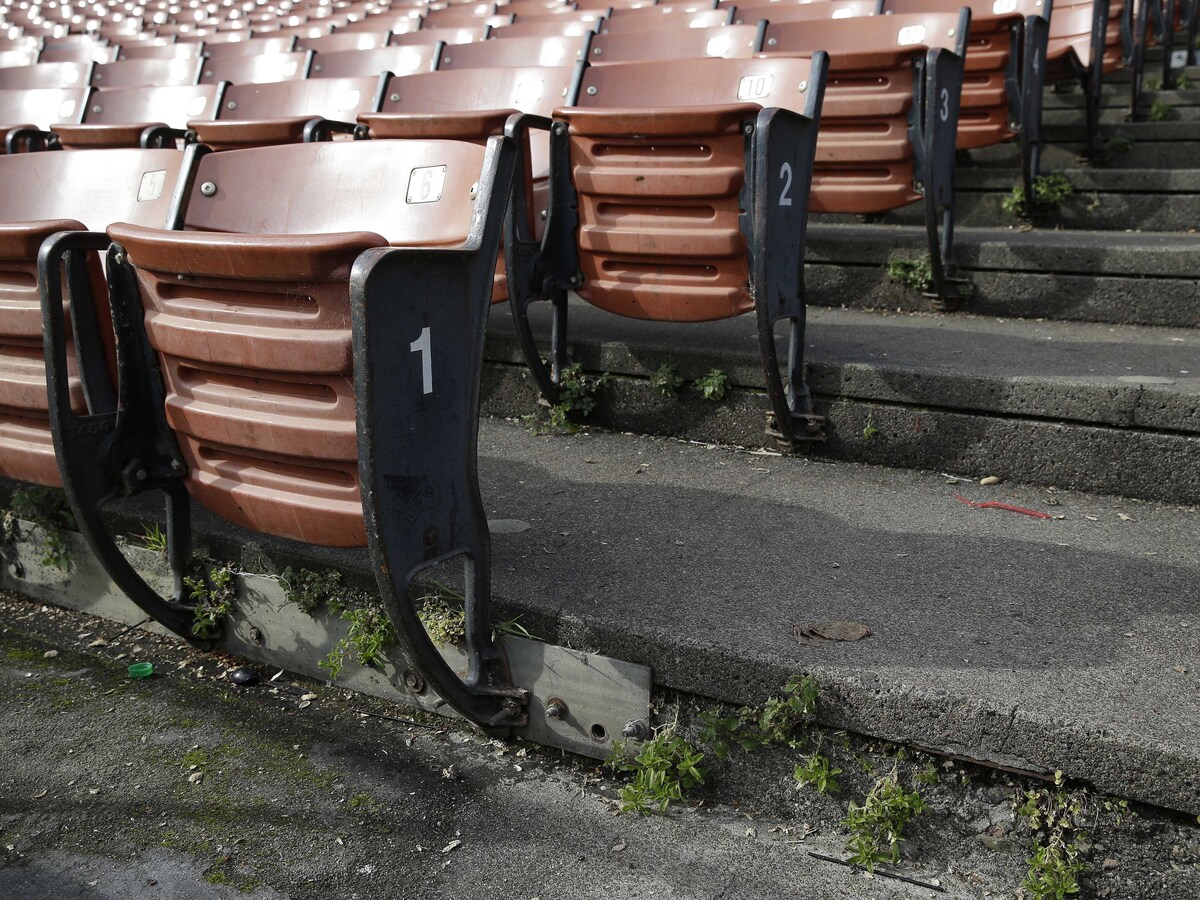 Plants grow through cracks in the lower seating at Candlestick Park in San Francisco.

On a recent day, chief engineer Mike Gay led reporters on a farewell tour of the park, where he has worked for the past 35 years. There were the predictable stops, like the spot where 49ers quarterback Joe Montana threw receiver Dwight Clark a famous 1982 touchdown against the Dallas Cowboys, ushering in an era of 49ers dominance.

There were private memories, too, like when Giants executive Mario Alioto reminisced about playing catch with Willie Mays before a game when Alioto was a 12-year-old batboy for the Giants.

"I was really nervous," Alioto said. "For some reason, when a Major League Baseball player throws a ball, it seems to rise — at least for a little kid like me, everyone thought it was going to go over my head. But I made every effort to catch every one."

What the tour didn't show were any telltale signs of the Oct. 17, 1989, earthquake that jolted northern California during Game 3 of the World Series between the Giants and the Oakland Athletics. The quake killed 60 people and left piles of destruction, but the 'Stick was relatively unscathed.

"Some of the lights kind of broke from the jarring and stuff, and there's some other repairs. But all in all, the place was pretty sound," said Mike Gay.

It is a testament, he says, to the way Candlestick was built; it was the first baseball stadium made completely of reinforced concrete.

But even Gay acknowledges that everything comes to an end — including stadiums. There's a rundown feel to Candlestick: rusting seats with peeling paint, chipped concrete throughout and narrow concourses. It certainly didn't help the 'Stick's reputation when old wiring was blamed, in part, for two blackouts during a 2011 football game.

That is moot now. Years of battling over Candlestick between the 49ers and the city of San Francisco are replaced, at least from the team's perspective, by the optimism of moving south to the Silicon Valley stadium. The team reportedly promises smartphone apps that will let fans order food and check on bathroom lines.

In the years since the move was announced, there has been grumbling that playing 40 miles away means the 49ers will lose their San Francisco identity. In a small yet pungent gesture, the team guarantees Candlestick's legendary garlic fries will be on the menu at the new stadium.