Accessibility links
Don't Knock The Nog Until You've Tried This One Maria del Mar Sacasa, author of Winter Cocktails, says eggnog can, and should, be done right. After playing with milk-to-booze ratios and spice combinations, she believes she has the perfect recipe for basic eggnog. 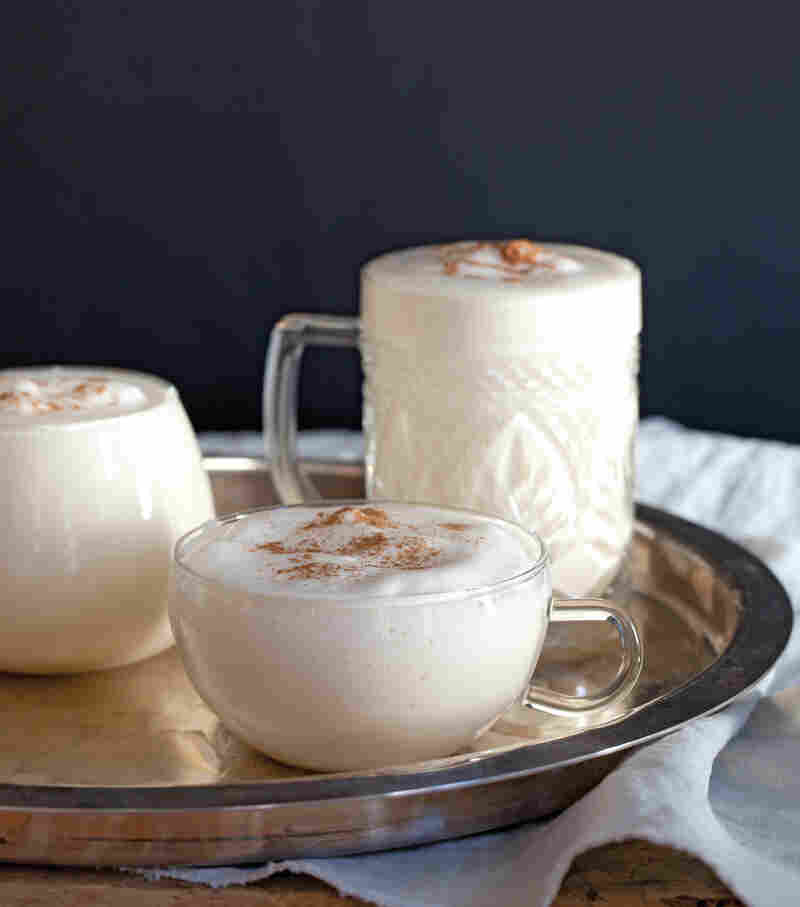 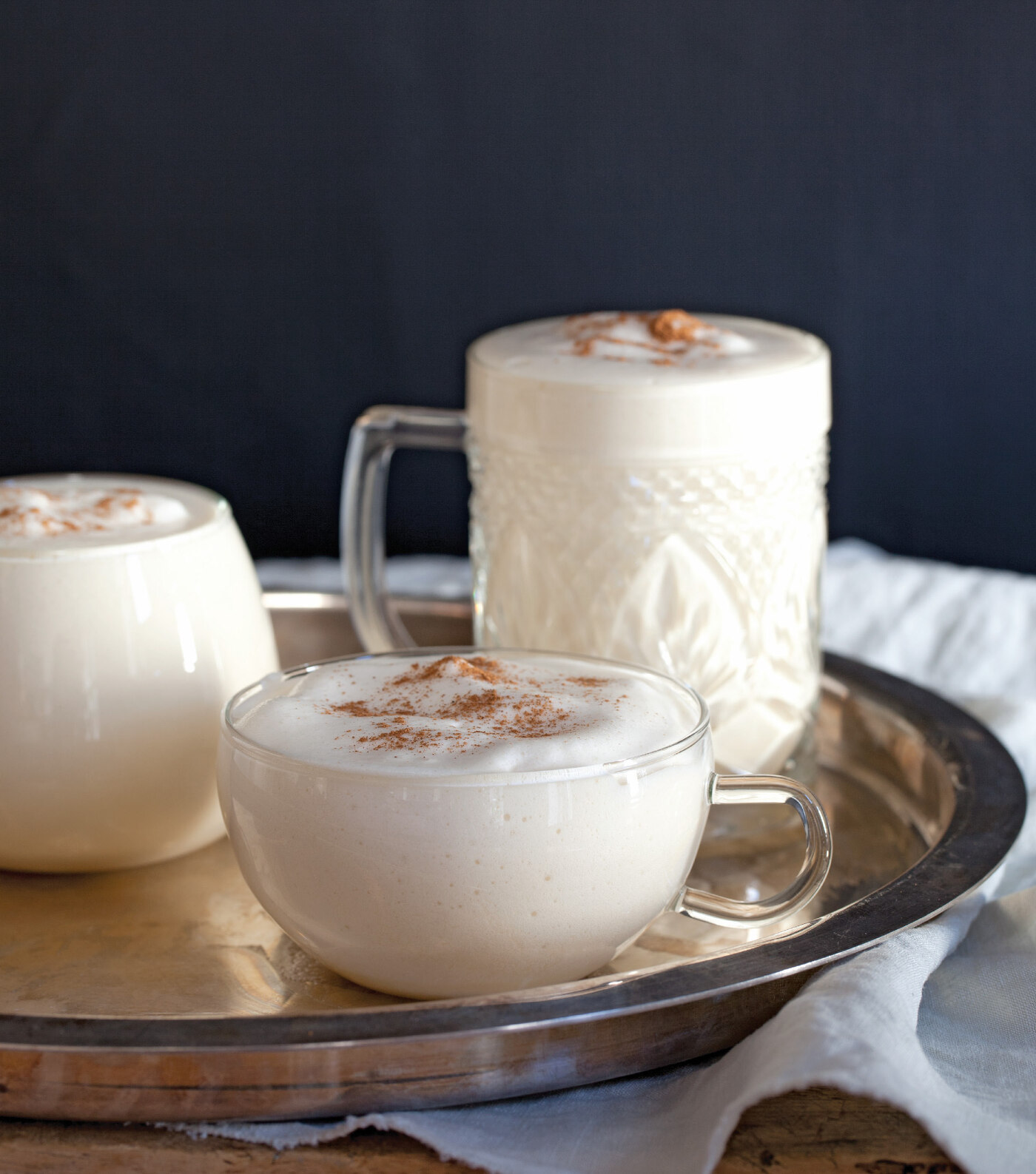 We ran an unofficial office poll at NPR last week, via email: "Where do you weigh in on eggnog? Love it? Hate it?"

Those who hate it really hate it. They used words like "detest," "loathe" and "ick." They also used font sizes well above 14 point and broke out the red type to emphasize their distaste.

But the haters were in the minority. By about 2 to 1, NPR is an eggnog drinkin' kind of place, but — and this was emphasized by many — only if it's eggnog done right. That means: not too sweet, not too thick and just the perfect amount of booze.

Fortunately, we might be able to satisfy the lovers and convert some of the haters with Maria del Mar Sacasa's recipe for this seasonal concoction.

See, the author of Winter Cocktails was once an eggnog hater, too. Her first encounter with eggnog at a holiday party had her covertly pouring her drink into a potted plant. There was plenty not to like. "How it tasted," she recalls, "how awful the texture!"

Years later, while researching the drink for her book, she realized she might have been put off by eggnog done badly.

"I ran out to the supermarket and I bought a few of the eggnogs and I tried everything from the really cheap versions in the cartons to the higher end ones, and unfortunately they were exactly what I did not want in my eggnog," del Mar Sacasa says.

That is to say, artificially flavored, flat tasting, too sweet and too thick (these are similar complaints that cropped up in NPR's unofficial office poll).

So del Mar Sacasa set out to make her own eggnog.

"I tested a lot of recipes I found in books and in magazines and online and I did come across a few that had an interesting twist, which was adding egg whites whipped into soft peaks into the mixture," del Mar Sacasa says. "And this gave it this really beautiful airy, fluffy quality, similar to cappuccino."

After playing with milk-to-booze ratios and spice combinations, del Mar Sacasa believes she has the perfect recipe for basic eggnog. "This tastes like melted ice cream. It does. I promise."

Eggnog is a milk- or cream-based beverage sweetened with sugar and spiked with spirits such as rum, brandy, whiskey or a combination thereof. Eggs, of course, are the main ingredient — and are responsible for the drink's shady reputation for harboring germs. However, fresh eggs are unlikely to cause salmonella infection or other bacteria-bred illnesses. And since eggs give eggnog its characteristic velvety texture and cloud-like froth — the yolks build the custardy base and the whites add lightness — there are no substitutions. If you're concerned about bacteria, wash the eggs before using them because any bacteria would come from the shell.

In a large bowl, whisk egg yolks, brown sugar and salt until thickened and pale brown in color, 2 to 3 minutes. Whisk in cream and milk, followed by the brandy, rum and vanilla.

Transfer cream mixture to a punch or serving bowl. Fold in egg whites with a rubber spatula and ladle portions into cups. Sprinkle with freshly grated nutmeg and serve.

**All eggnog recipes may be made without alcohol.

This eggnog variation goes hand-in-glove with the coming of the colder months and holiday festivities. Pumpkin puree, brown sugar and spices blend with milk, cream and bourbon for a drink that rivals dessert.

Melt butter over medium heat in a medium saucepan. Add pumpkin, cinnamon, allspice and salt and cook, stirring, for 2 minutes. Whisk in cream, milk, bourbon, and brandy or cognac and bring to a simmer. Remove from heat and cover to keep warm.

In a large bowl, whisk egg yolks, brown sugar and vanilla until thickened (wrap a damp kitchen towel around the base of the bowl to keep it steady while you whisk). Pour the pumpkin mixture into the egg yolk mixture, whisking constantly until well incorporated. Pour mixture back into saucepan and cover to keep warm.

Transfer cream mixture to a punch or serving bowl. Fold in egg whites with a rubber spatula and ladle portions into warmed heatproof glasses or mugs. If serving cold, allow the pumpkin base to cool to room temperature and then refrigerate until well chilled. Fold in egg whites and ladle into chilled glasses.