Accessibility links
What's In Store For Commuting's Future? (Hint: There's Hope) Students thinking about the road ahead for transportation imagine everything from flying cars and hovercraft to crowdsourced car design and driverless vehicles. A key part of planning, says one expert, is that changes must not only make life better for commuters, they must also be done in a way "that this planet can support." 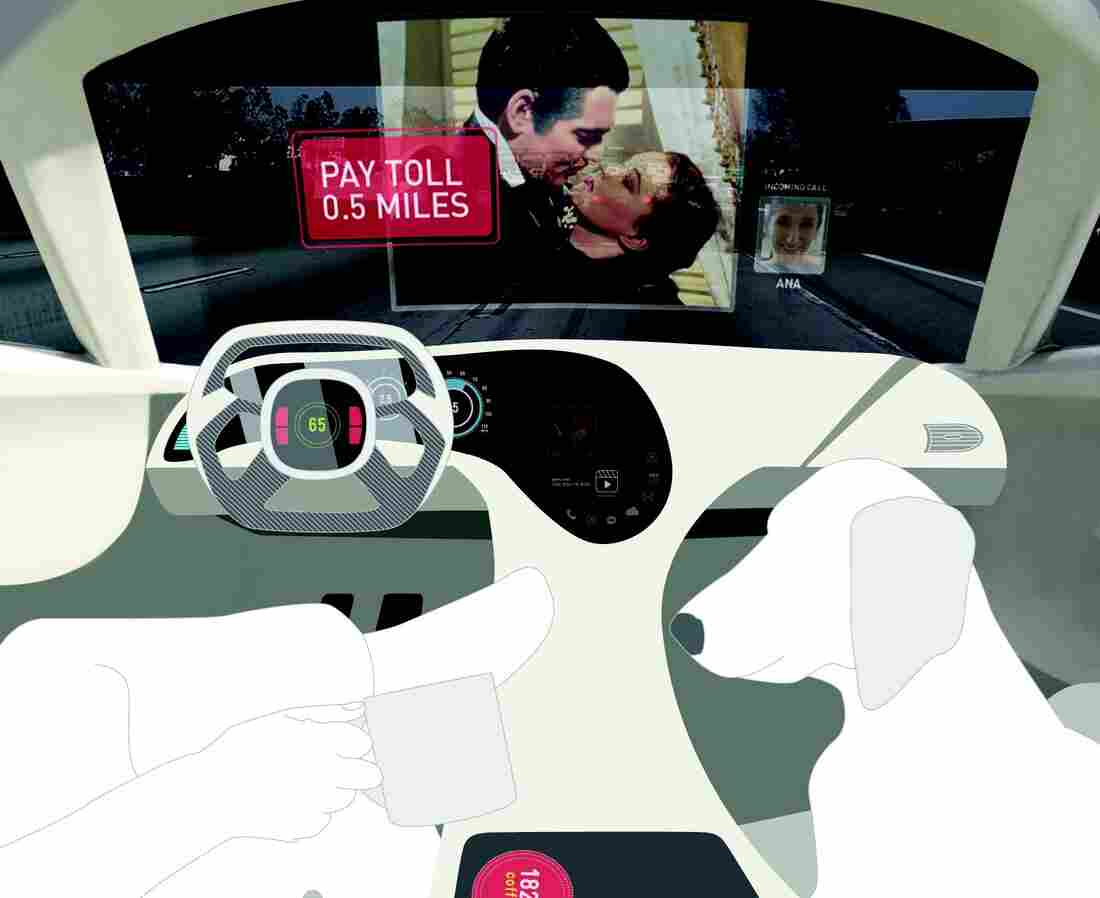 Imagine if the road ahead includes driverless cars. Jiha Hwang/Illustration from The Car in 2035: Mobility Planning for the Near Future is courtesy of the Civic Projects Foundation hide caption

toggle caption
Jiha Hwang/Illustration from The Car in 2035: Mobility Planning for the Near Future is courtesy of the Civic Projects Foundation 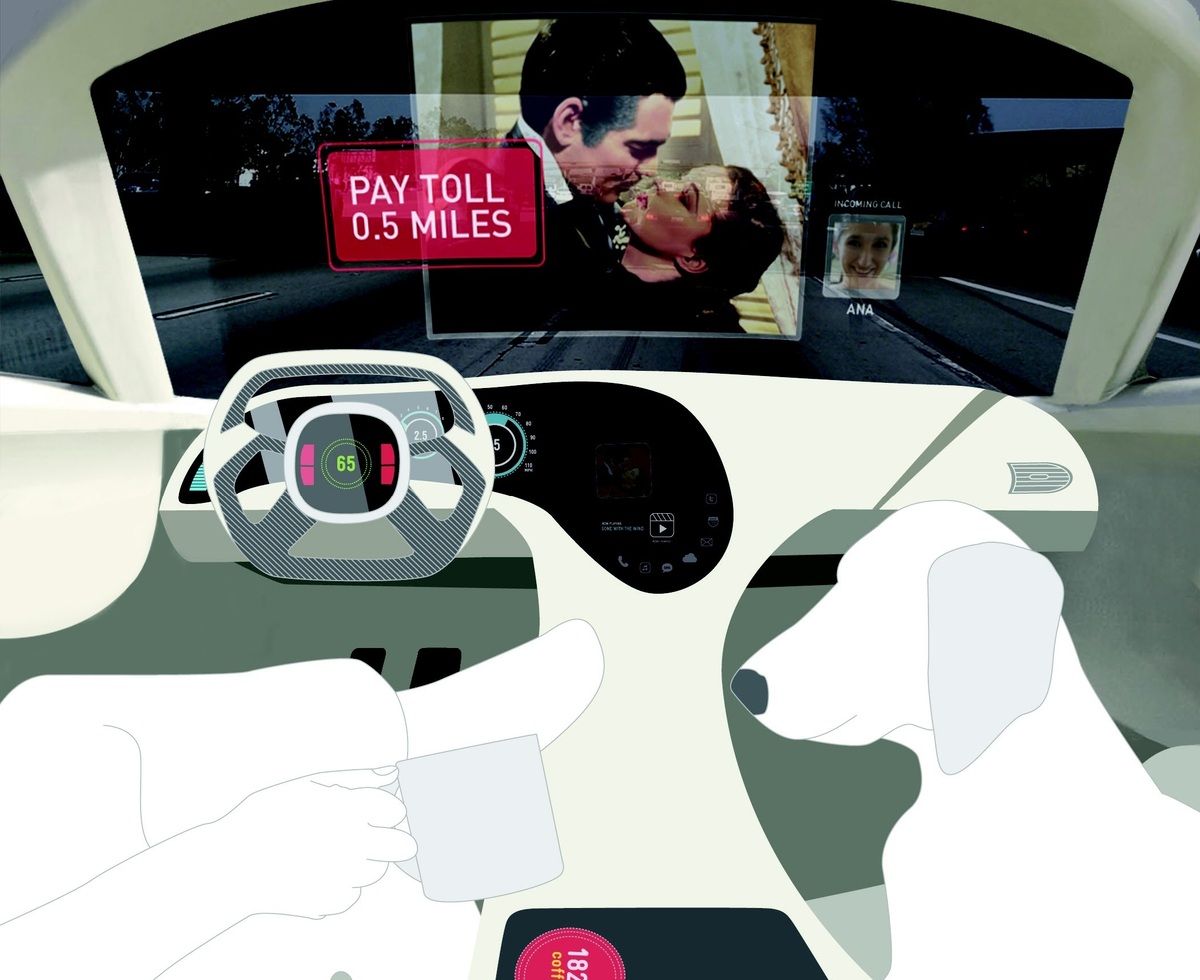 Imagine if the road ahead includes driverless cars.

Jiha Hwang/Illustration from The Car in 2035: Mobility Planning for the Near Future is courtesy of the Civic Projects Foundation

If you want to look into the future of commuting, you need only go to the graduate transportation program at the Art Center College of Design in Pasadena, Calif.

The program's creator, Geoff Wardle, says he started it because he sees a coming tipping point "where all aspects of transportation, whether it's of people or goods, is going to go through some fundamental changes, and we've seen the early signs of that even with the convolutions the automobile industry has been through recently."

In the program's design studio, you can see almost every pie-in-the-sky idea about transportation — some as out there as flying cars to hovercraft. Most are more (ahem) down to earth.

Student Russell Singer is working on a project to crowdsource car design — so instead of going to a big car company you could build your own car that fits your needs.

"What we want to do is get it almost to this level of simplicity, like a Lego car, where you can just kind of plug things together, and you can experiment with the function and the form factor of the vehicle without needing to be an engineer or highly trained transportation designer," Singer says.

The idea is that open-source designing could potentially make it easier to come up with breakthroughs of things like fuel efficiency.

Student David Poblano says one of the most important things he's hoping to see in the future is the connection between social networking and travel.

"The transportations systems and networks that we look at, they have a certain amount of demand and they kind of track how many people get on to the trains at certain times, but they don't necessarily know all the information about how you get from your home to the bus to the subway station to a taxi," he says.

Right now, Poblano says, we're all connected but our transit systems aren't. Think about it: If Facebook knows that you like golf, it'll show you ads for Big Bertha drivers. But if your transportation system knew what percentage of people were going to work on any given day and what direction they were going in, it could change the number signals to divert traffic through less congested streets and add more train cars or buses.

One thing to keep in mind, Wardle says, is that our current transportation is totally unsustainable. For example, 75 percent of commuters drive alone to work. Studies show we're likely to see another peak in the number of vehicles on the road.

"So as well as making life much better for people who commute, making it a much more seamless part of their everyday lives, we have to figure out how to do that in a way that this planet can support, " Wardle says.

That's something car designers and transportation designers might not have thought of in the past. And student David Day Lee says the biggest problem in transportation isn't really design or infrastructure; it's the way we think.

For these changes to happen, all the students assume that to some degree or another our cars will be driving themselves. And every step toward driverless cars opens up a new realm of possibility for what your commute could be like. It changes everything.

Student Calvin Ku says he sometimes holds out little hope that commutes can improve. But, he says, solving transportation problems is akin to fighting a disease. "We can't stand in the corner and just crawl into a ball and hope it goes away," he says. "And you can see the range of ways of tackling transportation problems in [the graduate design studio], with these people here. If we can collectively work together, I think we can solve these problems."

That's the message from these students of transportation: Your commute will definitely get better. It has to.