Accessibility links
Harold Bradley: The Guitarist Of Nashville Past "Everything that was happening in the studio, that was my world," the prolific musician says of his career as a go-to guitarist in Tennessee. Now 86, Bradley has worked across many decades and on thousands of songs. 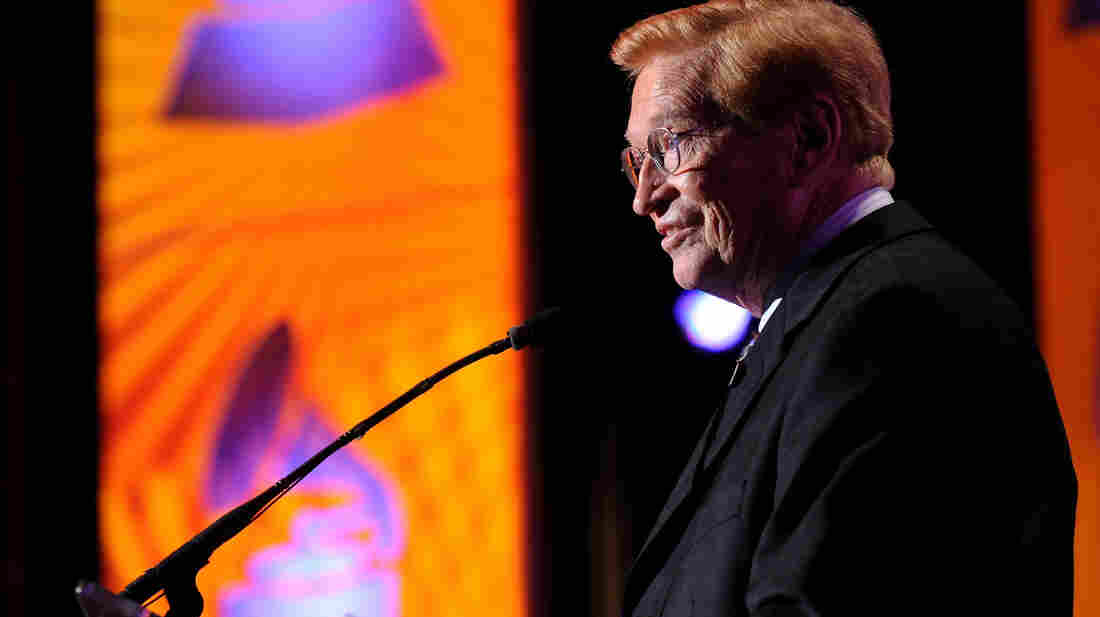 Some of Nashville's most classic songs — Roy Orbison's "Only the Lonely," Loretta Lynn's "Coal Miner's Daughter," Tammy Wynette's "Stand by Your Man" and Elvis Presley's "Devil in Disguise," to name a few — have one thing, or person, in common: guitarist Harold Bradley. In his decadeslong career, Bradley, now 86, has played on literally thousands of songs. Some say he's the most widely recorded guitarist in history.

Bradley is the brother of one of Nashville's legendary record producers, Owen Bradley. In the early '50s, the brothers opened one of the first recording studios in the city. They formed the A-Team: a dozen session musicians who, while you may never have heard their names, helped build Nashville. These musicians thrived in the background, ready to play behind any star who came in with a new album to create. In a discussion with Morning Edition's David Greene, Bradley described the session-recording process.

"We had a setup," he says. "We would work from 10 to 1, 2 to 5, 6 to 9 and 10 to 1 at night. To me, it was like going to a party. A Brenda Lee party in the morning, then a Ray Stevens party in the afternoon. A Bill Monroe party and then end up with Henry Mancini and Patsy Cline and Elvis and just other people. I realized, after a while, that it wasn't my talent: It was the talent of the stars. Then, I was just glad to be on board."

While Bradley was happy to be along for the ride, he remembers moments working with some of music's rising stars that were not so sweet.

"My first session with Elvis, I tune up and I'm standing around," Bradley says. "I hear all this commotion out in the alley. Well, I had finally gotten to where I could afford a new car and I had a Nash station wagon parked right behind the studio. I went out and opened the door, and there was a sea of kids out there. They wanted to see Elvis, and they were standing on my station wagon. I just closed the door, shook my head and I thought, 'I don't know how much money I'm going to make with this guy, but it's not going to be enough to pay for my car.' "

Bradley also had to deal with his brother, who kept him and the other session musicians on a tight leash. They were not allowed to "color outside the lines," as the prolific guitarist puts it. The rules were meant to keep the spotlight firmly on the singers. While Bradley admits that the guidelines his brother imposed were strict at times, he says he and his session-mates learned how to deal with them.

"As soon as you come into the studio and you walk in the door, you leave your ego outside," Bradley says. "Whatever you think you are, you're not. You're going to go in there and you're a piece of clay, and you're going to mold yourself into whatever is musically happening on that session."

While Bradley was observing history firsthand in these recording sessions, he says he didn't realize it at first. In fact, he wasn't even keeping records.

"Everything that was happening in the studio, that was my world," Bradley says. "That was as big as it got. And then one day, my brother came up and he said, 'Well, we're doing pretty good. We've got 25 out of the top 50 songs.' All of a sudden I'm thinking, 'That stuff we did in the studio, people are listening to that all over the world? Maybe I better pay some attention to what's happening a little bit more because, goodnight! Whatever I'm playing, these people are listening to it. And I better be good.' "