Accessibility links
Portrait Show Brings Photographer-Subject Encounters Into Focus In photographer Chuck Close's portrait of model Kate Moss, Moss looks pretty ordinary — her skin is a confetti of freckles and pores, and there's no airbrushing to be seen. Moss trusted in Close's art, but, as an exhibit at Washington's Phillips Collection demonstrates, that isn't always the case.

When someone takes our picture, we usually deliver a mile-wide grin, but there's not a smile in the room at the Phillips Collection's photography show in Washington. 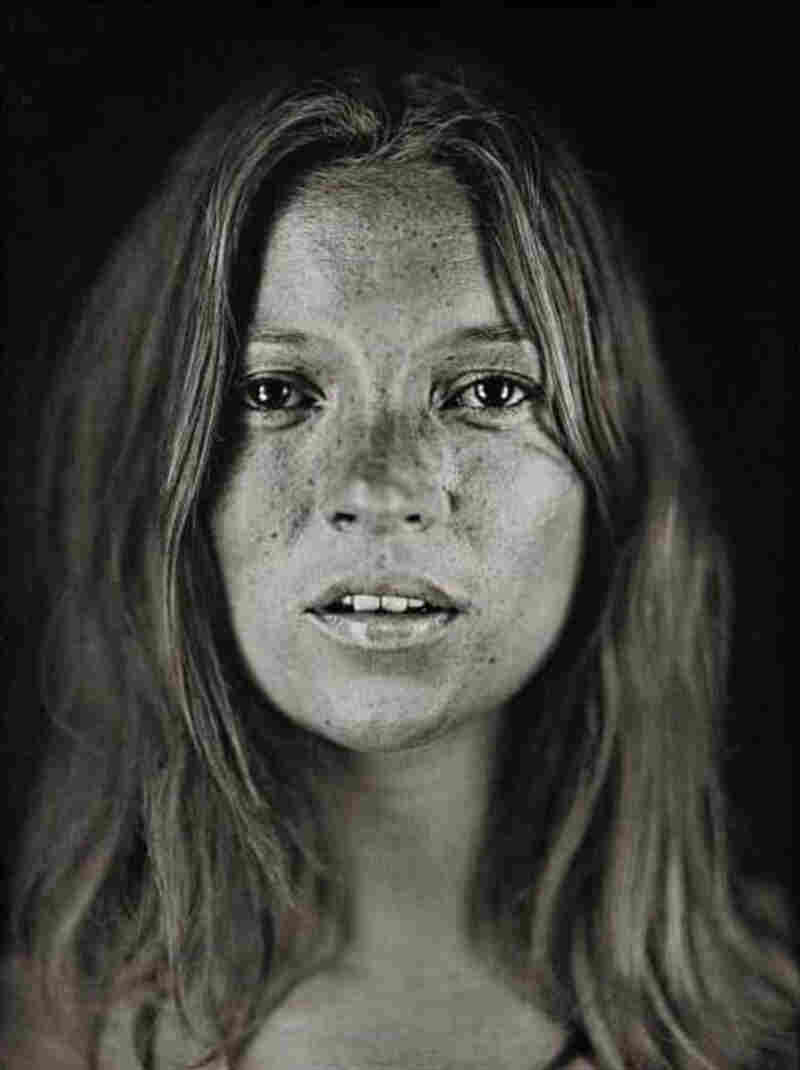 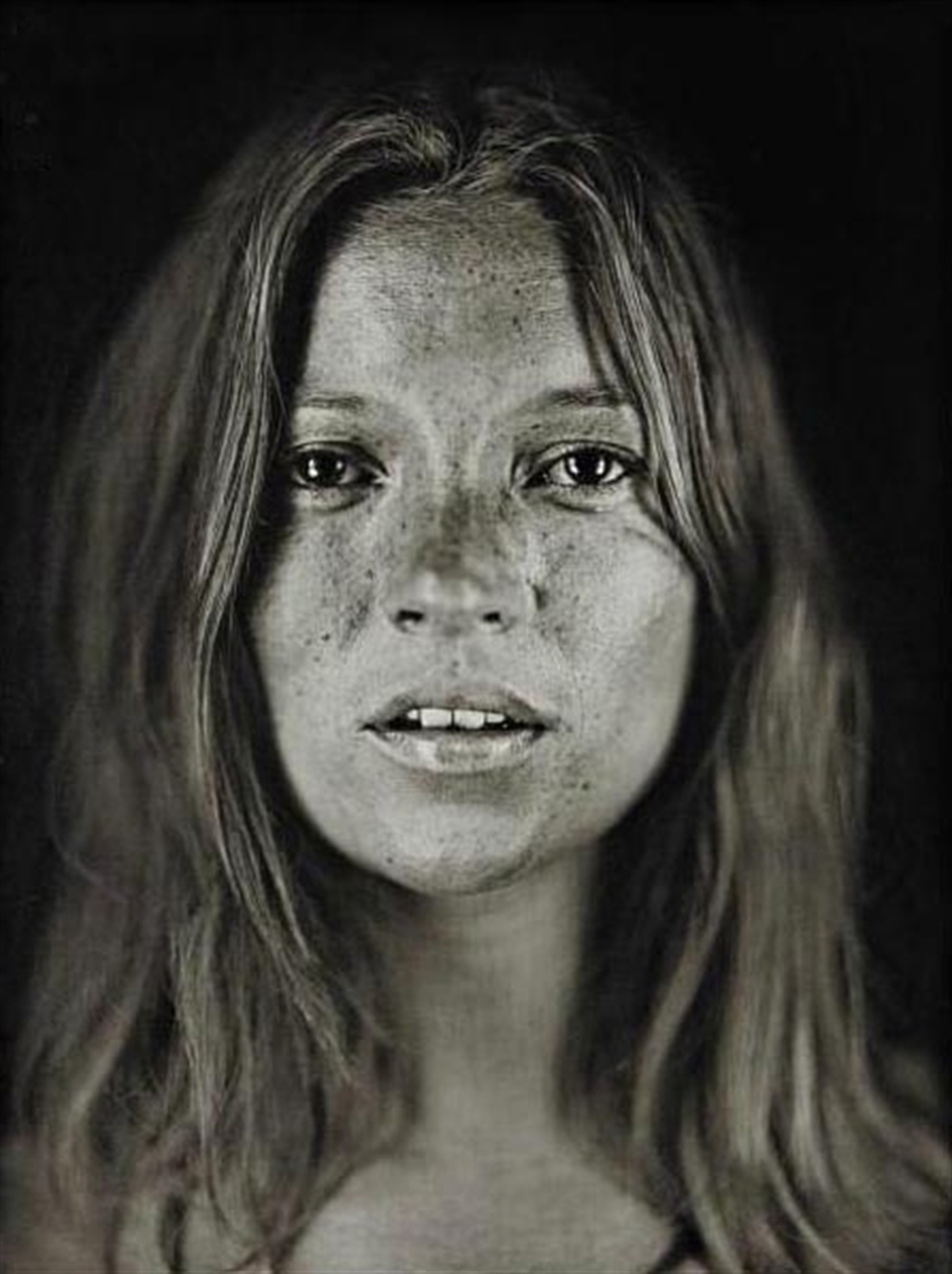 The exhibit mostly consists of portraits of inner lives, taken by various photographers, and it's about the encounter between the two participants. Susan Behrends Frank curated the small show, called "Shaping a Modern Identity," which is running through Jan. 12.

"I see this whole spectrum of a conversation," Frank says. "It's like a dance between the photographer and the subject."

Photographs were chosen from the collection of Joseph and Charlotte Lichtenberg, and while there are no big grins, there are plenty of poses. In a color series called "Nomads," Andres Serrano invited various people in front of his camera.

"He showed up with a plain backdrop, lights, his camera," Frank explains. "He asked these people to pose; he said all he asked of them was to look left or right."

One of Serrano's subjects — he called himself Sir Leonard — is a majestic, monumental African-American man. He wears an Indiana Jones hat, a fitted tweed overcoat, woolen gloves and a white bandanna around his neck.

"But when you look closely," Frank says, "you see it's a restaurant dinner napkin."

Sir Leonard was homeless, destitute. Yet for this 1990 picture, he presents himself with style and flair.

Another wall has one of the most famous faces in the world — supermodel Kate Moss. For years Moss has defined glamour and beauty on the pages of glossy fashion magazines. But in artist Chuck Close's extreme close-up, she looks like a girl in a dusty little Texas town, maybe walking along a railroad track.

Portraits Of The People Who Drive Richmond, Va.

For Working-Class Chinese, 'Picture Day' Is A Rare Treat

"[There's] no makeup on this woman," Frank says. "Her hair appears unkempt; she stares out at us blankly."

There are wrinkles under Moss' blank eyes, and her skin is a confetti of freckles and pores — no airbrushing to be seen. Moss and Close knew each other, and she trusted him. She had even posed nude for him over the course of various photo shoots.

Years ago, photographer Richard Avedon said portrait photography was an exercise in "unearned intimacy," with subject and photographer connecting intensely in a brief period of time. But in Close's portrait of Moss, the intimacy has been earned over years.

Portrait Of An Artist As A Young Woman

Frida Kahlo is another of the exhibit's female icons. Imogen Cunningham shot the Mexican painter in 1931, when Kahlo was 24. Her husband, Diego Rivera, a legend in his day, brought her with him when he came to paint murals in California.

The young Kahlo is fresh and sweet — she hasn't fully grown into the pain and suffering that will etch her face for life. She's wearing her great, artistic clothes — big beads, big earrings — and her eyebrows are not yet fully grown together in the middle. The photo is called Frida Kahlo, Painter and Wife of Diego Rivera.

"This was when she was a young woman known primarily as the wife of a painter [who] had a far larger reputation than her own at the time," Frank says.

It would take another 40 years for Kahlo to be discovered, and celebrated. 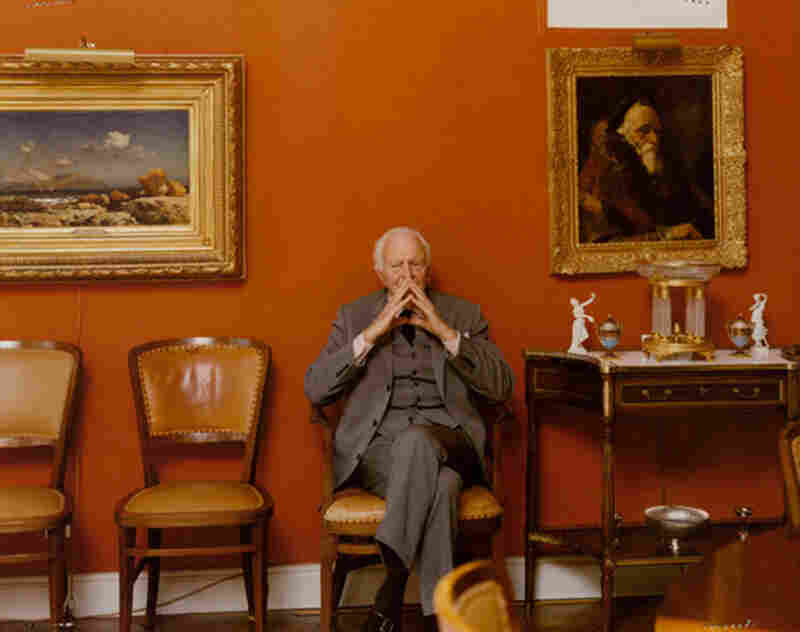 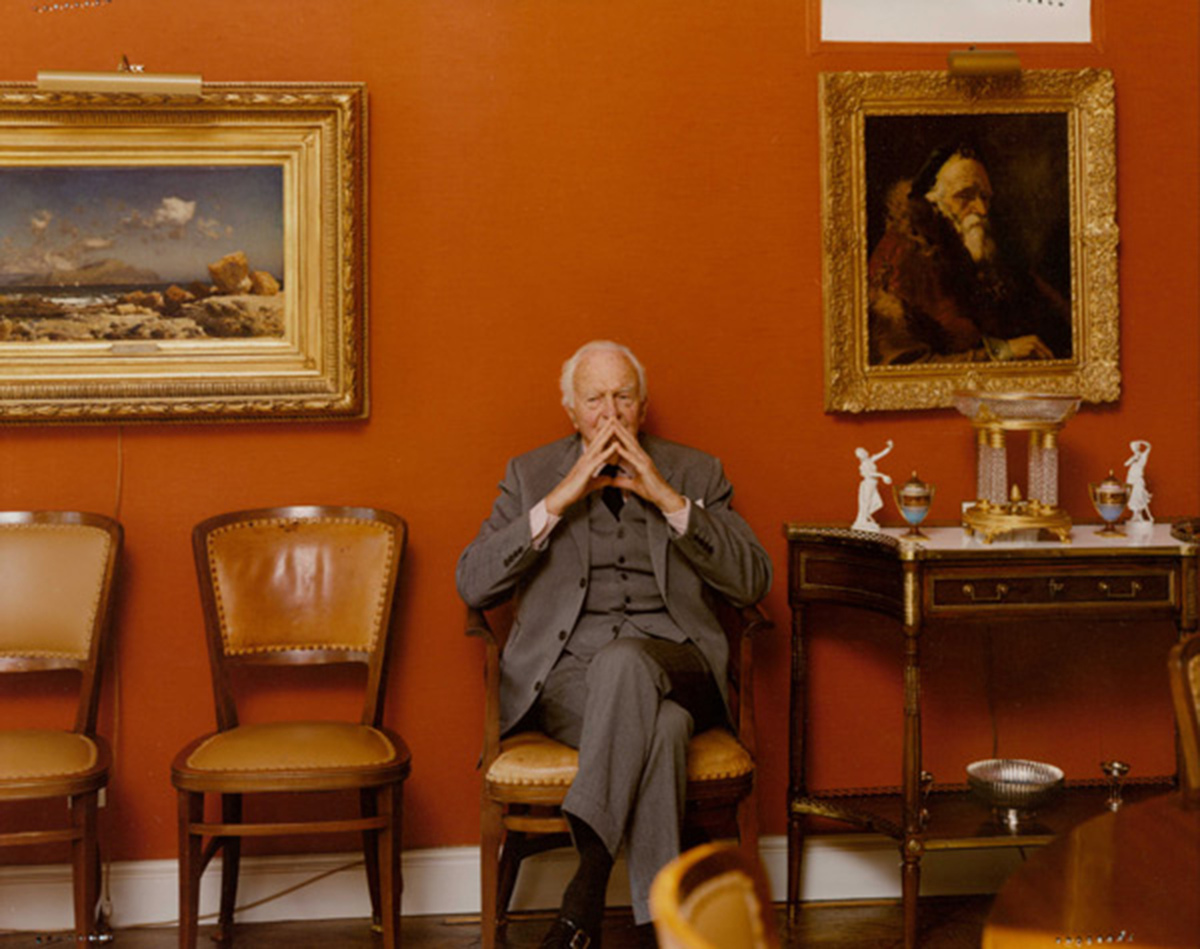 The Orange Room (from "The Europeans") by Tina Barney.

Finally, there's The Orange Room, a portrait that's large and in color. It was taken by Tina Barney — an American, like most of the photographers in the Phillips show — part of a 1995 series in which Barney photographed aristocrats in their homes. It was called "The Europeans."

The Orange Room is a portrait of nondisclosure — or is it? The subject is an elderly gentleman, and we're not told his name. He wears a three-piece gray suit, has white hair and is balding. He sits against an orange wall in an armchair, elbows on the arms. On the wall, there's a small, old painting that could be a saint, and another painting showing a seascape.

On a fine antique console nearby, there are various objects (when they're expensive, you say objets): porcelain figures, a glass and gold bowl, other fancy tchotchkes. They're on display, but he is not. Mr. X tents his hands in front of his face so we can't see his mouth

"He has put this barrier between Tina Barney, the photographer, and himself ... so that we can't really see who he is," Frank says. " ... I think that what [Barney] was fascinated by was how people responded to her presence that didn't really know her. He's guarding his inner person very carefully."

We see him guarded, hiding, and we wonder if he's allowing himself to be defined by his things instead of his self. Or is that his self?

It's really fascinating: What do we choose to reveal in a photo portrait? What do we hide? And what do our wide, sunny smiles conceal in the pictures we take and pose for with family and friends?