Accessibility links
Astronaut Chris Hadfield Brings Lessons From Space Down To Earth The former International Space Station commander achieved Internet stardom with his in-space rendition of David Bowie's "Space Oddity." After three missions and a total of six months in space he shares what he's learned in a book, An Astronaut's Guide to Life on Earth.

This interview was originally broadcast on Oct. 30, 2013. 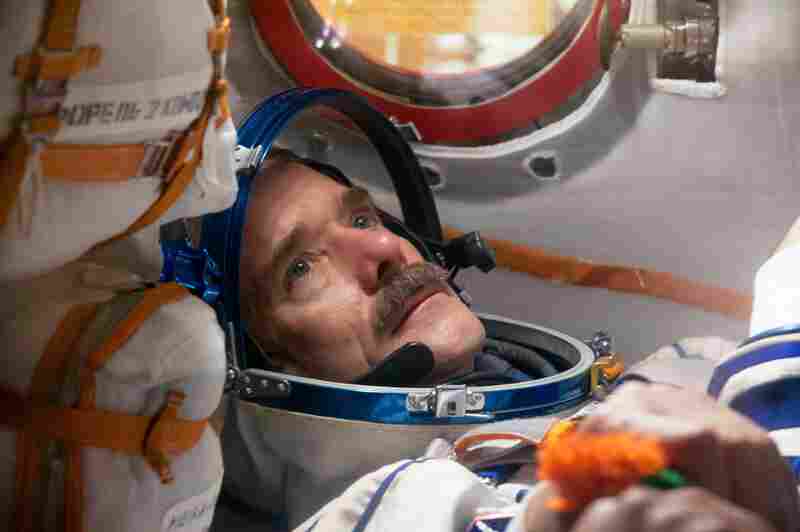 Canadian astronaut Chris Hadfield has spent a total of six months in space. In his new book, he writes that getting to space took only "8 minutes and 42 seconds. Give or take a few thousand days of training." NASA/Courtesy of Little, Brown and Company hide caption 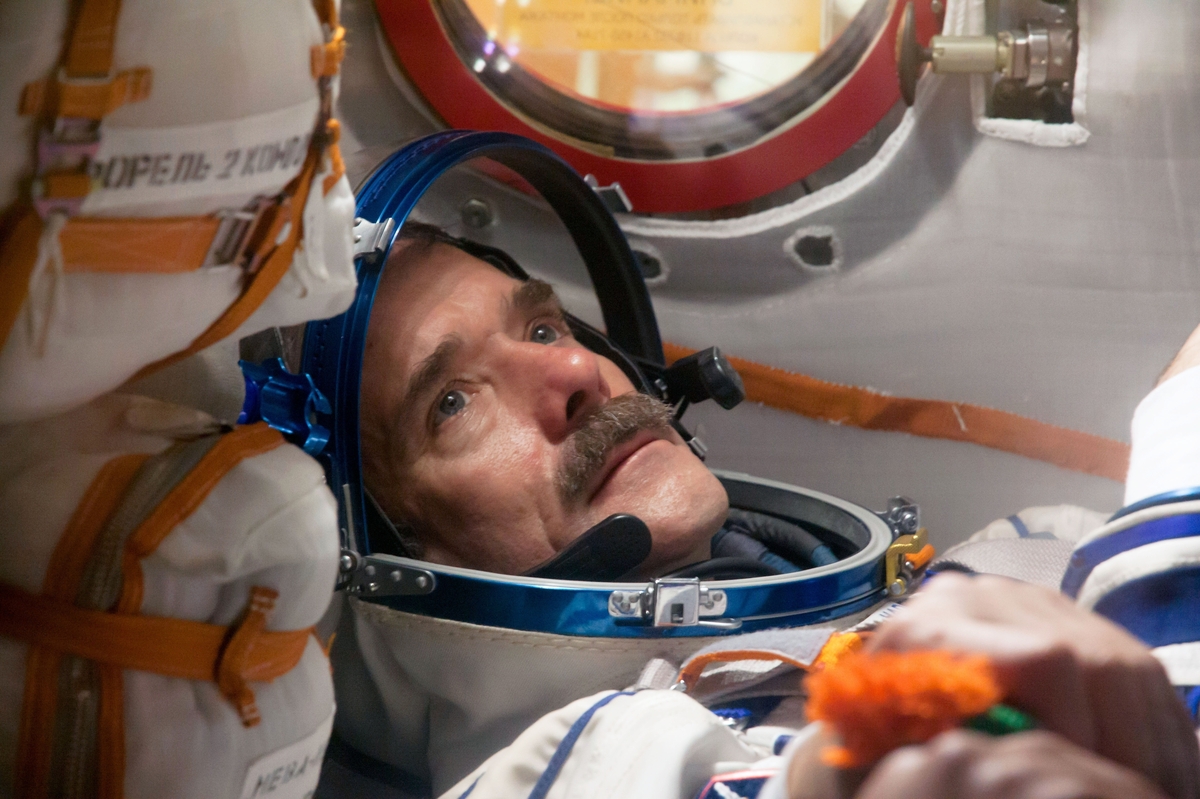 Canadian astronaut Chris Hadfield has spent a total of six months in space. In his new book, he writes that getting to space took only "8 minutes and 42 seconds. Give or take a few thousand days of training."

NASA/Courtesy of Little, Brown and Company

While floating weightless in the International Space Station last spring, Commander Chris Hadfield recorded his own version of David Bowie's "Space Oddity" — a video that's now been viewed more than 18 million times on YouTube. But when he wasn't busy being an Internet phenomenon, the Canadian astronaut was witnessing awe-inspiring beauty, facing life-threatening dangers and, at times, holding onto a spaceship orbiting Earth at 17,500 miles an hour.

Hadfield has flown three space missions, conducted two space walks and spent a total of six months in space. On Earth, he's been the chief of international space station operations in Houston and chief CAPCOM commander — the person at mission control who communicates directly with astronauts in orbit. In his book, An Astronaut's Guide to Life on Earth, he shares some of the lessons he learned in space.

"There are no wishy-washy astronauts," Hadfield tells Fresh Air's Terry Gross. "You don't get up there by being uncaring and blase. And whatever gave you the sense of tenacity and purpose to get that far in life is absolutely reaffirmed and deepened by the experience itself."

I've been so lucky to have done two spacewalks. If you looked at your wristwatch I was outside for about 15 hours, which is about 10 times around the world. ...

The contrast of your body and your mind inside ... essentially a one-person spaceship, which is your spacesuit, where you're holding on for dear life to the shuttle or the station with one hand, and you are inexplicably in between what is just a pouring glory of the world roaring by, silently next to you — just the kaleidoscope of it, it takes up your whole mind. It's like the most beautiful thing you've ever seen just screaming at you on the right side, and when you look left, it's the whole bottomless black of the universe and it goes in all directions. It's like a huge yawning endlessness on your left side and you're in between those two things and trying to rationalize it to yourself and trying to get some work done. 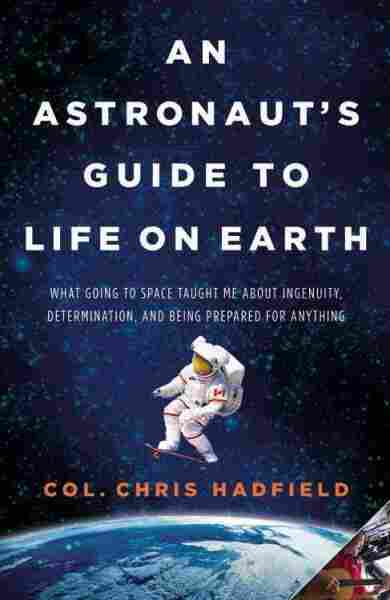 An Astronaut's Guide to Life on Earth

On doing a spacewalk amid Southern Lights

I was coming across the Indian Ocean in the dark. I was riding on the end of the robot arm ... [and] I thought, "I want to look at Australia in the dark," because everyone lives along the coast, starting with Perth and across and it's like a necklace of cities. So I shut off my lights, and I let my eyes completely adjust to the darkness, but as we came south under Australia instead of seeing just the lights of the cities of Australia we flew into the Southern Lights. Just like the Northern Lights they erupt out of the world and it's almost as if someone has put on this huge fantastic laser light show for thousands of miles. The colors, of course, with your naked eye are so much more vivid than just a camera. There are greens and reds and yellows and oranges and they poured up under my feet, just the ribbons and curtains of it — it was surreal to look at, driving through the Southern Lights. ...

To me it was taking time to notice something that is almost always there but that if you didn't purposefully seek it out you would miss — and that is our planet and how it reacts with the energy from the sun and how our magnetic field works and how the upper atmosphere works — what it really is, is just beauty.

They don't want claustrophobic astronauts, so NASA is careful through selection to try to see if you have a natural tendency to be afraid of small spaces or not. Really, it's good if you've managed to find a way to deal with all of your fears, especially the irrational ones. So during selection in fact, they zip you inside a ball, and they don't tell you how long they're going to leave you in there. I think if you had tendencies toward claustrophobia then that would probably panic you and they would use that as a discriminator to decide whether they were going to hire you or not. For me, being zipped inside a small, dark place for an indeterminate amount of time was just a great opportunity and nice time to think and maybe have a little nap and relax, so it doesn't bother me. But you can get claustrophobia and agoraphobia — a fear of wide open spaces — simultaneously on a spacewalk.

On coping with moments of fear and panic in space

Half of the risk of a six-month flight is in the first nine minutes, so as a crew, how do you stay focused? How do you not get paralyzed by the fear of it? The way we do it is to break down: What are the risks? And a nice way to keep reminding yourself is: What's the next thing that's going to kill me? And it might be five seconds away, it might be an inadvertent engine shutdown, or it might be staging of the solid rockets coming off. ... We don't just live with that, though. The thing that is really useful, I think out of all of this, is we dig into it so deeply and we look at, "OK, so this might kill us, this is something that would normally panic us, let's get ready, let's think about it." And we go into every excruciating detail of why that might affect what we're doing and what we can do to resolve it and have a plan, and be comfortable with it. ...

It's not like astronauts are braver than other people; we're just meticulously prepared.

It's not like astronauts are braver than other people; we're just meticulously prepared. We dissect what it is that's going to scare us, and what it is that is a threat to us and then we practice over and over again so that the natural irrational fear is neutralized.

On losing orientation in space with no sense of "up"

What does it feel like when you close your eyes when you're weightless? Normally on Earth when you close your eyes you can feel your feet on the floor or your rear end on your chair or something and that gives you a sense of up. You can balance with your eyes closed, you can walk with your eyes closed because of all of the external references. When you're weightless and you close your eyes it's as if you just stepped off a cliff into complete blackness and you're falling forever, so the perception of that is really odd. You can do it as like a thought experiment and instead of closing your eyes and thinking that you're just floating, close your eyes and picture that you've just stepped off the Half Dome in Yosemite and are now falling into the blackness, and it's interesting to see how your body reacts to it.

How Astronauts Fill Their Space With Music

I'd already been an astronaut for a decade when the crew of Columbia was killed. ... Rick Husband and I were out at Edwards at test pilot school together. He was the commander of Columbia ... I knew everybody onboard and I was very close with Rick. So it was an awful thing to go through ... they die so publicly.

... It's redoubled my efforts to try and do this job right in the future and to try and convince everybody that we can solve problems like this and we can be smart and brave enough to take those risks again. And to our credit, it took years, but we made significant changes in a lot of the way we did business.

We flew out the rest of the entire space shuttle program without hurting anybody else. We finished building the space station and we've learned so much about how to safely fly in space as a result of those guys losing their lives. So yeah, it's not a risk-free business when you want to try something hard and new, when you want to explore someplace you haven't been before.

On space travel and faith

The big pervasive feeling onboard looking at the Earth [from space] is one of tremendous exquisite privilege that it exists. ... But I think what everyone would find if they could be in that position — if they could see the whole world every 90 minutes and look down on the places where we do things right, and look down where we're doing stupid, brutal things to each other and the inevitable patience of the world that houses us — I think everybody would be reinforced in their faith, and maybe readdress the real true tenets of what's good and what gives them strength.

Read an excerpt of An Astronaut's Guide to Life on Earth