Accessibility links
Marines: Most Female Recruits Don't Meet New Pullup Standard Women are supposed to do three pullups, part of the new physical test intended to determine whether women are ready for ground combat. The pullup test has been put on hold because most female recruits have been unable to meet the standard. 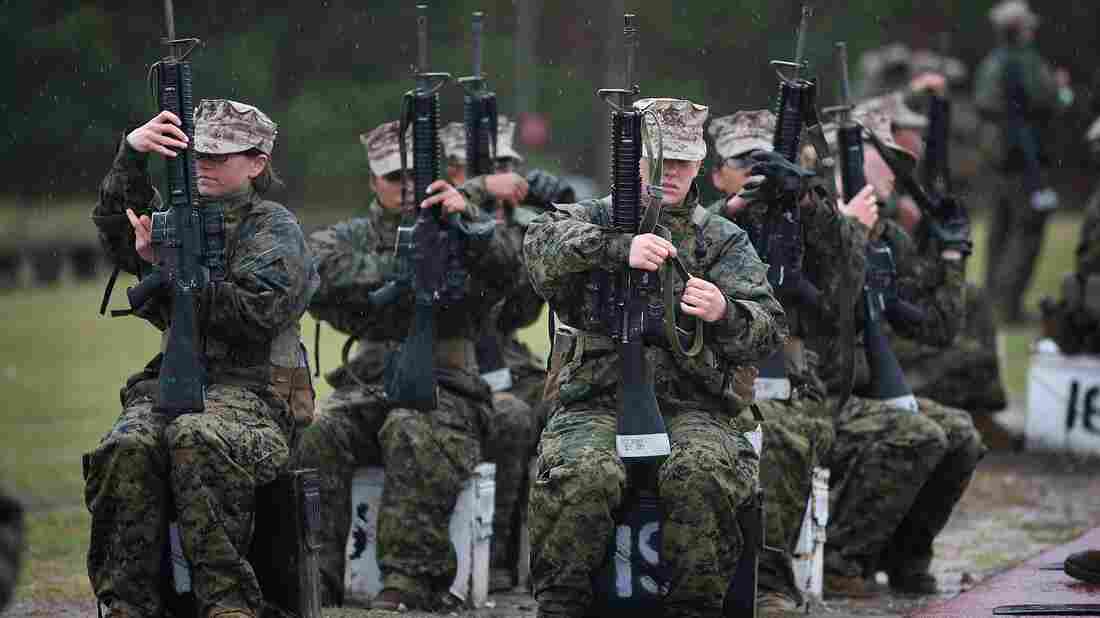 Female Marine recruits train on the rifle range during boot camp at Parris Island, S.C., on Feb. 25. The Marine Corps said it has postponed new physical standards that would require women to do three pullups, noting that many female recruits were not yet able to do so. Scott Olson/Getty Images hide caption 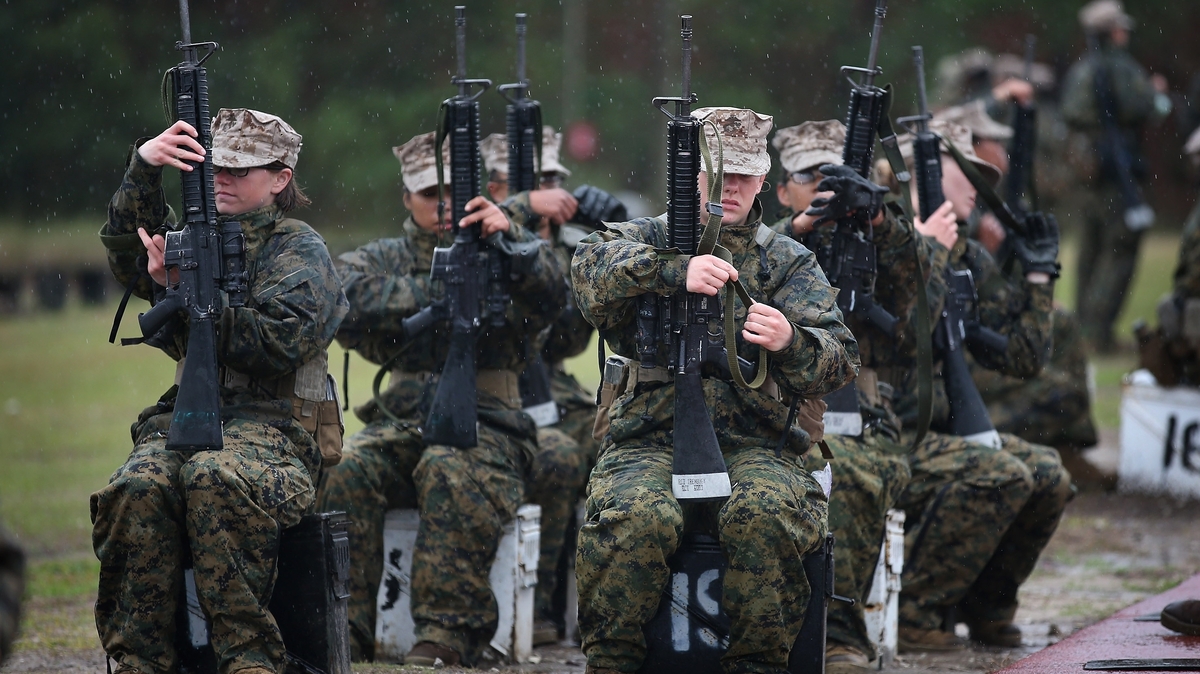 Female Marine recruits train on the rifle range during boot camp at Parris Island, S.C., on Feb. 25. The Marine Corps said it has postponed new physical standards that would require women to do three pullups, noting that many female recruits were not yet able to do so.

Starting Jan. 1, every woman in the Marines Corps was supposed to meet a new physical standard by performing three pullups. But that has been put off.

The Marine Corps announced it quietly. There was no news conference — just a notice on its social media sites and an item on its own TV show, The Corps Report.

Lance Cpl. Ally Beiswanger explained that the pullup test had been put off until sometime next year, to gather more data and "ensure all female Marines are given the best opportunity to succeed."

So far, female Marines are not succeeding. Fifty-five percent of female recruits tested at the end of boot camp were doing fewer than three pullups; only 1 percent of male recruits failed the test.

The three pullups is already the minimum required for all male Marines. Now the Marine Corps has postponed the plan, and that's raising questions about whether women have the physical strength to handle ground combat, which they'll be allowed to do beginning in 2016.

Marine officers would not talk to NPR on tape. They said they delayed the pullup requirement to avoid losing not only recruits but also current female Marines who can't pass the test.

The Marine Corps has been using it to test upper body strength for men for more than 40 years. And that upper body strength, they say, is necessary to serve in ground combat: to pull yourself out of a canal in Afghanistan, to climb over a mud wall, to carry an ammunition box.

For years, female Marines have had to meet a different standard — an exercise called the "flexed arm hang" (holding one's chin above the pullup bar for at least 15 seconds).

But beginning in 2016, women in the Marine Corps and Army will be allowed to serve in infantry, armor and artillery units. And they'll need to be strong enough to climb those mud walls and carry ammunition.

Maginnis just wrote a book called Deadly Consequences: How Cowards are Pushing Women into Combat. He says the issue has more to do with politics than protecting the nation.

A Former Marine Says It's Possible

However, Greg Jacob, a former Marine, says women can build the strength they need for pullups, and he has seen it done.

He served as a Marine infantry officer in the Balkans and Africa, and now he works for the Service Women's Action Network, a group that advocates for military women. When he was a Marine trainer in North Carolina, he required his female instructors to knock out pullups just like the guys.

Within six months, all of the women in his company were doing eight to 12 pullups, he says.

Jacob says the Marine Corps must do a better job of training women to reach the same standard as men. A small number of female Marines already have made it: So far, 13 women have passed advanced combat training. One of the requirements is three pullups.

"It's a squad-sized unit that's ready to go, and they're not sending them to their infantry unit simply because they're women," Jacob says.

Some Marine officers privately say only a handful of Marine women will show interest in combat or be able to pass the course.

Meantime, Corps Report TV anchor Lance Cpl. Ally Beiswanger wants to see if she can get over the first physical hurdle and do those pullups.

She admitted to her audience that she could only do one pullup last year.

"Now I'm up to eight, so I'm taking advantage of the extra time to complete my goal of 12 pullups," she said on the show.

And what about the larger goal of women in ground combat? That's still two years away.