Accessibility links
'Havisham' Offers A Peek Behind That Decaying Wedding Veil Miss Havisham is one of Charles Dickens' most enduring characters. She appears in Great Expectations as an eccentric recluse, jilted at the altar years ago, who still wears her wedding gown and presides over a rotting feast. In his new novel, Ronald Frame imagines the kind of life that would have created such a woman. 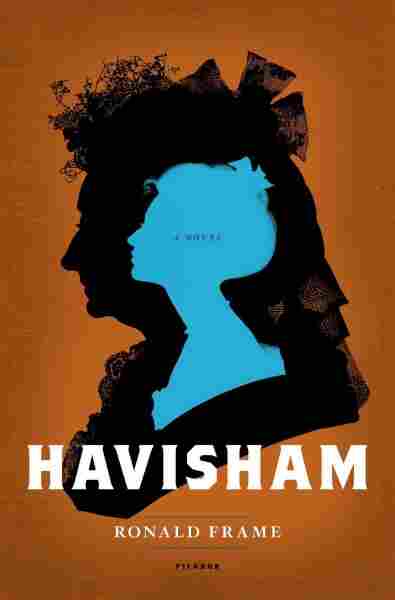 The enigmatic Miss Havisham has haunted the popular imagination for more than 150 years. She appeared in Great Expectations, one of Charles Dickens' best-loved novels: It's been read widely since its publication, and was made into several immensely popular movies.

Havisham is a ghastly, aging bride in a tattered dress and veil: Cruelly abandoned on her wedding day years ago, she still presides over her wedding feast, now rotted and covered with cobwebs. Dickens' protagonist, Pip, is fascinated by Miss Havisham and, particularly, by her lovely ward Estella.

But author Ronald Frame is less interested in Pip's adventures and more intrigued by the story of the prematurely aged woman behind that veil. His new book, Havisham, is something between an autobiography and a novel. In it, Havisham gets a first name — Catherine — and a fully realized story of her own.

Frame tells NPR's Linda Wertheimer about the practicalities of wearing the same dress for decades, Havisham's unique relationship with Pip, and the influence of classic literature on her character.

I was introduced a long time ago, not through the book but ... through the film: David Lean's wonderful 1946 black-and-white creation of that world. Many years later, probably, I came to the novel. And Dickens had inserted into his narrative something which, curiously enough, many people forget about, which is a back story for Miss Havisham. And it seemed to have a sort of richness and a particularity, which suggested that Dickens had thought about it very carefully.

On a scene in the book, straight from Dickens, in which Miss Havisham tells Pip to walk her around the room

It's simply a case of a degree of physical intimacy between the two of them as they walk round and round the dining table, which contains the remnants of the breakfast feast ... which hasn't been touched in the many years since, so that spiders and mice scurry about the table, and it's covered with cobwebs.

It's a complicated picture in the book because, as I said, we know that she's a recluse — on the other hand, the house seems to be filled with relatives, with people that she knows who come to her, usually asking for money, and she has a kind of Brahmin-like demeanor with them — she clicks her fingers and they all jump. And yet this is a completely different kind of relationship, and it's one that she doesn't actually have with Estella either. It's a much pricklier one with her ward, whereas with Pip, she's able to say things that we discover she can't say to anybody else.

On Catherine Havisham's education and her references to literature

I think if you study people in the street today, you do sometimes feel that they have taken their behavior and their language from things that they have seen rather than read — from soap operas and movies and so on. And I was conscious also that probably things, well, they were different and they weren't so different in Miss Havisham's time. And this idea of how do you take your inspiration, how do you know how to behave ... it seemed to me that it came from studying the classics, from music, from lyrics of songs, from poetry. And you are struck by the fact that while they did without all the kind of Internet accessibility that we have and time-saving gadgets, actually how very full their lives were, and how much reading they did, and the breadth — but also the depth — of allusion that they were capable of, that they took from their education. It's humbling.

I think there were two reasons. One is simply the business of personal hygiene, and it was a basic question that you had — you know, if this was the only dress that she had, how close could one physically come to her? The other thing which quite appealed to me was I wanted to show a woman whose intelligence was rather underestimated. I think she's got a very wry appraisal of her own position, and she sees quite clearly what other people think about her. And all these petitioners who come to the house, very few of them go away satisfied, and then she realizes this, and yet she kind of keeps them at the end of a rope and has some fun with them.

On whether he felt affection for Miss Havisham

If not affection, understanding of the character, yes. And, well, as [Gustave] Flaubert said of Madame Bovary, "C'est moi" — I think it's so much a part of you. You have lived with this person for days and weeks and months and, in this case, years on end. I was sorry to leave her, let's put it like that.

Read an excerpt of Havisham