Accessibility links
The Online Education Revolution Drifts Off Course In 2012, "massive open online courses" were lauded as the most important trend in higher education. But this year, educators and even students rebelled against the rapid expansion of online learning. Two of the biggest MOOCs say they're making big changes in how they deliver their classes in 2014. 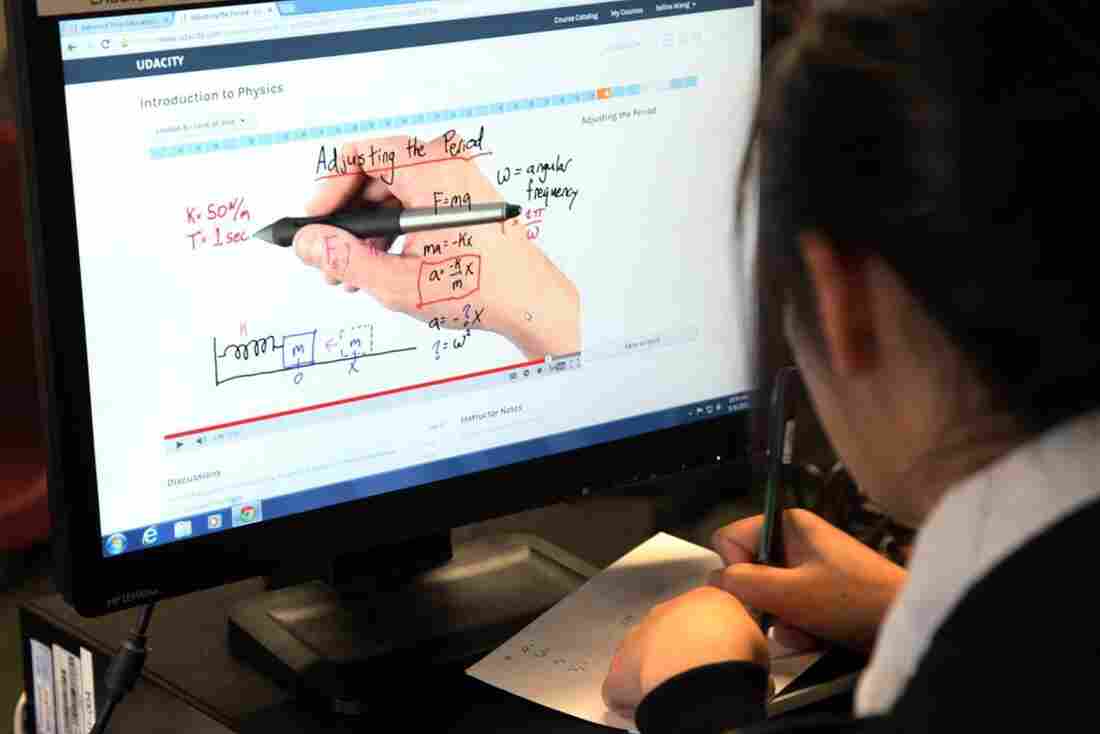 Students at the Oakland Military Institute took several courses offered by San Jose State and the online course provider Udacity this year. The university is now scaling back its relationship with Udacity. Laura A. Oda/MCT/Landov hide caption 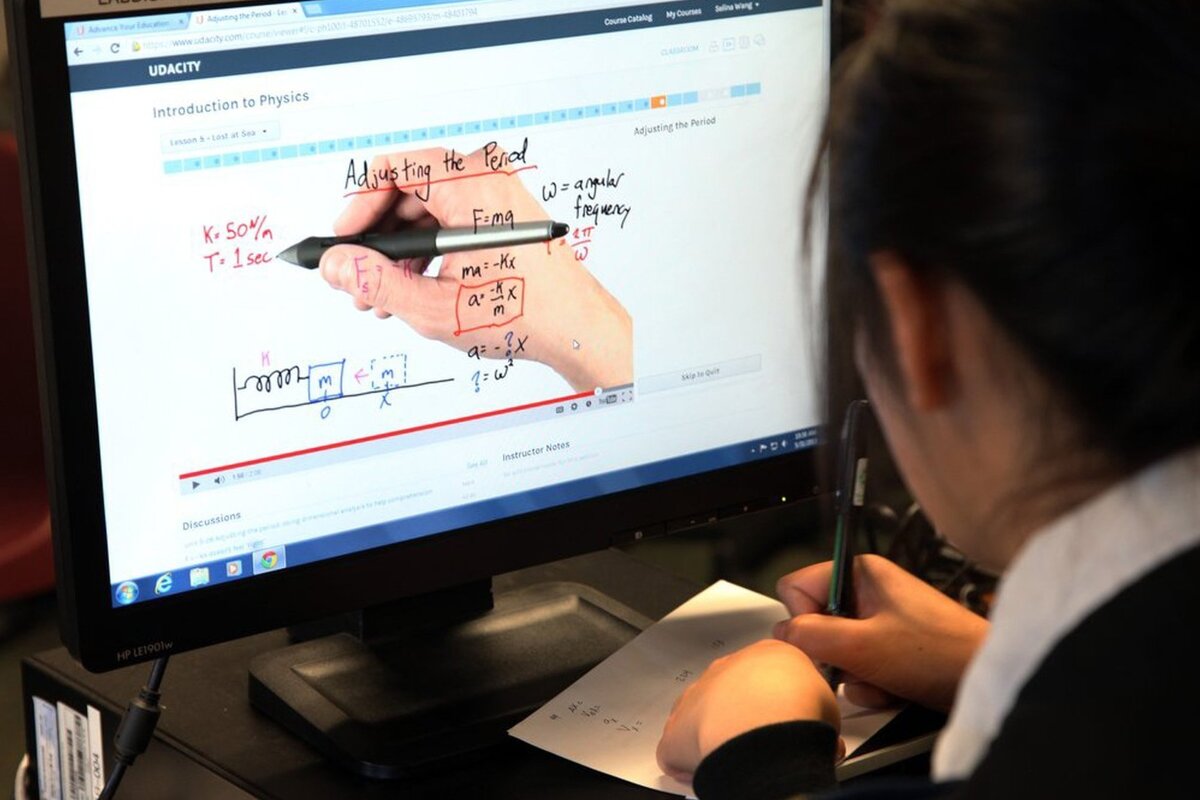 Students at the Oakland Military Institute took several courses offered by San Jose State and the online course provider Udacity this year. The university is now scaling back its relationship with Udacity.

One year ago, many were pointing to the growth of massive open online courses, or MOOCs, as the most important trend in higher education. Many saw the rapid expansion of MOOCs as a higher education revolution that would help address two long-vexing problems: access for underserved students and cost.

In theory, students saddled by rising debt and unable to tap into the best schools would be able to take free classes from rock star professors at elite schools via Udacity, edX, Coursera and other MOOC platforms.

But if 2012 was the "Year of the MOOC," as The New York Times famously called it, 2013 might be dubbed the year that online education fell back to earth. Faculty at several institutions rebelled against the rapid expansion of online learning — and the nation's largest MOOC providers are responding.

Earlier this year, San Jose State University partnered with Udacity to offer several types of for-credit MOOC classes at low cost. The partnership was announced in January with lots of enthusiastic publicity, including a plug from California Gov. Jerry Brown, who said MOOC experiments are central to democratizing education.

"We've got to invest in learning, in teaching, in education," he said. "And we do that not by just the way we did it 100 years ago. We keep changing."

We look back at our early work and realize it wasn't quite as good as it should have been. We had so many moments for improvement.

But by all accounts, the San Jose experiment was a bust. Completion rates and grades were worse than for those who took traditional campus-style classes. And the students who did best weren't the underserved students San Jose most wanted to reach.

It wasn't really proving to be cheaper, either, says Peter Hadreas, the chairman of San Jose State's philosophy department.

"The people that do well in these kind of courses are people who are already studious. Or ... who are taking courses for their own enrichment after they've graduated," he says.

"A year and a half ago ... people thought this was going to solve the problems of higher education because people would be educated for less money. That's not the way it's worked out."

Now, San Jose State is scaling back its relationship with Udacity, taking more direct control of the courses it offers through the company and rethinking its commitment to MOOCs.

'We Have A Lousy Product'

Other schools are hitting the pause button as well. A recent University of Pennsylvania study confirmed a massive problem: MOOCs have painfully few active users. About half who registered for a class ever viewed a lecture, and completion rates averaged just 4 percent across all courses.

Sebastian Thrun, Udacity's co-founder and a prime mover in MOOCs, recently told Fast Company magazine, "We were on the front pages of newspapers and magazines, and at the same time, I was realizing, we don't educate people as others wished, or as I wished. We have a lousy product."

Thrun says he doesn't regret that position. "I think that's just honest, and I think we should have an honest discourse about what we do," he says.

"Online education that leaves almost everybody behind except for highly motivated students, to me, can't be a viable path to education. We look back at our early work and realize it wasn't quite as good as it should have been. We had so many moments for improvement."

That the former Stanford professor and inventor — whose online artificial intelligence course helped kick off the MOOC frenzy — was fundamentally rethinking its viability shook the higher education world.

What was missing, many students complained, was a human connection beyond the streamed lecture.

That's what Tracy Wheeler found lacking. This year she immersed herself in five MOOCs from two providers and completed three, including a course on global poverty. She had read the professor's book and was excited and upbeat.

"I thought I'd go in deeper and come out wanting to move to India and help her with one of her experiments," she says.

Is Massively Open Online Education A Threat Or A Blessing?

Instead, the 52-year-old education consultant says she hated being chained to the computer screen and found the entire MOOC experience mechanistic, dreary and ineffectual.

"I'm a very social person. There was nothing to grasp on to," she says. "There were no people; there was no professor. In a sense you're just learning in this void. ... I would come away from my computer just kind of despondent and feeling really reduced somehow."

She says the courses' online forums — the key support structure for many MOOCs — were isolating and largely absent of meaningful back-and-forth — or joy.

"It was like going up and scrawling your name on a graffiti wall. You know, there was no sense of community." In a class, she says, "you can pass a note. You can have fun."

A Bigger Human Element Ahead

Wheeler's experience is just one of hundreds of thousands of MOOC takers', of course. Many others praise the online courses as brilliant, time-saving and cost efficient. But providers are responding to criticisms like Wheeler's.

Enter MOOC 2.0. Udacity and other leading MOOC providers now realize that a more expansive, human-centered support structure is key to helping students retain information, stick with the course — and finish.

"We [added] human mentors," says Thrun. "We have people almost 24-7 that help you when you get stuck. We also added a lot of projects that require human feedback and human grading.

"And that human element, surprise, surprise, makes a huge difference in the student experience and the learning outcomes," he says.

In 2014, the company will put more emphasis on employee job training classes for corporations, including Google, Facebook and others. Classes will include an introduction to big data analysis and mobile app development.

Like Udacity, MOOC pioneer Coursera is also changing. The company is creating "learning hubs" at U.S. consulates around the world that will include a weekly in-person instructor to foster discussion.

Some critics believe the changes underway amount to a full-scale MOOC retreat and lay bare online education's deep flaws. But Thrun says those critics simply don't get the nature of tech innovation: You closely evaluate failures, think forward, adjust — and use the word "iterate." A lot.

"It's certainly an iteration," Thrun says. "And the truth is, look, this is Silicon Valley. We try things out, we look at the data, and we learn from it."