Accessibility links
Federal Flood Insurance Program Drowning In Debt. Who Will Pay? Congress has tried to boost premiums on the cheap, subsidized insurance FEMA offers. But property owners in flood zones protested the rate hikes, and legislators backed off in 2013, calling for "further study." Meanwhile, a string of bad storms has left the program $24 billion in debt — so far. 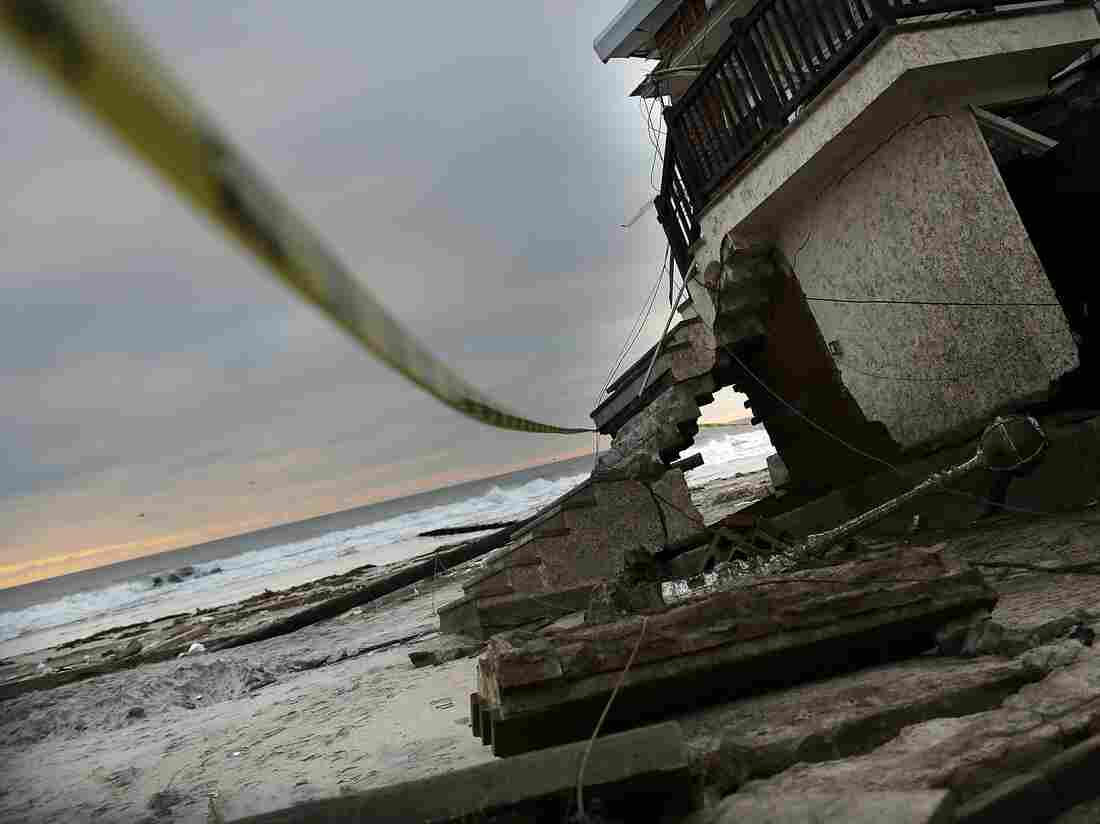 Even when a flood obliterates homes, as Superstorm Sandy did in 2012 in the Rockaway neighborhood of Queens, N.Y., the urge to rebuild can be strong. Spencer Platt/Getty Images hide caption

Millions of American property owners get flood insurance from the federal government, and a lot of them get a hefty discount. But over the past decade, the government has paid out huge amounts of money after floods, and the flood insurance program is deeply in the red.

Congress tried to fix that in 2012 by passing a law to raise insurance premiums. Now that move has created such uproar among property owners that Congress is trying to make the law it passed disappear.

Caught in the middle is the Federal Emergency Management Agency. FEMA provides food, shelter, money and pretty much whatever people need after a disaster. But before a disaster, FEMA helps with flood insurance — cheap flood insurance. You can buy a FEMA flood insurance policy for about half the "actuarial" rate private insurers would offer. (The actuarial rate more accurately reflects the value of a property at risk.)

But now FEMA has a problem. "We are $24 billion in debt," says Craig Fugate, who directs FEMA. Fugate delivered that bit of news to Congress' House Financial Services Committee in Washington, D.C., recently, as he tried to make the case for raising insurance rates.

A string of hurricanes and floods over the past decade has drained FEMA's insurance fund. Meanwhile, people keep rebuilding in flood zones, in part because FEMA offers cut-rate prices on one-fifth of its policies. At the hearing, Fugate made it clear that this is bad policy: "The moral hazard of subsidizing risk is, we're going to rebuild right where we were, just the way it was, and we're going to get wiped out."

The weird thing in this case is that Fugate was trying to convince Congress not to undo what it had just done. The 2012 law Congress passed — the Biggert-Waters Flood Insurance Reform Act — instructed FEMA to charge more realistic insurance rates that are in keeping with the rates private companies would charge. Congress said, in effect, "It's OK to stop subsidizing those policies."

So FEMA did just that. In 2013, it began phasing in higher premiums — mostly for second homes and for properties that have changed hands since then. In some cases, premiums went up by thousands of dollars.

Right away, the phones in Congress started ringing — ringing so much so that Congress called Fugate in to demand a stop to the very law it had passed. Among the most outraged was Maxine Waters — the co-sponsor of the Biggert-Water's Act. At the hearing, Waters described her law as "well-meaning," and then scolded Fugate for not coming to Congress earlier to explain just how high the premium increases would go (though they were specifically called for in the Biggert-Waters Act).

"Let me just say," she told Fugate, "all of the harm that has been caused to thousands of people across the country --[who] are calling us, [who] are going to lose their homes, [who] are placed in this position — is just unconscionable."

Now Waters and other members are calling for a lengthy "affordability study" to see just how high rates might go. They also want FEMA to finish updating its flood maps to see if people who are not in a flood zone now will end up in one.

With National Treasures At Risk, D.C. Fights Against Flooding

FEMA's Fugate told Waters he doesn't think much of this plan. "If we are going to continue to do this," he explained, "if we wait until all the maps are updated, it will indefinitely delay implementation."

"It is buyer's remorse by the lawmakers," says Stephen Ellis, who monitors the ups and downs of flood insurance for a group called Taxpayers for Common Sense. "I mean, they did the right thing," he says. "And then that kind of outraged some of their constituents, who have howled quite loudly, and now they're talking about undoing those reforms."

Ellis says subsidized insurance from FEMA means taxpayers are footing part of the bill for people who choose to live in flood zones. Moreover, he says, artificially low premiums actually encourage people to rebuild where they probably shouldn't.

As Ellis sees it, Congress is saying, in essence, " 'Why didn't you protect us from ourselves? Why didn't you tell us we were doing responsible reforms that were actually going to cost people money and have a bit of pain involved because that's what has to happen?' "

Ellis says the Biggert-Waters act "is the necessary medicine if this [federal flood insurance] program is going to survive." That's a view shared by some conservative and liberal groups who argue that the federal taxpayer is subsidizing too many properties known to be at risk because they are on the coast or otherwise prone to flooding.

There's another way to look at this issue, though — the way Gerald Galloway does. He's an engineering professor at the University of Maryland who studies floods and advises the government on how to deal with them. Yes, Galloway says, there are flood-prone places like Louisiana that suck up a big share of FEMA's flood money.

"But wait a second," he says. "Thirty-five percent of our nation's oil and gas comes from the Gulf Coast, and these people live in some form of risk." Galloway says they need to live there to keep the oil and gas business running.

He favors not raising rates for most homeowners right now — holding off until ways can be devised to cushion the impact of higher rates in places prone to flooding. "Recognize that it is not a flood insurance program," Galloway says. Rather, "it is a program to maintain the viability of communities and their economy."

Meanwhile, Congress has drafted a new bill to delay the Biggert-Waters Act of 2012. Sponsors want to hold off on rate hikes while the National Academy of Sciences spends two years studying the issue. When the NAS is done, Congress would then spend a year or so reviewing that study. Given that the Biggert-Waters Act expires in 2017, that delay could solve Congress' problem with its angry constituents.