Accessibility links
Movie Review - 'Open Grave' - From 'Apollo 18' Director, A Thriller With Plenty Of Open Questions If you didn't wake up in a pit full of corpses today, you're having a better day than the protagonist of Gonzalo Lopez-Gallego's twisty new film — who also can't remember how he ended up in such a regrettable situation. 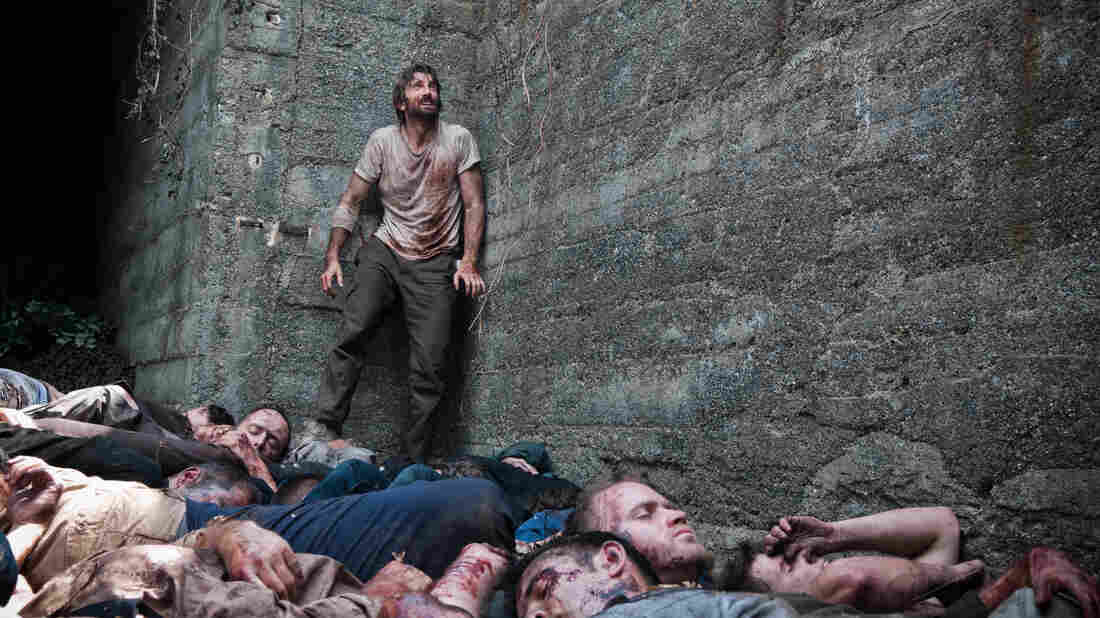 It's never a good sign when a character in a mystery has to give a speech at the end explaining exactly what's just happened. You know, just in case the story itself didn't actually manage to make it clear.

Sure, Hitchcock gets away with it at the end of Psycho, but only because the whodunit portion of that movie isn't the thing that makes it so great. Also, he's Alfred Hitchcock; the masters can get away with breaking some rules, because they can make up others that work just as well.

Spanish director Gonzalo Lopez-Gallego is a skilled stylist, but he's no Hitch. In Open Grave, his second English-language effort after 2011's "found footage" space thriller Apollo 18, he attempts a twisting, turning mystery that ends up being as straightforward as can be. As in a throwaway beach read, the answer to the central mystery is really this thing's only reason for existing — so when that voice-over starts filling in the blanks the movie itself couldn't show, it's a major cheat.

Which is a shame, because as a potentially satisfying, no-frills, nuts-and-bolts thriller, Open Grave has all the elements of a fascinating movie. A group of people wake up at a house in the middle of nowhere, with no memory of who they are or how or why they got there. One of them, John, has it even worse: He comes to outside the house, in a large pit, atop a pile of corpses. 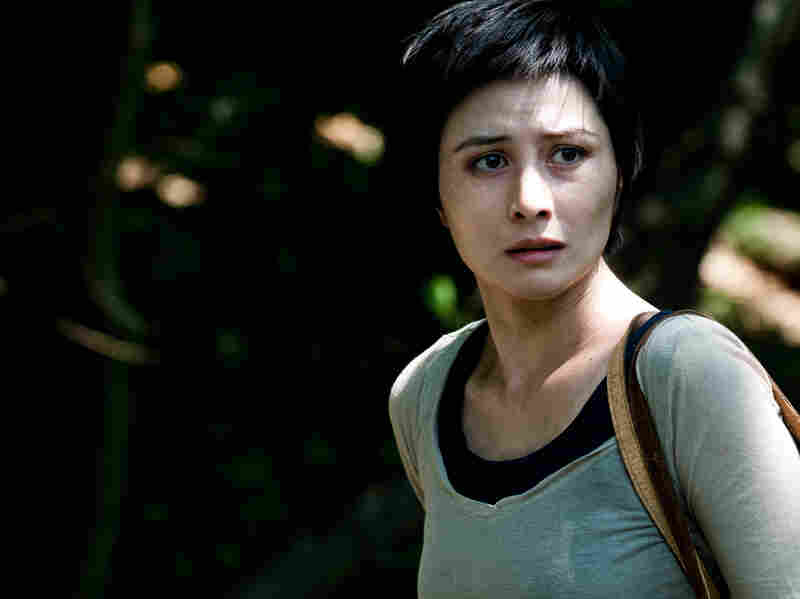 Josie Ho plays a character called Brown Eyes, who's the only one with any memory of what has transpired — but who can't communicate with the others. Vermes Kata/Tribeca Film hide caption 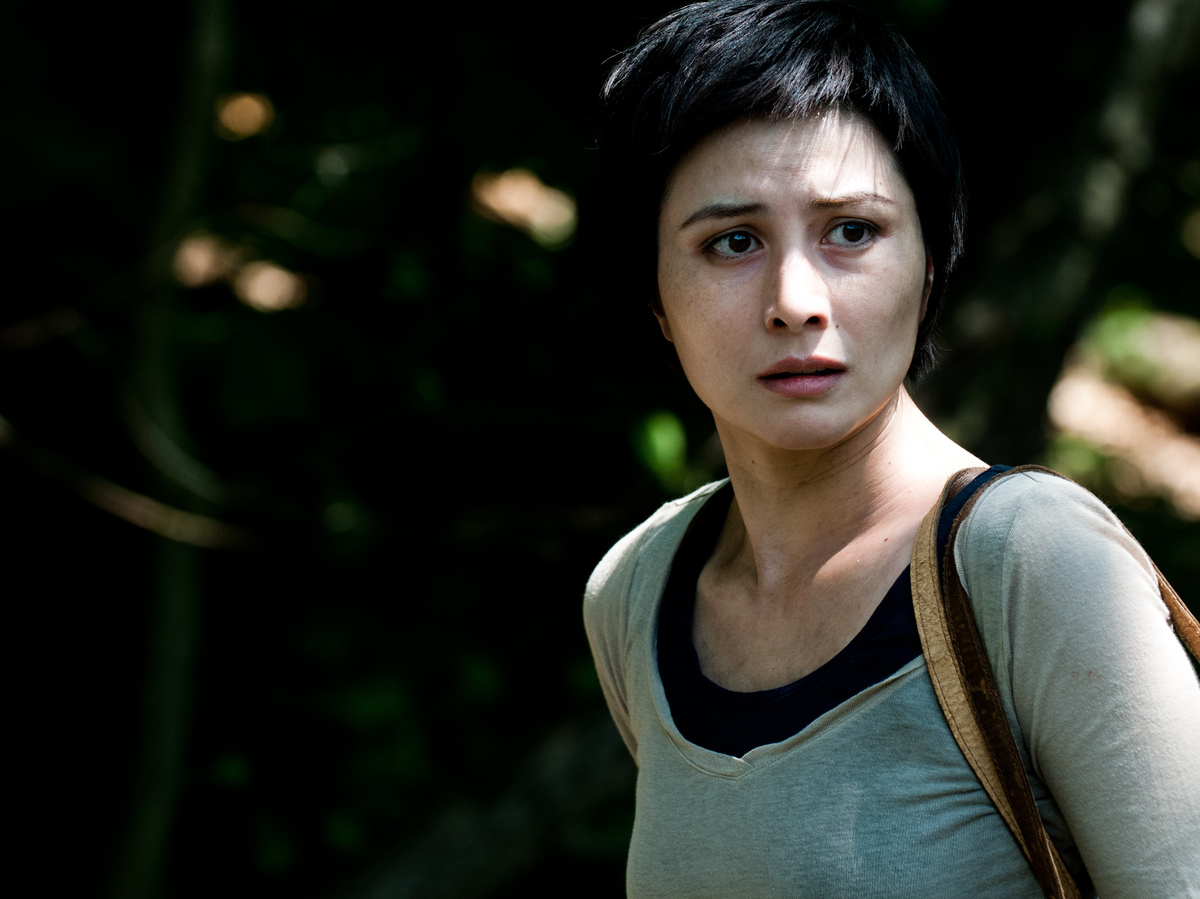 Josie Ho plays a character called Brown Eyes, who's the only one with any memory of what has transpired — but who can't communicate with the others.

This is an immediately inviting puzzle, and Lopez-Gallego continues dropping pieces on the table: Why is it that the only person who seems to have retained her memory, Josie Ho's "Brown Eyes," happens to be mute and unable to communicate in writing? Why is the house stocked like a survivalist's encampment, with a pantry packed with nonperishables and an impressive arsenal of weapons and ammunition? And what is it out in the woods making those terrible screams?

Despite having lost their memories, the members of the group still retain specialized skills and knowledge that they had previously. So Michael (Max Wrottesley) quickly discovers he has advanced proficiency with all the firearms lying around the house. After perusing the extensive library of non-English anatomy texts in the house, Nathan (Joseph Morgan) realizes he speaks a number of foreign languages. Sharon (Erin Richards) seems to have some medical knowledge.

As for John, he's less possessed of specialized skills than he is of crippling flashbacks, often to do with committing violent acts. He wonders if maybe that open pit out back is his — and the suspicious looks from the rest of the group aren't helping.

That probably all sounds great in a pitch meeting, and it works just as well as a hook on-screen. Lopez-Gallego obviously knows exactly where he wants all these threads to come together in the end as well. The problem is in getting the audience there.

Apart from John and Brown Eyes, the script, by brothers Eddie and Chris Borey, doesn't give the rest of the group much more depth than the malevolent beings out in the woods; mostly, it restricts them to distrustful glowering or all-out panic. Copley is fine if unremarkable in the lead; he keeps things restrained, which is a better place for the actor than the hammy gesturing of his two 2013 clunkers, Elysium and Oldboy. But the movie might sink entirely without Ho's wordless performance as her Brown Eyes desperately tries to improvise communication.

The biggest problem is that Lopez-Gallego and the Boreys are so fixated on throwing out more and more clues — whether in the timeline of the movie or in the hackneyed, heavily filtered flashbacks that John keeps experiencing — that tying them all together becomes an afterthought. The film's aura of mystery only works in the first 20 minutes or so, when it seems effortless; after that it feels like it's working very hard to keep the truth obscured, and in so doing just becomes a colorless slog.

When things are finally explained at the end, you'll wonder whether it's because Lopez-Gallego was worried his storytelling wasn't clear enough or he was concerned your attention may have wandered. I'm going with both.