Accessibility links
Berlin Clinic Aims To Make Genital Cutting Survivors Feel Whole The new Desert Flower Center offers treatment for the physical and psychological effects of female genital mutilation. But fear of alienation from their families and communities may keep some victims, mainly immigrants from Africa, from taking advantage of the center. 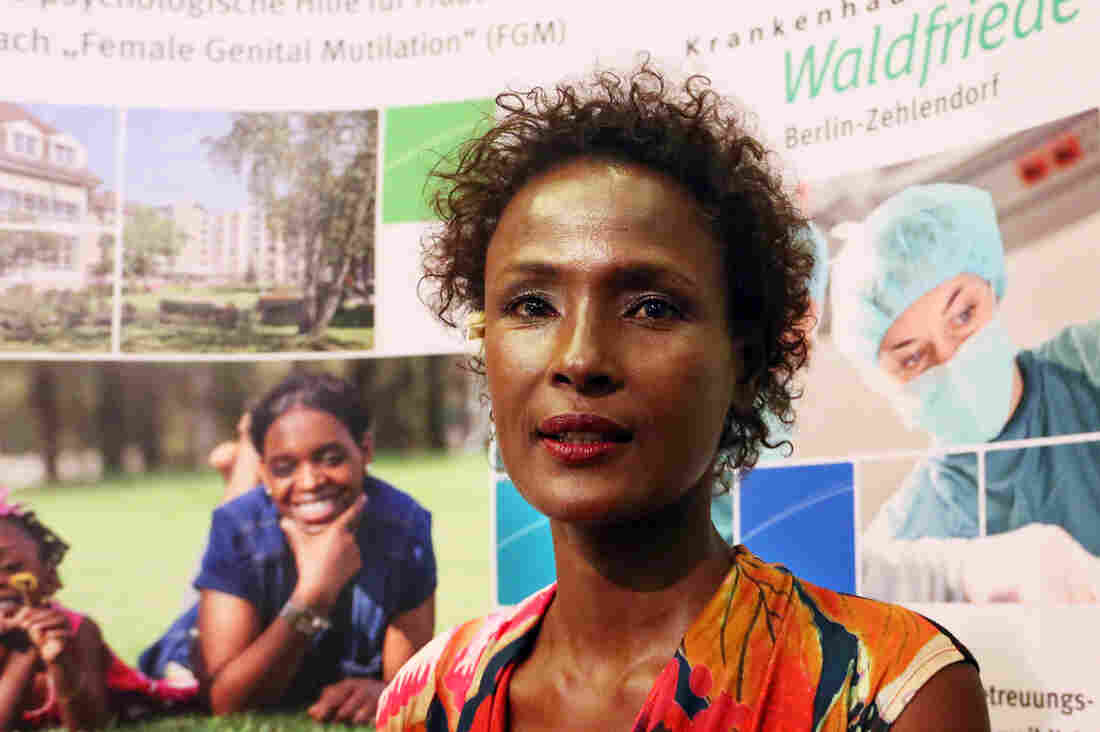 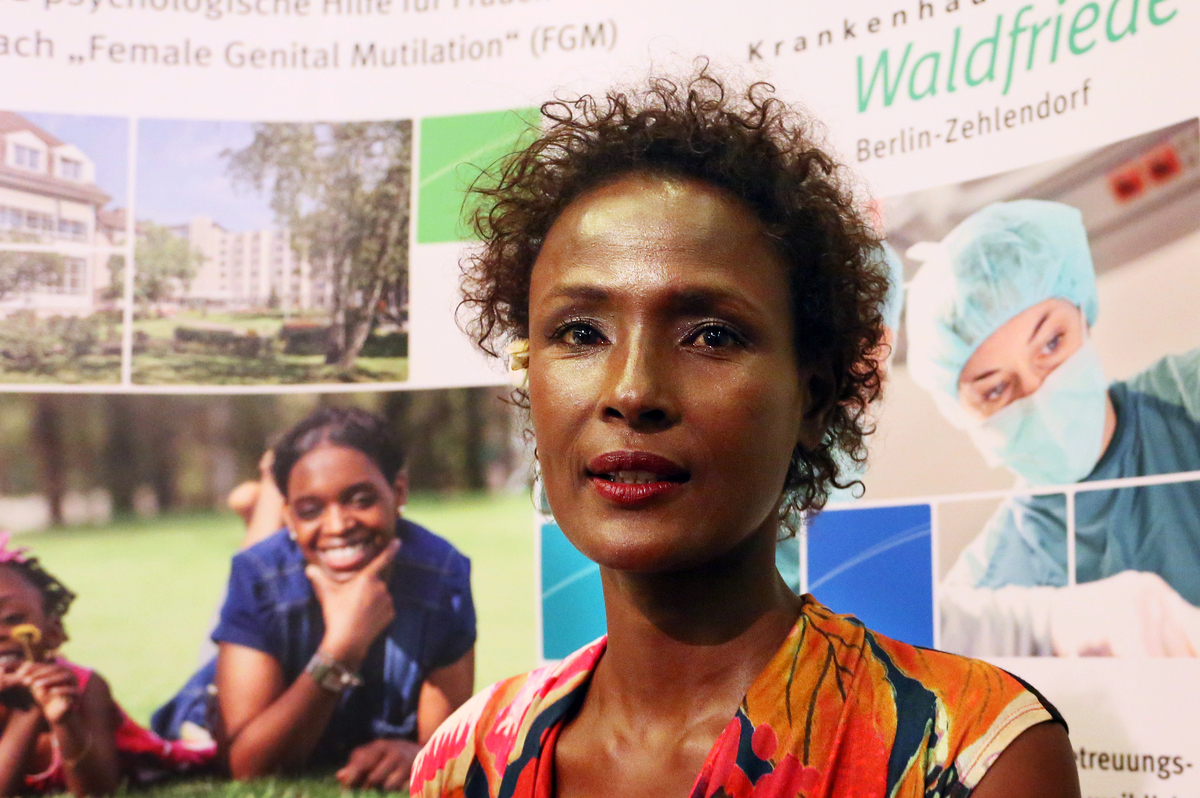 At a recent sewing class held in Berlin at Mama Afrika, which helps immigrants adjust to life in Germany, most of the African and Middle Eastern students feign ignorance when founder Hadja Kaba asks them about female genital mutilation.

Turning to one young woman wearing a veil she asks, "Have you been cut?"

"Yes," the woman answers, holding up the cloth she is sewing.

Kaba tries again. "No, not the cloth — down there!"

The veiled woman shakes her head and turns back to her fabric.

Getting women to admit they've been circumcised is not easy. But a new medical facility in the German capital seeks to help victims of female genital mutilation, also known as female genital cutting, by offering what its founders call the most comprehensive treatment available in Europe.

Doctors there say the goal of the Desert Flower Center is to help women become whole again by ridding them of the physical and psychological pain resulting from forced circumcision. They've turned to immigrant groups and women's organizations like Mama Afrika to find patients, who receive the care free through German health insurance and donations.

Mama Afrika's Kaba says most of the women in this sewing class had part or all of their external genitalia cut off years ago. The practice is a long-standing tradition across religious lines in most of Africa and in parts of Asia and the Middle East.

The World Health Organization says about 140 million women and girls are living with medical issues like incontinence or abnormal growths called fistulas, as well as psychological consequences of the procedure.

Proponents of the practice — most of whom are women — argue that cutting girls in this manner enshrines their purity and virtue.

I don't know what happened, I just feel a very sharp pain, you know? The way you feel, it's like you are already dead.

Jenny, who was circumcised in Sierra Leone

Kaba says her clients may live in Berlin, but they are still firmly entrenched in the culture of the countries they left behind. So when she tells the women about the medical facility a short drive away that can make them whole, most of them change the subject.

One student in the sewing class eventually admits that she's interested in getting the reconstructive surgery. She's the wife of an African diplomat and, fearing retribution from relatives, asks NPR not to name her.

She hopes that if the doctors rebuild her genitalia, sex will be easier and more enjoyable for her, she says.

But the diplomat's wife says she hasn't gone to the center because she's afraid her husband won't approve. She's also worried about her young daughters. Their relatives are already talking about circumcising them when they return to Africa.

The older daughter is 9 — the same age her mother was when she was circumcised.

Kaba explains that in many African nations, a woman is considered unclean if her genitalia are intact.

It's that belief — plus her aunt's promise of gifts and a big party — that Berlin resident Jenny says drove her to get circumcised more than two decades ago in Sierra Leone. She agrees to be interviewed, but asks that her last name not be used.

Jenny says she was 19 at the time she was cut, making her older than all of her friends who had the procedure done.

"They were laughing at me, saying: 'Look at her,' " Jenny explains. "They were telling me I'm unclean, I'm dirty — so you are tempted to do it."

She recalls how the women who took part in her circumcision braided her hair and carried her to a hut made of palm leaves. She was blindfolded and the women stood on her arms and legs to keep her from moving.

"I don't know what happened, I just feel a very sharp pain, you know?" she says. "The way you feel, it's like you are already dead."

A Struggle To Find Patients

On a recent afternoon, Jenny sat nervously in the waiting room of the Desert Flower Center in Berlin. The center, created by former Somali supermodel Waris Dirie, who was circumcised when she was 5, is located inside a Berlin hospital specializing in women's health care.

Jenny says she hopes doctors here can undo the misery that she says has defined her life since her mutilation.

"It makes me so sad. Sometimes I am just depressed in my house, like two, three days," she says. "Why should I go out? Nobody loves me."

Fellow patient Senait Demisse sits down next to her. She's the Ethiopian nanny working for Dirie and had the surgery last fall. Demisse tries to reassure Jenny.

"All is good, don't be scared, eh?" the nanny says with a laugh. Jenny asks Demisse whether she looks and feels "normal" now that the surgery is finished. Demisse tells her she feels great, but that it takes about six months to fully heal.

Scherer is the head consultant at the Desert Flower Center, which opened last fall and expects to treat up to 100 victims of female genital mutilation a year. Scherer says the center takes a holistic approach, caring not only for these women's surgical needs but also their psychological and social ones.

"They have a very long history of traumatic situations and so it's not only the operation," he says.

Oftentimes, he adds, husbands demand a divorce if their wives go ahead with the surgery.

Scherer says it's a struggle to find patients, even though activists estimate there are 24,000 female genital mutilation victims living in Germany alone.

Mama Afrika founder Kaba says she'll do whatever she can to get her clients to go to Desert Flower but adds that the millions being spent on the medical facility would have more impact if the money were used to stop female genital mutilation in the first place.

The funds should go to educate health care givers and village elders in the countries where female genital mutilation is widely practiced, she says.

Kaba says that just about all countries officially forbid the procedure, but it continues anyway because governments don't want to fight long-standing traditions.