Accessibility links
A Sharp Rise In Earthquakes Puts Oklahomans On Edge For the past three decades, the state averaged about 50 quakes a year. Last year, there were almost 3,000. Some geologists say the state's oil and gas industry might be to blame for the increase. 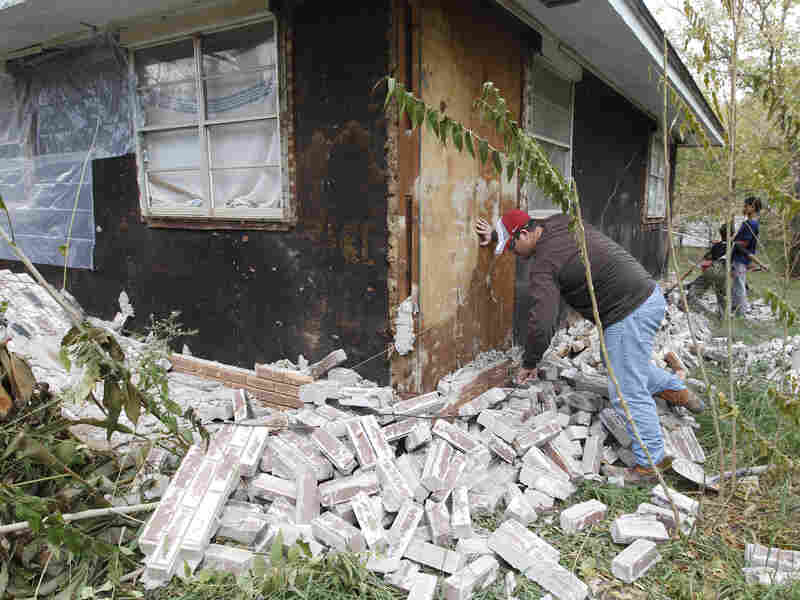 Chad Devereaux cleans up bricks that fell from his in-laws' home in Sparks, Okla., in November 2011, after two earthquakes hit the area in less than 24 hours. Sue Ogrocki/AP hide caption 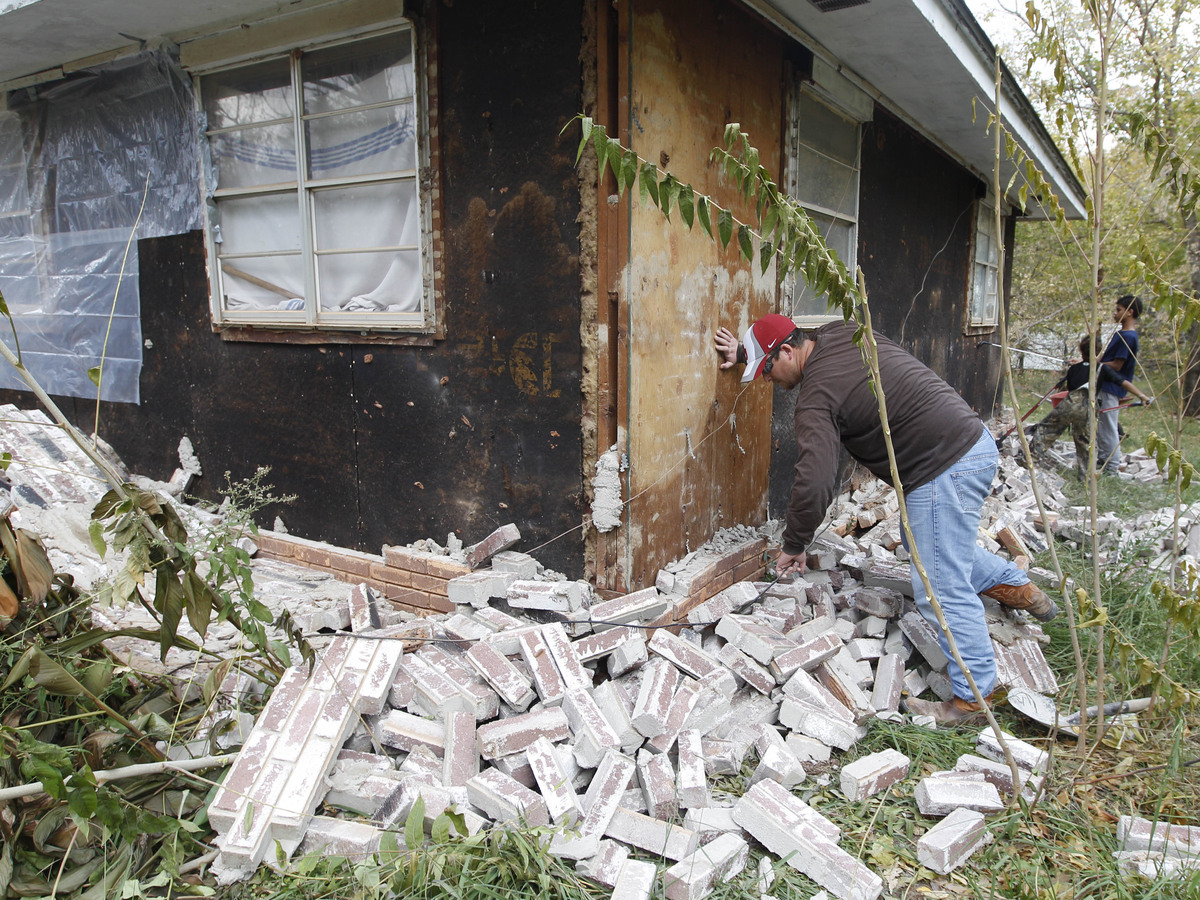 Chad Devereaux cleans up bricks that fell from his in-laws' home in Sparks, Okla., in November 2011, after two earthquakes hit the area in less than 24 hours.

For the past three decades, Oklahoma averaged about 50 earthquakes a year. But that number has skyrocketed in the past few years. In 2013 — the state's most seismically active year ever — there were almost 3,000.

The quakes are small, and they're concentrated in the central part of the state, where the Erwins live.

Amanda Erwin says that even on a clear day, she knows something's up when the thunder begins: The chandelier swings, and the walls and bed start rumbling. Her husband, Keith, says the earthquakes remind him of the artillery he used to hear growing up near a military base. And when the sound and shaking fade, the game starts.

In October, the U.S. Geological Survey warned that Oklahoma's risk of quakes has increased tenfold. The swarm of earthquakes includes Oklahoma's largest ever, a 5.6-magnitude temblor that struck east of Oklahoma City in 2011.

"That doesn't mean that there's going to be a large earthquake tomorrow, or next month, or next year even. But those probabilities are up very substantially," says Bill Leith, senior science adviser for earthquake and geologic hazards at the USGS.

He says there's evidence linking Oklahoma's earthquakes to the state's large oil and gas industry. When they drill, toxic fluid from hydraulic fracturing, or fracking, and other types of drilling is injected deep underground. That can change pressures near fault lines, says Katie Keranen, a seismologist at Cornell University.

"We can show that it's quite reasonable that water flowing from these wells is actually triggering these earthquakes," Keranen says.

But while scientists say the quakes are likely connected to the wells, there's no proof. That's why regulators aren't considering new rules or laws.

Austin Holland, a research seismologist with the Oklahoma Geological Survey, says oil and gas activity might trigger earthquakes, but it could just be a natural increase.

"I don't think we can, at this point, attribute all the earthquakes to some sort of man-made cause," Holland says.

In the fall, state regulators did force one well operator along the Oklahoma-Texas border to reduce injection volume and pressure after a series of earthquakes nearby. But the state might allow an experiment — to let the company increase the injections to see if it does trigger more rumbling. Scientists, like Holland, would monitor the outcome.

"Or, no earthquakes happen and we say, 'Wow, that was the most amazing coincidence we've seen,' and we move on," Holland says.

Back at the Erwin home, every little noise or rumble sends them scrambling for the iPad to see if they felt a real earthquake or a phantom.

"You feel like you're playing Battleship," says Amanda Erwin. "You look at the map, and you see these little pings of all the different places where they hit."