Accessibility links
Lovebirds + String + Watering Can + Dog = Rube Goldberg Magic The term "Rube Goldberg machine" has become shorthand for a convoluted contraption made up of a series of chain reactions. But Goldberg was also a real person, whose ideas for whimsical devices have captivated imaginations for decades.

Many people know Rube Goldberg as an adjective — a shorthand description for a convoluted device or contraption. But Rube Goldberg was a real person — one who earned a Pulitzer Prize for editorial cartooning and who captivated imaginations with drawings of complex chain reactions that completed the simplest of tasks.

Goldberg died in 1970, but Jennifer George, his granddaughter, has collected the zany world he created in a coffee table book, The Art of Rube Goldberg: (A) Inventive (B) Cartoon (C) Genius. 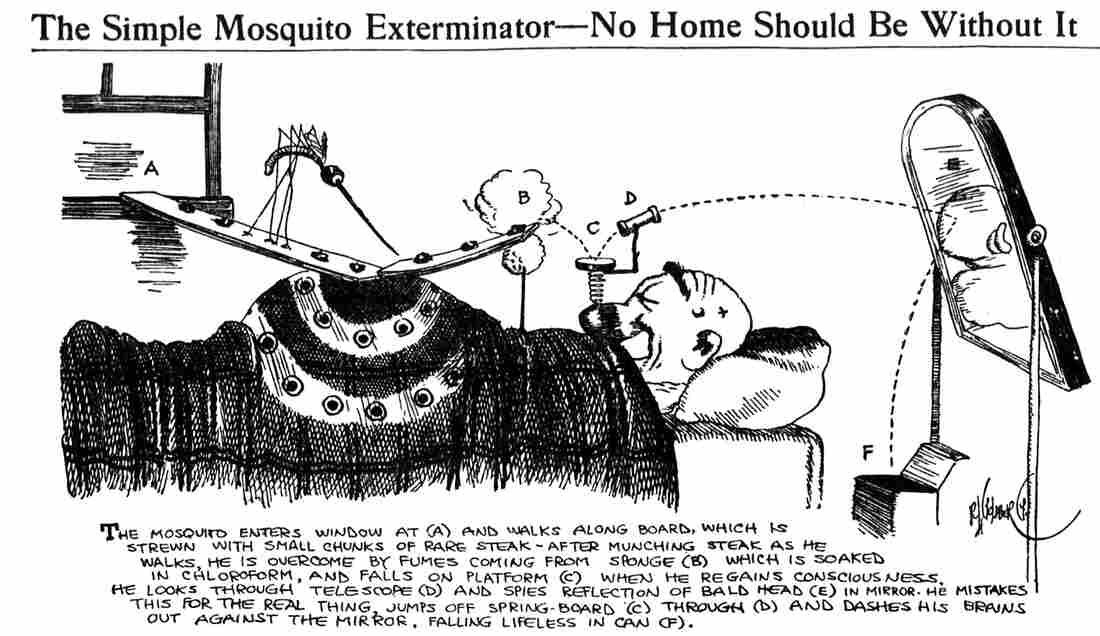 From 1912, this is the first of Goldberg's invention cartoons. Initially, he created only about a dozen such drawings over several years — until they caught on and he realized he had a hit on his hands. Copyright Heirs of Rube Goldberg/Abrams ComicArts hide caption

Her grandfather's drawings are "kind of the analog to the digital age," George tells NPR's Linda Wertheimer. "Any Rube Goldberg machine worth its salt goes viral on the Web today." 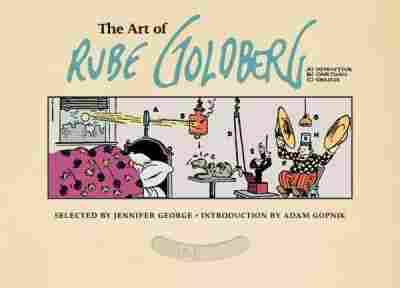 The Art of Rube Goldberg

A) Inventive (B) Cartoon (C) Genius

"I think he was enraptured by the possibilities of complicated machines," adds Adam Gopnik, a staff writer for The New Yorker who wrote the book's introduction. Much of the appeal of Goldberg's ideas, he says, is how they are both complex, but also visibly tangible.

"So I also think that we look at Goldberg's drawings with a certain amount of nostalgia for a lost era, when our machinery was at least lucid," Gopnik says.

Many of Goldberg's works center on a fictional inventor, Professor Lucifer G. Butts, whose bizarre mishaps help him dream up ideas for machines. In one, Mr. Butts trips at a miniature golf course, giving him an idea for a device that empties ash trays by way of two love birds, a piece of string, a watering can, a shirt, a framed portrait, a dog and a rocket tied to a bag of asbestos.

The line drawing is a parody of actual patent drawings at the time, Gopnik explains. "It's the way drawings of that period, showing how complicated mechanisms really worked — only his always had this beautiful overcharge of needlessness."

Many of Goldberg's works center on a fictional inventor, Professor Butts, whose bizarre mishaps help him dream up ideas for machines. Abrams ComicArts/Copyright Heirs of Rube Goldberg hide caption

Many of Goldberg's works center on a fictional inventor, Professor Butts, whose bizarre mishaps help him dream up ideas for machines.

The National Cartoonists Society's annual award, the Reuben Award for Outstanding Cartoonist of the Year, is named for Goldberg, the society's first president. Not that the honor was enough for him, Jennifer George laughs.

"When he was getting on in years, he was very upset that he had not won a Reuben. And my father had to explain to him, 'But you know, Rube, it's named after you!' "

Ultimately, Goldberg did win his own Reuben in 1967, three years before his death.

Almost 50 years later, Gopnik sees no end in sight for Goldberg's legacy. "We live at the end of the great mechanism," he says. "So we look back at [his ideas] ... with a certain longing for a world as neat, as sharp, as black and white and lucid as Goldberg's world was.

"So I think as long as we have a fascination with machines, with mechanisms, Goldberg's work will go on. "