Accessibility links
Kentucky County That Gave War On Poverty A Face Still Struggles In 1964, President Johnson traveled to Martin County, Ky., to try to sell his "war on poverty" to the American public. What residents say they need now is steady work. 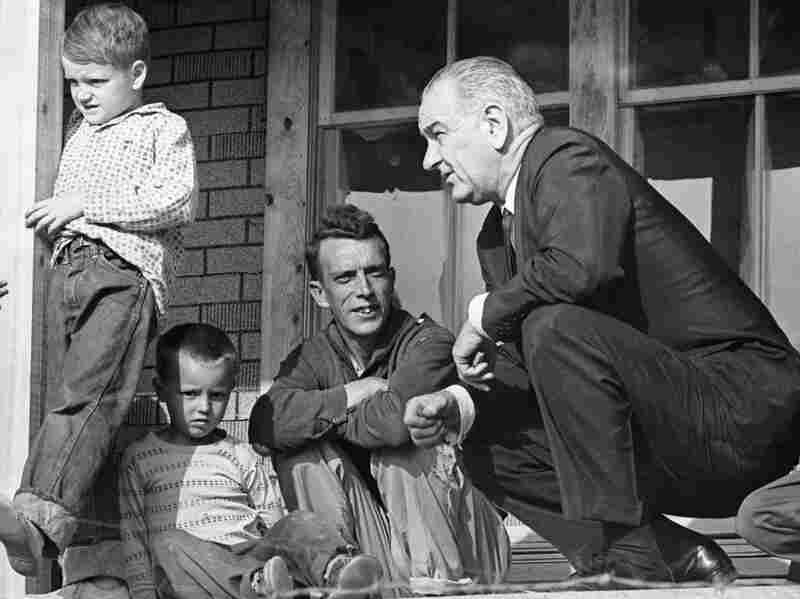 President Lyndon Johnson, on the porch of Tom Fletcher's cabin, listens to Fletcher describe some of the problems in Martin County, Ky., in 1964. Bettmann/Corbis hide caption 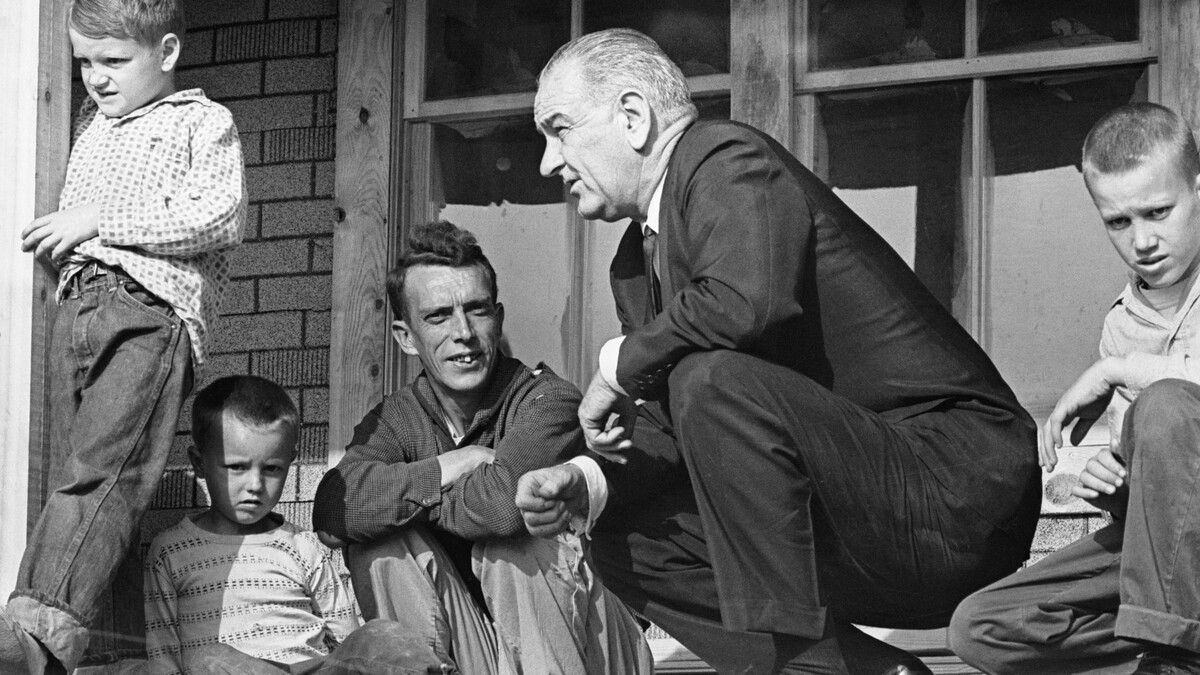 President Lyndon Johnson, on the porch of Tom Fletcher's cabin, listens to Fletcher describe some of the problems in Martin County, Ky., in 1964. 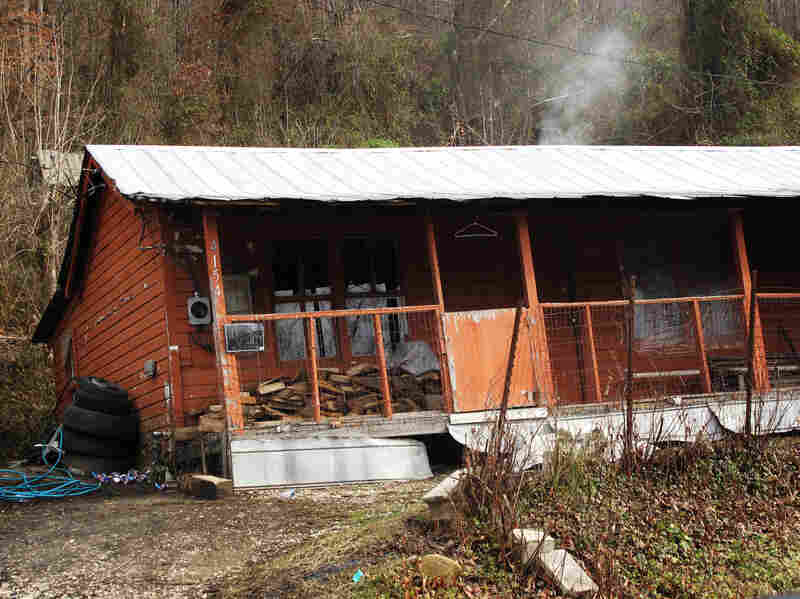 This is the Fletcher cabin today. It now has wood siding and is painted orange. Pam Fessler/NPR hide caption 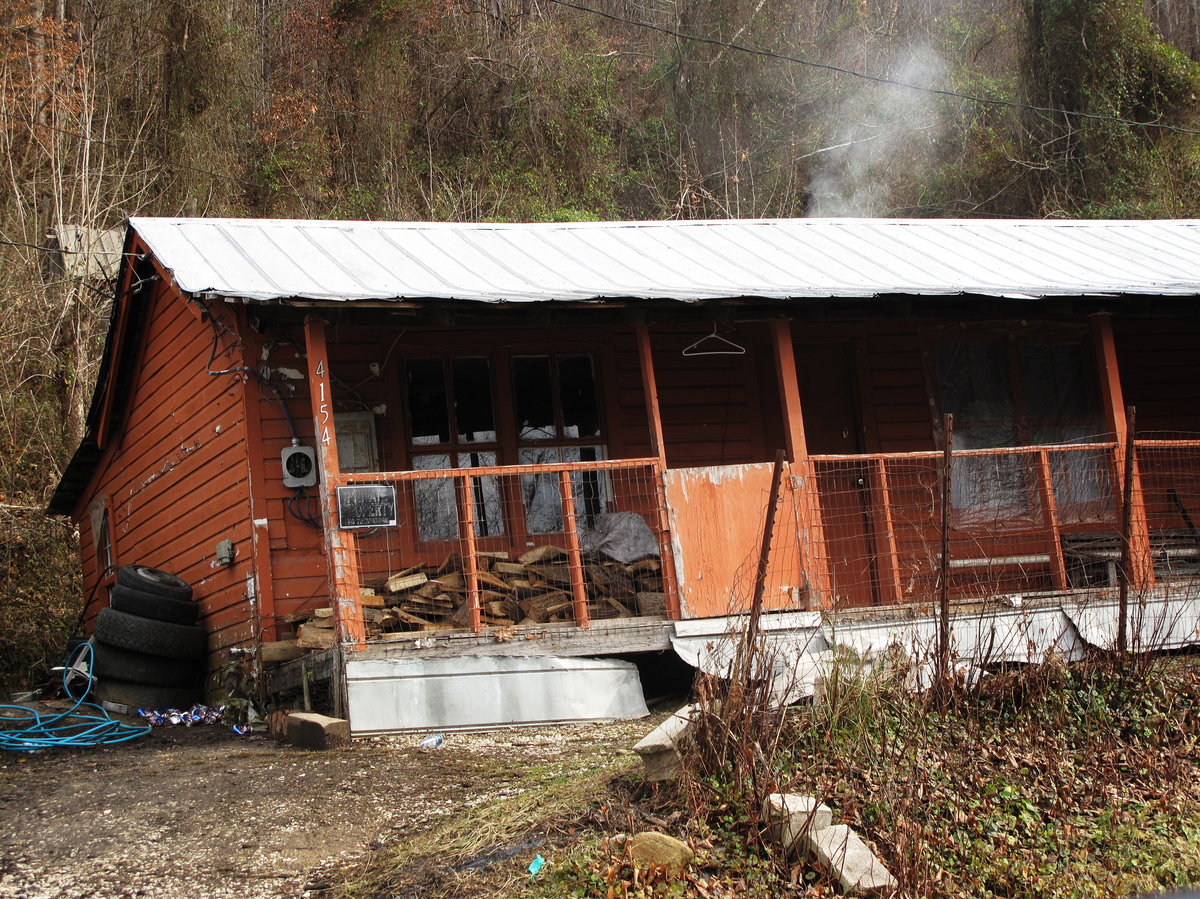 This is the Fletcher cabin today. It now has wood siding and is painted orange.

At the time, 1 in 5 Americans was poor. Today, things are better, but tens of millions of Americans are still living at or below the poverty level. That raises the question: Did the war on poverty fail? In the coming year, NPR will explore this question and others about the impact and extent of poverty in the U.S., and what can be done to reduce it.

People in the isolated hills of Martin County, Ky., rarely saw outsiders, let alone a president. So when President Lyndon Johnson visited in 1964 to generate support for his proposed war on poverty, it was a big deal.

Lee Mueller, a young newspaper reporter at the time, recalls the crowds in downtown Inez, Ky., the county seat, waiting for the presidential party to arrive at an abandoned miniature golf course.

"It was just like a hayfield full of long grass. It looked like helicopters landing in Vietnam or something when they came over the ridge," he says.

Mueller says the locals didn't know their role in this new, domestic war. For the White House, though, coming to Martin County gave poverty a face — and a name.

"In this south-central mountain country, over a third of the population is faced with chronic unemployment," says a government film on Johnson's visit. "Typical of this group is Tom Fletcher, his wife and eight children. Fletcher, an unemployed sawmill operator, earned only $400 last year and has been able to find little employment in the last two years."

How Is Poverty Measured?

The official poverty rate is based on the minimum income needed to feed a family in the 1950s. It's updated each year to reflect changing prices but not the declining share that food plays in the typical family budget. What's more, the rate does not account for many forms of government assistance such as food stamps or housing subsidies.

At the time, the poverty rate in this coal-mining area was more than 60 percent. Johnson visited the Fletchers on the porch of their home — a small wooden structure with fake brick siding. Photographers took what would become one of the iconic images of the war on poverty: the president crouched down, chatting with Tom Fletcher about the lack of jobs.

Fast-forward 50 years. The Fletcher cabin still stands along a windy road about 5 miles outside town. It now has wood siding and is painted orange. There's a metal fence with a "no trespassing" sign to keep out strangers. There are lots of small houses and trailers along this road, but also some new, bigger homes that could be found in any American suburb.

Today, the roads here are well-paved. People say the schools and hospitals are much better than they used to be. Still, Martin County remains one of the poorest counties in the country. Its poverty rate is 35 percent, more than twice the national average. Unemployment remains high. Only 9 percent of the adults have a college degree.

'I Would Be Homeless'

Much of the poverty today is tucked between the mountains in what are called "the hollers." That's where Norma Moore lives with her 8-year-old grandson, Brayden. She says his parents didn't want him. He was born with a rare blood disease and is severely disabled. "And they said he was dying, and then at 4 months I got him, and I've had him ever since," Moore says.

Brayden doesn't walk or talk. He's in constant motion, rolling on the floor of their double-wide trailer home, bumping into walls and doors.

There's no question that Moore's life is incredibly stressful. She says she gets by on her faith. But here's where the war on poverty has also made a big difference: Today, she gets food stamps and energy assistance to heat her home — programs with roots in Johnson's anti-poverty initiatives — as well as Supplemental Security Income (SSI) for her grandson. 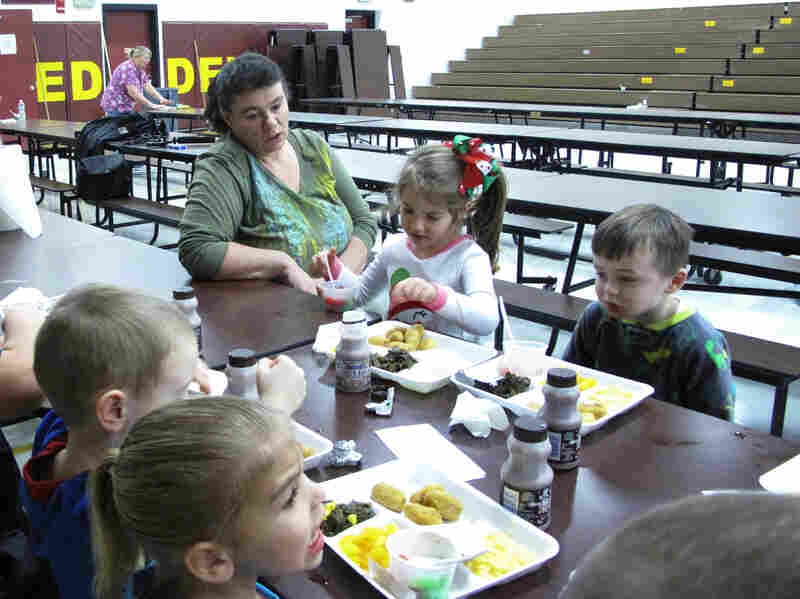 Delsie Fletcher works with Head Start — a legacy of the war on poverty — in Martin County, Ky. Her husband was one of the children who stood on the porch with President Johnson in 1964. Pam Fessler/NPR hide caption 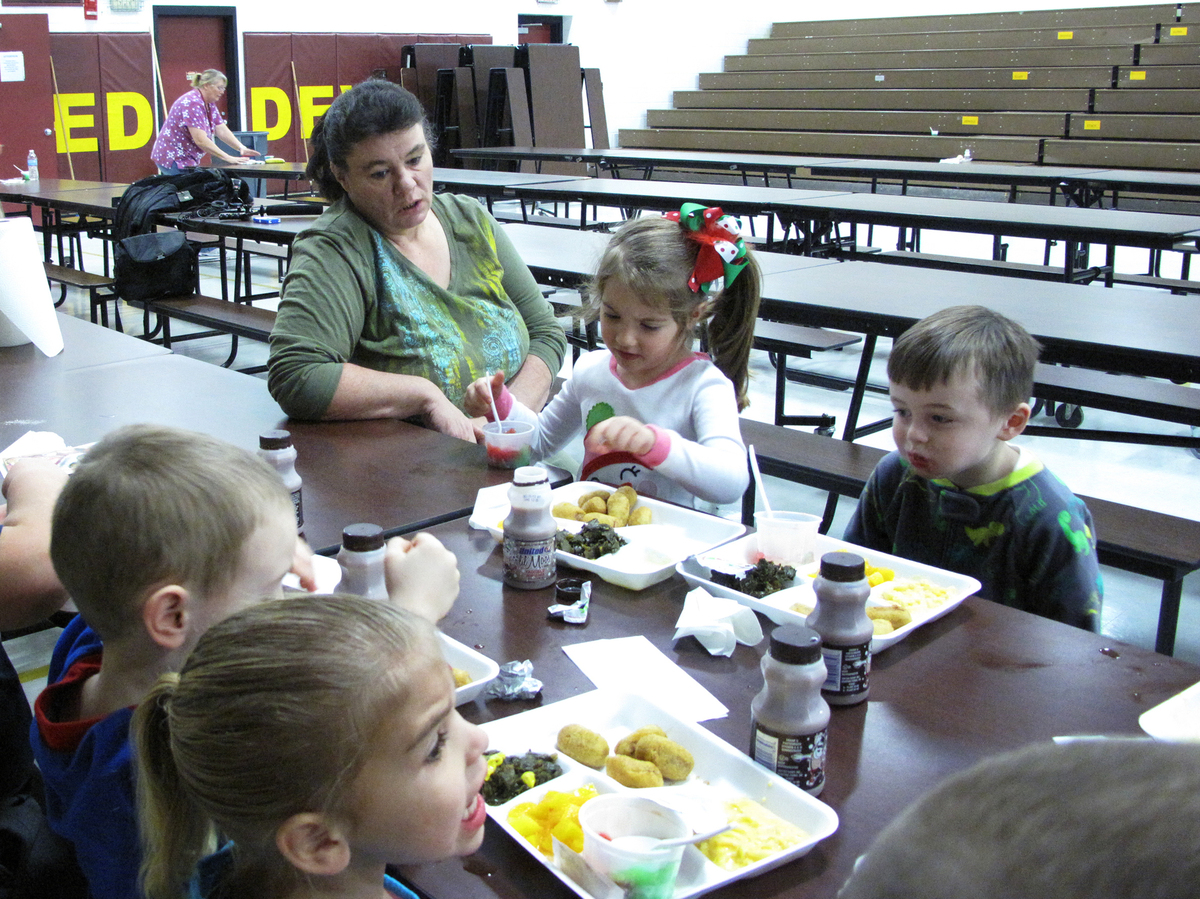 Delsie Fletcher works with Head Start — a legacy of the war on poverty — in Martin County, Ky. Her husband was one of the children who stood on the porch with President Johnson in 1964.

Moore shakes her head thinking about life without the help. "I would be homeless. I would be the one living on the street if it wasn't for that," she says. She looks down at her grandson on the floor. "He would probably be in a home somewhere."

Today, many people here rely on government aid. In fact, it's the largest source of income in Martin County. People say it has helped to reduce hunger, improve health care and give young families a boost, especially at a time when coal-mining jobs are disappearing by the hundreds.

Head Start is one of the signature programs of the war on poverty — helping low- and moderate-income children get ready for school. Budget cuts are always a concern. Some of the county's children get their only hot meals of the day at school.

Delsie Fletcher helps Head Start parents in Martin County with services, such as getting their high school diplomas. And yes, Delsie is one of those Fletchers, married to one of the children who stood on the porch with President Johnson.

So has the war on poverty helped her husband's family? Turns out, along with the famous photo, it's a sore topic.

"They don't like to talk about it, because they don't want to be known as the poorest family in Martin County," she says.

And she says they probably weren't. Most of the Fletchers have done OK for themselves. Still, it hasn't been easy. Her husband had some of his toes cut off when he worked in the sawmills, and now he's on disability. Work around here can be tough — and dangerous — which is why coal-mining jobs pay so well. But now they're scarce, and there's nothing to replace them. People are struggling to adjust. 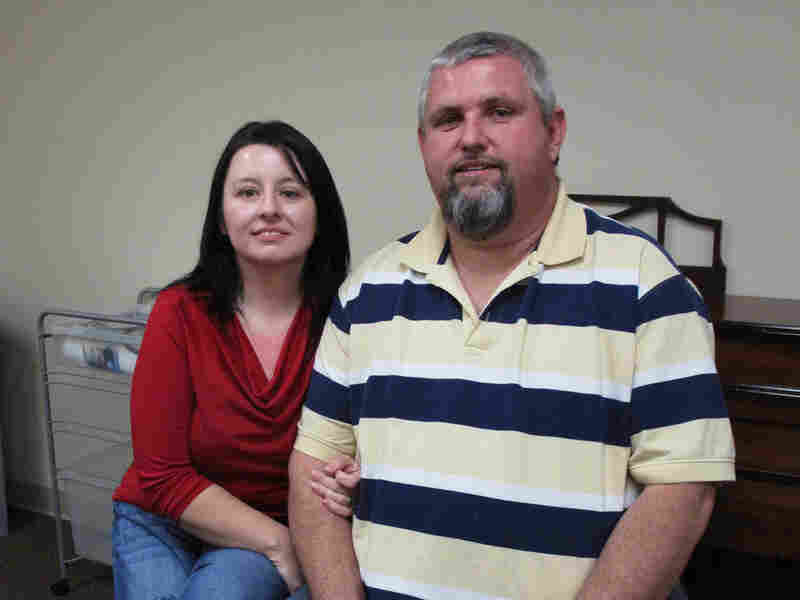 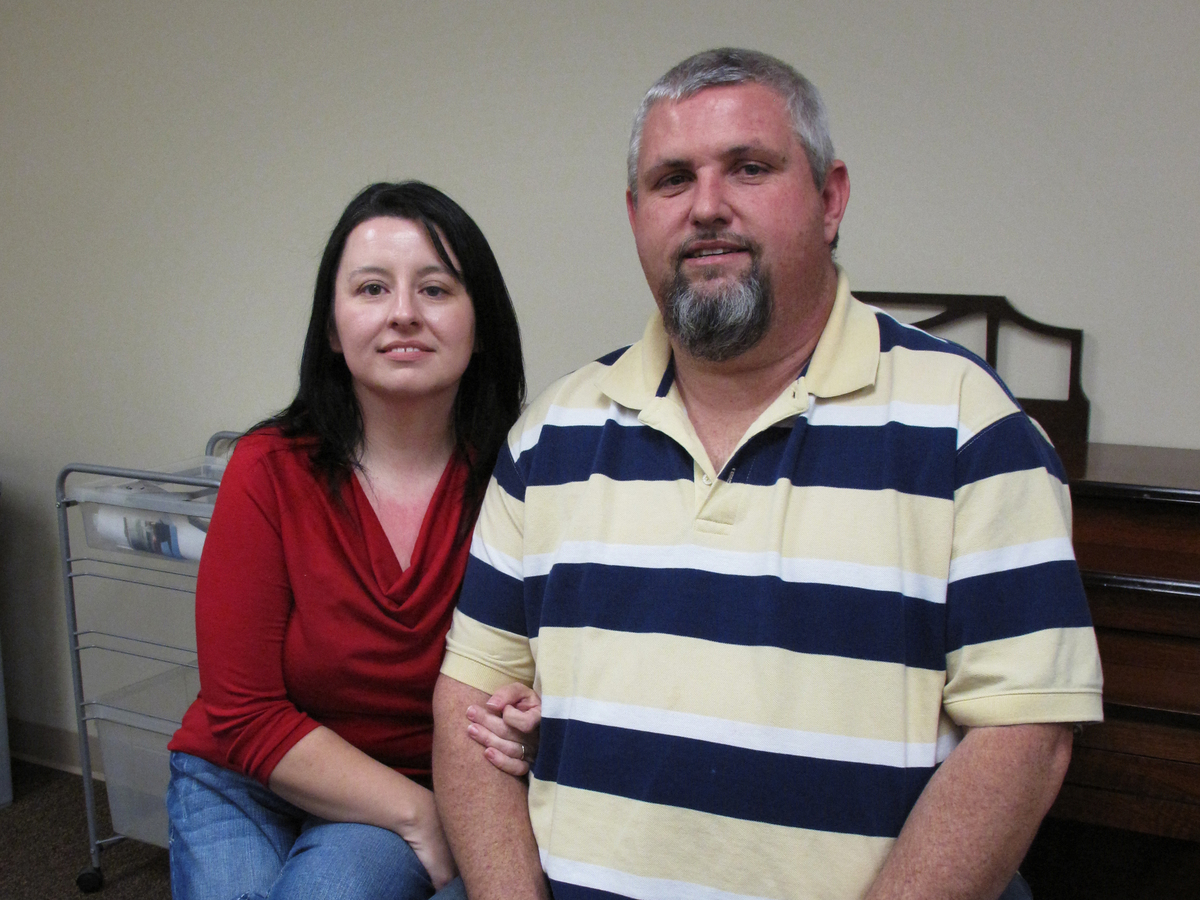 Thomas Vinson, an unemployed coal miner, with his wife, Angela. He says he's grateful for short-term federal help, but he's worried about his future.

'I Call It Abusing The System'

Thomas Vinson, a Martin County resident for 41 years, used to work in the coal fields, but he is currently unemployed. Vinson says he has a big house payment and three sons to raise. Times are tough, he says, but "we are making it."

One reason is that Vinson's wife got a job at a gear factory through a federally funded program to help unemployed miners. Vinson is grateful for the short-term help but worried about his future. In the big picture, he's disappointed in the war on poverty. He says he sees too many people around here just collecting checks.

"They call it poverty, but I call it abusing the system. Like, if you're going to file for SSI, you go in there and say the right things, you'll come out of there with a check," he says.

His feelings are widespread around here: What good are all these government programs if they don't get you a job?

Mike Howell runs the Big Sandy Area Community Action Program where the Vinsons went for help. The program is a direct result of the war on poverty. Howell agrees that the war has yet to achieve its goals, but says the reason is a lack of support. The burst of enthusiasm after President Johnson's visit has waned, he says. Every year, his program has to fight for funds.

"We've kind of let poverty go to the side," says Howell. "It's still way too high. Somebody asked me one time about the war on poverty, and I said, 'Well, it really wasn't a war — it was more of a skirmish.' And we need to declare war on poverty again."