Accessibility links
Coal-Mining Area Grapples With How To Keep 'Bright Young Minds' Residents of Martin County, Ky., where President Johnson traveled to promote his War on Poverty in 1964, say they need jobs more than government aid. 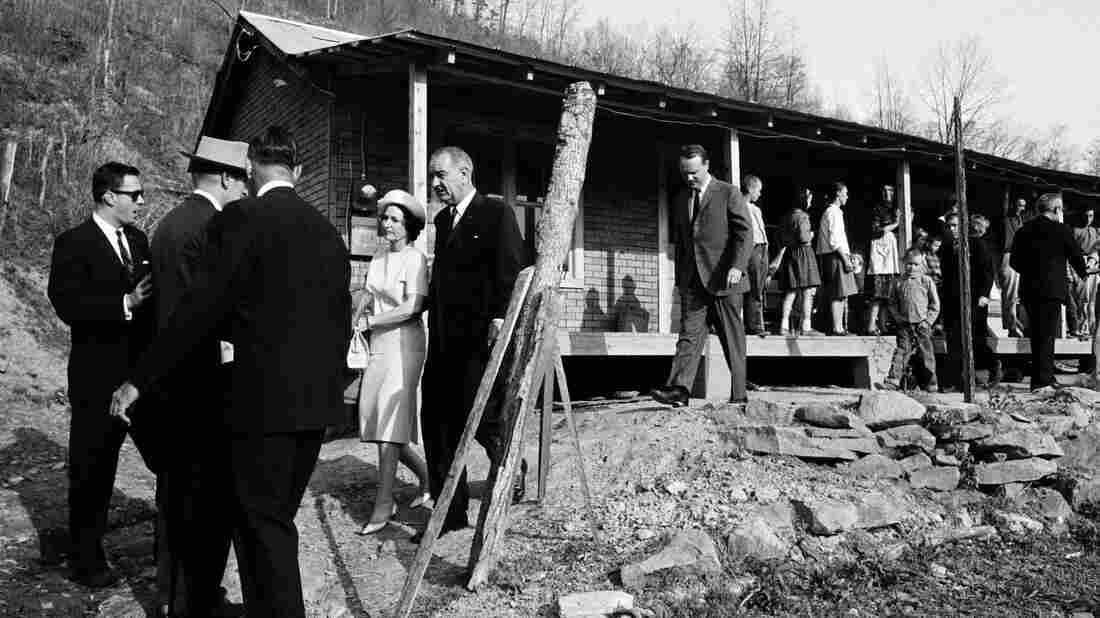 President Lyndon Johnson and his wife, Lady Bird, leave a home in Inez, Ky., during a 1964 visit to Martin County. AP hide caption 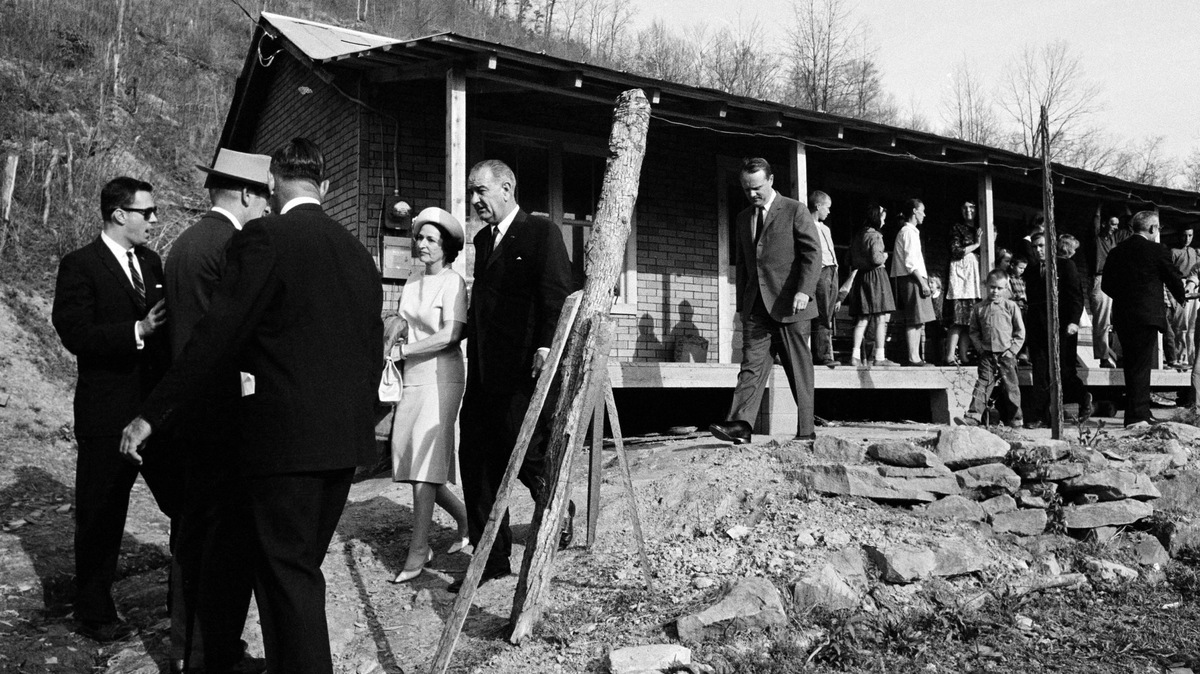 President Lyndon Johnson and his wife, Lady Bird, leave a home in Inez, Ky., during a 1964 visit to Martin County.

In the coming year, NPR will explore the impact and extent of poverty in the U.S., and what can be done to reduce it.

When President Johnson waged war against poverty in 1964, he traveled to Martin County, Ky., an Appalachian coal-mining region with a poverty rate of more than 60 percent, to promote his campaign.

Today, the poverty rate in Martin County is lower than it was when Johnson visited, but it's still 35 percent, more than twice the national average. Coal mines are shutting down, and many of the youngest and brightest residents say that they have to leave the county if they want to make a living. 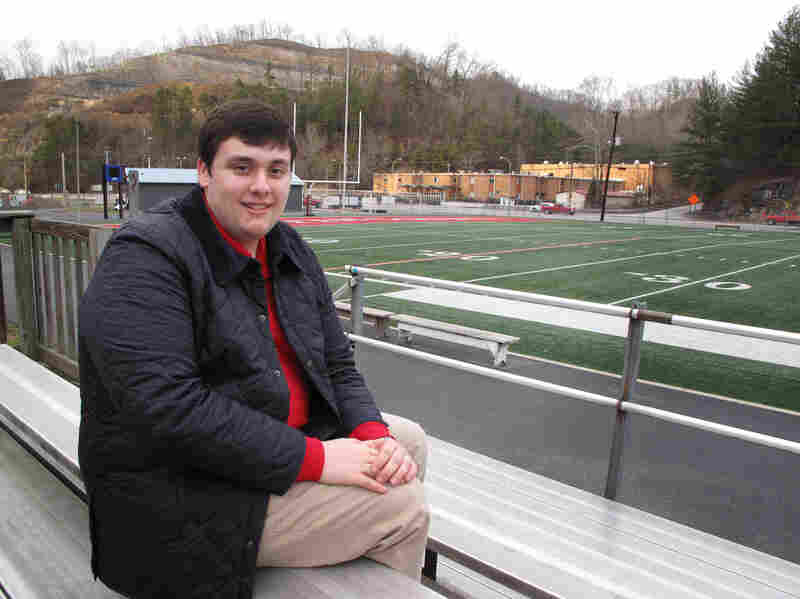 Colby Kirk of Inez, Ky., is a junior at the University of Kentucky, studying to be a financial analyst. He says there aren't many opportunities for college grads in his hometown. Pam Fessler/NPR hide caption 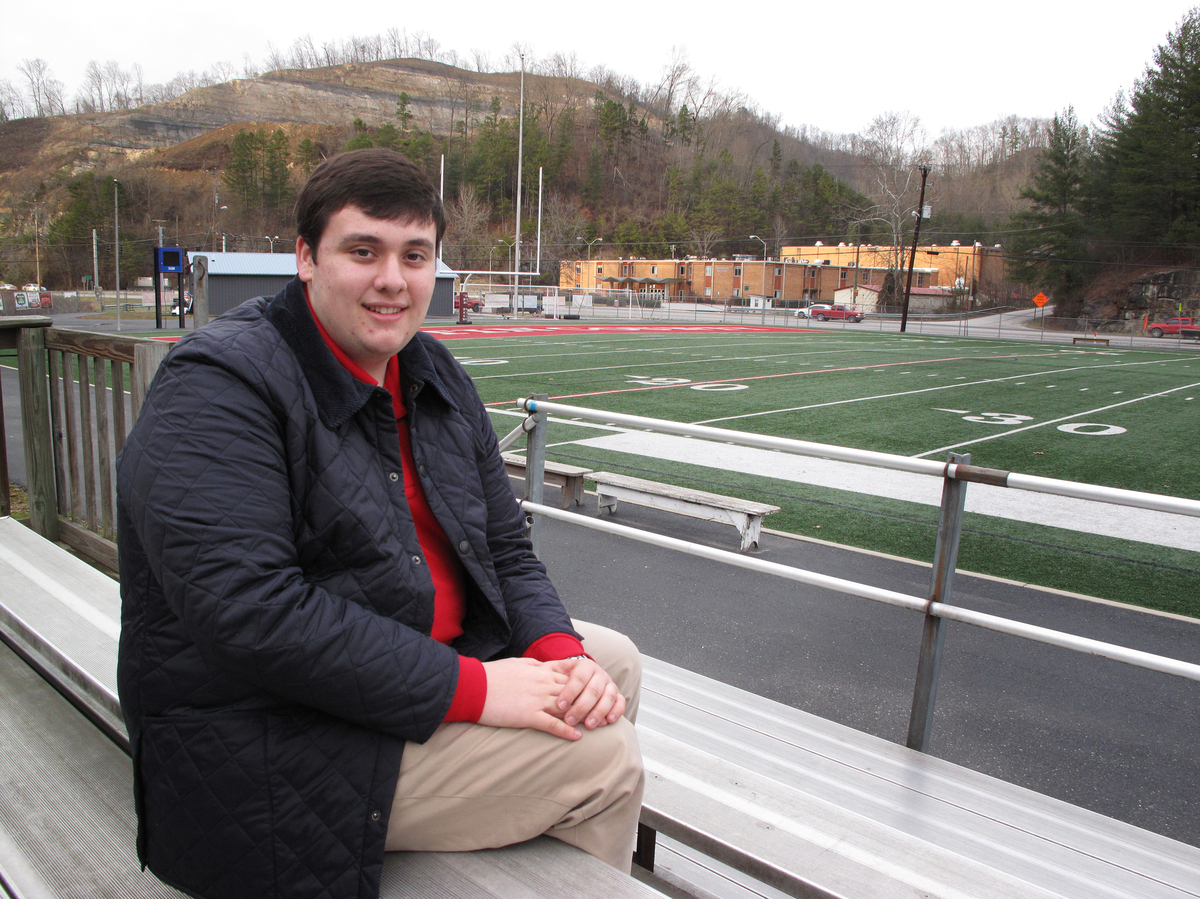 Colby Kirk of Inez, Ky., is a junior at the University of Kentucky, studying to be a financial analyst. He says there aren't many opportunities for college grads in his hometown.

Colby Kirk is a junior at the University of Kentucky studying to be a financial analyst. He'd like to come back someday to his hometown of Inez, Ky., nestled in the mountains of Appalachia.

Sitting in the stands of the high school football field beneath one of those mountains, not far from where Johnson visited in 1964, Kirk says he knows things are a lot better here than they were back then.

"You know, paved roads, everyone's got a car, there's a half of a McDonald's right there," he says. He points to a nearby gas station.

Still, he says, "There's not really any opportunities for college grads back here — unless you make your own. It's really hard to do that if you're a financial analyst."

Michelle Harless, a guidance counselor at the local high school, says she sees the best and the brightest leave Martin County.

"I would say one of our biggest exports is bright young minds," she says.

Even with her college degree.

But those high-paying coal jobs are disappearing. Hundreds of miners here have been laid off recently, and there are no jobs to replace them, which means lots of people here have had to turn for help to some of the many government programs spawned by the War on Poverty — food stamps, Medicaid, home heating assistance.

Today, more than half the income in Martin County comes from government payments.

Mike Howell, who runs the Big Sandy Area Community Action Program, says many more people here would be struggling without the War on Poverty but that it's only helped them so much.

"In my opinion, you can never get out of poverty if you don't have a job," Howell says.

"And it can't just be minimum wage jobs. It can't be jobs that just will barely get you by. But in order to get those jobs, people have to have the education to be able to do those jobs."

His program provides some of that education and training. But getting funding is a constant challenge — and there have to be jobs to fill. So this area, like many across the country, is grappling with how to attract new businesses. State and local leaders say they need more highways and broadband access, to bring technology, tourism and factory jobs to this isolated region.

I would say one of our biggest exports is bright young minds.

Duncan is concerned about all the talent leaving and has offered internships to students like Kirk in the hopes that they, like him, will eventually settle in Inez. Duncan says the War on Poverty has been a mixed blessing for the area's economic growth. It's improved health and lifted many Appalachians out of poverty.

"But there've been some problems, too," he says. "There's in some instances a lack of self-reliance. I think the entitlement mentality has done away with some things that I consider very strong Appalachian values. Sometimes, it's more difficult to get casual laborers today."

This is especially true for low-paying jobs, he says, although others complain those jobs pay too little to live on. Kirk hopes people find a solution soon. He says a local newspaper editor used to ask one question repeatedly: What will we do when the coal is gone? Kirk thinks too few people here took that question seriously. Until now.

Does the country need another war on poverty?

"I think we should re-evaluate our war strategy at least," Kirk says. He thinks it's not so much today about feeding families — as it was 50 years ago — but about giving young people hope.