Accessibility links
What's Behind The Drop In Unemployment The unexpected dip to 6.7 percent may seem like good news, but the rate slid in December in part because the country found itself with a smaller workforce as people retired or just dropped out. At the same time, most of the jobs being created are in low-wage industries. 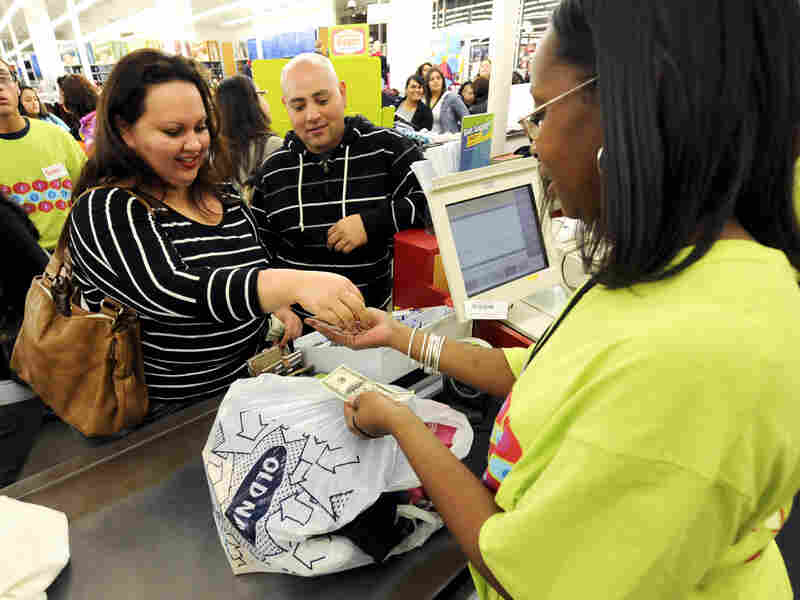 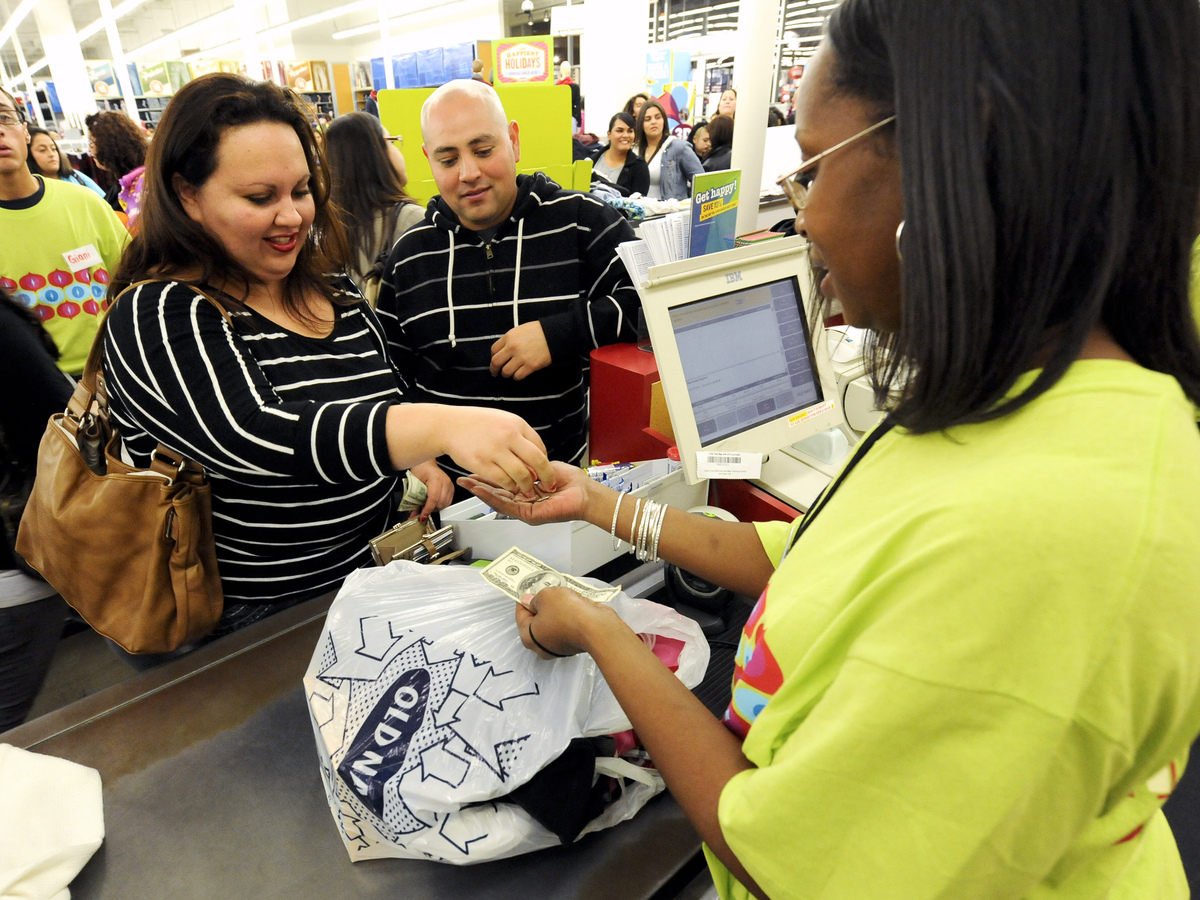 Shoppers make a purchase at an outlet mall in Los Angeles. Employers added 55,000 jobs in the retail sector in December.

Marilyn Geewax Discusses The Job Market On 'Tell Me More'

Why Getting A Job Doesn't Mean Getting Out Of Poverty

Whether you had a job or were looking for one, December was a gloomy month.

The Labor Department said Friday that for December, employers added only 74,000 jobs — about a third as many as most economists had been predicting. That was the lowest level of job creation in three years — not exactly the news that 10.4 million job seekers wanted to hear.

But even people who had paychecks got lumps of coal. Employers reduced the average workweek by 0.1 hours, down to 34.4 hours in December. And they increased workers' hourly pay by just 2 cents, to an average of $24.17. For the year, workers' wages were up 1.8 percent from 2012.

Even the apparent good news — a lower unemployment rate — was widely interpreted as bad. The jobless rate fell three-tenths of a point to 6.7 percent, marking the first time in 60 straight months that the rate was below 7 percent. But the rate slid in part because the country found itself with a smaller workforce as people retired or just dropped out.

In fact, for the month, 347,000 people walked away, edging down the labor force participation rate to just 62.8 percent — the lowest level since 1978.

Economists who had been expecting better results said snow and ice contributed to the troubles. "Cold weather played a bigger role in December's job weakness than I expected," PNC Financial's chief economist Stuart Hoffman wrote in an analysis. "I am not sure it will be any better in January if the arctic freeze persists."

The dreary jobs news came at a time when the White House is marking the 50th anniversary of President Lyndon B. Johnson's launch of the "war on poverty," a broad collection of programs to reduce poverty. President Obama has been using the anniversary as an opportunity to focus on income inequality, which has increased in recent years.

Economy Adds Only 74,000 Jobs In December; Jobless Rate At 6.7 Percent

Every Job In America, In 1 Graph

Most of the new jobs created since the recession's end in 2009 have been concentrated in low-wage industries, namely retail, restaurants, hospitality and leisure. December continued that trend, with employers adding 55,000 jobs in the retail sector, but only 9,000 in manufacturing. Construction companies cut 16,000 jobs for the month. In general, factory and construction jobs pay much more than retail or hospitality jobs.

So workers' paychecks are being hurt by two factors: New jobs are growing mostly in low-wage industries, and those sectors attract so many applicants that employers don't need to raise wages.

Amid the wage squeeze, many households are having trouble staying in the middle class. About 15 percent of Americans live at or below the poverty line — well above the 12.5 percent rate that prevailed in 2007 before the Great Recession settled in.

When Johnson used his 1964 State of the Union address to demand action to help the poor, the nation's poverty rate was about 19 percent.

Congress heeded Johnson's call and created an elaborate safety net that included programs such as Medicare, Medicaid, Head Start and food stamps. By the time Johnson left office in 1969, the poverty rate was down to about 12 percent. And the unemployment rate was down from 5.7 percent in 1963 to 3.4 percent in 1969.

Also, over the five years of the Johnson administration, Congress raised the minimum wage from $1.25 to $1.60 — a 28 percent increase.

Now Obama is pushing Congress to raise the minimum wage to $10.10, and to renew extended unemployment benefits for the long-term jobless. And on Thursday, he called for the establishment of "promise zones" to boost private investment in poor communities around the country.