Accessibility links
Movie Review - 'The Rocket' - In A Past-Plagued Laos, A Youth Chases A Future In The Rocket, the debut feature from documentary director Kim Mordaunt ("Bomb Harvest"), an unlucky outcast in search of a new home enters a sports festival in rural Laos. It's risky — but the Rocket Festival could help him save his struggling family.

In A Past-Plagued Laos, A Youth Chases A Future

In A Past-Plagued Laos, A Youth Chases A Future 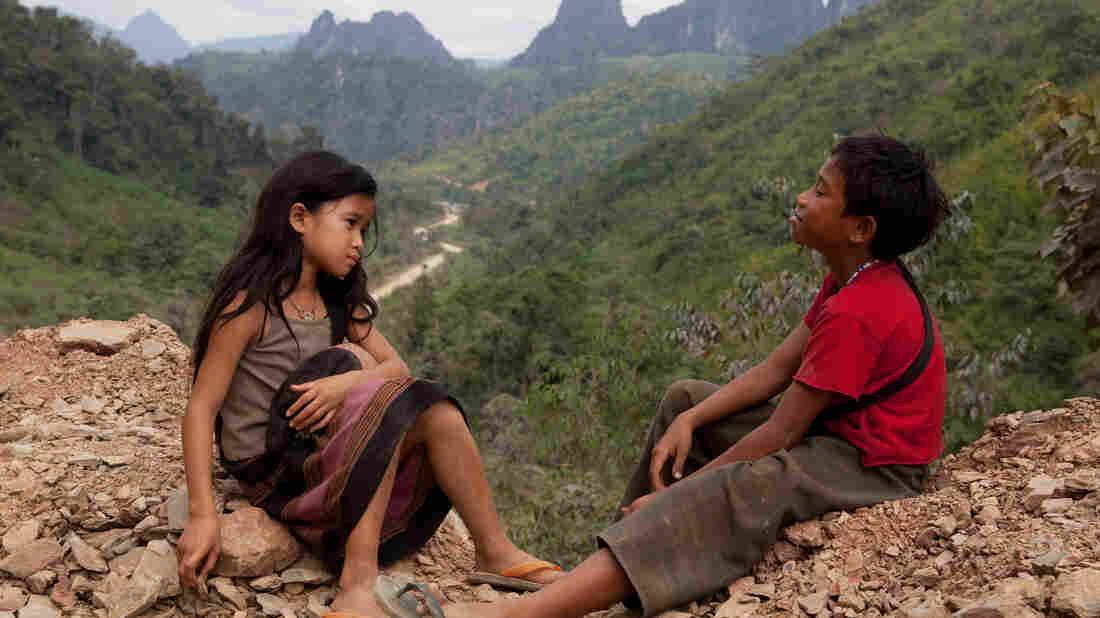 In Lao with subtitles

To help his struggling family and escape his own status as an outcast, a plucky young boy enters a competition. Yes, The Rocket is a sports movie, with an outcome that's easily foreseen. The cultural specifics of this Laos-set tale, however, are far less predictable.

Australian writer-director Kim Mordaunt came to his debut fiction feature via a documentary, Bomb Harvest, about Laotian children who collect scrap metal from American bombs. The Rocket's 10-year-old protagonist isn't one of them, but he does encounter some unexploded bombs and rockets — "sleeping tigers," in the local lingo. These become of particular interest to Ahlo (Sitthiphon Disamoe) when he learns about a singular contest.

The story begins, though, with Ahlo's birth, which his superstitious grandmother (Bunsri Yindi) deems inauspicious: Although his sibling is stillborn, Ahlo is technically a twin, which according to local lore means he may be cursed. But his mother (Alice Keohavong) refuses to kill him, as the older woman advises.

Nothing comes of grandma's premonition for a decade, until Laos's communist government and an Australian corporation announce plans for a new dam that will inundate the village where Ahlo and his family live. (There's only one Aussie in the film, and he doesn't even have a speaking part, but he embodies Mordaunt's regret about what his countrymen have done in Laos.)

On the way to their new home, catastrophe strikes the family, and grandma begins to chide that it's all Ahlo's fault. Things only get worse in the relocation camp, where the promised new houses haven't been built yet.

There, Ahlo befriends 9-year-old Kia (Loungnam Kaosainam) and her only surviving relative, "Uncle Purple" (Thep Phongam). Kia is playful, but a little more sensible than her new pal; her violet-suited uncle is an amiable alcoholic and, a bit too whimsically, obsessed with James Brown.

They're pariahs in the camp, so Ahlo's father (Sumrit Warin) orders him to avoid them. Still, the boy has a genius for getting into trouble all by himself, and after his antics enrage the shantytown community, Ahlo's family must join Kia and her uncle on the lam.

Making their way through a country still hobbled by a war that ended in the 1970s, the refugees encounter preparations for a "rocket festival" — the goal being to puncture the sky and release rains to end a troublesome drought. Thinking he can win enough money to buy his family a new home, Ahlo turns to Uncle Purple, a former child soldier, for tips on explosives.

Laos is reportedly the world's most bombed country, per capita, and The Rocket conveys a strong sense of the devastation. It also shows a documentarian's eye for the earthy rural culture, with its phallic talismans and animal sacrifices.

Like Beasts of the Southern Wild, the movie depicts a world where humans and other critters live closely together, and where animals are treasured yet routinely slaughtered. Ahlo himself is quite the killer, in fact, although Kia stops him from aiming his slingshot at one particular endangered species.

More poetically, Ahlo takes a swim that becomes metaphorical: Diving into a lake created by an existing dam, the boy floats past submerged statues that symbolize the country's scuttled traditions. This interlude, like the movie's conclusion, is both agreeable and a little glib.

As Ahlo, Sitthiphon Disamoe demonstrates the resourcefulness he learned during a period when he was a street seller and beggar. It's his exuberant performance, as much as the pungently naturalistic setting, that lifts The Rocket's scenario above the generic.