Accessibility links
There She Blew! Volcanic Evidence Of The World's First Map Some archaeologists have long suspected that a faded painting from the ruins of the 9,000-year-old village known as Catalhoyuk might be a map — of a settlement at the foot of an erupting volcano. Others said no. Now geologists have evidence that the volcano indeed erupted around that time. An analysis of pumice samples from Turkey's Hasan Dagi mountain confirms the volcano did erupt around 9,000 years ago — within the rough time frame of when the mural is thought to have been painted. Janet C. Harvey/PLoS ONE hide caption 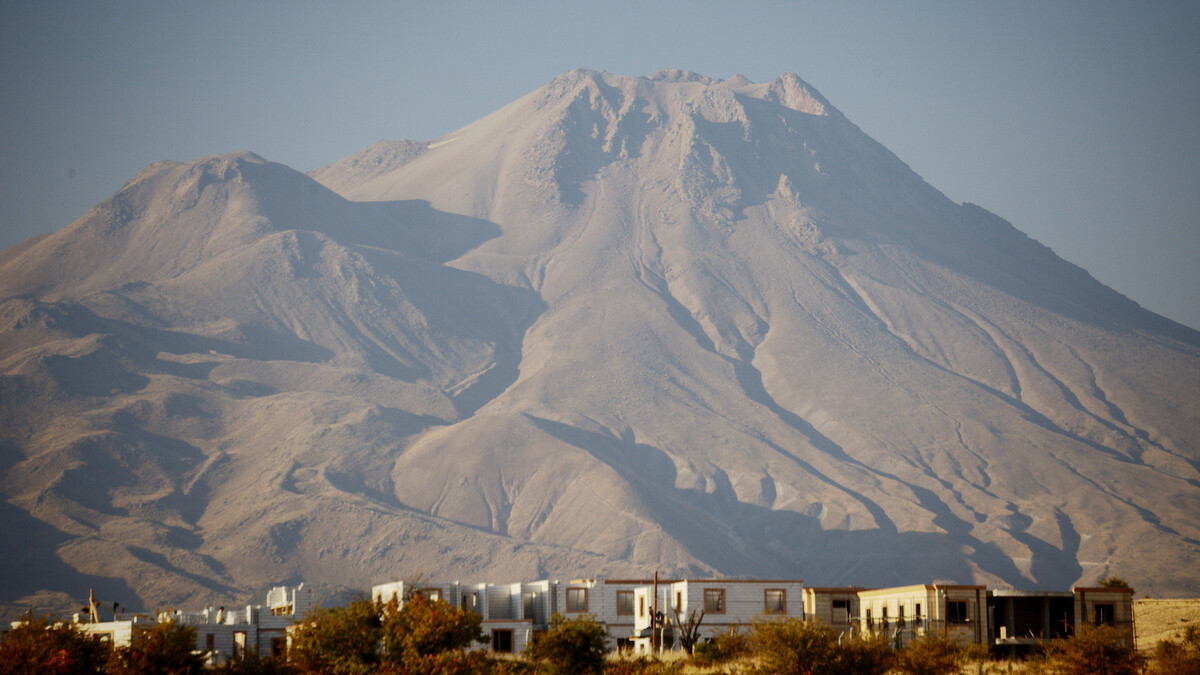 An analysis of pumice samples from Turkey's Hasan Dagi mountain confirms the volcano did erupt around 9,000 years ago — within the rough time frame of when the mural is thought to have been painted.

A new study of volcanic rocks suggests that an ancient mural may indeed depict an erupting volcano, adding new weight to a theory that this image is a contender for the world's oldest known landscape painting or map.

The mural was found at a vast archaeological site in central Turkey known as Catalhoyuk. This Neolithic town goes back 9,000 years and was a huge settlement for a time when people were first transitioning from hunter-gatherer to agricultural societies. Thousands of people lived there in mud-brick houses that were crammed together like honeycombs.

In the 1960s, British archaeologist James Mellaart said one mural showed the eruption of a volcano with two peaks — just like the one that lies about 80 miles away. In the mural, the volcano looms over what looks to be a bird's-eye view of the settlement's houses, laid out like a kind of schematic plan. This mural has often been called the world's oldest known map.

"In volcano textbooks or textbooks about cartography and mapping, they would always in their introduction mention this mural and that it's potentially the oldest map, and the oldest depiction of a volcanic eruption," says Axel Schmitt, a geologist at the University of California, Los Angeles, who studies volcanoes. 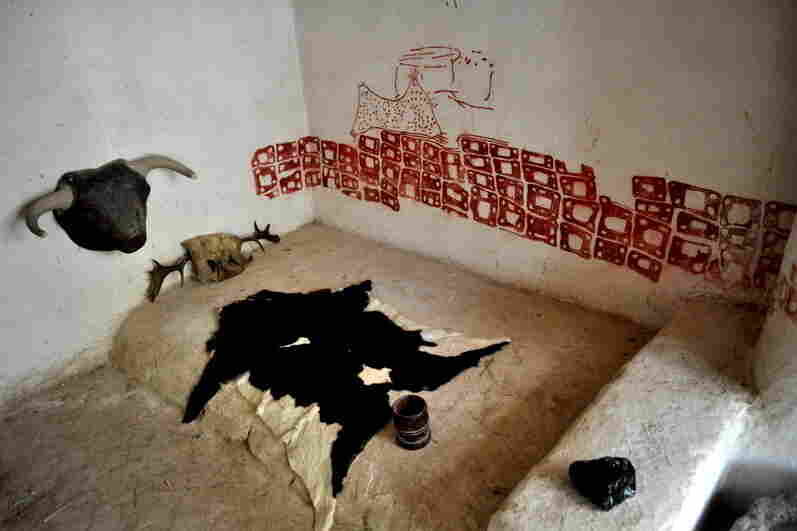 A reproduction of the mural from a room in Catalhoyuk, a Neolithic settlement in Turkey. Sarah Murray/Flickr hide caption 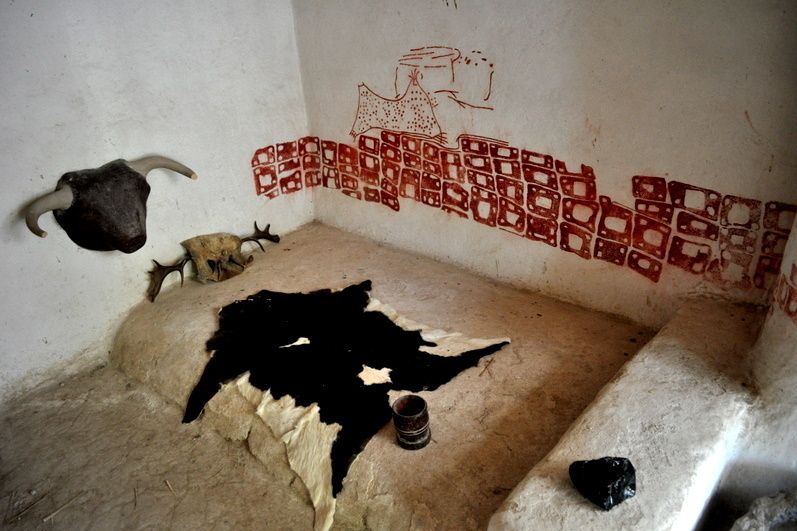 A reproduction of the mural from a room in Catalhoyuk, a Neolithic settlement in Turkey.

A more skeptical take, put forward by an archaeologist in 2006, is that this image actually isn't a map or a picture of a volcano at all. The image of the so-called volcano, which is covered with dots, looks a lot like paintings of leopard skins seen elsewhere at the site. Plus, the so-called map of the city could just be a repeating abstract pattern, like the ones painted on other walls.

And, while Mellaart had hypothesized that the twin-peaked volcano was symbolically important to the town's inhabitants because it was the source of the beautiful obsidian they used for tools, studies in the 1990s showed that it actually wasn't the source, says Tristan Carter, a McMaster University archaeologist who has worked at the site.

Schmitt says we may never know what the painter of this mural had in mind.

"You know, these people that lived in Catalhoyuk 9,000 years ago — they are fascinatingly strange to us," says Schmitt. "There is always a danger in taking our views and knowledge and trying to impose it onto a culture that is that different from ours."

But he knew at least one thing could be tested scientifically: If the image was, supposedly, a depiction of the twin-peaked volcano erupting, it would be good to know if the volcano actually had erupted while people were living at the site.

To find out, his team collected samples of pumice from the volcano's summit and flanks. They used two different dating techniques to determine when those rocks formed in an explosive volcanic eruption. And it turns out there was an eruption about 9,000 years ago — in a time frame that closely overlaps the period during which the mural is estimated to have been painted.

"There was an eruption at the time people lived in Catalhoyuk," says Schmitt. "I think that is without doubt."

The uncertainty in all the measurements means they don't know whether the person who painted the mural could have witnessed the event, he says. But stories could have been passed down for generations. 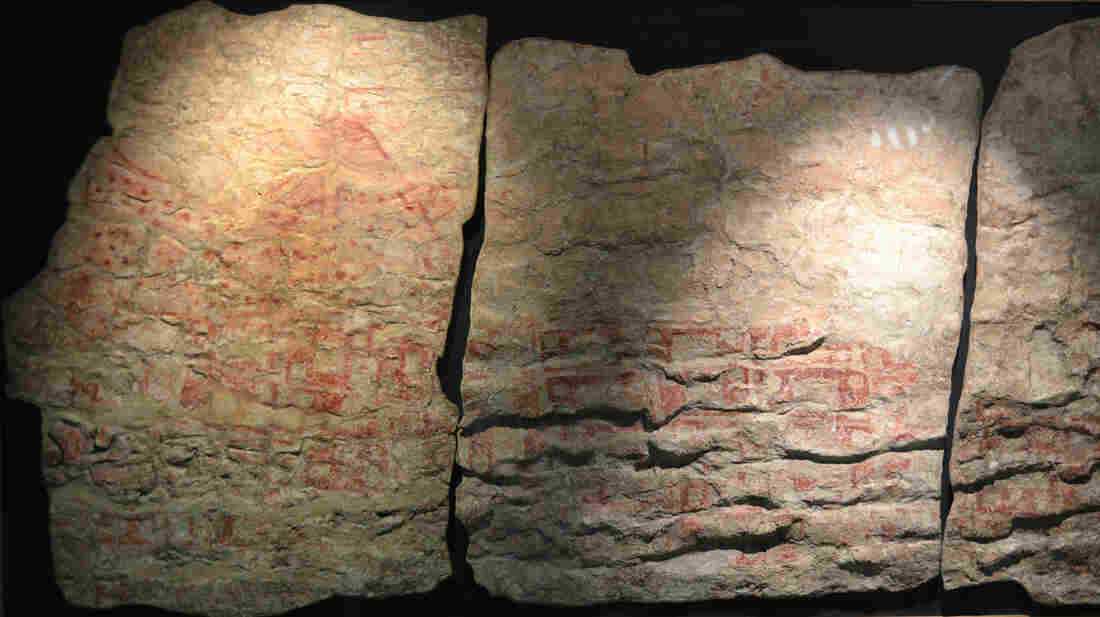 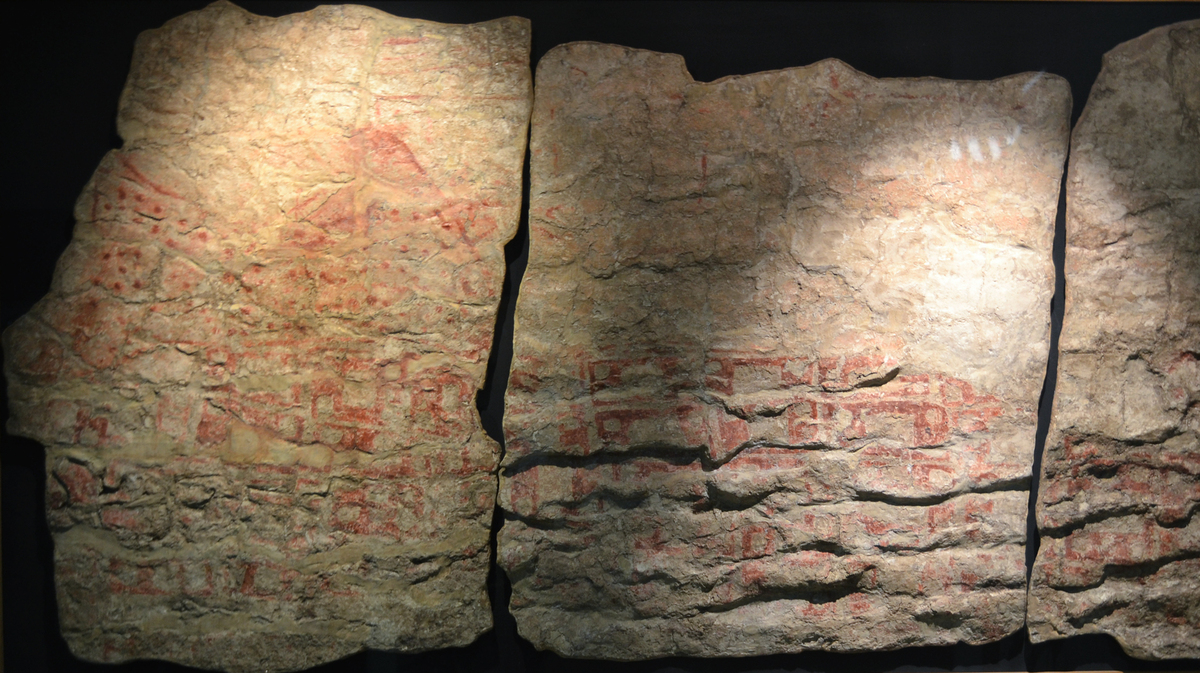 Could this Catalhoyuk mural, now faded with age, be the world's oldest map?

"Volcanic eruptions are very impressive events," says Schmitt. "Maybe there was some idea that the mountain was a volcano that was part of the lore of the people of Catalhoyuk."

Carter agrees that an eruption "would have been a huge deal" that would have been preserved through the telling of tales, songs, dances — and, perhaps, in a pictorial form like the mural. He was already leaning toward interpreting the mural as a depiction of the volcano, he says. "It is wonderful to see this paper."

The results appear in this week's issue of the scientific journal PLoS ONE. Keith Clarke, a cartographer at the University of California, Santa Barbara, who has a special interest in the world's earliest maps, says the work impresses him.

"I can't say with 100 percent certainty," Clarke says, "but I would believe that the evidence is now in ... favor of it actually being a map."

The mural is from a period that's thousands of years before other accepted maps. But Clarke thinks ancient humans weren't as primitive as many believe — and that maps probably go back even farther.